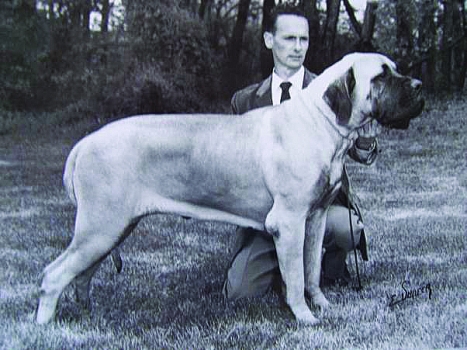 Alan Stockwell, head intact, at the Mastiff Club of America National Specialty in Yorktown, Pa., on April 27, 1968. The fawn bitch is Helena of Rainbow Mountain, which he showed for owner Lois Savage

The kennel manager for Mooreleigh shares some of its secrets

Publisher Denise Flaim’s profile of the late Marie Moore took a close look at the “iron lady” of Mastiffs in the United States. Here, Moore’s former kennel manager writes from across the pond to clarify a few points – and share some recollections of his own, not all of them Hallmark moments.

I was very taken with your magazine, Modern Molosser, and read with great interest your article on my old boss, Marie Moore. You did your research well, and your look into her early life was very informative. There are, however, just a couple of things that I would like to put straight, if I may?

I was actually with Mrs. M. two years longer than it states in the article. I came back here in 1970; in fact, my youngest daughter, Stacey, was born at High Hope in that year.

I met Mrs. Moore during my first spell in America, when I ran the Downsbragh kennel of W.W. Brainard, in Marshall, Virginia. During this time I got to know Mrs. M., and my wife Pat and I would go to her High Hope Farm on social visits. When my contract at Downsbragh expired, I did not want to renew it and came home. Mrs. M. wrote to me several times asking me to go back and work for her. Pat was dead against it, but finally agreed to go.

When she met us at the docks in New York, Mrs. M. put her arms around me and said, “I am not hiring you, I’m adopting you.” When we arrived at High Hope, there was a brand-new Chrysler, in my name, awaiting me. In the article it says she bought me a new car every two years; she actually bought me three cars in the eight years I was there. …

I smiled when I saw the photograph of me with Falcon of Blackroc, and noticed that I had lost half of my head! I consider that I got off lightly as, when Mrs. M. used that photograph for her Christmas card, she had me airbrushed completely out!

Falcon was a particular favorite of mine. I always thought he was a far better Mastiff than his brother, Rhinehart. Falcon had great conformation and a very good head. He was not as tall as Rhinehart, but was better built and had good angulation in his stifles, which enabled him to move with freedom. He was, however, as daft as a brush. He could not be without one of those rawhide bones, which he constantly hooked behind himself with a front paw and then whipped round and kicked the other way. Worked himself into a lather in a hundred-degree heat! When he finally ate it, covered in mud, blood and slime, you had to throw him another one, or he would run backward and forward along his fence all day.

Mrs. M. told me that Falcon was no use as a stud dog, but he sired two beautiful litters of brindle pups with a little help from his friends, Pat and me. I had a rack made that you could secure the bitch on (shades of bondage here!) and that left you free to manipulate the dog. Falcon and I got on well together, and when we had the bitch on the rack I said to Pat, “Hold on while I fetch another lead.” When I came back she said, “I would not have believed that if I hadn’t seen it with my own eyes. Here he is with a bitch in season, and when you went out, he stood with his nose on the door waiting for you to come back!” That was Falcon.

Falcon’s first litter was out of a brindle bitch that Mrs. M. acquired on one of her buying sprees. When she brought her home, I took to her on sight, so she got to stay around. I called her Bergen and, as far as I was told, her name was Ch. Werburga. She produced six lovely brindle puppies and, later on, Mooreleigh Rachel had four brindle puppies by Falcon.

The Falcon/Bergen litter I lead-broke, took them out on the road to get them used to traffic and people, and trotted them up and down, then stacked them for Pat to go over. Not one of them left the place. So with the Falcon/Rachel litter I never bothered.

Rhinehart was a favorite of Mrs. M. For my part, I wasn’t keen on his head or his temperament. When I first arrived, he wouldn’t let me into his kennel. He soon learned that mine was the hand that fed him, and he pretty much wanted to eat. Marie Moore with the two brothers that formed the backbone of her Mooreleigh Kennel: the fawn Rhinehart and the brindle Falcon.

Mrs. M. kept eight dogs in the house. Four Mastiffs, a Chihuahua, two mutts and a mad Boxer, Buddy. The Boxer would attack anything and anybody; several times I had a chair between me and him when he had one of his turns. My afternoons consisted of walking the fields with Mrs. M. and the house pack.

My own house dog was Toby. He was a mongrel that was brought by a dog warden into Mrs. M.’s dog shelter while I happened to be there. I said to Ollie, who took care of the shelter, “I’ll take him, Ollie,” and so Toby spent some happy years with us. When our first daughter, Samantha, who was born at High Hope in 1968, was old enough to sit in her highchair, Toby would sit beside it and very little that she dropped ever hit the floor. When I picked up the car key, he was across the yard and in through the open car window before I got out the door.

I shed a few tears when I put him to sleep the night before we left to come home. The thing that no one knew is that I carefully opened the grave of Gallorette (the champion race mare that Mrs. M. had owned) and laid Toby to rest with her. Gallorette had an imposing grave beside the clover-shaped swimming pool, complete with a large headstone that proclaimed: “Gallorette. The Greatest Mare in the History of the American Turf.” The champion mare and a mutt from the sticks still rest together, as far as I am aware.

Eventually our relationship had run its course, and I gave a month’s notice. The week prior to our leaving Mrs. M. said to me, “The day you leave I shall have all of your dogs put to sleep.” Ironic that she should refer to them as “my dogs,” but she knew how attached I was to them. True to her word, on the morning we left, the vet arrived early and started putting the dogs down. I think he got there early so that I knew that she was keeping her promise. Of course, I never did know just how many of the dogs were put down, but I did see that the first kennel he went into was Bergen’s. I have always consoled myself by thinking perhaps it was just a token number.

Then Mrs. M. appeared at our house to say goodbye to Pat – strange, really, as way back when we first arrived, she had suggested sending Pat back home. I can still see them standing there with their arms round each other, tears running down their faces. Pat cried when we left England, and cried when we left America. She didn’t want to come, and she didn’t want to go. Then, turning to me, Madam said, “Alan, you will never work in America again as long as I live.”

We had become friendly with Lois and Roy Bish, who had Mastiffs in Gettysburg, Pennsylvania, and they took the time and trouble to transport me, my wife and three children (two of them born at High Hope) all the way to New York, and saw us safely onto the QEII. I’m happy to say that Lois and Roy remain our friends, as does the very talented breeder/handler Damara Bolte. Damara was once kind enough to say that I was a loss to dog showing, but, to be honest, I haven’t missed it for one minute. Once back in England, I started work for the Royal Society for the Prevention of Cruelty to Animals. After eight years at High Hope, it was a breeze.  -- Alan Stockwell, Reading, Berkshire, United Kingdom

© Modern Molosser Magazine. This article may not be reposted, reprinted, rewritten, excerpted or otherwise duplicated in any medium without the express written permission of the publisher.
Thu, 11/19/2015 - 12:16am