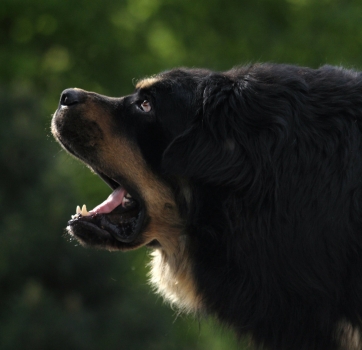 Defining Tibetan Mastiff breed type
By
Richard Eichhorn
Tibetan Mastiff breed type has been the source of decades of internal conflict and controversy in international Tibetan Mastiff communities. It is also the reason why this most ancient of breeds did not enter the AKC until 2007.
While each breed of dog has variations, the differences in the Tibetan Mastiff world could be described almost as breed differences, not just varieties within a breed. At the very least, we are talking about two, perhaps three or more distinct varieties in the breed, defined by size, type, color and coat differences, which could (or should?) compete for separate breed ribbons. This presents a confusing and frustrating situation for judges, who are forced to either put up a homogenized and safe Working dog that somewhat incorporates the best of the varieties present, or to select the best of his or her preferred type.
When mentoring, the number-one question I am asked is: Why is there such a great variation in size and breed type in this breed?
Simply stated, it is a collision between the Eastern/native need for function versus the Western need for a single, identifiable breed type. Native breeders and owners prized and bred for function and a flock guardian character, with less regard for consistency in size, type, color and coat. And with the extreme isolation of breeding populations of dogs in Tibet due to the harsh climate and treacherous terrain, remote villages would often each have their own version of a Tibetan Mastiff.
Historically there are documented separate varieties/sub-varieties of Tibetan/Himalayan dogs (Tsang Khyi, Do-khyi, Lion, Tiger, Snow, Himalayan Sheepdog, Bhotia, Bangara Mastiff, etc.) that have come to be identified as those used to resurrect this breed and save it from extinction after the Chinese occupation of Tibet in the 1950s. All those influences appear in contemporary Tibetan Mastiff studbooks and are now all classified under one “Tibetan Mastiff” umbrella. In its native land, the Tibetan Mastiff – now known throughout FCI countries as the “Do-Khyi,” in China and Tibet as the “Zang-Ao” (Tibet Dog), and in Taiwan as the “Ao-Chen” (Dog of Tibet) – was not found to be that standardized in appearance/phenotype as we have come to expect in Western dogdom. 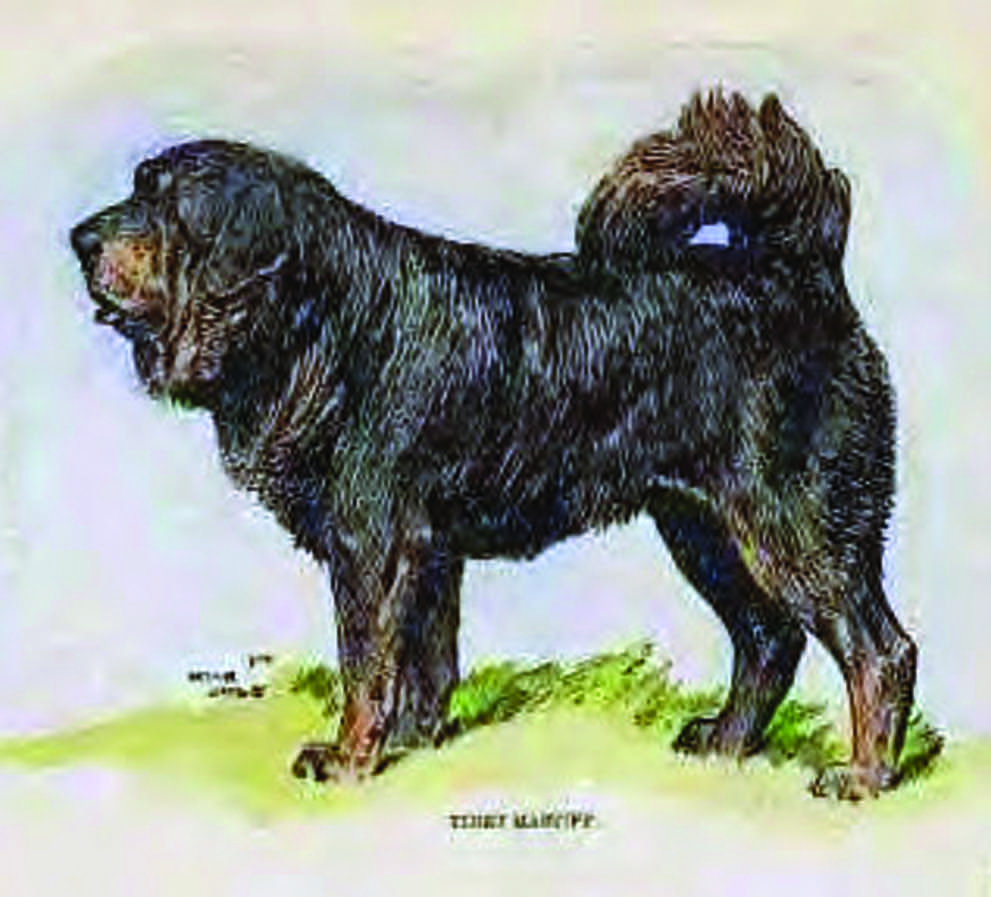 By the famed British animal painter Arthur Wardle, showing the ideal outline and proportions for the breed. Today, with more length of neck and the profuse mane and feathering that come with maturity, this dog would regularly be seen in the winner’s circle.
The reason for this is simple: Traditional Tibetan dog breeding was the result of geographic patterns and subject to climate extremes, rather than the intentional, thoughtful breeding process we associate with dog breeding today. The nomadic life of herdsmen was not conducive to developing a breeding program, and breed type (appearance) was not the main concern of the nomads. Function, based on physical soundness, and a strong guardian disposition were the two most highly sought after and prized traits in the dogs. Genetics were neither completely understood nor readily employed by the early Tibetans in their production of dogs; therefore, they failed to arrest the tendency of type variation that can be controlled by selective breeding programs now practiced in the West. Thus, dissimilar types and varieties developed in different regions.
Those differences (mastiff vs. shepherd/mountain dog) are still plainly seen in different breeding programs and regional populations today. To better explain this discrepancy, in 1901, Mr. L. Jacob spoke of his most recent trek into Tibet:
“A group of twenty Thibetan (Mastiff) dogs might be taken at random, and if arranged in line, the most mastiff-like animal at one flank and the most sheepdog-like at the other, the rest being sorted in between by gradation, it would be absolutely impossible to say where the one variety ended and the other began.”
Yet, in his words, the difference between the most “mastiff-like” and most “sheepdog-like” types of Tibetan Mastiffs he describes are no doubt great, to say the least, with tremendous differences in type and size, and even color and temperament. The same holds true today, more than 100 years later! The two most often seen and historically documented varieties of Tibetan Mastiffs that Mr. Jacob spoke of are known today as the Tsang-Khyi and the Do-Khyi, the former considered to be the finest, largest and most prized dogs, the latter the more commonly found smaller working variety. The best description of the mastiff Tsang-Khyi variety was given by Mr. W. Gill in his narrative of a journey through China and Eastern Tibet to Burma in 1880:
“The chief had a huge dog, kept in a cage on the top of the wall at the entrance. It was a very heavily built black-and-tan, the tan of a very good colour; his coat was rather long, but smooth; he had a bushy tail, smooth tan legs, and an enormous head that seemed out of proportion to the body, very much like that of a bloodhound in shape with overhanging lips. His bloodshot eyes were very deep-set, and his ears were flat and drooping. He had tan spots over the eyes, and a tan spot on the breast. He measured four feet from the point of the nose to the root of the tail, and two feet ten inches in height at the shoulder [34”!]. He was three years old, and was of the true Tibetan [Mastiff] breed.”
This presents a very clear, descriptive picture for us today in reference to type and specific cross-referencing pertaining to giant size and extremes associated with mastiff type. The largest Tsang Khyi type of dogs were often found in the monasteries serving as stationary guardians, gifts to the monks so that the owner might find favor in God’s eyes. Others were sold to the wealthy as courtyard guardians, as few people could afford to feed such a large animal, while the smaller, more common shepherd-like Do-Khyi remained in the villages, in the pastures, with the caravans and on the trail with the nomads functioning in more of a livestock/flock guardian capacity. The first imports that reached U.S. shores some 40 years ago were from this wide, overly diverse gene base, varying in type, quality, authenticity and even purity depending upon their area of origin and the influence of other environmental factors. While these early U.S. imports represented the myriad of varieties referenced by Mr. L. Jacob in his narrative, the majority of present day Tibetan Mastiffs can now begin to be classified in the two distinct types of dogs historically known as the Tibetan Mastiff: the mastiff-like Tsang-Khyi and the mountain/shepherd-like Do-Khyi. Although the gap between the two types was often blurred and is bridged through the blending of contemporary bloodlines, a wide range of differences can still be seen in size, breed type, coat, color and at times, temperament. 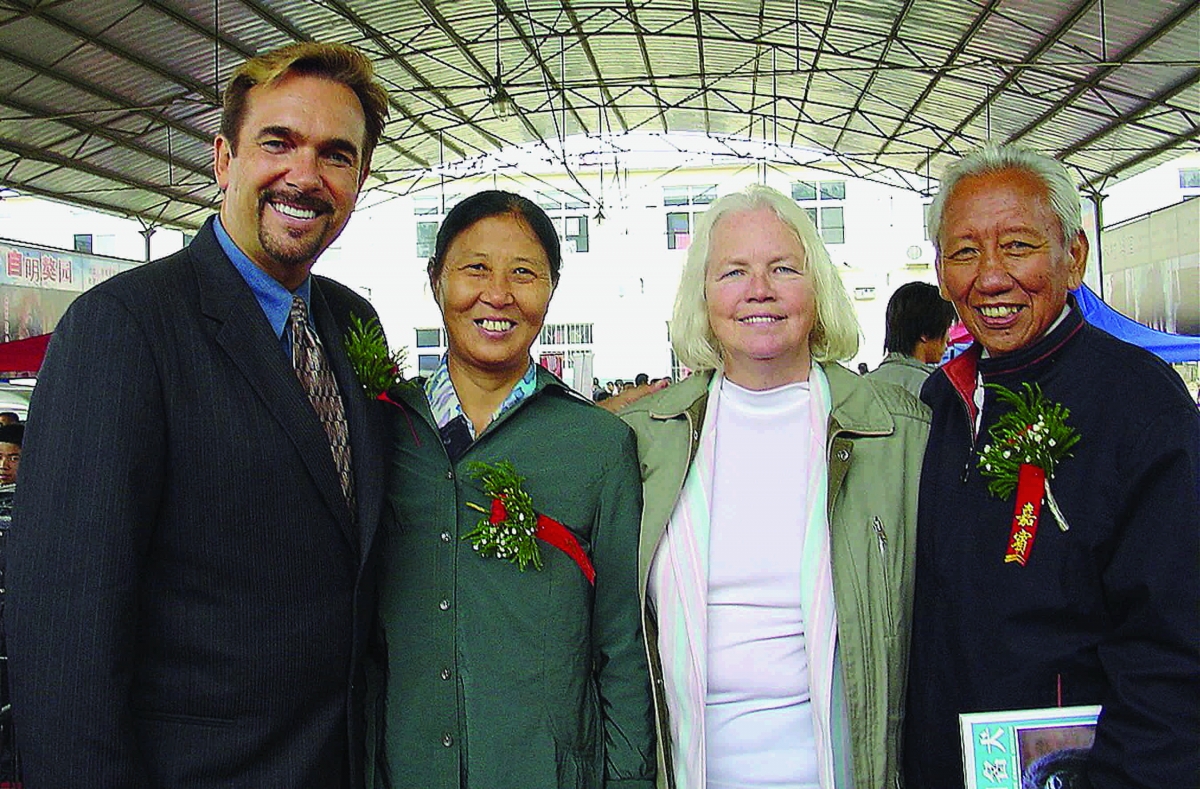 Rick Eichhorn, Mrs. Lou Go, Carolyn Alexander and Mr. Luo Go.
It was during my 2007 trip to judge a Tibetan Mastiff Specialty in Anyang, China (my Best of Breed/BIS was actually awarded a car!) that I had the great pleasure to meet the former Mayor of Lhasa, Tibet, Luo Go. At some 70 years of age, he had been born in Tibet, lived there all his life, and had owned and bred Tibetan Mastiffs before, during and after Chinese involvement there, even to this very day.  And while my 30-plus years of breeding, owning, handling and importing every major bloodline in the world today gave me a broader and more global base and perspective on the breed, this was the Holy Grail for me, a man who had actually lived his life in the presence of the “true” breed in the heart of its native land. 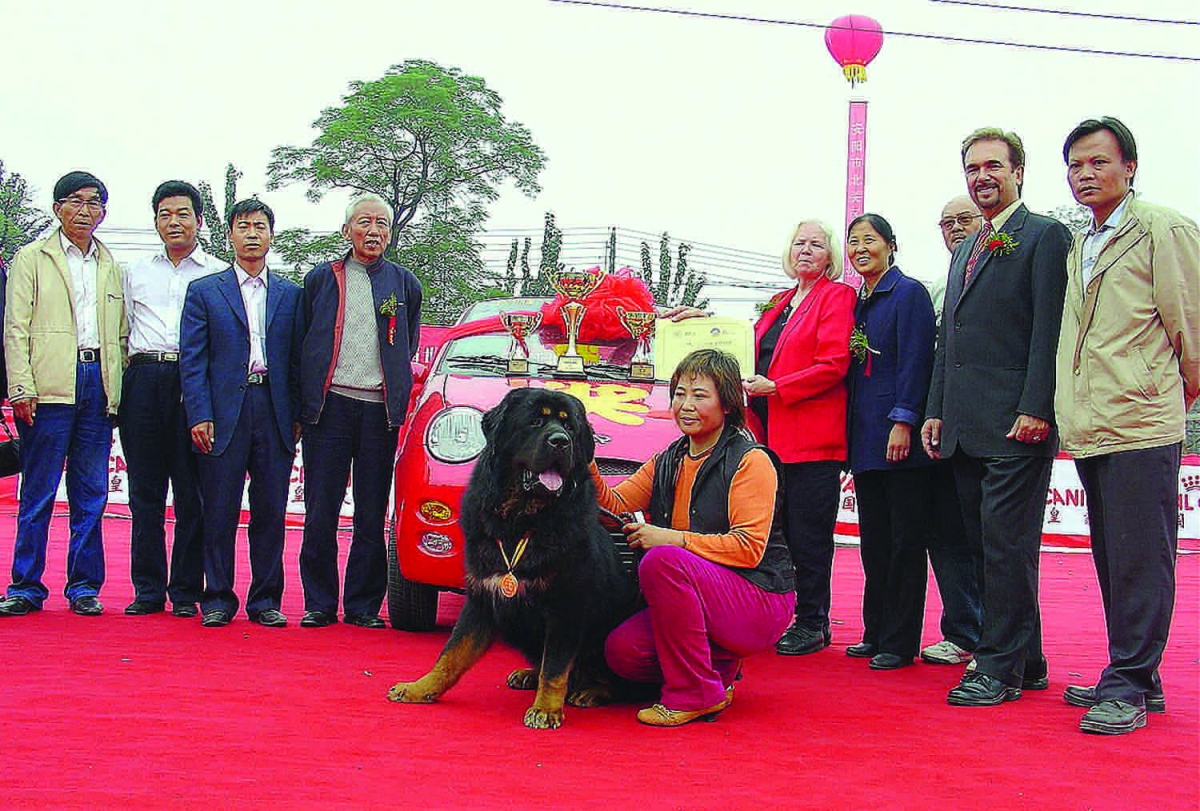 As I readied to award Best in Show, I asked for the rosette or trophy. I was then informed, "It is the red car outside the ring!” Pictured: The “father of the Tibetan Mastiff in China,” Wang Zhankui (far left); the Mayor (left of car); the breeder/owner of the BIS (center); fellow judge Carolyn Alexander; Mrs. Luo Go; me, and FCI breed specialist from Taiwan, Tibetan Mastiff breeder Wu Shinn-Shyong (far right).
No more opinions or mere conjecture, these were the facts.  I just needed my stone tablets to record his words of wisdom. I gladly became the student as we spent that week together as honored VIPs, and then another week in 2008 as invited guests to the opening of a new, multimillion-dollar kennel, exclusively featuring dogs from Tibet proper or from populations bred by Tibetan nationals on the Qinghai Plateau in China.  My views on the breed and what I had known were challenged, redefined and affirmed all at the same time.
Click or tap here to read the article he entrusted to me to share with the Western world, along with supporting photos that represent the dogs he describes.
© Modern Molosser Magazine. This article may not be reposted, reprinted, rewritten, excerpted or otherwise duplicated in any medium without the express written permission of the publisher.
Thu, 07/05/2018 - 11:01pm