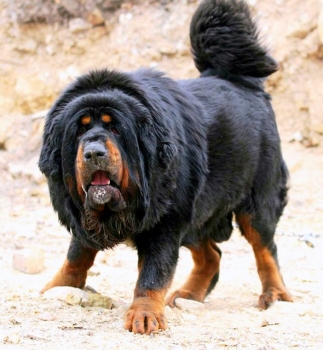 Straight from the Source

Tibetan Mastiff type and conformation in Tibet
By
Luo Go
Translated by Wu Chengmin, Tibetan Mastiff Research Center, Gon Yi, China
The Tibetan Mastiff is an original breed with substance and bone, four strong and sturdy limbs with powerful muscles and substance, with no excess of body mass under the skin. All these traits are geared to the extreme high and frigid climates. They have strong reproductive capacity and immune systems, and are late to mature. They grow a profuse coat of weather-resistant hair, with heavy undercoat for insulation.
For thousands of years, the Tibetan Mastiff has thrived in the harsh natural environment of Tibet with minimal resources. People have not interfered with their breeding systematically, so there are not obvious outside influences, nor extreme variations. Therefore, this kind of dog has been preserved as an ancient and original breed.
In spite of this, they can vary in type. To some degree, the difference of physical structure and type are a result of environment because of the terrain, ecology and management in rearing puppies, influenced by available resources and the social economy. The following explains the different types of Tibetan Mastiffs in Tsingzang Plateau, according to their type, structure and function. 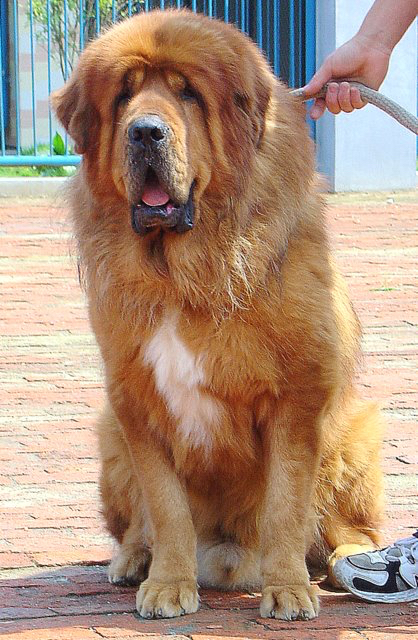 (abbr. “Tsang Khyi”)
In Tibet, the Valley Tibetan Mastiff, or Tsang Khyi, is mainly found and produced in mountainous regions of the south, in Tibet’s Autonomous Districts of Cuomai, Jiazha Sanru, Cuona and Longzi, all counties with high mountainous valley pastures.
In the mid-19th Century, in Charles Darwin’s book “The Variations of Animals and Plants Under Domestication,” Darwin praises the “enormous black mastiff” living in southern Himalayan mountain regions of Tibet. Here he no doubt refers to the large Tibetan Mastiffs known to be found in that same region.
Commonly, our Tibetan people call it the Tsang Khyi, referring to the very large size and particularly fine and preferred type of the variety. This kind of Tibetan Mastiff is prized for guarding and overseeing property, and for its beautiful, preferred type. Frequently, we tie them to the gate or both sides of the tent to serve as a sentry, or “do-khyi,” when intruders approach.
The size of the most outstanding adult male is more than 75 cm (29.5 inches), with adult females averaging 70 cm (27.5 inches). They have a very big head and the pronounced occiput, thick and longer drooping ears, deeply set triangular eyes that show red haw when angry, with the upper lip hanging and pendulous, open flew at the back corners of the mouth, the obvious full mane to the withers and a broad straight back, gently rising to a tapering and narrowing rump, with a slight tuck up in the abdomen. The colors for this variety are black and tan (“Jiama”) and solid black (“Dongma”), allowing some white markings. The gold, parti-color and dilute gray, as well as others, are colors that indicate blending with other types of Tibetan Mastiffs, or cross-breeding with other Himalayan dogs. 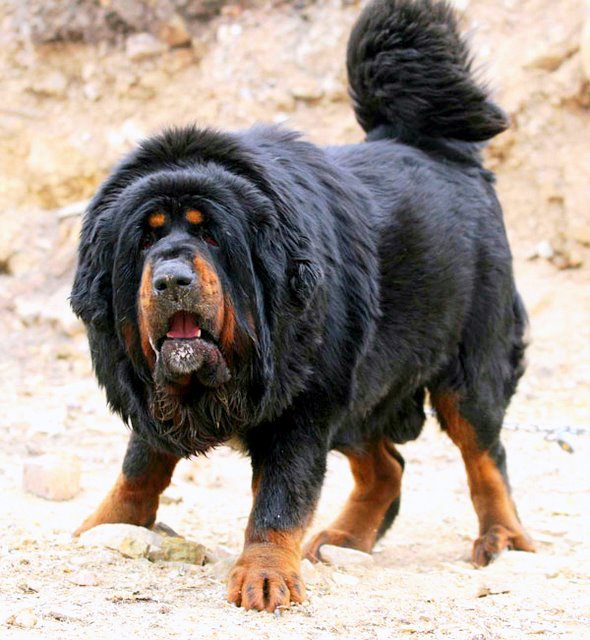 The prevalent features of the Valley or Tsang Khyi Tibetan Mastiff are:
1. Special ability for property protection
Because of the Valley Tibetan Mastiff’s larger and sturdy physique and longer time of domestication, Tsang Khyi’s head and upper lip becomes more and more pronounced and pendulous with age, making it increasingly less able and suited to confront predators.  Therefore, the Valley Tsang Khyi should not go with the flock and shepherd. For thousands of years, the Valley Tsang Khyi Tibetan Mastiffs have not belonged to the flock-guardian variety. Their value is in domestic watchfulness, and to be enjoyed by the family. This type of Tibetan Mastiff is faithful to his master and the master’s domesticated animals. They not only recognize and accept people, but will accept strangers interacting with their master’s family. However, they will not tolerate any unknown animals near their master’s animal or home, particularly at night. They stay alert and watchful throughout the night, patrolling their home property.
Once they encounter an intruder or new situation, the master can identify if the newcomer is a beast or a stranger according to the sound of the bark, and can also detect the direction and distance so as to be prepared to take the most effective measures. Once the territory is breached, all of a sudden the Tsang Khyi will rush toward the stranger and sniff to identify.  At that moment, if the stranger keeps still, he will be safe. Otherwise the Tsang Khyi will bite down and hold onto the stranger, with as much discretionary force as needed until the master comes.
2. A high value for enjoying the visual appearance and behavior
The peculiar voice of the Tsang Khyi type is sonorous, rugged and very deep. At any time, the Tsang Khyi uses different sounds to alert the master to the exact information and different distances between the Tibetan Mastiff and the stranger. The Tibetan experts hold the view that the Tsang Khyi’s bark has a strong rumble that other mastiff types don’t have. The inheritance of that special sound is very consistent and dominant in the Tsang Khyi. Although there can be degradation of the bark with the crossing of types of Tibetan Mastiff, the offspring of the pure Tsang Khyi will be evident to the ear with their sonorous, deep and pleasing sound. Indeed, it is very important and most valuable to preserve this distinct type and sound. 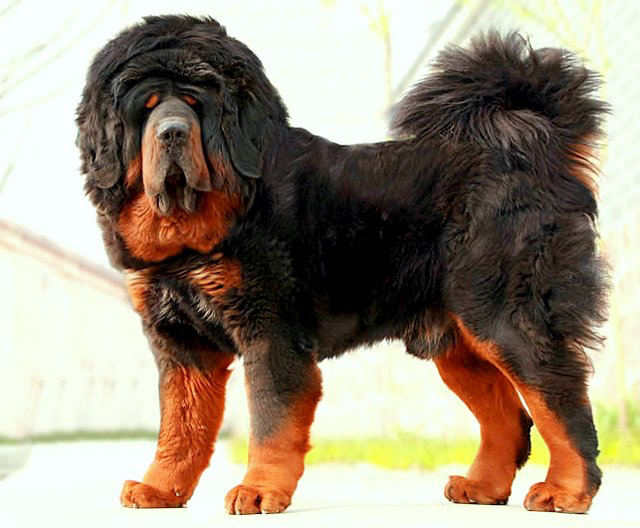 It’s is vital for us to value and preserve the pure Tsang Khyi Valley type of Tibetan Mastiff and to respect and protect their age-old traditions. Also, careful selection and using genetic data must be employed to make the best breedings come to fruition by constantly searching for the right combination of this type. With the changing world the Tibetan Mastiff must live in, and its changing role with mankind, this topic is a sparking point for necessary discussion.
An important reminder again, unique and crucial to the type, the sounds the Tsang Khyi makes change when the distance between the dog and stranger changes from far to near. The sounds of the Tsang Khyi change and progress with intensity while seated and when standing, then while walking and while running. When a stranger passes by the Tsang Khyi, a tethered Tsang Khyi will lunge and strain at the end of the chain, the neck compressed and choking, the eyes showing blood red, the gnashing of teeth, and in the moment we only hear the ragged, hoarse voice and panting breath. All of this an indication of the ferocity. While the whole process is heart-pounding, ultimately the result is that we can enjoy feeling secure, relaxed and carefree. It is exhilarating to watch. 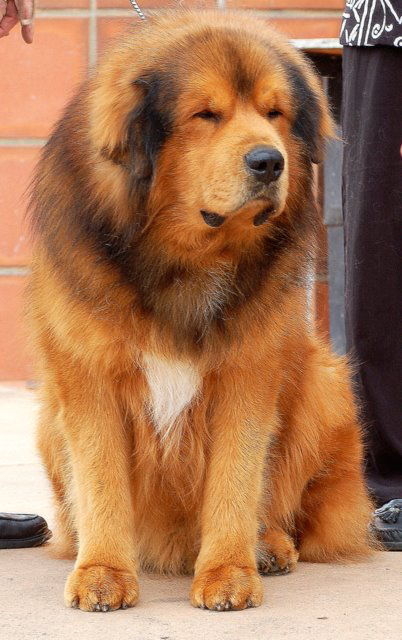 The Plateau Tibetan Mastiff, or Dro-khyi

(commonly misspoken as “do-khyi,” which is a common term for any tied guard dog of any breed or street dog in Himalayan regions).
The Plateau Tibetan Mastiff, or, as some people say, the Pastoral Dro-khyi Tibetan Mastiff, can be found in the Gannan Tibetan Autonomous State, Tsinghai Province and Cichuan Zang district. The Tibetan Mastiffs of Hequ are some of the most typical representatives of the outstanding variety known as Plateau Dro-khyi Tibetan Mastiffs. According to the study of Mr. Cui and Mr. Yang from the Agricultural College of Gansu, this kind of Tibetan Mastiff is found primarily in the Hequ area. The Tibetan people call them Dro-khyi, meaning “Tibetan Mastiff living on the prairie or grassland.” The main features are the following:
1. Large size, sturdy strong body and bone with coordinated and balanced moment. An excellent adult male is a minimum of 73 cm (28.75 inches), and should be much taller. The adult female is well over 65 cm (25.5 inches). It has a large head and a prominent peak to the skull. Its ears are smaller than that of Valley Tsang Khyi. The upper lip is hanging, pendulous, dragging. In the neck and face a minimum of two prominent wrinkles. The back is broad and level, rising to an evident point of the shoulders. A moderate tuck up. The tail is spiral and up over the back.
2. The colors are mainly black and tan, black and golden. Other colors such as gray or white are found, but more in cross-bred dogs.
3. The coat should be of high volume and length in places, strong quality, cold-weather resistant.
4. On the prairie, the character of the Tibetan Mastiff is formidable and always alert. He is very loyal to his master and does his work.  He will display very strong protectiveness and can be violent against intruders, daring to fight against wild animals. He has a keen ability to watch the flock. He can be on duty the entire night, walking around the house and property, protecting and maintaining the security of humans and livestock.
5. The Dro-khyi, or Plateau Tibetan Mastiff, is has a thinner and higher-pitched bark than the Valley, or Tsang Khyi, Tibetan Mastiff. While penetrating, it is not as resounding or pleasing to the ear. It is a sturdy dog, with thicker wrinkles on the neck and face than those found on the Valley or Tsang Khyi Tibetan Mastiff. This indicates that there exist complementary traits to be blended between the two types in a breeding program, a strategy for the selection of future generations of breeding. 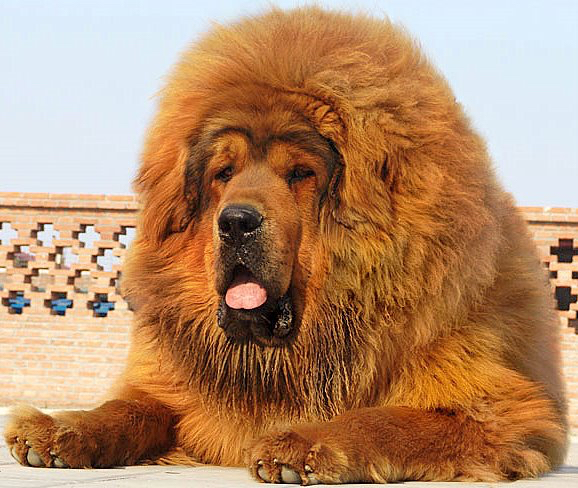 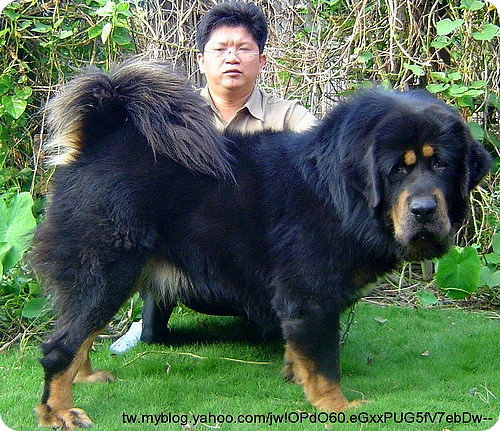 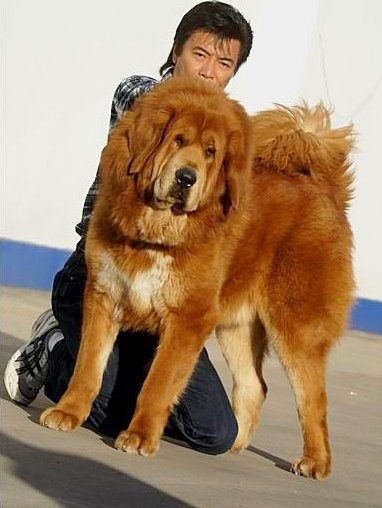 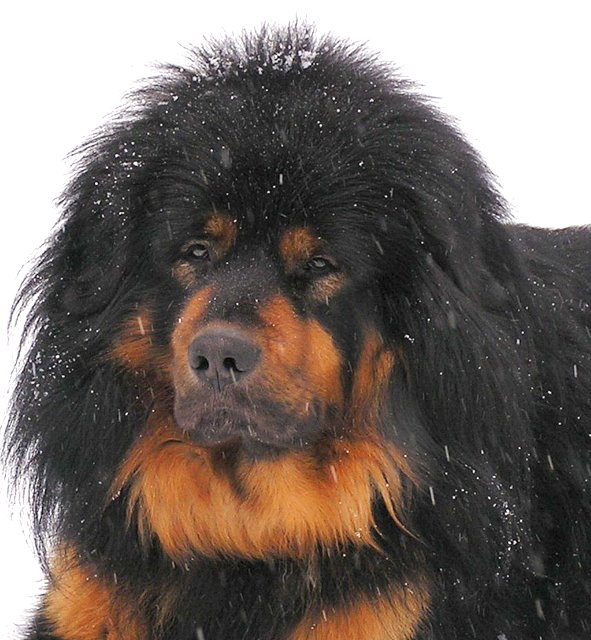 It’s difficult and scarce in Tibet to find the lesser known and pure, long-coated Lion Tibetan Mastiff, although it has wide distribution in some places. It mainly originates from Shangnan, A’li, Changdu, Tibet and is found with Diqing Shepherds in Yunan, China. (It is also more common in some Western kennels.)
This type is very alert, can be aggressive and is conscious of guarding for shepherds, and is usually a tied guard/do-khyi at the gate or at both sides of the nomad tent. The outstanding adult male Lion Tibetan Mastiff has a maximum of 70 cm (27.5 inches) at the withers, females a maximum of 65 cm (25.5 inches). They have a rounder head, a big and short muzzle with tighter lips, a broad back and longer body. 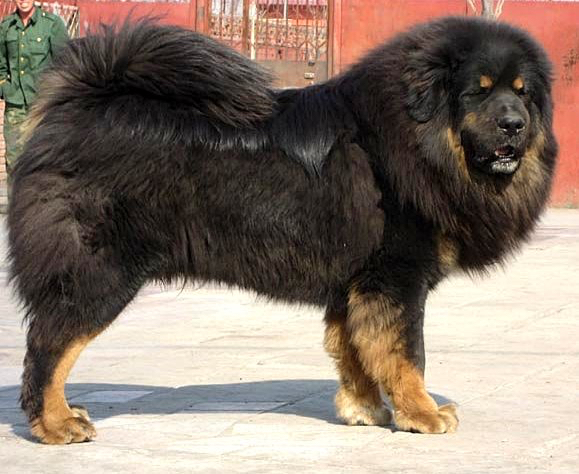 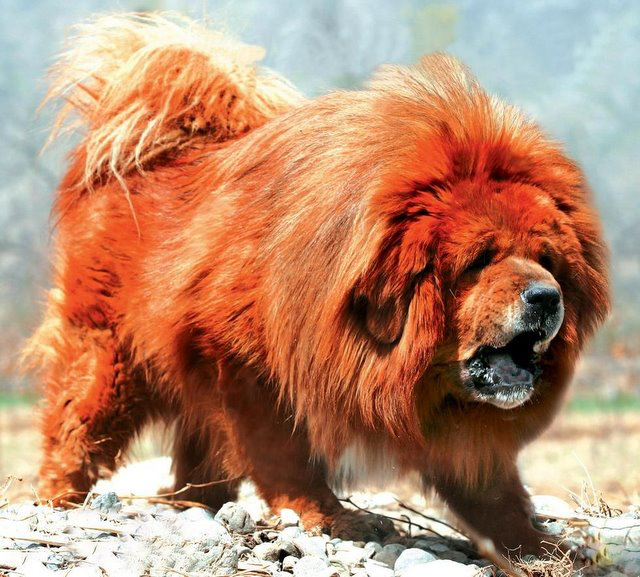 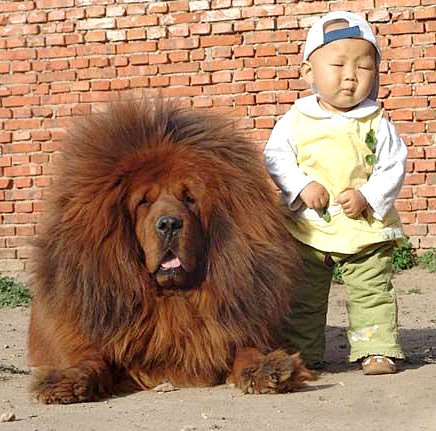 The point of the withers is not evident due to the excessive long hair (like the Chow Chow). The hair covers the entire body. The color is mainly gray, gray and tan, black and tan, and black. Lions in white and yellow colors are usually crossbred Lion dogs with Dro-khyi or other Himalayan dogs. 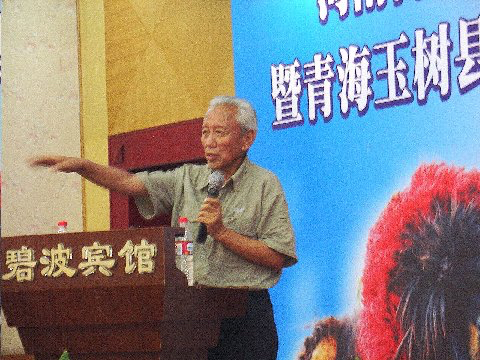 Mr. Luo Go, lifetime resident and former Mayor of Lhasa, Tibet, is the most longstanding Tibetan Mastiff authority in the world today. At more than 70 years of age, he has lived his entire life with Tibetan Mastiffs in his home. His unique perspective, the result of many decades of experience as an owner and breeder, are of the breed in its native land – before, during and after the Chinese occupation of Tibet that began in the 1950s.
© Modern Molosser Magazine. This article may not be reposted, reprinted, rewritten, excerpted or otherwise duplicated in any medium without the express written permission of the publisher.
Mon, 08/27/2018 - 6:14pm