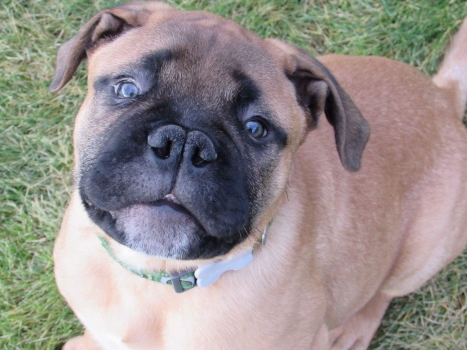 When is more not more? When you’re talking about a bifid nose in Molossers, for starters.

Also known as “double noses,” “split noses” and “cleft noses,” bidfid noses are divided, resembling the double barrels of a shotgun. Bifid noses are desirable in a handful of pointing breeds, among them the Old Spanish Pointer, or Pachón Navarro; the Turkish Pointer; the Catalburan, and the double-nosed Andean Tiger Hound (I’m not making that up).

Those exceptions aside, many breeds perceive bifid noses as an unwanted anomaly, such as in Great Danes, where a split nose is a disqualification according to the American Kennel Club standard, though judge and breeder Nikki Riggsbee of Valrico, Florida, says she has never seen one in more than 35 years in the breed. Bidfid noses do surface in some traditional Molosser breeds, including the Bullmastiff, where they are equally as unwelcome. 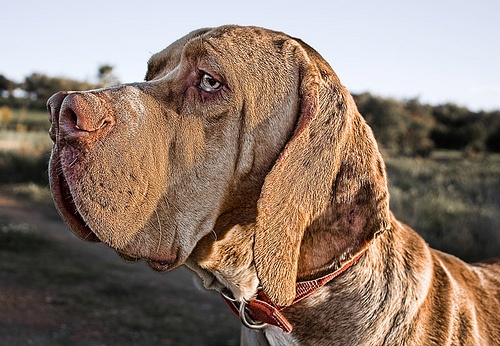 Top and bottom: Bifid nose in a Pachón Navarro, a Spanish breed in which this unusual divided nose is desirable. 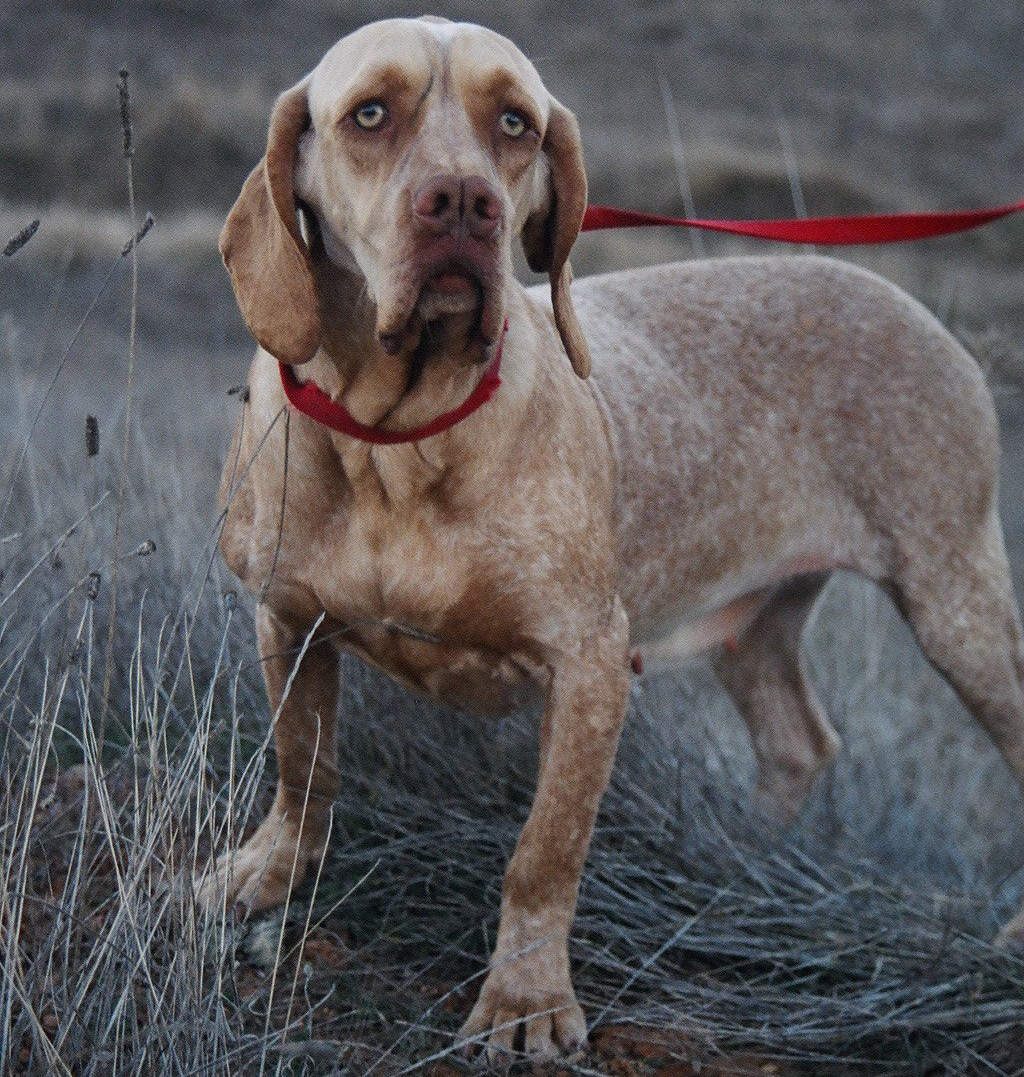 “I think bifid noses are fairly uncommon in Bullmastiffs, but they do happen,” says veterinarian Teri Winston of Icon Bullmastiffs in Canby, Oregon, who knows firsthand, because she bred one.

“No other puppies in that litter were affected, and the affected puppy did not have a cleft palate or lip,” she says, adding that he was structurally very sound. Aside from having a very rounded maxilla, or upper jaw – Dr. Winston likens it to the shape of a spoon – he had no nasal-sinus issues. “But due to the possibility that there was a genetic cause, he was sold as a pet, never to grace the show ring or to be used for breeding,” she says. “As a veterinarian and breeder, my affected puppy was my inspiration to learn more about this defect and to spread the word so others are aware of it.”

Dr. Winston notes that bifid noses are congenital – that is, they are seen at birth. “They can appear as a single, isolated defect where the nostrils are literally separated into two distinct nostrils, or they can be seen in combination with cleft palates,” she says, adding that, like clefts, bifid noses are a midline defect. In the Pachón Navarro, where a bifid nose is desirable, an estimated 10 percent of puppies are euthanized at birth due to a severe cleft palate. And many of the surviving puppies also have cleft palates, though most are minor enough that they do not impede their day-to-day life. 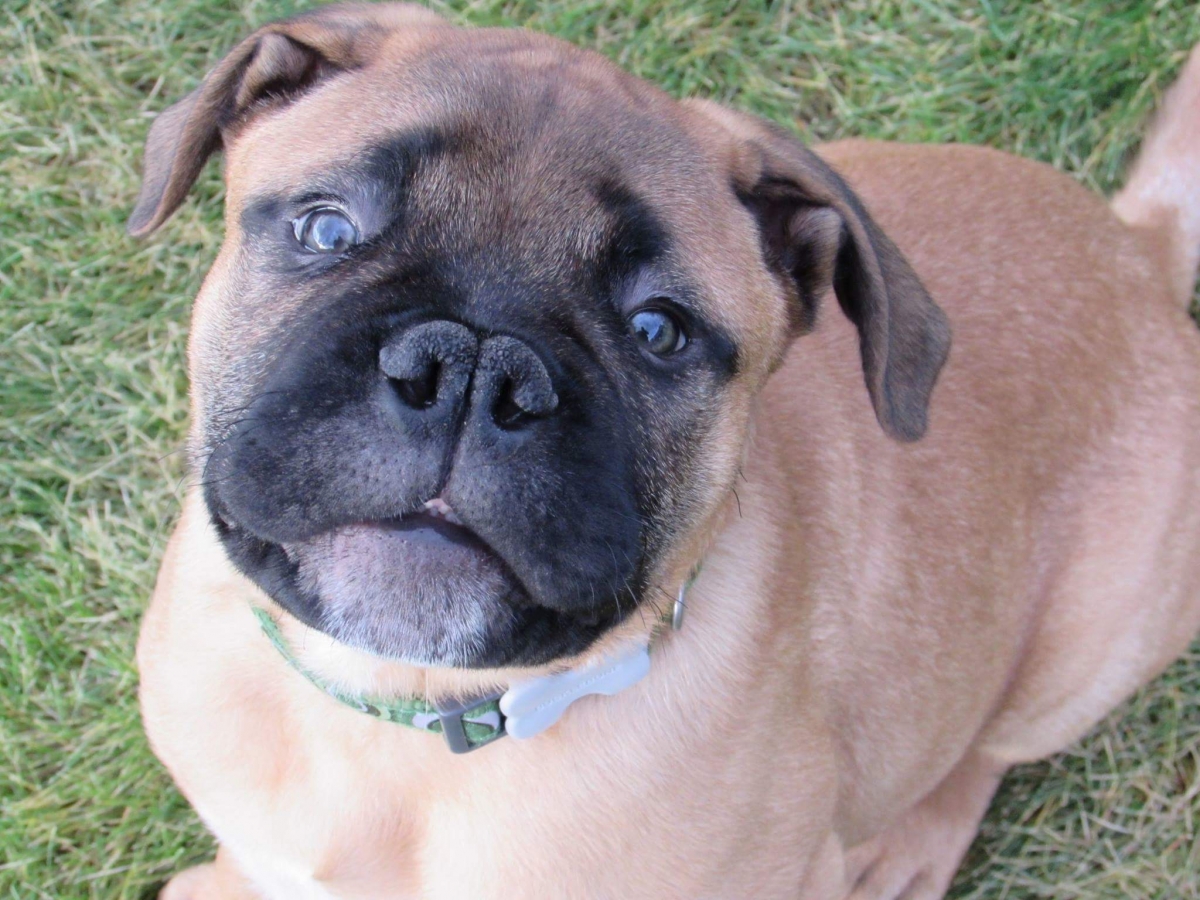 Midline closure defects in dogs can range from the subtle – like a bifid nose – to the not so subtle, such as a cleft lip or palate, spinal bifida or a puppy born with its intestines outside of its abdomen.

In a cleft lip, the maxillary and medial nasal processes are not joined, forming a groove or fissure in the lip. In a cleft palate, the palate, or roof of the mouth, has similarly not fused properly. Cleft lip and palate occur twice as often in males as in females. In humans, clefts are considered genetic even if no family members are affected. 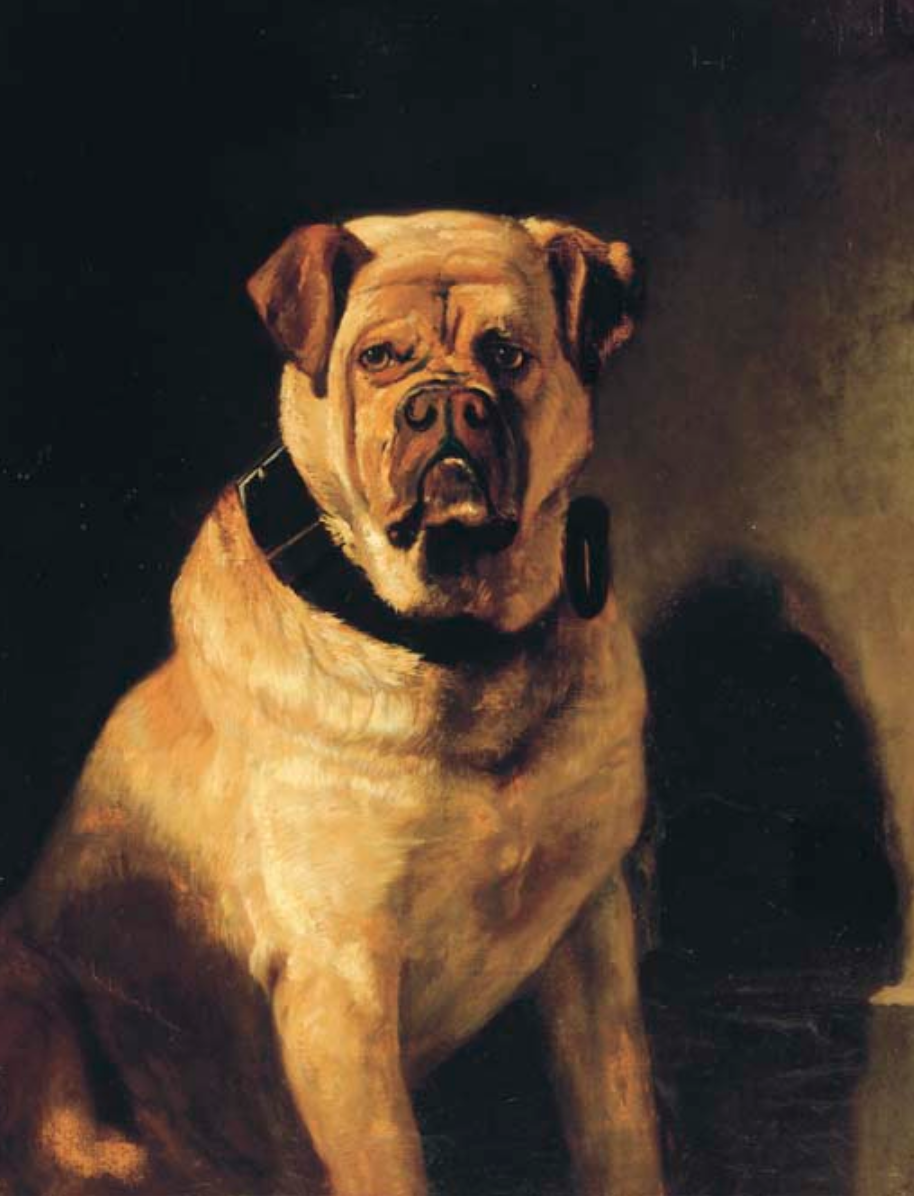 Painting of a Mastiff from 1857, clearly showing a bifid nose.

No one has really looked at the genetics of bifid noses and clefts in dogs, Dr. Winston says, but the two conditions appear to be related. Causal mutations for cleft palates have been found in Brittany Spaniels and Nova Scotia Duck Tolling Retrievers, with other breeds currently being studied to determine their cleft-palate genetics, too.   To avoid midline defects such as clefts and bifid noses, Dr. Winston explored the science regarding prevention, starting with humans: Women who are trying to become pregnant are counseled by their physicians to begin supplementation with folic acid before conception.

In her breeding program, Dr. Winston puts mothers-to-be on 400 micrograms of folic acid when they come into heat, upping the dose to 800 micrograms once they have been bred. Because folic acid is water soluble, the risk of toxicity is low, as it is regularly removed from the body through urination. In breeds that experience other types of midline-closure defects – such as Rhodesian Ridgebacks, where a congenital condition called dermoid sinus is believed to be significantly reduced with folic-acid supplementation – some breeders supplement their breeding females year round.

Still, even with supplementation, Dr. Winston cautions, “there is still the possibility that these abnormalities can occur” – as the birth of her bifid-nosed puppy proved. When his dam was bred again, this time to a different stud dog, Dr. Winston was curious to see if the defect would reappear. But she only had a singleton – not exactly a big sample to extrapolate from. 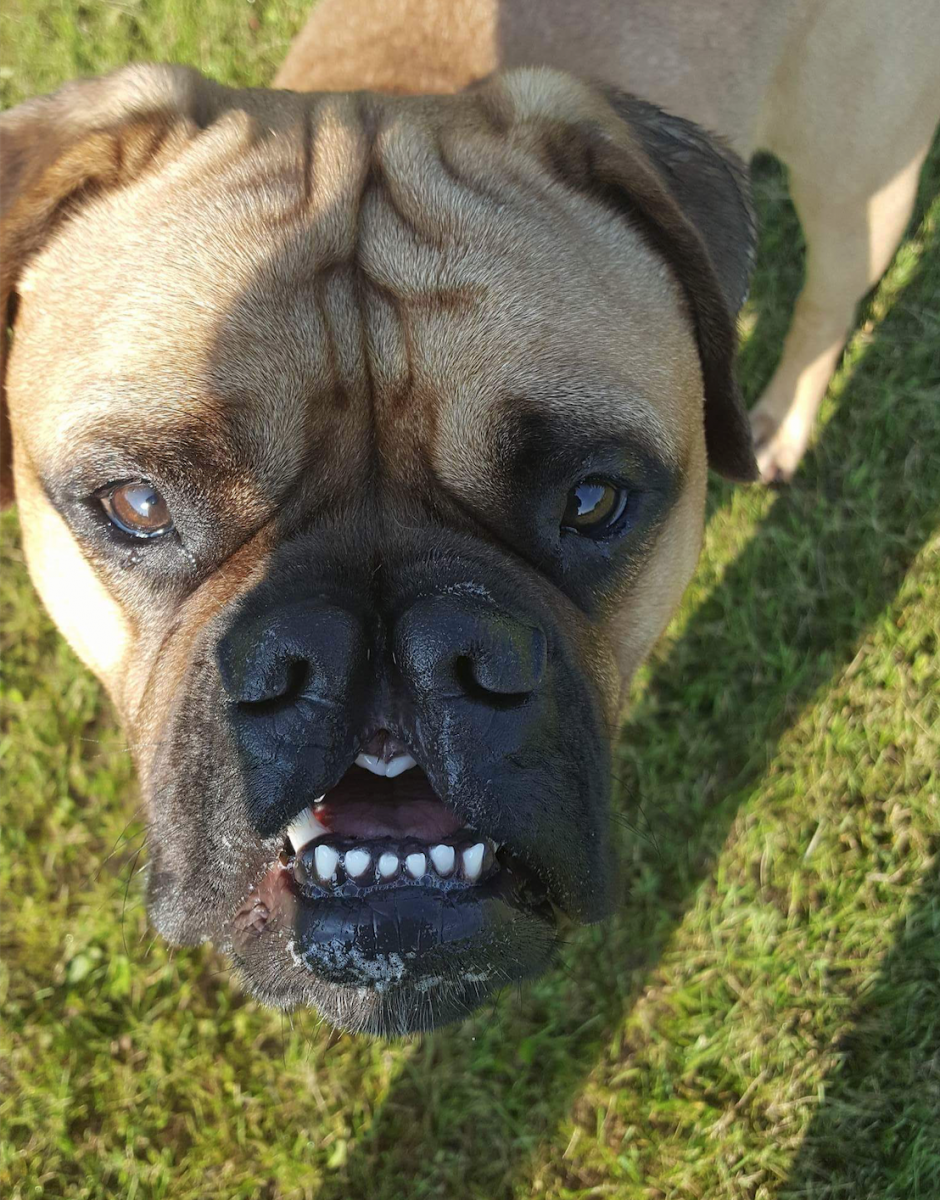 A more severe expression of this midline defect: Bullmastiff with bifid nose and cleft lip.

Midline abnormalities like clefts have also been attributed to non-genetic factors. Dr. Winston notes that brachycephalic breeds have a 30 percent higher risk for these defects. In humans, the general belief is that genetics account for 30 to 35 percent of oronasal clefting, she says, adding that genetics plus environmental influences can account for 80 percent of these defects, though little is known about the actual mechanics of how genetic and environmental interact to produce these anomalies.

Dr. Winston notes that oversupplemenation with vitamin A is believed to have a role in midline defects, too. “While Vitamin A is essential for normal cellular function, including reproduction and development, high doses have been attributed to cleft-palate deformities in both humans and mice,” she says, pointing to a 1953 experiment in which pregnant mice were fed 35,000 IUs of vitamin A per day between days two and 16 of gestation, resulting in fetal anomalies that included cleft lips and/or palates. “Considering that the average laboratory mouse weighs 20 grams, or barely three-quarters of an ounce, and that one pound equals 453 grams, you can see how difficult it would be to feed enough vitamin A to cause toxicity to a large dog.”

Other external cleft-palate causes that have been posited include drug or chemical exposure, such as anti-inflammatory drugs like prednisone; antifungals like griseofulvin, and insecticides and pesticides.   “Some human orofacial clefts have been related to maternal environmental exposure to pesticides and exposure in agricultural work. Conversely, there are some studies that have found no indication of reproductive hazards,” Dr. Winston says. “Unfortunately, the epidemiologic evidence is inconclusive. According to a 2005 study, only Benzenes, an organic solvent, was seen as a contributing factor to increased neural-crest malformations in offspring, which includes clefting of the face and oral cavity.” 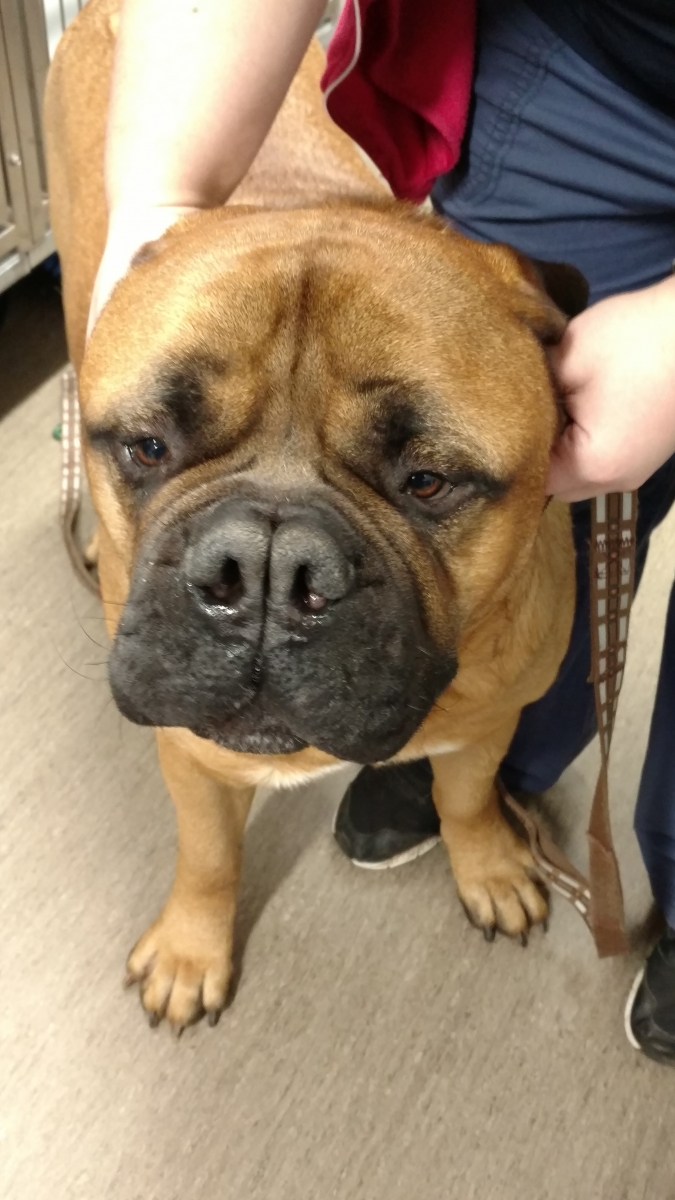 Dr. Winston's bifid-nosed Bullmastiff at two years old.
Since she had her bifid puppy, Dr. Winston has heard of another breeder who produced multiple bifid puppies in the same litter, along with cleft palates, which makes her suspect that there is some genetic component involved.
While the jury is still out, one thing is for sure: Bullmastiff breeders and owners need to know that, while relatively rare, these split noses do surface in the breed from time to time.
© Modern Molosser Magazine. This article may not be reposted, reprinted, rewritten, excerpted or otherwise duplicated in any medium without the express written permission of the publisher.
Fri, 12/09/2016 - 10:47am