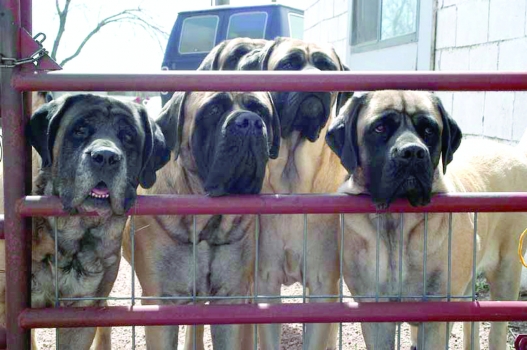 Managing a multiple Mastiff household
By
Dana Moeller
They say Mastiffs are like Fritos: You can’t have just one.
So true. When people buy their first Mastiff, most aren’t aware of how addicting this breed is. I know I wasn’t …
I grew up with Rottweilers, and when my husband and I got married we owned Great Danes for almost 12 years. We live on a farm in the country, and after our last Dane died, I wanted another big dog to stand at our gate and keep people on the other side.
Redgate Mastiffs was established in 1995 when I purchased our first Mastiff, Sunny.  Several months later, Sunny was joined by Rosie. Soon, there was a Grizz, a Haley and a Baby.
In the last 14 years, counting rescues and litters, the number of Mastiffs in my home has been as high as 23. Currently, there are just a dozen. Yes, all living together – loose in my home. 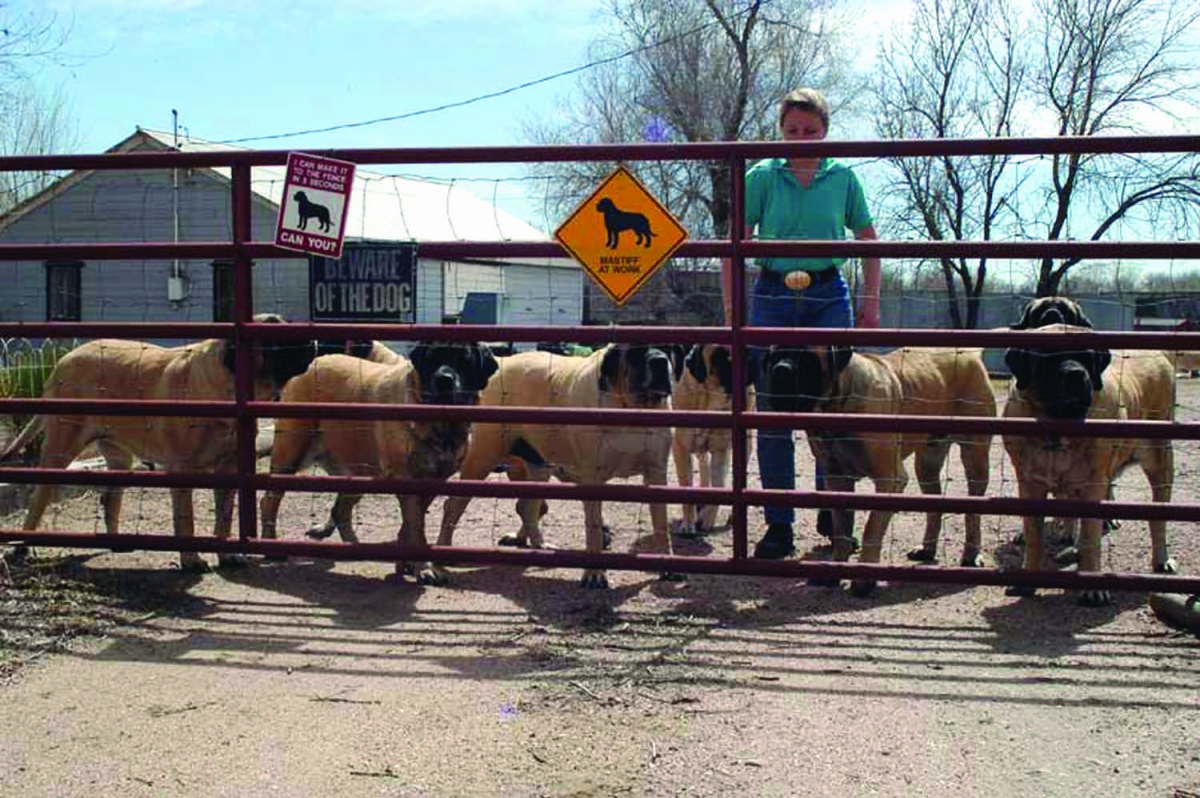 I have bred four generations of Mastiffs, and decided years ago to keep two promising girls, in some cases three, from each litter. It never fails that my favorite puppy at 10 weeks isn’t at 10 months.
Keeping two sisters also proved beneficial in keeping the pups mentally stimulated and physically fit. At about 12 weeks old, the sisters get introduced for extended yard time with the other adult dogs. While Mom has been a symbol of security, she may not be one of the alpha girls. I usually start the introduction with the lowest-ranking girl; they are excellent babysitters and enjoy the ascension in rank. When that girl has approved of the pups and no longer finds them a keen interest, I introduce the pups to another.
All these introductions have to be monitored; the pups lack of awareness of the pack hierarchy and may need guidance. A puppy who tries to nurse on her dad doesn’t go over too well.
Once the pups have all been properly introduced to all the pack members, they meet the bosses, the old matrons. Wise and tolerant, but only to a point, these gray-haired ladies teach the pups the etiquette of the pack.  I’ve watched two youngsters bound around a corner to find Grandma is standing in their path: They hit the brakes and sober up really quick.
Some other etiquette pups learn along the way:
• Dogs of lower rank are never to step over the heads of higher-ranking dogs. If one of the higher-ranking dogs is lying in the hall, no one will pass until someone eventually figures a way around the back end of the sleeping dog. Or the older dog raises up to her elbows and turns her head. The last resort: I stand over the head of the sleeping dog so they know the coast is clear and can pass without incident. 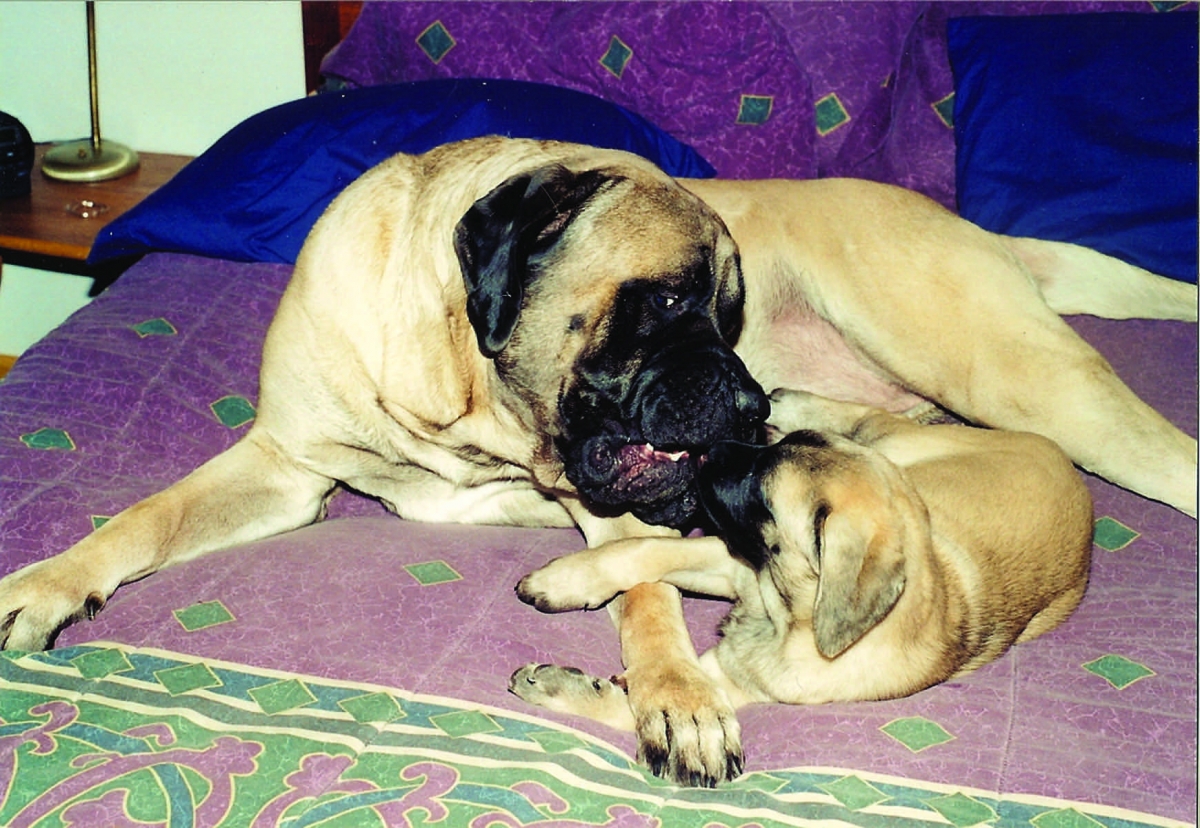 • Who can get pushed off a bowl and who can’t. Puppies will often surf from bowl to bowl looking for a yummy morsel after their meal is gone. Some dogs don’t mind, but others take great offense. A quick correction by the offender hopefully leaves a big impression.
• Who is first in line to get a pat on the head when we humans come home to the pack. It’s important to move everyone back off the gate and into the open as quickly as possible. I always say hello to my boy first, then work my way through the pack from the highest to lowest in rank. Younger dogs can get caught up in the excitement at times and can get a harsh correction from the next dog in line.
Once home, it’s my job to take over as the alpha. I now dictate what the pack is going to do. Depending on the hour, they all seem to enjoy a group walk around the yard perimeter, or, if time allows, a stroll around the entire property.
This walk around the property reinforces a feeling of peace and security in the pack.  Once we are all assured that the boogie man isn’t lurking under some bush or behind a tree, they can relax into a state of happy Mastiffness, knowing they have done their part of holding down the fort while I’ve been at work. 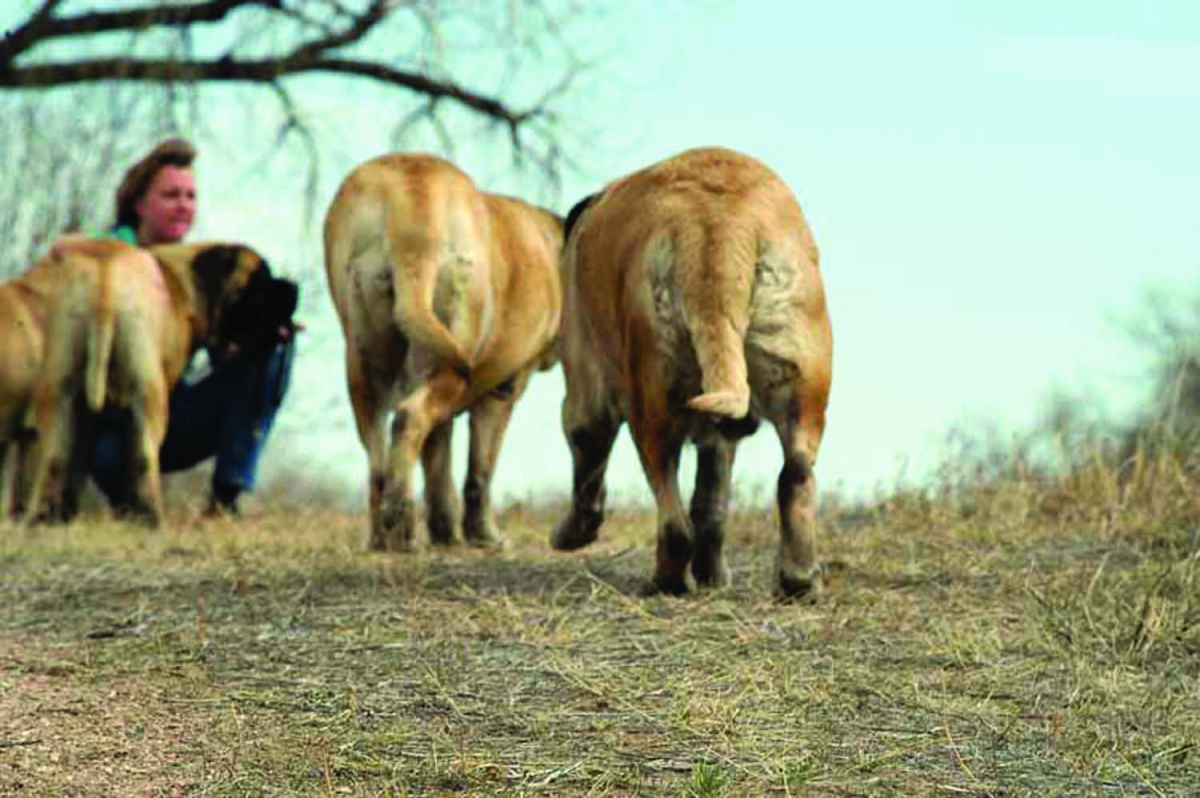 It took me a while to figure out what the secret language was between pack members to tell everyone it’s time to sleep: The alphas gave out one or two deep audible sighs, and they all would follow suit and their heads would start lowering into sleep. Sure enough, when I started giving out one or two big sighs, it worked like a charm.
Some other things the alphas do to signal to the pack are shaking their heads or beating their tails on the floor. This means it’s time to get up and do something. Yawning can mean it’s time to sleep, or time to get up…
Howling means reform the pack, someone is missing. It can indicate that someone was left outside when everyone else was let in. It’s usually instigated by the one who wants in or wants out to rejoin the pack. Or, sadly, howling can be for someone in the pack who has died. 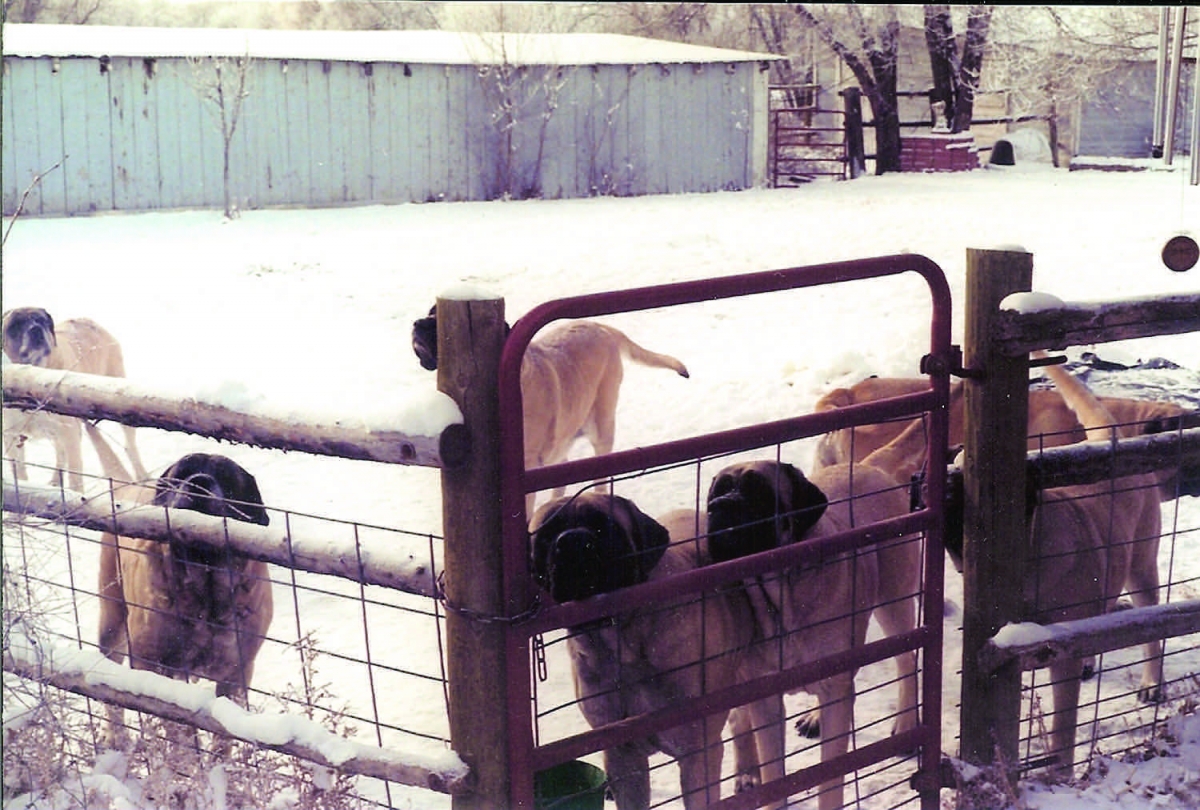 Sometimes I’ll go out to do something in the yard that I don’t want help with (like planting flowers). One of them will see me through the window and they all will start to howl to guide me home. I can’t help but stop what I’m doing to go enjoy a big reunion beause I was lost in their eyes and now I’ve miraculously been found!
It does my heart good to gaze out at a large gathering of great-grandmas, grandmas, mothers and daughters under the shade of a tree in the yard on a beautiful day. They resemble a pride of lions …  but sometimes it’s not all harmony.
Because I try to let them settle most of their own squabbles as they grow up together, the pack order appears to be established early and any disagreements are usually brief. The only confrontations have been when one of the older dogs passes away and there are two contenders who want to move into that position.
I did have two boys once who, once they fought, could never be trusted together alone. I ended up dividing the house with baby gates so I didn’t have to worry about them getting into it again. Years later, when the older boy passed, I decided to keep only one male in my house at a time – one of the smarter decisions I’ve ever made.
When people come over, they are always amazed that a baby gate leaning up against a doorway is enough to hold back one dog, let alone 10 or 12. But they all had that gate crash to the floor when they bumped it as puppies, so no one dares to touch it anymore.
I think everyone hates poop detail. My yard is divided into three separate areas, encompassing about a half-acre. This makes it possible to split up dogs according to age group, gender or whatever.
When there isn’t any need to split everyone up, there are gates between yards that can be left open so they can make the loop around the house and pick out a favorite spot wherever they choose. This also makes it easy to make a quick loop for clean-up. The best thing I have found for yard pick-up is my horse’s stall rake. I have a wheelbarrow in a centrally located spot, and spend about five minutes per yard doing pick up after morning feeding. It’s made clean-up a breeze. 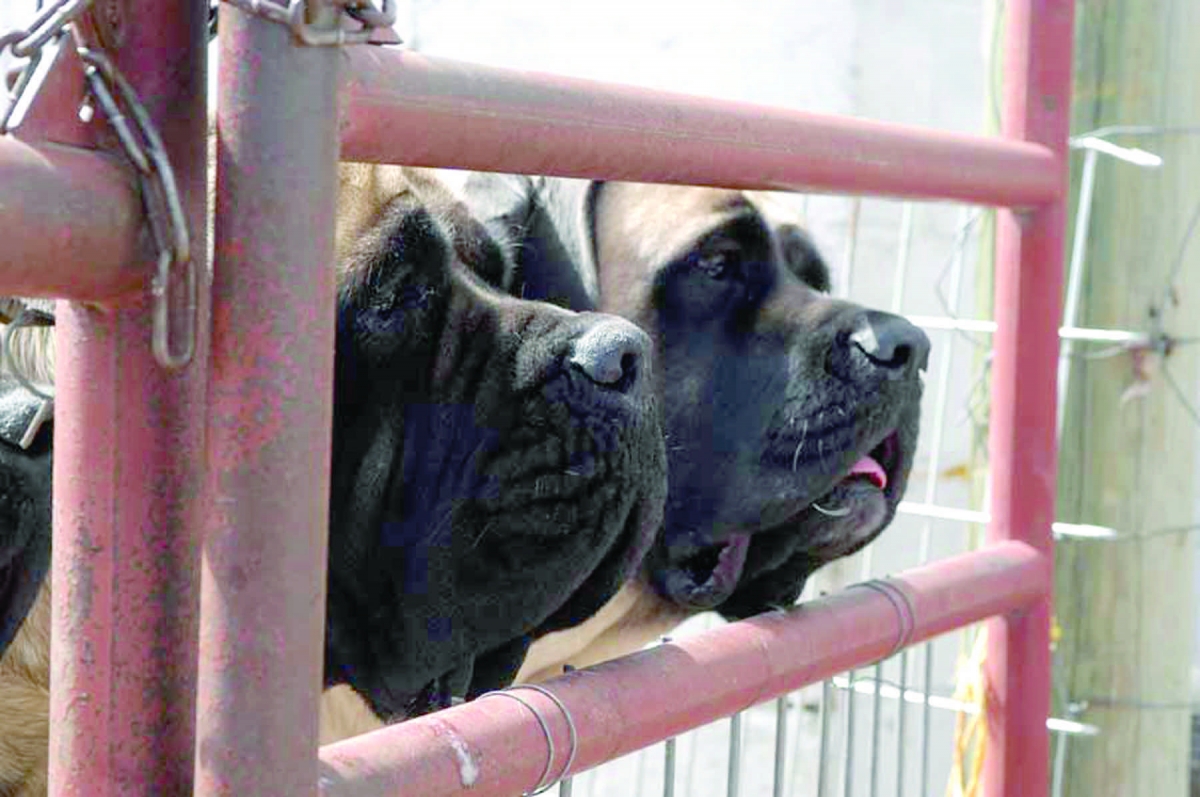 My fences are post and rail with stock wire. This makes it easy to see what’s going on from almost any angle outside and nearly any window inside. I think if someone were planning landscaping, it would be a good idea to plant deciduous trees on the inside areas of the yard with evergreens around the perimeters for privacy, and tall shade trees to the south end of the yard for shade.
Most landscaping isn’t safe with a Mastiff in the yard. They are keen to dig up flowers, trim branches and chew the bark off of everything, so if you don’t plan on putting fences around your flower beds or wrapping your trees with some stock wire, it’s important not to get too attached. Same for the deck, steps and patio furniture. I think it’s just natural for Mastiffs to “customize” anything that could bump them in the shoulders or hit them in the head by chewing the corners off. Just another thing to learn to live with, I guess. The best thing to put in the dog yards for sitting around talking dogs with friends is boulders.
While my other Mastiff friends understand what living with these big dogs is like, most people would probably think I am crazy. As a breeder of these noble creatures, you have to be dedicated because there are many highs and lows along the way. My Mastiffs has seen its share of victories in the ring, and I am always proud of my pups that go on to be wonderful companions in some family who just wants a pup to love. But living with my pack of gentle giants is truly a joy that sustains me.
© Modern Molosser Magazine. This article may not be reposted, reprinted, rewritten, excerpted or otherwise duplicated in any medium without the express written permission of the publisher.
Thu, 07/05/2018 - 8:03am

Molosser Moment #17
American Mastiffs are a controversial subject in Mastiff circles, in part because they are marketed to prospective owners as “Mastiff Lite” – no drooling and fewer health issues, though their critics say neither is true.