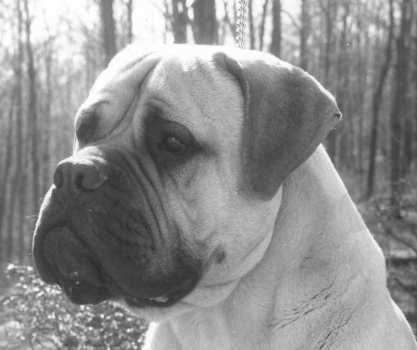 A primer on correct breed type
By
Helene Nietsch
In the early 19th Century, English gamekeepers created the Bullmastiff by crossing the Bulldog with the Mastiff to obtain fleet-footed, powerful dogs for protection against poachers.
Combining tremendous physical strength and guarding instinct with an affectionate disposition and devotion to their master, this marriage of breeds was created as much for the character of the breed as it was the physical attributes each contributor offered. When the Bullmastiff was produced, it was bred with one specific purpose – and that was solely as a keeper’s night dog. Often his life depended on the staunchness of his night dog and not as we see today, where one could expect an introduction to a Bullmastiff to involve a hand lick.
The “general appearance” in our standard gives one a good sense of the Bullmastiff breed – “symmetrical (nearly square/balanced), great strength (sound), powerfully built (substantial).” But if any Bullmastiff sticks his head through a hole in the fence, would you absolutely identify it as a Bullmastiff?  If you don’t, it is the most serious fault of all.
If there are a Mastiff and Bullmastiff standing on a hillside in the distance, and one is rectangular and the other square, which is the Bullmastiff? For a Bullmastiff to look like a Bullmastiff, it must be nearly square. One must read and study the standard and engage in other means of education to best understand Bullmastiff breed type. 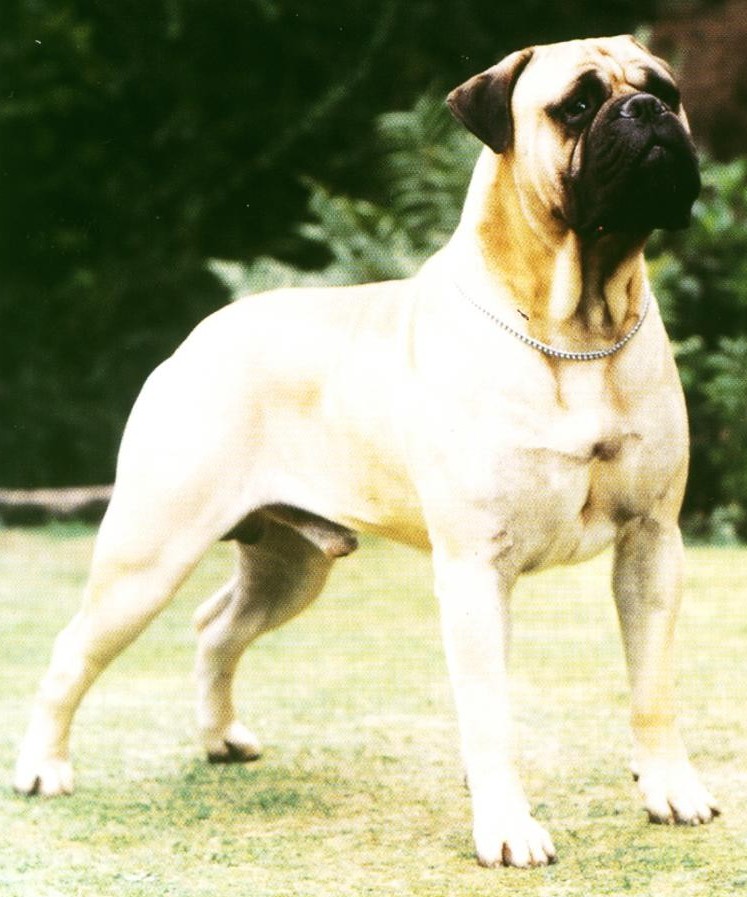 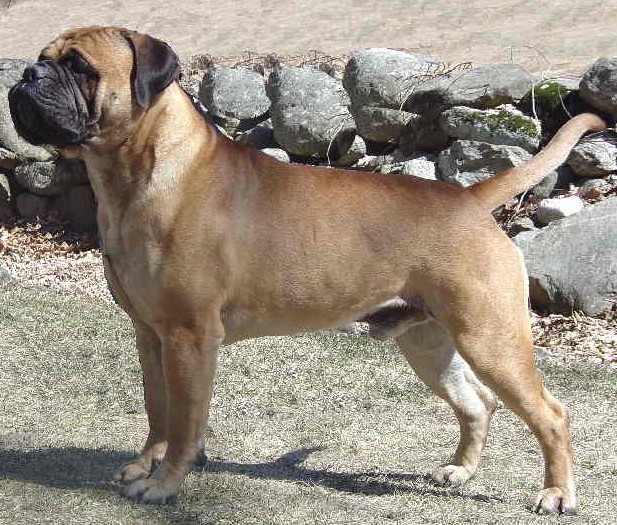 Ch. Bangard Right on Target. Another nearly square dog with lovely head and expression, nice small ears, very strong muzzle and level, short back.
Just as Bullmastiff temperament has evolved over the years, so has head type, with correct proportion of the head being vitally important in preserving today’s breed type. The skull must be large, with a flat forehead, small triangular ears, well-developed cheeks, and a broad and deep muzzle with widely spaced canines, providing the holding power the Bullmastiff needed to retain the poacher, all creating the square appearance of the head. Breeders often use the phrase “a cube, on a cube on a cube” (muzzle, skull, body) to describe correct proportion of the Bullmastiff, with the short back and compact body every bit depicting breed type as the black mask and squareness of the head and muzzle. 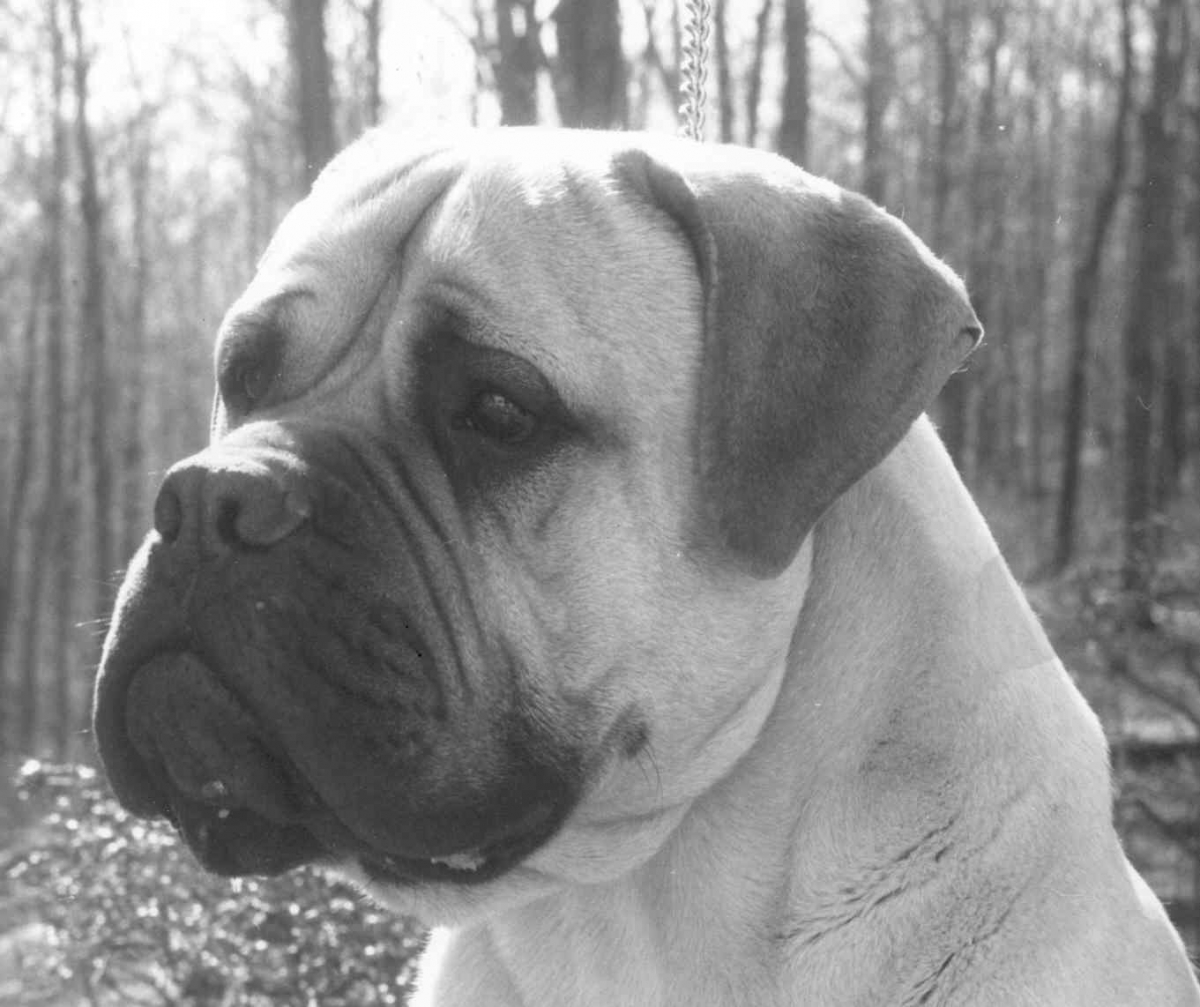 Ch. Huck's Last Hurrah of Bandog. An example of a gorgeous head from the 1970s, but would still be a desired head type. Lovely shape and color of eye, proper proportion of skull to muzzle.
The breed has evolved over the last 50 years in this country from a plainer, more moderate, less substantial dog … and a Bullmastiff with a head that more resembled a Mastiff or Rhodesian Ridgeback. British type has been more consistent than the American Bullmastiffs of today. Dogs that were imported into this country 50 years ago bore little resemblance to the best Bullmastiffs of today … Bullmastiffs with compact bodies and beautiful heads.
But with the diversity of type however still in the ring, it is unclear how today’s judges evaluate our breed against the standard and against the competition. We see Bullmastiffs ranging in style from Shar Pei, Mastiff, Bulldog and Am Staff types, making it difficult for any new judge without impeccable education and mentoring to identify the correct type. 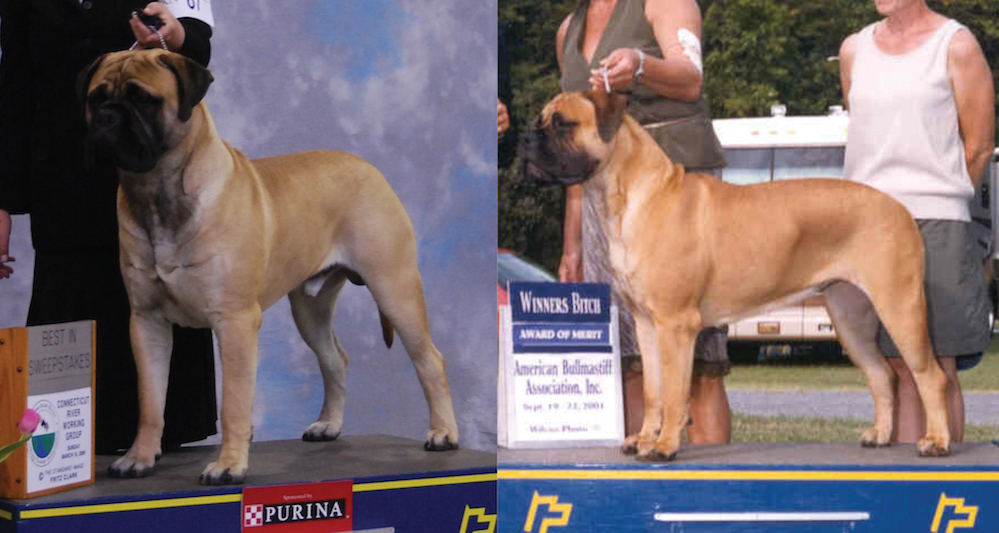 Above left: Ch. Highpoint's Four on the Floor. Lovely example of a teenage dog, showing proper proportion of length to height, strong front legs, great head for such a young dog, with nice small ears, strong pigment, and good breadth and depth of muzzle. Above right: Ch. Banstock's Waterborne Neesha. This national specialty Winner's Bitch is nicely up on leg without being leggy. She has a nice length of back, nearly square, with moderate angles. Her strong head has nice small ears, lovely expression and correct length of muzzle.
If you must learn anything about this breed, you must think square. The muzzle is a cube, heavy, deep, wide and strong, with a well-developed underjaw, and minimum flew, all creating a square appearance. The neck should be almost equal in circumference to the head, well-arched and thick, never slight or weedy, or short and stuffy. Appropriately compact Bullmastiffs are more capable of quick and sudden movement and can better make sudden change in speed and direction and maintain balance and grace than a long dog. This form following function is closely related to body type and the job the Bullmastiff was bred to do: to be able to penetrate thickets and dense underbrush, to be agile to maneuver around, over and under various obstacles, and he needed to be able to move swiftly and gingerly. A dog can be moving in the show ring with less style than its competitors but be moving properly. The body must be nearly square, compact, with a short loin … long is wrong! 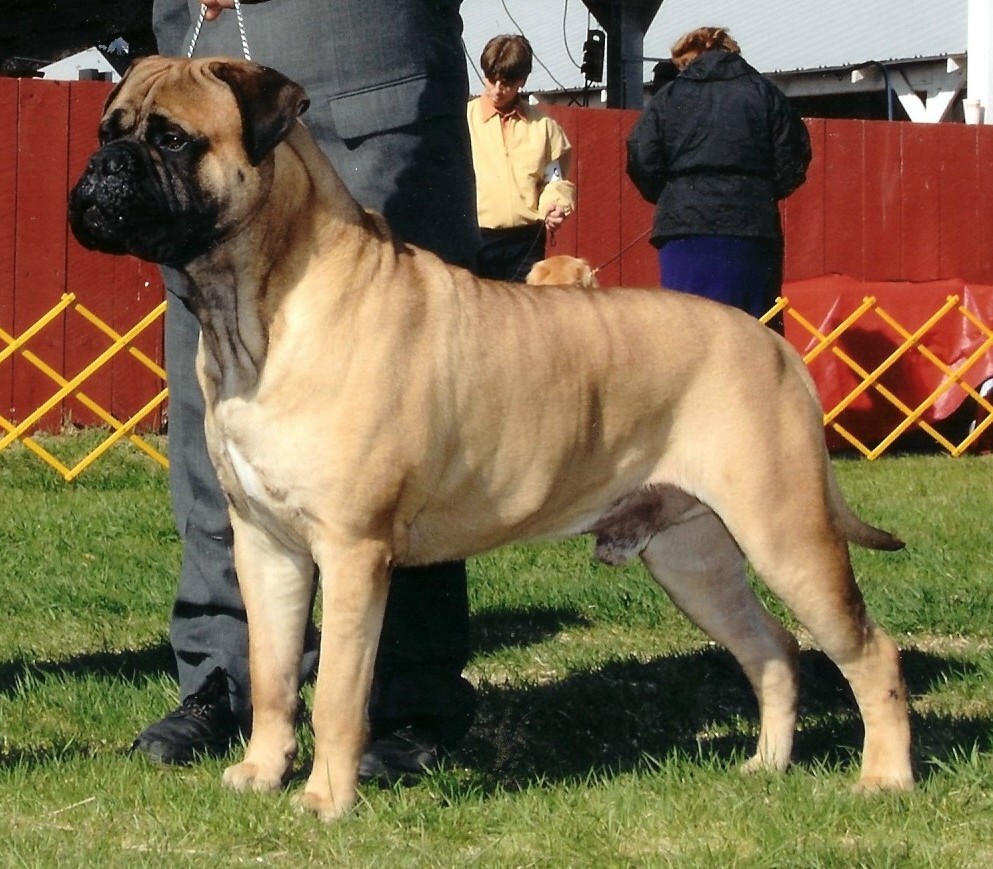 Ch. Banstock Bruno of the Northeast. Another nearly square dog with lovely head and expression, small ears, square muzzle, not overly wrinkled, lovely arch of neck and strong topline.
Our English imports years ago also came to this country with a sharper temperament. Temperament is the quintessential barometer of breed type. With the efforts of many dedicated breeders, temperament has become more stable, less aggressive, however, always maintaining the potential edge of a working dog. The breed was developed to kill the poacher’s dog and knock the poacher down and hold him. Bullmastiffs still exhibit this trait when greeting a stranger or even a loved one, and you will find that most Bullmastiffs like to jump up and look you in the eye, less threatening than in the past, but showing confidence and their desire to be in charge and ready to defend and protect. The breed has also become less dog aggressive than in the past, and you rarely find even a slight altercation at ringside.
However, I would never recommend that you maintain a household with two males.
As most judges in Britain tend to be breed specialists, more emphasis has been put on type than our American show rings. All-breed judges usually place more emphasis on how the dog will “perform” in the group than in his “place of business.” This is probably the reason that British Bullmastiffs have maintained a more consistent type than here in America. The bodies of the British Bullmastiff are shorter coupled, with more correct proportion; however, movement is far better in the American Bullmastiff, perhaps indicative of the longer backs in American dogs.
Breed-specific movement every bit defines breed type, as does the quality of the coat, the head type, size, bone and substance and temperament.  But we do not look at a dog’s gait in search for beauty; rather, it is evidence that the dog is both functional and fit with the ability to do its historic work. Structural weakness of any kind would be in direct conflict with the proper body type and function of a truly typey Bullmastiff. As the proof of the pudding is in the eating, so the proof of the dog is in action.
In the last 40 years there have been Bullmastiffs that have contributed significantly to the status of the Bullmastiff breed … dogs that have given the Bullmastiff serious recognition in the Working Group and Best in Show rings, and dogs that have influenced breed type as major contributors to the gene pool and evolved our breed into today’s breeding programs. Let us hope that the trend of dedicated breeders continues and that we see more beautiful Bullmastiffs in the show rings of tomorrow.
Helene Nietsch is a veteran breeder of Bullmastiffs for more than 40 years and has produced more than 100 champions, including the top-winning Bullmastiff in the history of the breed. She is approved to judge the entire Working Group, Hound Group, Junior Showmanship and Best in Show.
© Modern Molosser Magazine. This article may not be reposted, reprinted, rewritten, excerpted or otherwise duplicated in any medium without the express written permission of the publisher.
Thu, 07/05/2018 - 11:31am