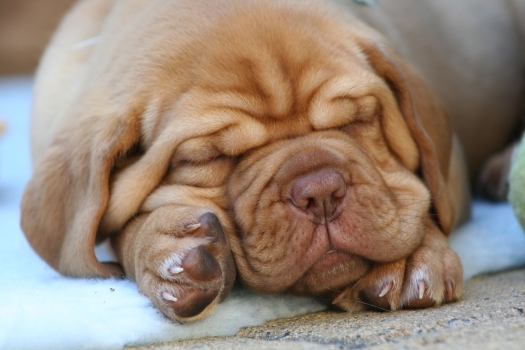 Anyone who has been breeding for a while knows how heartbreaking it can be. While we were no strangers to hand-rearing puppies, last year for the first time we were faced with the unthinkable – we lost the bitch when her puppies were just 12 hours old.

Our girl went downhill dramatically about six days before she was due to whelp. Blood tests revealed nothing, but she continued to decline, so we performed a Caesarean the next day, delivering 14 puppies. She didn’t ever regain consciousness; we believe ultimately she may have suffered disseminated intravascular coagulopathy, in which blood clots form in the body’s small blood vessels, reducing blood flow and damaging organs. Sad, as she never really met her babies, but we had no time to reflect on this; by this stage, we were already hard at work. The puppies did not feed from her at all, as they were too premature and weak.

Orphaned neonatal puppies have needs that must be met by the breeder. First, they require a heat source, as they are unable to fully maintain body temperature until they are approximately four weeks of age. Initially, they require a temperature of 30 degrees C (86 degrees F), dropping by a degree every few days down to 27 degrees C (80.6 degrees F), which is considered the “thermoneutral zone,” allowing puppies to maintain body temperature at an optimal point with a minimum of energy. Of course, how you provide this heat will vary with your individual situation, but personally we have found that covered heat lamps work well in allowing puppies to choose a temperature gradient that suits them best. A digital thermometer can give useful information on what the environment is at their level, but in the most basic situation, if your puppies are huddling and not settling, it is too cold for them, and if they’re spread out and unsettled, it is probably too warm. Maintenance of suitable temperature is also important to avoid fading puppies due to herpes virus – the virus cannot replicate above 27 degrees C (80.6 degrees F).

Second, puppies that do not have a dam to nurse from must receive a colostrum supplement for their first 24 hours, and even more importantly, they need this before any other sort of milk supplement. Using milk during this period primes the gut wall to close and prevents the large proteins that make up antibodies from passing through. We use a supplement branded Impact here in Australia (a bovine colostrum concentrate), but we’re not aware of what is available in other countries. A degree of passive immunity is passed from the bitch to the puppies in utero, but this is minimal (as little as 10 percent) compared to what they can absorb through the digestive tract in the first 24 hours following birth. After 24 hours, change to a high-quality milk supplement designed specifically for puppies.

So we have weak, premature puppies with no suckle reflex. The only option we have is to tube-feed. It seems scary: What if I put it in the wrong place and “drown” the puppy? How will I know it’s in the right place? We have some great instructions and a video to watch, but in the end you have to understand that without nutrition your puppies will certainly die. You will be sleep deprived and mistakes may still be made, but if you don’t tube-feed puppies that are too weak to suckle, they will die.

We use a neonatal nasogastric feeding tube (size 8 French with numbered measurements along it) and clean syringes of varying sizes. Cleanliness is important, and all water used for making up colostrum or milk supplements should be pre-boiled, along with washing all feeding equipment in boiled water and detergent (plus clean hands!).

Feeds are tailored to the weight of the puppy and initially every two hours from birth. We tend to find the indicated volumes are on the low side for adequate growth, but start small and often, and gauge the response from there. As puppies grow, they have greater body stores and can manage longer periods without feeding; after a week, you should be able to feed every three hours, and at a week and a half of age, larger volumes can be fed every four hours.

Draw up the required amount of milk in a syringe and take the feeding tube from warm water (this stops it from getting too stiff to pass safely). Check the length of the feeding tube against the side of the puppy, measuring from the nose to the last rib. Take note of this measurement, as you will pass the tube no more, or less, than this number.

Place the feeding tube on the syringe and inject the milk to fill the feeding tube. We find it easiest to dip a finger in the milk and get the puppy to suckle on our index finger, which allows us to control the head with our thumb and other fingers (and also moisten the mouth to allow easier passage of the tube). We then pass the tube through the esophagus via the mouth, going down one side of the finger to the desired measurement. If you have reached the previously measured point, then the tube can only be in the stomach.

If the tube will not pass, then you most likely have it in the trachea (heading towards the lungs); if you push the tube too far in then you risk having it double around in the stomach and possibly coming back up the esophagus from where it may be inhaled.

Once you have the tube positioned where it needs to be, slowly inject the milk. It is tempting to depress the plunger quickly to get it over and done with, but this can cause the milk to leave the tube at quite a high pressure. This pressure may cause the lining of the stomach to erode, leading to ulcers.

Pull the feeding tube out steadily with the syringe attached. Most puppies accept the feeding process quite readily (we hoped to video a difficult one so people know what to expect, but none were objecting). Most puppies are immediately relaxed and happy with full bellies.

They must now be stimulated to urinate and defecate (initially after every feed). We use toilet paper for urine, and then change to baby wipes for feces. To stimulate this reflex, you initially need to rub gently around the prepuce or vulva. Urine should be evaluated for color and concentration; dilute urine suggests they are well hydrated. Once they have stopped urinating, change to the baby wipes (they are more gentle on this delicate area), and rub both the peroneal and the perianal areas gently. They will strain and should pass feces after each feeding. If they are not, you may need to introduce a small volume of warm water (1 ml) into the rectum using a syringe (not the same one you use for feeding!). Hold the tail down for a short while and then stimulate them to defecate again. If they pass quite solid feces, the milk may be too concentrated and is causing them to become constipated, or they are dehydrated and require more milk. If this is a consistent problem without any apparent cause, a drop of castor oil a day can help.

As the puppies get older they will start to urinate without stimulation (at about two weeks of age), and eventually they will defecate without stimulation, but this comes a little later.   In litters requiring critical care, all puppies are weighed on infant scales, and their weights recorded following feeding and toileting at every meal in the first few days. This allows us to note any trends, and increase or decrease volumes as necessary to ensure all puppies are gaining weight. After a few days, we change to weighing twice daily.

Eventually, we find the puppies become stronger and resent tube-feeding; at this stage you can introduce bottle feeding, which seems great but generally takes much longer than tube-feeding (once you’re proficient at it). Other options are using a syringe to feed as seen in the video (but take care to go quite slowly), or sponge-feed (saturate a new, dense sponge intented for cosmetic application with formula, and allow puppies to suckle it). Puppies that suckle from birth can be bottle-fed, but take care that they are not working hard and getting too little (weigh and record!); also avoid the temptation to make larger holes in teats. It is better to loosen the collar of the bottle to allow air to enter the bottle, stopping the puppies having to fight against a negative vacuum. Some bottles are very well designed and allow for this problem.   If we feel a bitch is struggling to feed her litter, we often start solids as early as 2½ weeks. In a case such as this litter, we introduced solids at 2½ weeks of age from their estimated due date, so they were 3½ weeks old. The Girlings got involved with the Dogue de Bordeaux while working in the United Kingdom, then returned to Australia with several imports to begin their Moloscyg Kennel. Chris Girling is a veterinarian with a special interest in canine reproduction; with his wife Yvette, who is in her final year of vet school, he founded Noahs Crossing Veterinary Clinic in 2003. Both are breeder-judges and are licensed to judge the Utility Group. They are pictured with a bitch they kept from this orphaned litter.

© Modern Molosser Magazine. This article may not be reposted, reprinted, rewritten, excerpted or otherwise duplicated in any medium without the express written permission of the publisher.
Tue, 03/29/2016 - 12:36am

Confessions of a Collector
Not only are Mastiffs addictive ... breed collectibles are, too! Gabrielle Simmonds of Australia shares her collection.

Fluff Piece
No matter what you call them – “fluffies,” “hairies” or “rough coats” – long-haired Mastiffs are instant conversation sparkers for those who have never seen one.

A Moment With ...
In a candid interview, Italian breeder Vito Indiveri discusses the expression, elegance, power, agility and strong, balanced  character that define the Cane Corso.