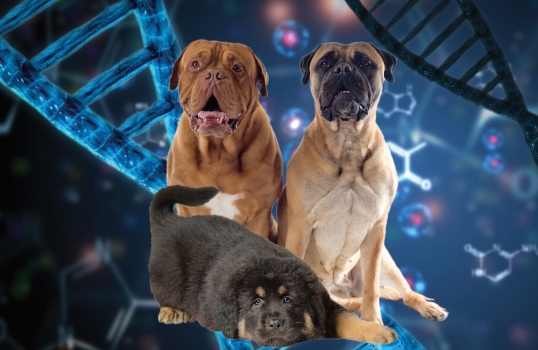 When it comes to our Molossers, wouldn’t you love a time machine? A “Back to the Future”-style contraption to take you back to pivotal points in a breed’s history – to see if the lore, the myth, the assumptions are actually true?

Admittedly, your chances of hopping into a time-tripping DeLorean and disappearing in a flash of light to see if, say, Kublai Khan really did keep 5,000 medieval mastiffs as part of his Mongolian army aren’t pretty high. But if you’re a history buff in search of answers – or at least tantalizing clues – a new genetics study pulls back the curtain of history far enough to give us a glimpse at some of the crissing and crossing that helped create our modern breeds.

In late April, Cell Reports magazine published a paper called “Genomic Analyses Reveal the Influence of Geographic Origin, Migration, and Hybridization on Modern Dog Breed Development.” To create what is the most diverse data set of dog breeds to date, the researchers studied 161 modern breeds, comparing 170,000 different points on their genomes. They identified 23 clades, or breed clusters, containing breeds that are significantly related.

What they discovered about Molosser breeds confirms many of the hunches experts have had over the years, debunks some other long-held myths – and introduces some connections no one has likely ever contemplated.

It comes as no surprise that breeds such as the Mastiff, Bullmastiff, Dogue de Bordeaux, Neapolitan Mastiff, Boerboel and Bulldog form a clade of their own, along with the Boxer, Bull Terrier, Staffordshire Bull Terrier, Boston Terrier and French Bulldog (the latter two rightly considered “mini-Molossers”). A graphic showing the 23 clades identified by the researchers. Proximity to another clade is not relevant; what matters are the dogs that share the same color, which reflects their shared genetic heritage. Look for the Molossers in the blue clade about positioned just below the three-o’clock mark.

“There are different reasons logically that a breed could be assigned to a clade,” explains one of the paper’s authors, Dr. Dayna Dreger of the National Institutes of Health in Bethesda, Maryland. “Its breeds might be derived from a common source, or it could reflect that there was introgression of one breed into another.”

But not everyone has a branch on that family tree: The study found that the Tibetan Mastiff is genetically distinct from European Molossers, despite of-repeated assertions that it is the original breed from which all modern Molossers descend.

“Interestingly, though mastiff breed histories all want to say mastiffs are related to the Tibetan Mastiff, we don't see that – there’s no evidence of its recent or ancient introgression,” Dr. Dreger explains. “In all the analyses, the Tibetan Mastiff is a standout by itself,” clustered instead with Asian/Spitz breeds such as the Chow Chow, Siberian Husky and Shiba Inu.

Myth officially busted. In addition, the paper says, there is no recent genetic relationship between European Mastiffs and the giant flock guardians of the Mediterranean. This lack of cross-pollination between similar breeds in these geographic clades suggest that common traits – such as their large size – arose independently throughout history.

“These breed types required large size for guarding; however, each used that size in a different way, a fact that was recognized at least 2,000 years ago,” the paper explains. “The flock guards use their size to defeat animal predators, while the mastiffs use their size to keep human predators at bay, often through fierce countenance rather than action. The phylogenetic placement of these breeds and lack of recent admixture suggests that giant size developed independently in the different clades, and that it may have been one of the earliest traits by which breeds were segregated thousands of years ago.”

This genetic analysis shows that Mediterranean breeds such as the Great Pyrenees and Anatolian Shepherd have more in common with Salukis and Pharaoh Hounds than they do any of the Molosser breeds. And as for the Newfoundland, despite its categorization as a Molosser by the FCI, the study places it with sporting dogs such as the Labrador Retriever and Irish Water Spaniel. This graphic illustrates some of the genetic sharing between giant breeds. But the study found that dogs of this size evolved spontaneously in multiple parts of the world. Note lack of sharing between the European Molossers (represented by royal blue) and the  Tibetan Mastiff (yellow).

Geography can have a profound effect on a breed’s development. (Consider the English Cocker Spaniel in America, which eventually morphed into an American version so far removed from its origins that it was declared a separate breed.) To see how other immigrant dogs have fared, the study compared the DNA of Tibetan Mastiffs and Cane Corsos in their countries of origin – China and Italy, respectively – to established populations in the United States. And in both Molosser breeds, they found appreciable genetic differences.

Though there are documented stories of dogs with questionable provenance appearing in the pedigrees of American-bred Tibetan Mastiffs, the study suggests that on the whole the breed appears true to its genetic roots.

“The split between the U.S. and Chinese Tibetan Mastiffs is likely due to independent lineage formation stemming from an importation bottleneck, as is evident from estimations of inbreeding coefficients,” the study said, noting that American-bred Tibetan Mastiffs were more closely linebred.

But Cane Corsos were a different story. The Italian-bred Corsos formed their own clade, or grouping. In comparison, American-bred Corsos clustered with Neapolitan Mastiffs collected in the United States. The study also found significant shared haplotypes, or regions of genes, between the U.S. Corsos and Rottweilers that are not evident in the Italian Corsos, “as well as increased shared haplotypes with the other mastiffs.”

For decades, there have been rumors that the American Cane Corso population resulted not from a little-known Sicilian version of the Corso called the “Branchiero,” but rather from crosses between Neapolitan Mastiffs and Rottweilers on this side of the Atlantic. At minimum, the genetic evidence from the study validates the presence of these breeds in the American gene pool.

In addition to grouping genetically related breeds together, the study also looked at individual breeds, and what others breeds influenced their development. Not surprisingly, there was a great deal of shared blood between the various Mastiff breeds, and that dovetails with the historical record. For example, the documented use of Bullmastiffs in the DeBeers diamond mines explains that breed’s influence on South Africa’s mastiff, the Boerboel.

Some of the other results, however, come as a surprise, such as the influence of the German Shepherd Dog in the Italian Cane Corso (maybe the source of the longer, “rustic” coats sometimes seen in the breed?), or, even more bizarrely, the presence of the Kerry Blue Terrier as a significant contributor to the Dogue de Bordeaux.

After confirming that the Kerry Blue wasn't a typo, Dr. Dreger explains that some of the large terriers — including the Airedale and Soft Coated Wheaten — often have ties with the Mastiff clade, reflecting an exchange of genetics between them and the European mastiff breeds. "And the jury is out on which direction that exchange of material went: From Mastiff to Terrier to make big Terriers? Or from Terrier to Mastiff to make more feisty Mastiffs?" she says. "It could have been either, and may have been both!" In the case of the Kerry popping up in the Dogue haplotype, she ventures, it could reflect " some more distant, yet related, common ancestor of the two."

Dr. Dreger notes that the study is still ongoing, and that many Molosser breeds were not initially represented, among them the Dogo Argentino, Fila Brasiliero, Ca de Bou and Pyrenean Mastiff, to name a few. If you own any of these breeds and are willing to contribute a blood sample, please contact denise@modernmolosser.com, and I will put you in touch.

© Modern Molosser Magazine. This article may not be reposted, reprinted, rewritten, excerpted or otherwise duplicated in any medium without the express written permission of the publisher.
Fri, 07/28/2017 - 10:30pm