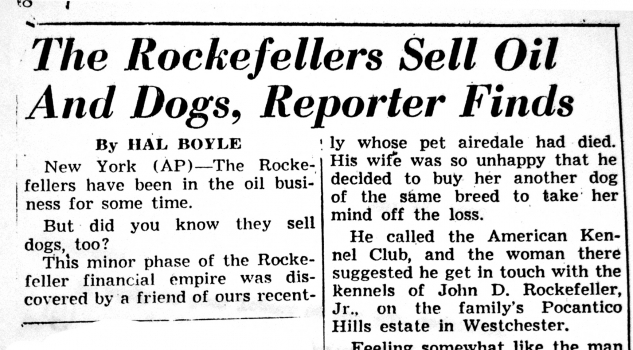 The 1948 Associated Press story that created some confusion about which Pocantico was which.

This Bullmastiff kennel didn't belong to the Rockefellers
By
Denise Flaim

John D. Rockefeller registered his Bullmastiffs under the Pocantico prefix – a very logical choice, since it was the name of the estate on which they were bred.

But by the late 1940s, another Bullmastiff breeder had taken on that name – and didn’t do much to dispel the Rockefeller mystique associated with it.

“The Rockfellers have been in the oil business for some time,” began an Associated Press story in 1948. “But did you know they sell dogs, too?”

The reporter went on to explain that a friend in search of an Airedale had called the American Kennel Club, which in turn sent him to the what he believed was the Rockefeller kennel. “Feeling somewhat like the man who went to the gas station to get his cigarette lighter filled,” the story went on, “our friend drove out to the estate.”

There he found a two-story, cut-stone, English-style building with herringbone oak floors, and some two dozen Airedales. The kennel also contained what the visitor described as “mastiffs,” though he did not get to view them.

“No one seems to know how this misinformation was arrived at. At least, that’s what they say,” fired off Pocantico estate superintendent Allan J. Bartlett in a memo after the story moved over the wire and was printed all over the country. “We do belong to the American Kennel Club,” he continued, in an apparent misunderstanding – the AKC is a club of dog clubs only, and has no individual or corporate members – “but I believe it would be better if we withdrew our membership. It serves us no useful purpose and at times is a nuisance.”
“That was me,” chuckled Edith Pyle recently about the kennel. (She had Airedales before Bullmastiffs.) Both former employees of Pocantico themselves, Edith Pyle and her father-in-law Tom began breeding Bullmastiffs literally next door to the Rockefellers, on the Stillman estate, where they had a riding stable and boarding for both dogs and horses. Finding that Rockefeller had not registered the kennel name, the Pyles took it themselves.
While the Rockefeller dogs were never shown, the Pyles’ dogs certainly were, all of them carrying the Pocantico kennel name – but ultimately none of its blood – into the 1990s. The last Pocantico dog shown was the brindle Pocantico Beckett of Banstock (Ch. Banstock Otis x Pocantico Favorite Shadow).
© Modern Molosser Magazine. This article may not be reposted, reprinted, rewritten, excerpted or otherwise duplicated in any medium without the express written permission of the publisher.
Fri, 12/30/2016 - 9:24pm