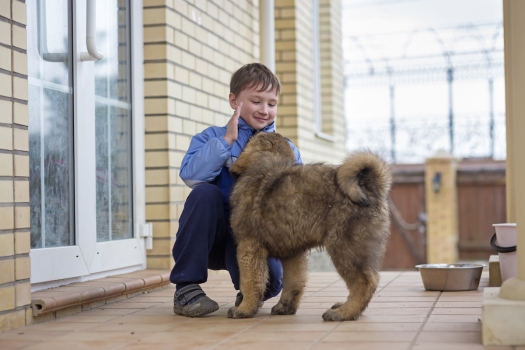 Timing is everything when socializing young Molossers
By
Kay Reil

A well-behaved, confident and stable adult Molosser is not just the result of good breeding, although genetics do play a large role in the end result. The other contributing factor is early socialization.

Socialization is the means by which we acquire the skills to perform as a member of society. In dog terms, that society is ours. The world into which we bring them is full of loud, random and strange encounters, and how we acclimate them to those stimuli can have a huge effect on how they will relate to strangers, other animals and their environment as adults. Considering that more dogs are euthanized due to behavior than from infections, this is an issue that can be remedied.

As newborns, pups are slowly introduced to discipline and self-restraint by their mother. The breeder can enhance this process by constant handling, regular nail trimming and exposure to sights and sounds outside the whelping box. I generally like to keep puppies in a fairly quiet surrounding for at least the first week or two to allow mom (especially first-time moms) time to settle into her role. The puppies’ energies at this time are and should be focused on survival – eating, defecating and maintaining body temperature. After this period, I will slowly allow clean visitors to visit and handle the babies. I change their music styles each day and play a CD of a thunderstorm at varying volumes.

By three weeks, the brain is wired to accept new stimuli, and puppies should be introduced to as many new situations as possible. The window of opportunity for a puppy to encounter new experiences is from three to 12 weeks; from 12 to 18 weeks, he becomes somewhat less receptive, and by 18 weeks the window is closed. It is at 18 weeks that the puppy is genetically programmed to be wary of unfamiliar things. Therefore, anything not encountered in this window will be deemed as strange. There has been much debate lately on the benefits versus detriments of early socialization outside the home. The general consensus of many trainers and veterinarians is that as long as the puppy has had that first set of shots and is taken to safe and clean environments, the benefits far outweigh the negatives. 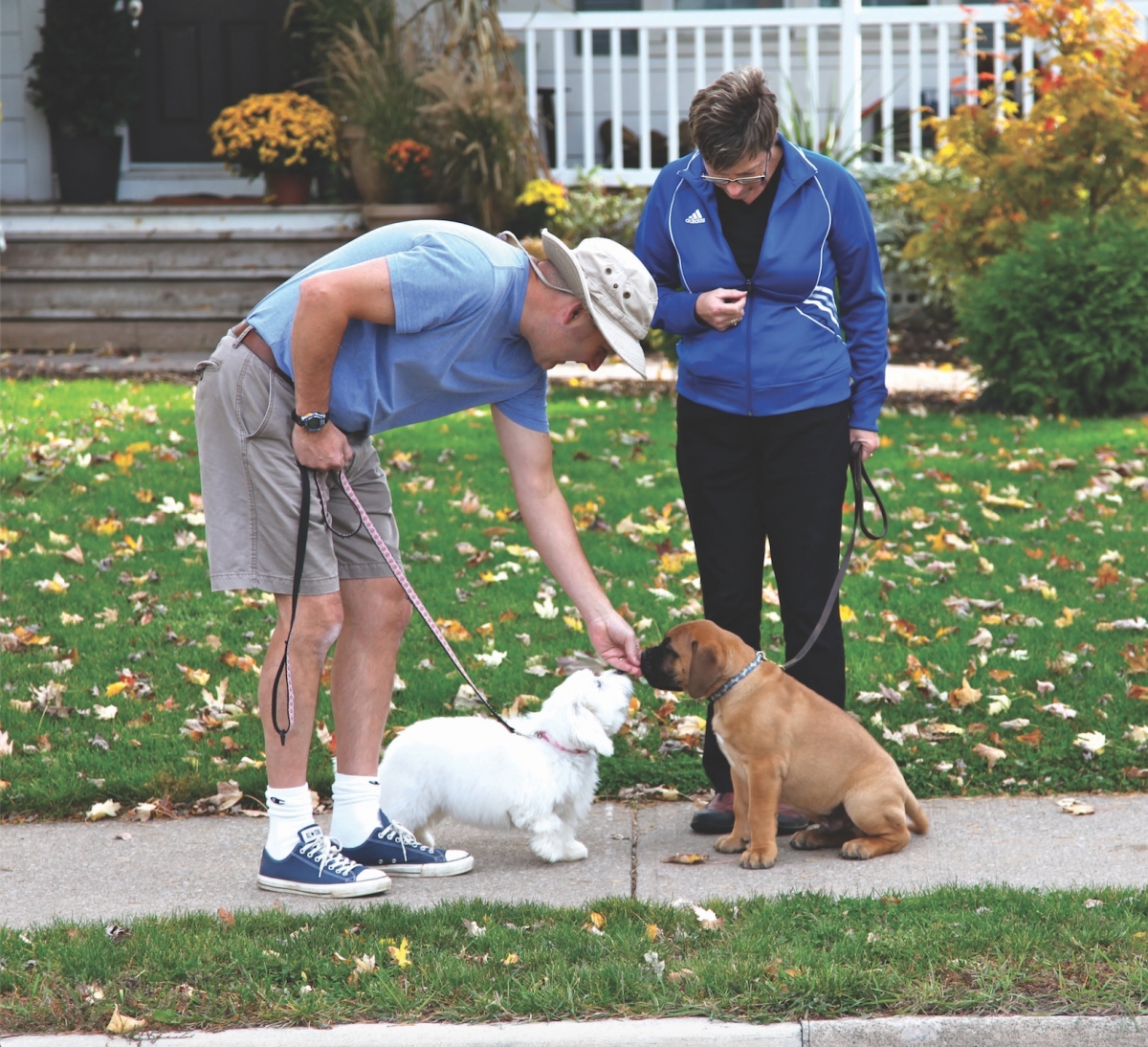 Make sure new dogs that you meet are appropriate and well behaved. 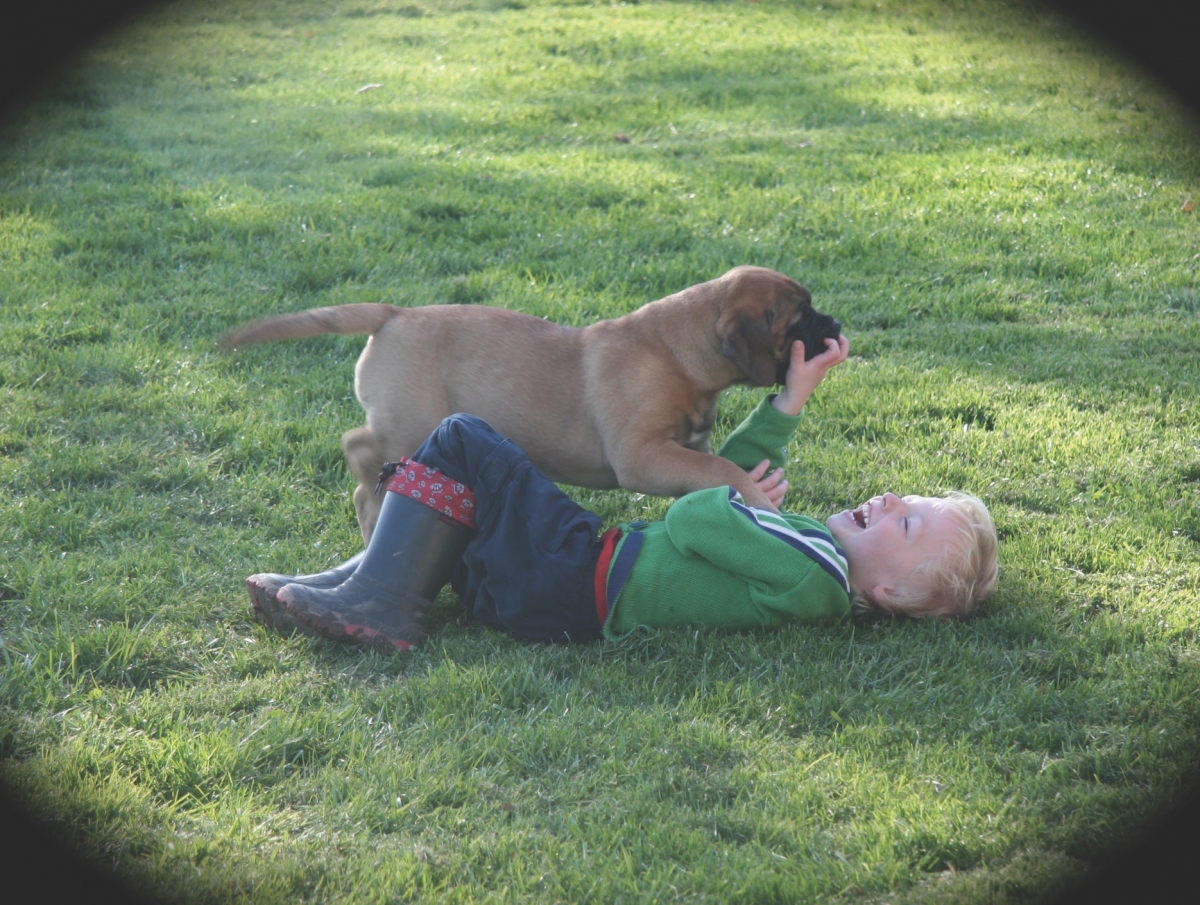 The same goes for children.

Time should be set aside each day to work with the puppy; some say that your puppy should meet at least 100 new people per week. It is easy to overlook many things that we would normally take for granted, such as a person in a hat – until we show up at an outdoor dog show and the judge has a hat on. Why is your dog so afraid of this person? Maybe he has never seen anyone with a hat on before.

When socializing puppies, remember to incorporate all the senses into their regime – new surfaces, grids, grates and gravel; new smells, especially babies, who have a completely different odor than adults, and new sounds – loud crashes and horns, vacuums, trains and thunderstorms. Meeting other animals will play a large part in your adult dog accepting other dogs, and being accepted himself. Garbage day is a wonderful time for training – the truck is loud, the cans crash, the workers have uniforms on, and smells are delightful. 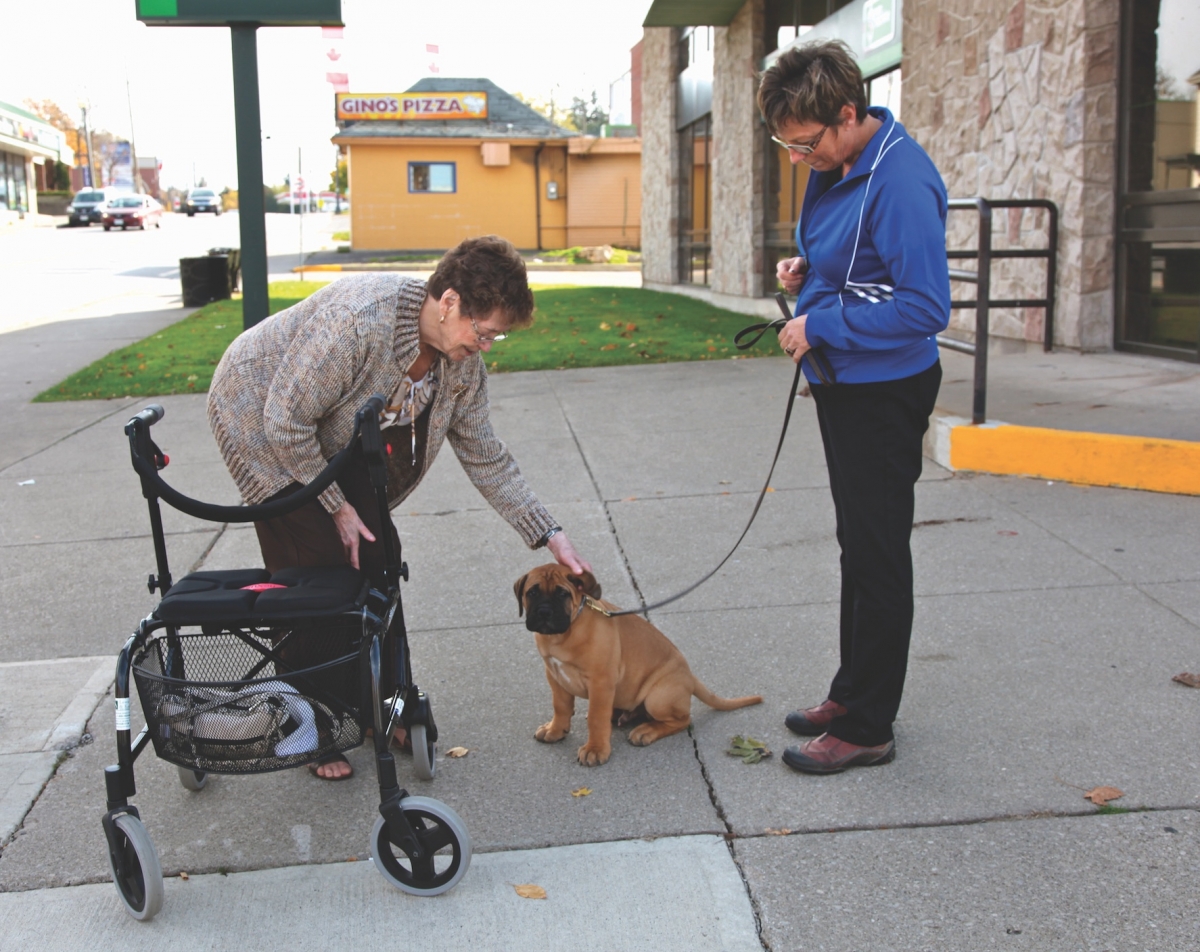 Expose your Molosser puppy to new and unusual objects, such as wheelchairs and umbrellas. 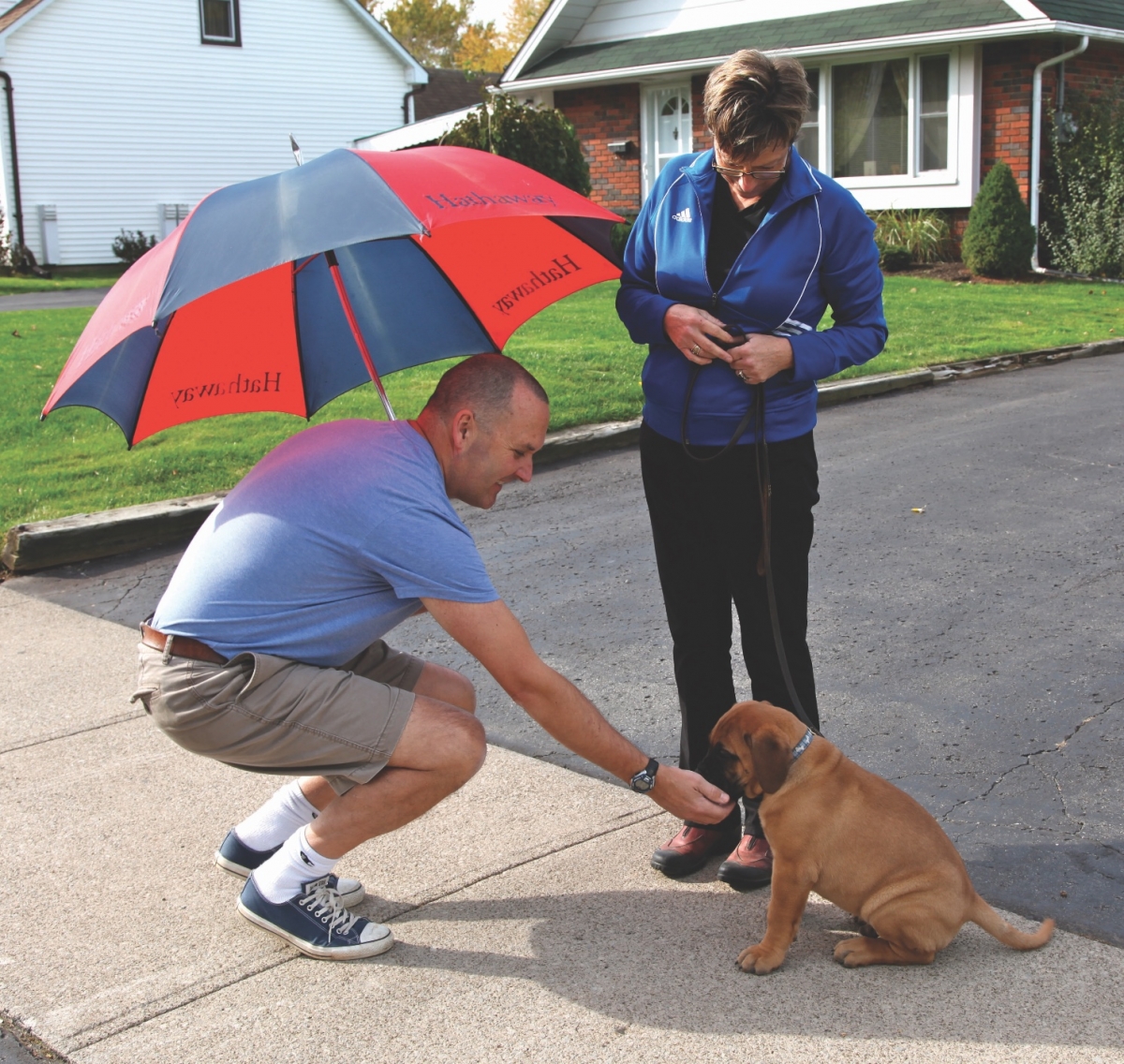 If possible, take your puppy in or near a senior center so that he can meet people in wheelchairs or with canes. Find a building with an elevator and ride it up and down a few times while dispensing yummy treats inside. This will be a lifesaver if you are ever roomed on the tenth floor of a hotel. My favorite place to socialize is the bank; the puppies learn to sit quietly in line and always get petted by the customers and tellers. The tellers at my bank actually keep cookies behind the counter for when my guys come in to make a withdrawal. 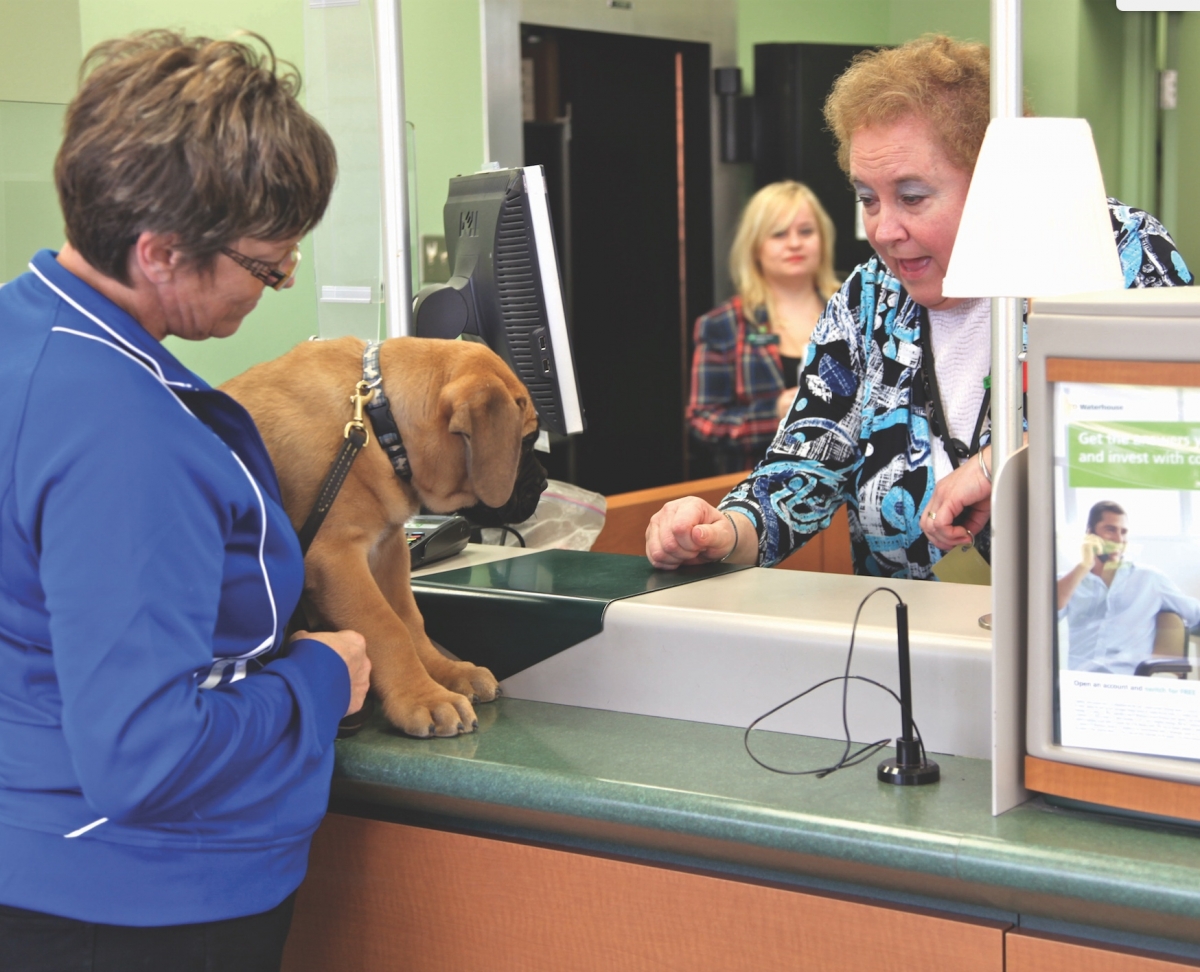 Banks are a great place for puppies to earn positive reinforcement -- cha-ching!

Enroll your dog in a safe and clean puppy-socialization class where he can meet and play with other dogs his age and size. Introducing your puppy to basic commands and cue words will also help set the stage for a wonderful obedience dog.

As dogs mature, many owners tend to spend less time and effort continuing to stimulate their brains with activities, learning and outings. Wonderful, fuzzy puppy breath passes far too quickly; be sure to set aside time with your new companion to set the stage for a sound, stable foundation on which to grow your friendship. The time put in during this period will reward you tenfold for years to come.

© Modern Molosser Magazine. This article may not be reposted, reprinted, rewritten, excerpted or otherwise duplicated in any medium without the express written permission of the publisher.
Sat, 08/06/2016 - 4:24pm