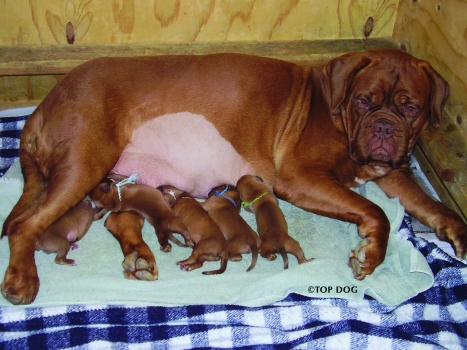 A Window to the Womb

For Molosser breeders, WhelpWise delivers peace of mind
By
Denise Flaim
It started with a goat.  A very pregnant goat.
At least, that’s what Airedale breeder and obstetrics nurse Karen Copley thought. A gift from a friend, Clementine the cloven hoofer was aspiring to beachball proportions as Thanksgiving drew near.
But the vet Copley consulted came to a very different conclusion. “He didn’t even examine her. He just said, ‘She can’t be pregnant because goats always come into heat in the fall and deliver in the spring.’ And he changed me $60 and sent me out.”
Frustrated, Copley snuck the goat into the hospital where she worked. As a top-level board meeting droned on next door, and as Clementine bleated her protests, Copley confirmed with ultrasound that Clementine was not only close to delivering – she was having quadruplets.
The goat episode was an epiphany for Copley, who had been in human obstetrics for two decades. “I knew all about this monitoring equipment made for preterm labor. All the research was done on lambs and pigs before it was used for humans,” she recalls. “I thought, ‘Why are we not doing this for animals?’”
So, in 1997, Copley founded WhelpWise, a veterinary perinatal service that sells and leases uterine contraction monitors and ultraound Dopplers to veterinarians and breeders. Based outside of Denver, the service monitored some 200 canine pregnancies that first year. Today, it does at least that many per month. Copley estimates that the service has monitored 20,000 bitches since its inception.
Copley has a number of Molosser clients – not surprising, since reproductive issues are not rare in these breeds.
“These breeds do tend to have quite an issue with inertia,” in which the uterus fails to contract, Copley notes. “And they can have real difficulty maintaining a litter if you can get them bred.” Pyometras and preterm labor are problems she sees frequency in Molosser breeds, “and they don’t mother well as a general rule.”
On call 24 hours a day, seven days a week, the WhelpWise staff – which includes Copley, a veterinarian and a small army of vet techs and nurses – interprets contraction and heart-rate data provided by the monitors and makes recommendations regarding veterinary intervention. Because the service advises on the labor-stimulating drugs such as oxytocin and calcium injections, it must be used under veterinarian’s supervision.
When labor begins, WhelpWise is able to compare both contraction and fetal heart rates with these baselines, and determine the presence or absence of labor as well as the puppies’ well-being.  The service’s analysis of these critical values can reassure a breeder that all is proceeding according to nature’s plan – or raise a red flag that problems might be developing.
“It’s like a window to the womb,” Copley says.  “With those two pieces of equipment, you’re able to know the status of the bitch and the puppies.” 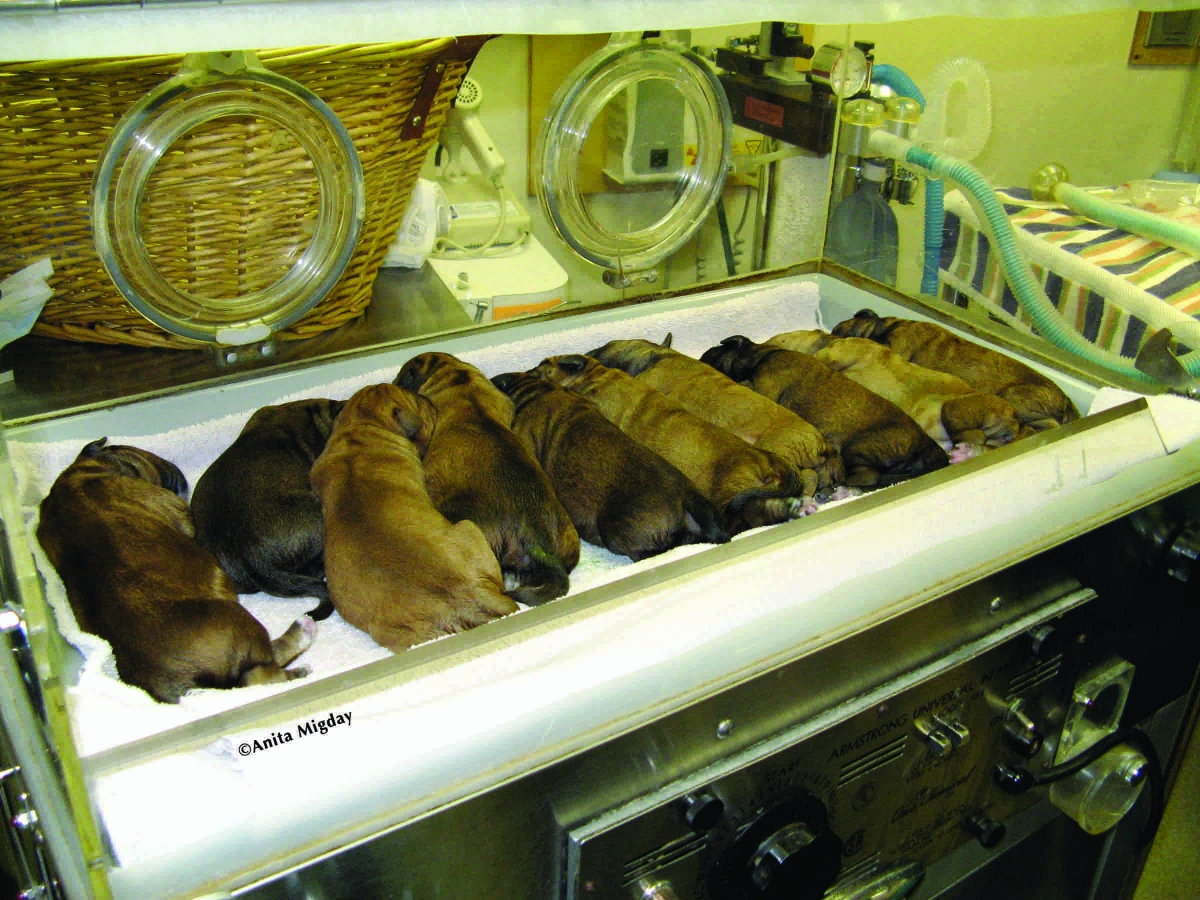 Many Molosser breeds, however, never get as far as labor. “I think many people in these breeds are electing to do C-sections,” Karen says, “because it’s just easier to than to be up all night free-whelping.”
It’s also far safer, says Anita Migday, DVM, of Framingham, Mass., a veterinarian who breeds Bullmastiffs under the Oakridge prefix, and has used WhelpWise to time C-sections on two of her litters.
“My husband is also a vet, and we live seven minutes from his office,” Migday explains. But when one of their bitches got into trouble free-whelping, “just by the time we got her packaged up and over there, we ended up losing three puppies out of a litter of 10.”
So as not to tempt fate, elective C-sections are commonplace in her breed. “That has to do with many of these bitches not going into labor, or going into secondary uterine inertia after the fourth puppy,” she continues. “Breeders are very gun-shy about winding up at the vet clinic at 2 a.m., with the vet saying, ‘Well, I haven’t done a section yet, but I’ll try.’”
Midgay says WhelpWise is invaluable in helping her time a planned C-section and not take the puppies too early, allowing time for milk to come in and maternal instinct to develop.
The drill is simple enough: About a week before the bitch’s due date, the breeder activates the uterine contraction monitor twice a day for one hour, and the data is transmitted over a phone line to WhelpWise. Following the instructions detailed in an accompanying video, the breeder also uses the Doppler ultrasound to locate fetal heartbeats – marking their positions on the bitch’s shaved abdomen with a Sharpie! – and checking the heart rates at least once a day.
Dana Moeller of Redgate Mastiffs in Greeley, Colo., has used WhelpWise for timing C-sections on her last 10 litters.
“I feel more in control of the planning,” she explains, adding that the service lets her pinpoint delivery dates and not waste valuable vacation days waiting and watching for signs of labor. “Mastiffs can be in distress and not show it. They are really stoic. You can you leave and the bitch is as cool as a cucumber, and you come back and there are two puppies in the box and one hanging in the air.”
Being able to monitor fetal heart rates has been invaluable. “Almost every time I’ve done a C-section, it’s because one pup is in distress and the heart rate is lower than 140 beats per minute.”
For Moeller, the proof is in the numbers: In those 10 litters, she had 68 puppies, losing only one. Twenty-five have gone on to champion. 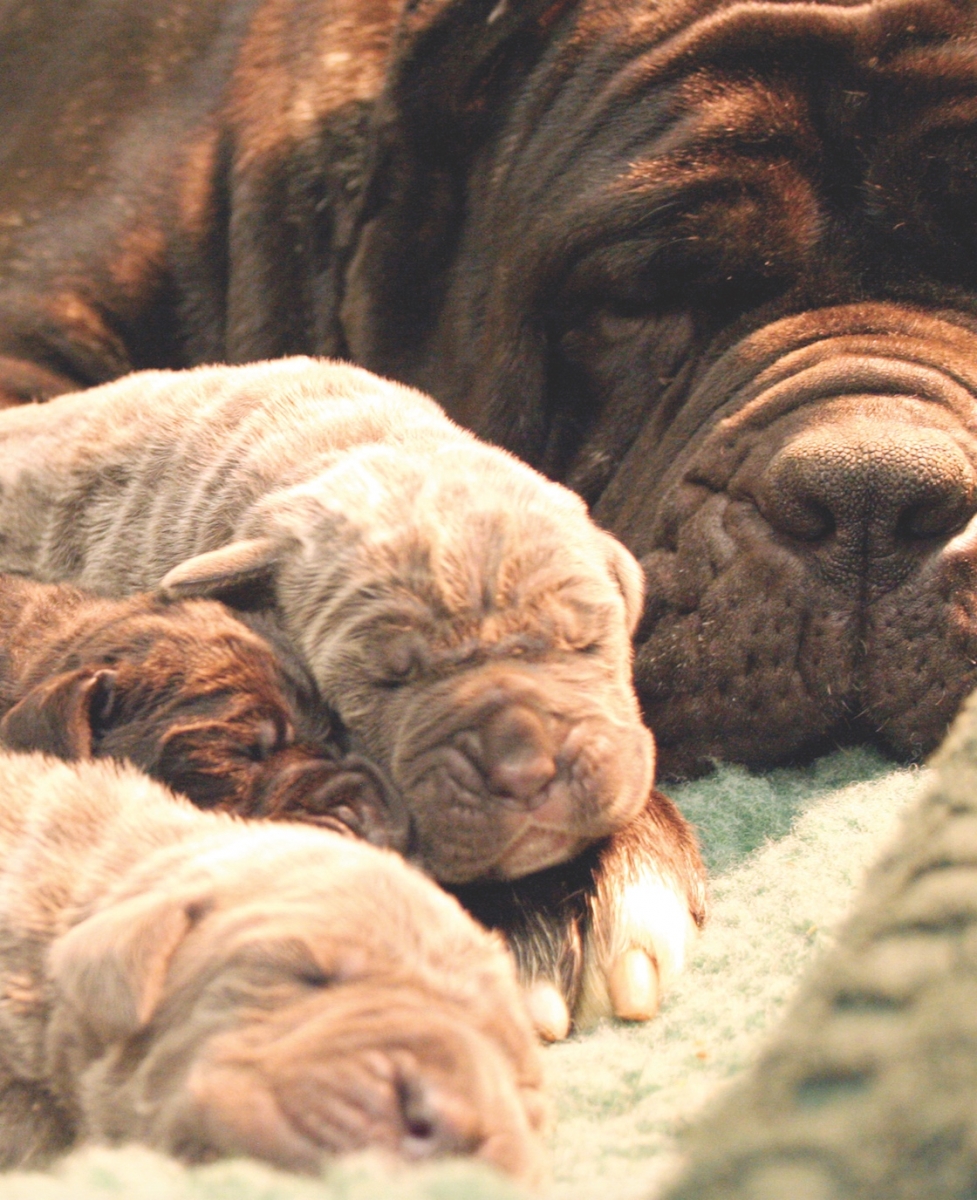 Just a Dab Will Do

For those with Molosser breeds that do free-whelp, WhelpWise lets breeders know when labor is slowing, but long before the bitch shows symptoms of inertia. Using the contraction monitor to measure the nuances of the uterine environment, WhelpWise can calculate micro-does of powerful drugs such as oxytocin, and time them appropriately to avoid the potential of uterine rupture.
“Our goal with the medications is to return the bitch to the prior contraction pattern – nothing more,” Copley stresses.  “You never want to send them into what we call nuclear labor.  It’s hard on mom, it’s hard on the babies, and it doesn’t get the job done any faster.”
Using microdoses of injectible calcium and oxycotin has resulted in thriftier, more vigorous puppies, says Marty Giarocco of Roman Cane Corso in southeastern Pennsylvania, who has used WhelpWise on about 40 of his litters over the last 15 years. “The labor moves along nicely. It’s safer on the mom and the puppies, and easier on the people doing the whelping,” he says. “I’ve had litters with puppies that come every four to five hours – you’re up for two days. Now, once I have the first pup, it’s like, let’s get it on.”
For free-whelpers, perhaps the most valuable function of the WhelpWise service is to know when to throw in the towel, says Jennifer Roberts of Rising Star Bordeaux in Boulder, Colorado, who has used WhelpWise since 1998 on seven litters.
Roberts' most recent litter was out of a European import who had already free-whelped a litter. Based on the bitch’s weak contraction patterns and the puppies’ nose-diving heart rates, WhelpWise recommended a C-section. When the surgeon opened her up, he also found she had ingested three socks, a toy and a towel, which is what had impeded labor to begin with.
“There were 11 puppies, and we saved them all,” says Roberts, who without the service likely would have unwittingly waited until the puppies were in distress before heading to the vet.

While many breeders turn to WhelpWise just before their puppies are ready to greet the world, some use it much earlier to ensure that their puppies stay around long enough to be whelped to begin with. Copley estimates that as many as 90 percent of bitches with unexplained infertility are reabsorbing due to premature labor, with subtle contractions that the WhelpWise uterine monitors, specially designed for premature labor, are sensitive enough to detect.
For Molosser breeds, Copley suggests checking progesterone levels when ultrasound is done to confirm pregnancy. “If you have a normal ultrasound, no reabsorption, good heartbeat, great,” she says. “If you have a small litter, or puppies being reabsorbed, or signs of fluid, which means things are being broken down or there are the beginnings of pyometra,” quick intervention is a must.
Progesterone’s primary job is to keep the uterus quiet and relaxed, and Copley says WhelpWise has been very successful with supplementing bitches with progesterone, and monitoring puppy heart rates daily.
“There are a million different theories on how to give progesterone,” she says, and here is hers: She finds oral progesterones such as Regu-Mate to be least effective. “We see a huge amount of nausea and vomiting, and you can’t test its effectiveness, so dosing is really difficult.” A new oral drug called Prometra is testable, she notes, “but my suspicion is it’s not as effective because of the extreme gastric pH of the dog. We’ve had a very difficult time maintaining consistent blood levels with it.”
Copley prefers an oil-based progesterone, which is injected every three days. “Yes, it’s a shot, and, yes, it needs to go in muscle,” she says. “But because it’s oil based, it’s absorbed over time, and you can test blood levels,” and double-check with the WhelpWise uterine monitor to ensure there are no contractions.
The other advantage of oil-based progesterone that the bitch can be weaned off it at a certain point in gestation, allowing milk and mothering skills to develop.
Copley muses that low progesterone may be the reason many Molosser bitches are less-than-enthusiastic mothers and have issues with milk protection.
Copley also recommends that Molosser breeders do vaginal cultures before breeding. “I think the bacterial issue has a lot to do with fading puppies,” which can be a problem in some of these breeds. Specifically, she finds that mycoplasma, which is a normal flora, can run abnormally high in some mastiffs and Molossers. Copley notes that infections trigger the release of prostaglandins, which in turn stimulate contractions.
In addition to fixed WhelpWise units at veterinarians’ offices and guide-dog foundations, WhelpWise has clients in the U.S., Canada, Sweden and Italy. To ensure availability, Copley recommends that breeders reserve equipment “the minute you breed,” then strongly suggests confirming pregnancy via ultrasound or another reliable method.
Whether or not they use her service, Copley has this advice for breeders: The biggest mistake you make can is to wait.
“Be prepared.  Have an emergency plan,” she urges.  “Know where the emergency clinics are, and call them to find out if there is a vet present 24 hours a day. You’d be amazed at how many are staffed by vet techs who decide whether or not to call the veterinarian.”
And if you are fortunate enough to have a vet who shares her private number, or will roll out of bed in the middle of the night to perform a C-section, appreciate it.
“That vet,” Copley concludes, “deserves flowers.”
© Modern Molosser Magazine. This article may not be reposted, reprinted, rewritten, excerpted or otherwise duplicated in any medium without the express written permission of the publisher.
Mon, 04/02/2018 - 12:33pm