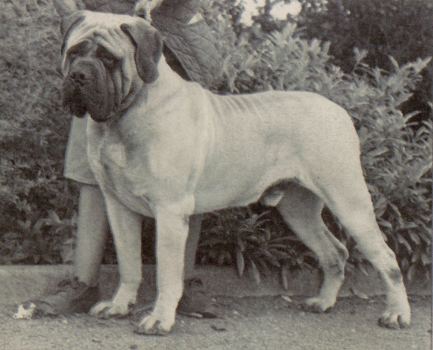 As the Bard told us, all the world’s a stage. And every once in a great while, a character so outsized and riveting crosses it, leaving the audience in a fit of ovations, cheering and begging for more.

Perhaps more than any other Molosser breed, the Mastiff has had its fair share of leading men. And arguably the best known of all – in modern memory, at least – was the British champion Hollesley Medicine Man. Internationally regarded Molosser judge Christofer Habig of Germany, who gave Medicine Man his final champion certificate, doesn’t think it is hyberbole to call him one of the greatest Mastiffs of all time.

“Medicine Man was already a celebrity in his lifetime. He was the ‘brand builder’ for the Mastiff breed we were longing for in those years,” Habig says, noting that the dog was nigh unbeatable during his time in the ring in the 1980s – he won the CC at Crufts four consecutive times, breaking a record that had stood for almost a century. “Medicine Man ‘communicated’ personality, presence, strength and stamina like no other Mastiff around the world at that time.” And like any great “brand,” Habig continues, Medicine Man invited all sorts of strong, emotionally laden attributions, “from Celtic to majestic to impetuous.” At right: Christofer Habig judging Three Counties in June 1883. “I found him in excellent condition, to be superbly constructed, heavy and solid, completely balanced, broad head with excellent jaws,” he wrote in his critique. “His outline exactly combines type, substance and soundness. A great Mastiff with a great Mastiff character. CC & BOB.”

Habig is certainly not alone in that opinion. “Worldwide, I have seen a lot of Mastiffs, and had hands on many. Funny how ‘Ben’ still remains in my top ten,” says breeder-judge Janet Brownlee, who now lives in Australia, going on to quote the standard: “‘Large, massive, powerful, symmetrical and well knit frame. A combination of grandeur and good nature, courage and docility’ – all words that aptly describe him. So if I said he was a well-balanced, powerful-moving, strong and muscular dog with excellent character and temperament, I would just be repeating myself!”

Molosser expert and judge Bas Basch of Belgium says Medicine Man was unusual because he encapsulated two often competing qualities: substance and soundness. Often one of the most massive dogs in the ring, he was amazingly agile, moving like a lightweight.

“He had an excellent front, real forechest, and a lovely, massive and rather long neck for this kind of a dog, which showed that he had a great layback of shoulder that was even more special,” Bosch explains. “He had a real straight topline and rear angulation that we had not seen before, especially not on this type of a dog and in Mastiffs in general. He had a lot of angulation in the hock, and perhaps you would say, later on, perhaps a bit too much given all his substance. But he was never weak, especially when he was younger.

“He had the most beautiful broad-set hindquarters with as strong bone as in front. He was a powerhouse,” Bosch continues. “And he was really squarely set, front and behind, with a lot of width between the front legs and hind legs. And plenty of length of the second thigh, which you don’t normally see in Mastiffs, certainly not when he came along.”

Brownlee calls Medicine Man “a dog of true merit who stood out in the line-up, not merely an OK dog with no particular fault who won enough challenges.” Like any dog, he certainly had areas of improvement. “Thinking of the breed standard as opposed to my personal likes and dislikes, I would have to fault him on too much wrinkle,” she says. “Some pictures of him even suggest he could have had a tad more length of body, but that was not my memory of him in the flesh.” In the United States, Stephen Napotnik of Greiner Hall Mastiffs in Elkton, Virginia, was one of only a few breeders who incorporated Medicine Man into their pedigrees, through sons such as Ch. Honeycroft Danny Boy, Ch. Hollesley Lord Ralegh (who was out of an inbreeding of Medicine Man bred to his sister, Ch. Hollesley Rowena) and Falmorehall Fidelio. At the time many American breeders were reluctant to breed to English dogs, Napotnik remembers, because of concern over lack of soundness and diffident temperaments.

Though he had only seen the famous British dog in photographs, “immediately, we picked up on the type that Medicine Man had that was uniquely different than anything we were seeing in the States,” Napotnik says. “We pursued it as aggressively as we could, to try and capture those genes.”

Napotnik says the Medicine Man blood “fixed type over and over, and he definitely brought that body and the mass to our lines – you could see it immediately.” In addition to a broad, deep body and an abundance of bone, Napotnik says Medicine Man also brought in an intensely dark and well-hooded eye.

Shown in what Habig affectionately calls “the old unpretentious, authentic British style” by his owner Phyllis (Phil) Greenwood, Medicine Man lived in a true English manor and had a pedigree that was equally as classic. But he was, in many respects, a trailblazer, ushering in a new era for the breed – which could be interpreted as a bane or a blessing, depending on your perspective.

“As far as I’m concerned, there is easily an era before Medicine Man and after,” says Bas Bosch. “He started something that you might call the modern Mastiff in terms of the more the better, the heavier the better.” This iconic photo was taken at the Old English Mastiff Club Centenary Show in 1983 by Bas Bosch. “When I remember that day, he was such a tank, such a powerful dog,” Bosch recalls. “But though he was so strong and massive, at the very same time he was so agile he easily could jump on the shoulders of his mistress, who was not that small a lady. So he was then, and perhaps now, a rare Mastiff who was able to enjoy life and who did enjoy life.” Bosch also thinks this photo captures Medicine Man’s great joie de vivre. “The special relationship he had with Phyllis (Phil) Greenwell, his mistress, was so nice to see. He was so charming.” Medicine Man was always shown on this rather rustic lead: His owners bred Jersey cows, “and they just took a piece of rope they used for the cattle,” Bosch remembers, “and used it for him.”

Above, Medicine Man competes at the jubilee show of the Old English Mastiff Club in 1983. British all-rounder Catherine Sutton judged, and, in a loss that still stings his supporters to this day, Medicine Man went only second in the Open class, failing to win even the Reserve CC, which went to his grandson, Williams’ Bulliff Ranger of Bonners. Still, Medicine Man won the Progeny class, and the male and female CCs went to his son and daughter, Bellabees Blunder of Bredwardine and Bredwardine Beau Ide-Al, the latter taking breed.

Habig finds the Shakespearean analogy that started this article to be a very apt one in that respect. Like the tragic hero whose great strength is also his greatest weakness, Medicine Man ignited an appreciation for a Mastiff of great substance and presence, but also tempted some to go for too much of a good thing, sometimes leading to dogs that were too “wet,” too massive and too low stationed. From left, Medicine Man with his owner Phil Greenwell and his sister Ch. Hollesley Rowella with their breeder, Pamela Day.

“You won’t get a hero without ‘another side,’” Habig reminds. “A hero is not just better than the rest, but different. Hence, don’t try to copy a hero!” In Medicine Man’s case, Habig says, some breeders and even judges tried to replicate his success, “thinking that a particular version of heavy bone and feet, a particular size of skull and amount of wrinkle or a particular type of deep-set balance or length of loins should be reproduced in a single-minded fashion. This of course seldom works,” Habig continues, “as in most cases it does not reproduce the ideal but creates an unbalanced, sometimes even irritating and disturbing ‘too much specimen.’”

For a cautionary tale of where these “often over-ambitious attempts” can lead, Habig points to Neapolitan Mastiffs, which have reached a crisis point in terms of being overdone. “Don’t try to produce heroes, but go for balanced, quality dogs,” Habig advises. “And if you are very lucky, you might even breed a hero in your lifetime.”

For Habig, Medicine Man’s greatest legacy was his ability to conjure the essence of the breed, a sense of its ancient roots. He was “something to feel proud of, to admire, to go for.”

In his time, and even today, Medicine Man had his detractors – those who could not see him for the game changer that he was. “A grand dog needs an expert audience to support it with a particular philosophy, ready to hold ‘their hero’ in high esteem,” Habig says. “And, in spite of opposition, Medicine Man was lucky to have that audience.”

Medicine Man was whelped in 1978, a deft melding of some high-profile British pedigrees.

Medicine Man’s mother, Ch. Devil Dancer of Hollesley, was a daughter of the famous, and controversial, Ch. The Devil from Wayside, a brindle who had particularly good rear angulation for his time. (The Devil was a source of tongue-wagging because his maternal great-great-grandmother was a Dogue de Bordeaux erroneously registered by the American Kennel Club as a Mastiff. Devil also reportedly had a sharp temperament, an accusation that was also leveled against Medicine Man, though those who knew him say nothing could be further from the truth.) Medicine Man was bred relatively few times, but his offspring and particularly his grandchildren had a tremendous impact on the breed in the United Kingdom.

“I think that the best time in England was when he was used a lot as a sire,” says Bas Bosch, adding that the Medicine Man progeny “were quite different from the champions you’d seen before.”

“I think he raised the bar, as did his offspring,” adds Janet Brownlee, who ticks off some of them: the “stunning” Ch. Cedwalla Sweet Ellenor, dam of Ch. Cedwalla Miss Edwina; Ch. Honeycroft Dolly Daydream, dam of Ch. Honeycoft Eliza; Ch. Glynpedr Dom Perignon, sire of Champion Dignified John at Jengren; and Ch. Glynpedr Tizer, sire of Ch. Zanfi Imperial Eagle of Glynpedr.

“And of course it does not end there,” Brownlee continues, “as the grandchildren all went on to produce quality Mastiffs such as Ch. Bulliff Warrior, Falmorehall Hudson of Bournewood, Ch. Mr Snowman of Andwell, Ch. Darkling Paddington Bear JW, Ch. Prixcan Countach, Ch. Chevelu Blodeuwedd of Bredwardine, Ch. Cedwalla Sweet Charity and of course the UK breed record holder Ch. Lady Lavinia.”

Here are some Medicine Man daughters and sons, with their successful offspring: © Modern Molosser Magazine. This article may not be reposted, reprinted, rewritten, excerpted or otherwise duplicated in any medium without the express written permission of the publisher.
Mon, 08/24/2015 - 4:05pm