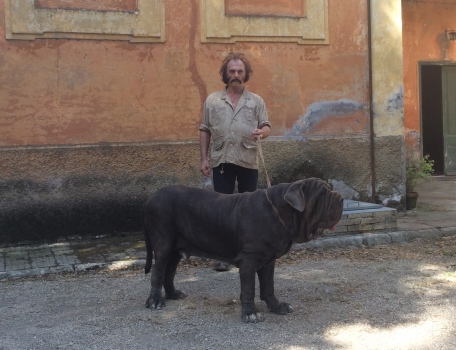 The Mastinaro Who Would Be King

In one of Rome’s trendiest neighborhoods – and on one of its most age-old streets – lives Uberto Gasche, descendent of an ancient royal family, and a Mastino Napolitano breeder of worldwide note
By
Denise Flaim

Driving down one of the most ancient roads in one of the world’s most ancient cities, I am looking for another echo of Italy’s glorious, antiquity-choked past: a famous Neapolitan Mastiff kennel called Bengasche.

Today, Via Salaria in Rome is dotted with five-star hotels and boutiques, trendy enough to have been included in one of those “ultimate hipster” travel guides on the Internet. But before Rome was even Rome, an ancient Italic tribe called the Sabines used this thoroughfare to travel to the marshes of the Tiber River, where they procured salt to extend the life of their foodstuffs.

Of course, Rome is the ultimate example of preservation of all that seems impossibly perishable, which is precisely what prompts my visit: I want to meet Uberto Gasche and see his Bengasche dogs – a traditional kennel of big, booming Mastini smack in the middle of cosmopolitan Rome, which has improbably resisted the modern world elbowing in all around it.

Every serious Mastinaro eventually makes the pilgrimage to Gasche’s kennel, as surely as other Roman tourists ogle the Coliseum or crane their necks at the Sistine ceiling. You’ve probably seen the by now-iconic photographs of Gasche holding a dozen or more of his Mastini – bundles of bestiality, held by thin leashes. Uberto Omar Gasche is not just a Neapolitan Mastiff breeder of worldwide note: He is also an artist – nudes, with and without dogs, are his specialty – and an aristocrat, descending from one of the oldest royal families in the world, the Savoys, who have been ruling parts of Italy, on and off, for more than a millennia. Gasche’s great-grandfather, King Vittorio Emanuele, lived at Villa Ada, now part of the Roman park of the same name where I am heading, until he abdicated the throne to his son Umberto and went into voluntary exile in Egypt in 1946. Barely a month later, in a repudiation of the family’s cozy relationship with Mussolini, Italians voted in a referendum to banish all male heirs of the house of Savoy from Italy. Gasche, whose father was a Swiss industrialist, was born and raised in Alexandria, which explains his predilection for wearing the occasional fez.

I turn the rental car into the unpaved road at the mouth of Villa Ada, which is, at 450 acres, the city’s second largest public park. All around me, insouciant Romans stroll with their elderly poodles and shrub-sniffing terriers. A black sedan crunches past, filled with serious-looking men in tailored suits and dark sunglasses. They headed in the direction of the Egyptian embassy, located in Vittorio Emanuele’s erstwhile villa. There is a connection, presumably, between the Egyptian-controlled private section of the park and the Italian royal family’s postwar exodus; in recent years, the city of Rome has tried, unsuccessfully, to regain control of the whole park.   I drive past towering holm oaks and demure fan palms, unsure where to turn. There are some private homes along the perimeter of the park, but none look quite right. A quick call to Gasche’s cell phone, and soon he emerges from the greenery in his omnipresent khaki shirt, guiding me past driveway gates covered in willow twigs, toward the faded ochre Villa Savoia.

Gasche’s line of descent from the Savoys is matriarchal, which explains why he was permitted back into the country long before 2002, when the provision against male heirs from the House of Savoia was finally lifted. His maternal grandmother, the famed beauty Princess Iolanda Margherita Milena Elisabetta Romana Maria di Savoia, was the eldest sister of Umberto II, who ruled Italy for barely a month before following his father Vittorio Emanuele into exile. Princess Iolanda’s oldest daughter, Countess Maria Ludovica Calvi di Bergolo, was Gasche’s mother. Gasche poses with a Greyhound -- he loves that breed, too -- for an iconic photo that appeared on the cover of one of his photography books.

A decade ago, the London Times wrote a story revealing that if it wasn’t for a British law enacted in 1701, today Gasche would basically be Prince Charles.

“Had the Act of Settlement not banned monarchs from marrying Catholics and enshrined male primogeniture — the law that boys leapfrog their older sisters to the throne — Signor Gasche would be the heir to the throne, The Times and Burke’s Peerage have discovered,” the paper wrote, envisioning that in that alternate universe, “giant wrinkled mastiffs would pad around the gardens of Buckingham Palace rather than Corgis.” Though Gasche’s long-time girlfriend and co-breeder, Danish-born Annette Briesemeistea, told the paper he would make a very charismatic king – she described him as “a cross between a gypsy and ancient Russian nobility” – Gasche admitted he wouldn’t have relished the idea of living in Buckingham Palace.

What he does share with the British, however, is an unbridled love of dogs. Gasche travels to England every March – not to contemplate his unrequited kingdom, but to visit Crufts.

“Every year of my life, I have gone to Crufts, since I was 14 or 15 years old, and every year I return contented,” says Gasche, now 65. “I go to watch the Great Danes and the English Mastiffs. I don’t watch very many Neapolitan Mastiffs, because I don’t like the ones outside of Italy. They’re small – they aren’t good Mastini.”

We walk to his outdoor kennels, where the Neapolitan Mastiffs clearly fulfill Gasche’s vision of a dog that looks like it could have walked into a Roman amphitheater: The Mastini are dripping in bone, with lots of wrinkle. There are also several English Mastiffs, an elderly Great Dane, a couple of Saint Bernards and an Irish Wolfhound with a newborn litter. Gasche once kept Greyhounds, too, though there are none at the kennel at this moment. The barking is cacophonous. "Two Italian, two Irish, one English," read the post accompanying this photo on the Bengasche Facebook page. Can you identify the three giant breeds lolling in the shade at Villa Savoia? Photo courtesy Uberto Gasche.

Gasche’s arrival in Italy as an 11-year-old coincided with the acquisition of his first dog, a German Shepherd. “After that, I had many hunting dogs, because I hunted a lot – pointers, setters, those kinds of breeds,” explains Gasche, whose first name, after St. Hubert, patron of the hunt, is fitting. “After that, I had many Labrador Retrievers, which I also bred.”

As the hunt began to wane in Italy in the 1970s, so did Gasche’s breeding program. Visiting the kennel of his friend Giuseppe Benelli, with whom he also had dogs, Gasche saw his first Neapolitan Mastiff, a female that “made quite an impression on me,” he remembers. “I went nuts. I told him, this, this was the breed that I wanted.”

The bitch didn’t get along with other dogs, however, and the Villa Savoia property wasn’t yet fenced, so Gasche opted not to take her, though he went to the kennel to visit her often. Eventually, he acquired his own stock. "Sempre lo stesso senza tempo ne ordine," Gasche wrote on the page opposite this photograph in one of his photography books. "Always the same, timeless and without rules."

We settle in the garden behind the stuccoed villa. Periodically, beyond the lush foliage, we hear the chatter of dog walkers in the park, the whoosh of traffic and the insistent siren of a passing ambulance.

Modernity has intruded just as persistently on the breed Gasche loves, to the point where he says today only a handful of his Italian peers – such as Vincenzo Manna of the Stradone Vesuviano kennel and Santino Ardolino, who uses his last name as his kennel name – are breeding true type, instead of the lighter-boned, smaller-stationed dogs that have become politically correct today.

“The size of the dog is very important, because without it, the dog is not a Mastino,” Gasche says. “For a Mastino to make an impression, it has to be large, tall, strong. It can’t be a medium-sized dog with less bone. And they were never this way.”

In selecting dogs for his breeding program, Gasche notes that good structure, along with good bone, are very important to him, as is a correct head. But predicting how these will develop in a promising puppy is an altogether different matter.   “In certain litters you can predict, but in others the dogs turn out totally different. You just have to wait,” he says. “You don’t see it at two months. People say that because they want to sell them at two months, but it’s not that way. You can see much more at three months, four months right away. Then you begin to understand something.”

Of course, there is the rare dog that grows proportionally throughout its life, never going through an ugly phase, but this is the exception that proves the rule. “Most of them aren’t like that,” Gasche says. “It’s like with people: It’s not like at 11 or 12 or 13 or 14 years old that you are at your prime.”

As puppies, he says, Mastini should have adequate wrinkle, but not a “tremendous” amount. “Just enough,” he explains. “They have fewer wrinkles when they are small than when they are grown. The wrinkles come with time.” Gasche invites me inside the villa to look at his photography, which lines the white walls of his office. Women and dogs are his main loves, he says, and the subject matter reflects that: There are Mastini and Greyhounds, and many more nudes. The photos have a dreamlike quality, a sense of timelessness. On the table that dominates the center of the room are loose photographs for the next book Gasche is contemplating, his fifth. Another photograph by Gasche, printed across two pages in one of his books. Like his dogs, Gasche's photography transmits a sense of time-misted antiquity. Photo: Denise Flaim.

The camera lens may capture a moment in time and immortalize it, but the world is relentless in its appetite for change. Gasche says he has had a few setbacks in his kennel: Once, his dogs were beset by Leishmaniasis, which is transmitted by sandflies and ravages the internal organs. Then, the city prohibited him from breeding because authorities said he had too many dogs. Nuur Del Bengasche. Photograph by Marco Leonardi.
“In fact, I had to start again,” he says. Gasche located Nuur di Bengasche, a dog from his bloodline who was owned by Steve Cox of Ravonley Mastini in the United Kingdom. “I brought that dog here, we did some breedings, and we got some pretty good dogs again,” Gasche says of “Nuur,” whose name means “light” in Arabic. “All the dogs we have here are all nieces and nephews or daughters and sons of him.”
Gasche has called Villa Savoia his “island,” a buffered haven where he can indulge his creative impulses, both through the camera lens and in the whelping box. And against all odds, it continues on, a study in anachronism: a kennel of lumbering Mastini in the heart of a cosmopolitan capital, run by a fez-wearing, nude-loving, aristocratic Anglophile, a mastinaro who would be king.
© Modern Molosser Magazine. This content may not be reposted, redistributed or otherwise duplicated in any medium without the express written permission of the publisher.
Thu, 12/22/2016 - 6:09am