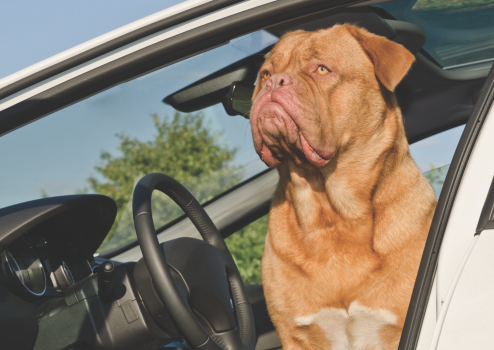 Have Dogue, Will Travel

Every time we start thinking about vacation, the first problem is finding a place to leave our beloved Dogues.   We live in Moscow, with its blocks of densely inhabited apartment houses, and very few people will agree to stay with our two huge Dogues de Bordeaux: Candy, who’s 6, and Ginger, 2½. On the one occasion that we did find someone to leave our dogs with, we returned to find they hadn’t been cared for very well. So, on our latest trip, we decided to find a way to travel with them. Posing pretty, with Florence as a backdrop.

Luckily, our dogs are big fans of traveling by car. However, any long journey with them requires taking an awful lot of stuff. A regular car would just not make for a comfortable trip for two regular-sized people and two super-sized dogs. Then we came across an article about traveling by motorhome. In Russia, traveling with recreational vehicles is not at all popular. Neither is traveling with dogs – especially large breeds like our Dogues. (Even Russians who crisscross Europe to attend dog shows do so on special chartered buses that leave from Moscow and St. Petersburg; few travel in their own cars.) So we decided to be pioneers on both these fronts. And we were lucky to find a local motorhome-rental service in Moscow, one of fewer than 10 small companies like this in all of Russia.
In anticipation of the trip, we prepared far more documents than were necessary, including passports for ourselves and health certificates and rabies antibody tests for Ginger and Candy. But once we hit the road, we didn’t have any problems with paperwork, and at some border crossings, we were expedited past long lines because we had dogs with us. Posing pretty, with Florence as a backdrop.

After a lot of discussion, we ended up choosing Italy as our main destination. It has many landmarks, delicious сuisine, beautiful scenery, two seas and a number of picturesque lakes. And the fun part was that the distance to our destination was much farther than we four had ever traveled by car before – almost 3,000 kilometers, or more than 1,850 miles, one way. Quite a trek!

Finally, our departure day arrived. Having put half our apartment into our new mobile home, we set off in the early morning for our three-week journey. Our plan for the first day was to leave Russia by traversing the Republic of Belarus and arrive in Poland by the end of the day, about 1,000 kilometers, or 620 miles, later. And we made it.

We were initially a little bit worried about how our dogs would put up with such a long day of driving. We made stops every few hours to walk and exercise them a bit, but overall the trip seemed to be quite comfortable and pleasant for them. At first, they tried to stay awake and remember the way back home, but soon they gave up, relaxed and started to enjoy the new places and experiences. Vacationing with dogs – not to mention Dogues – and traveling in a motorhome are both relatively uncommon in Russia.

As you might imagine, the motorhome wasn’t the roomiest conveyance, but we let the dogs sleep on the double couch while we drove, as well as at night. Our Dogues always want to be with us, and they follow us from room to room in our apartment at home, so they didn’t mind the close quarters. (Being relatively inactive, Dogues do not require a lot of space and do quite well in an apartment, though of course nothing compares to living in a private house with its own fenced garden. In the summer we spend weekends and vacation time in our country house.)

The only negative were the many ticks in some places we stopped at along the way. That meant using extra doses of tick repellent, along with regular visual inspections of the dogs after each walk. Swimming in a mountain lake is great exercise.

Because we were traveling in late September, well after the peak of tourist season, crowds were not a problem. We always had plenty of choices at campsites, and we selected the spots with the most privacy and shade – and a tree on which to tether the dogs. The first thing we did after parking was to set up a special area for the dogs with carpeting, toys and bowls of fresh water.

We were surprised to find some camping sites located inside historic cities. For example, the camping in Florence was a five-minute walk from Michelangelo Square, with its famous panoramic view of the city.

Because Europe is so dog friendly, we were quite free to take ours anywhere, but we tried to avoid exposing them to midday sun and heat. So our forays with them were mostly in the mornings and evenings, especially in big cities. When the dogs stayed in the motorhome, we made sure it was parked in heavy shade, with open windows and the fan turned on. It wasn’t terribly hot, with the temperature never getting higher than 28 degrees Celcius (around 82 Fahrenheit), so they were totally safe and comfortable. The girls in their fancy collars in the riverside town of Szentendre in Hungary.

We also visited a beach especially for dogs on the Adriatic Sea. It was great fun, with special beds, umbrellas and bowls for each dog. But thanks to the off season, we were free to take them to nearly every beach on the Mediterranean, as well as many beautiful lakes. It was the first time Ginger and Candy had encountered the surf, so they initially were a bit afraid of the waves and surprised at the salty water. But they got used to it very quickly, happily running to fetch a toy from the water. Swimming is great exercise for dogs, and we try to do it with them as much as possible.

In Europe, most people are very friendly to dogs – even ones the size of ours. (Honestly, sometimes our recreational vehicle with its Russian license plates was more of a surprise to our neighboring campers than the dogs themselves.) We heard a lot of positive comments about our Dogues, and some people (especially Japanese tourists) were so excited that they asked to take pictures with them. Posing in front of the Adriatic Sea.

In Florence, we took the dogs out early one  morning to photograph them in the empty cobblestoned streets. While taking pictures of them against this beautiful city panorama, we realized that many other early-bird tourists were crowded behind us, holding their cameras out to take pictures of our dogs, too.   In one campsite in Italy, we stayed next to an elderly German couple. At first they were a little bit cautious about our dogs, but very soon they got acquainted with them, bringing them sausages and cookies. Both our dogs were very happy and friendly – sometimes even a bit too friendly – to all the new people they met.   On our way home, the customs official who was inspecting our car at the border invited a group of his colleagues over. They all peeked into our vehicle and laughed loudly. It turns out that one of our dog’s faces closely resembled their boss.   During our three-week journey, we visited two seas, two Italian lakes (including the beautiful and exclusive Lake Garda), Belarus, Poland, Slovenia, Slovakia, Hungary, Austria and Germany.   Over those 7,500 kilometers (almost 5,000 miles), we were very impressed and satisfied with this way of traveling. Traveling in a motorhome gives you extra freedom, and all the comforts of a home “on wheels.” But most important, it gives you the opportunity to travel with your dogs – even the big ones.

Maria Sidelnikova and Vitaly Titov are professional photographers with almost a decade of experience, specializing in animal, travel, child and portrait photography. Their small private studio welcomes subjects ranging from guinea pigs and doves to young families with children. They have also worked for the marketing departments of large international companies. Their portfolio is available at www.zharastudio.com.

© Modern Molosser Magazine. This article may not be reposted, reprinted, rewritten, excerpted or otherwise duplicated in any medium without the express written permission of the publisher.
Tue, 11/24/2015 - 1:30am

Red Alert
If you are getting a Neapolitan Mastiff puppy (or a Cane Corso, for that matter), this veterinarian-vetted article about a common eye problem is a must-read.