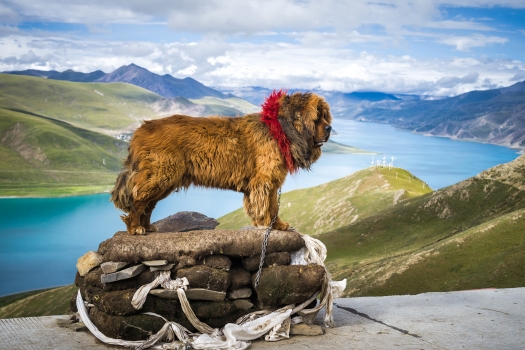 Tibetan mastiff posing on a pedestal beside Yamdrok Lake in Tibet, China.

Tibetan Mastiffs are genetically wired to cope with dizzying altitudes ... and scientists say they crossbred with wolves to get that way
By
Denise Flaim

For centuries, Tibetan Mastiffs have been renowned for their ability to cope with high altitudes, living as they do in the mountains of Tibet, where elevations can reach close to 15,000 feet, or almost three miles, above sea level.

As  every Mount Everest climber discovers – sometimes, fatally – the oxygen levels at such stratospheric heights are quite low, often leading to hypoxia, or a deprivation of oxygen to the body and its organs. But the Tibetan people and their dogs have adapted genetically to the challenges of surviving in such oxygen-scarce environs. Now, thanks to genetic sequencing, we now understand just how that evolution happened – and, it turns out, Tibetan Mastiffs have some ancient wolf ancestors to thank for it.

In a 2014 study published in Molecular Biology and Evolution, evolutionary biologists compared the DNA of 32 Tibetan Mastiff with that of 14 gray wolves and 20 Chinese native dogs, the plains dwellers from which the Tibetan Mastiff evolved. The researchers identified a dozen areas in the Tibetan Mastiff genome that helped the dogs adapt to their oxygen-poor environment by modifying such biological functions as hemoglobin concentration, the formation of extra blood vessels, and food metabolization. Tibetan Mastiffs are genetically programmed to thrive in high-altitude, low-oxygen environments like the Tibetan Plateau.

In comparing the dogs to their human counterparts, the scientists found that the two species shared only one similar gene that helped them cope with high-altitude living. The rest of the adaptive genes in the Tibetan Mastiffs were different from those of Tibetan humans, as well as those of yaks and Tibetan antelopes, which have also successfully evolved to live on low oxygen levels. Citing the need for more research, the scientists cautiously posited that spontaneous mutations might have occurred independently to yield similar adaptive advantages, without being genetically connected between species.

But now, a new study offers a different explanation for the Tibetan Mastiff’s unique ability to not only survive, but thrive atop the Roof of the World.

Panoramic view of Himalayan mountains in Tibet, with the peaks of Mount Everest, Makalu and Cho-oyu visible in the distance.

Researchers Zhen Wang and Yi-Xue Li, both of the Shanghai Institutes for Biological Sciences, say Tibetan Mastiffs acquired their adaptive genes for living the Himalayan high life from their wild cousin, the Tibetan grey wolf (Canis lupus chanco). Their data shows that this interbreeding happened some 24,000 years ago, around the same time humans arrived on the Tibetan plateau. In the intervening millennia, Tibetan Mastiffs have lost much of their wolf DNA – with the very important exception of those snippets that helped them adapt to highland living. The Tibetan gray wolf is believed to have interbred with the ancestors of today's Tibetan Mastiff some 24,000 years ago.
In their study, also published in Molecular Biology and Evolution, the scientists compared the DNA of 29 Tibetan canids – including highland dwellers such Tibetan Mastiffs, Tibet gray wolves and Qingai gray wolves; low-altitude Xinjiang gray wolves, Innar Mongolia grey wolves and Yingjiang indigenous dogs; and, as an outgroup, golden jackals.
The Shanghai scientists found that while the Tibetan Mastiffs were more closely related to the Chinese dogs, rigorous selection had preserved a handful of genetic “hotspots” from the Tibet gray wolf, including the EPAS1 and HBB loci, both of which are involved in hypoxic response.
And, tellingly, the same story repeated itself with the Tibetan Mastiff’s human masters: Genetic research shows that altitude adaption in the Tibetan people likely came from ancient liaisons with the Denisovans, an extinct species of hominoids who were closely related to the Neanderthals.
© Modern Molosser Magazine. This article may not be reposted, reprinted, rewritten, excerpted or otherwise duplicated in any medium without the express written permission of the publisher.
Thu, 12/08/2016 - 1:44pm