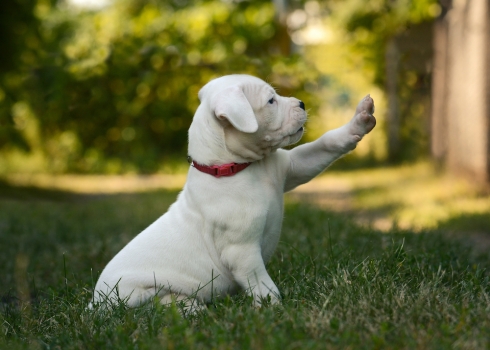 The video arrived via Facebook Messenger. And almost as soon as I clicked, the bedlam began.

The scene was the Srpska Asocijacija Dogo Argentino Klubova, or SADAK, show earlier this month. Just shy of two minutes long, the video shows a dozen or so male Dogo Argentinos entering the ring at this Serbian club show. Intently focused on each other, the dogs snarl and lunge, held back only by the determination of their handlers and their spaghetti-thin show leads. A lone female handler in a spotless white jacket stands like an island of calm amid the melee, her dog perfectly stacked, her frustration evident at the out-of-control display around her.

Even more contentious than the dogs in the video were the Facebook comments, with some unreservedly applauded the performance.

“Love this video … shows what real male Dogos are like,” wrote one fancier.

“It’s nice to see they still have drive,” opined yet another. “These are hardcore working and hunting dogs, not a lawn or show ornament.”

Then there were the critics. “Bad handling all around,” wrote one Dogo owner and exhibitor. “Yes, aggression is expected, but the point is for the judge to be able to see and go over the dog. … don’t need the jackassery if the dog is built right.”

As that Facebook video brings into sharp relief, the Dogo Argentino culture is a unique one, to say the least. The display in Serbia was not an isolated instance: Sitting at a smaller Dogo ring in Italy on the same weekend, I saw a similar display of out-of-control dogs so interested in scrapping with each other that some almost pirouetted around the ring, choked and lifted off the ground by handlers who had no other way to control them.

Who’s right in this debate? To my way of thinking, both everyone and no one.

First, to the Dogueros. Many breed aficionados insist – rightly – on having a dog that maintains the working character of a fearless hunter of big game. There is “fire” in the heart of a Dogo, and, with increased public awareness and impending AKC recognition, Dogo fanciers understandably fear a dilution of the strong character in a breed they love. 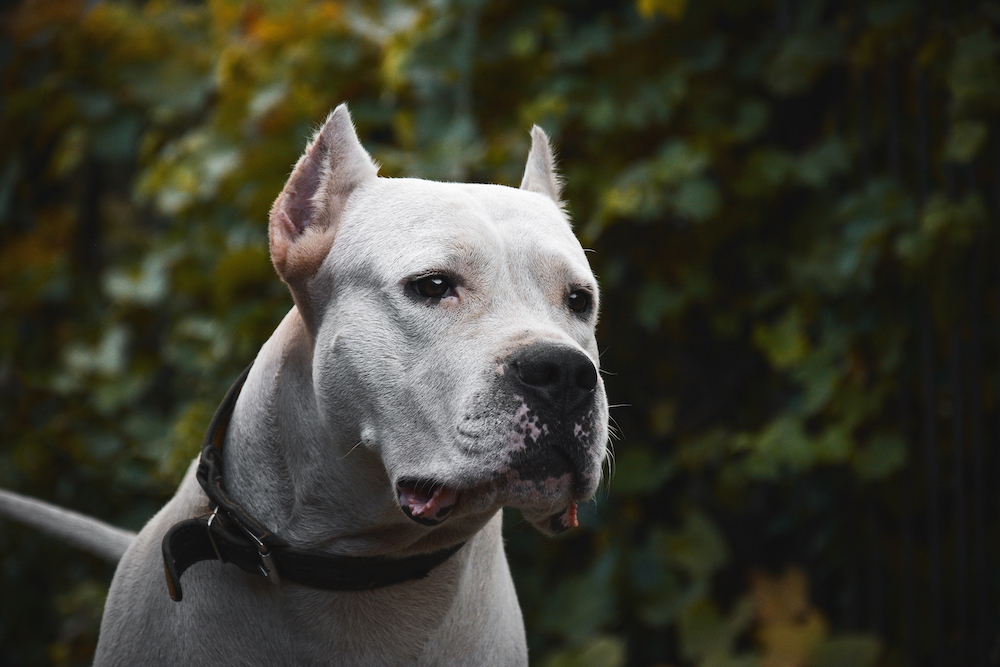 A correctly temperamented Dogo does not know the word "hesitate."

But prey drive has nothing to do with aggression. There is arguably no human-friendlier breed than the Greyhound – that is why, unfortunately, they are a breed of choice for scientific research – but they are killing machines when it comes to fur. At a straight race years ago, I saw a retired track dog suck a tiny piece of the faux-fur lure through his basket muzzle after the drag line stopped. Nothing – not being turned upside down, not having water sprayed up his nose – forced that dog to give up his prize. Now, that is prey drive.

Instead, what some Dogo fanciers value in the ring is simple dog-on-dog aggression. Given that the Dogo has in its background one of Argentina’s most celebrated canine pugilists, the Cordoba Fighting Dog, this is not unexpected. Having a level of intersex aggression in hunting dogs – especially catch dogs who await in their boxes until the game is bayed – is not always impractical; when the dogs are immersed in the kill, the adrenaline rush blocks out everything else. I know from experience that it is quite possible to have three intact male Rhodesian Ridgebacks – the Hound corollary of the Dogo, with the same big-game function, but its gameness tempered with Sighthound blood – run together at a lure-coursing trial. But once the line breaks, and the plastic bag stops moving, the handlers have all of 45 seconds to run into the field and grab their dogs before the fireworks begin.

So, yes, keep the fire of the Dogo Argentino – but recognize that there is a difference between a fire and an inferno. A true gladiator is one who maintains control, even in the face of provocation, without disintegrating into sloppy, senseless posturing. It’s the difference between the poised bouncer and the belligerent drunk, between the Golden Gloves champ and the street brawler. If you have to jump up and down to convince people who you are, then you aren’t that person – or dog – to begin with. You are the embodiment of a Napoleon complex. 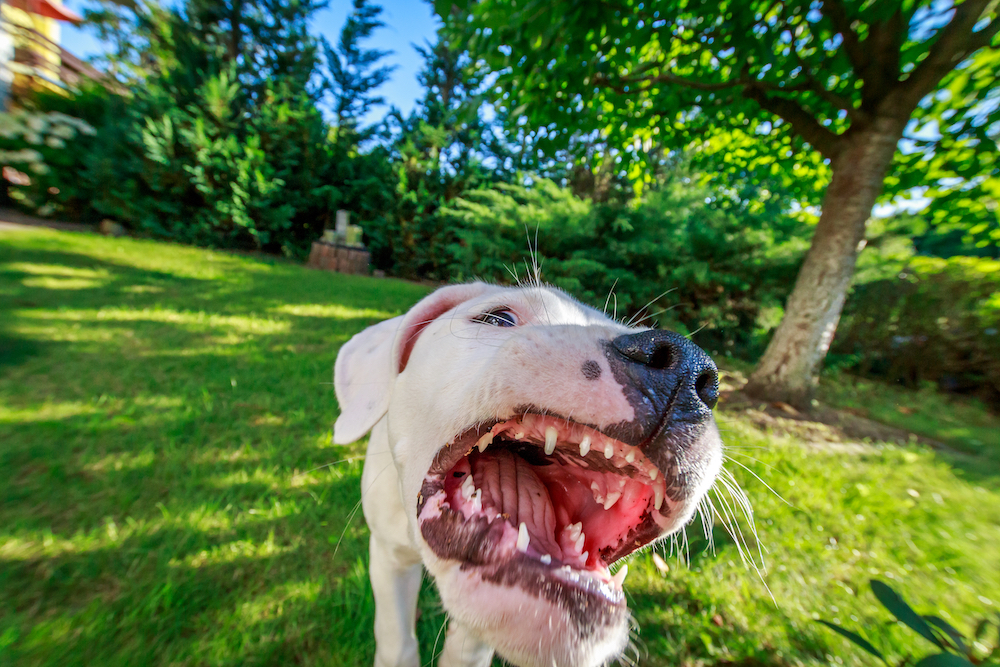 This puppy Dogo is just being goofy. But adults need to be taught impulse control if they are to be brought into the ring to be shown and judged.

For an example of this self-control in the Molosser camp, look to the Tosa Inu. The ultimate fighter, this is a dog that never starts a fight, but is content to finish it – decisively. The Mastiff, too, has been celebrated for centuries for not deigning to fight those beneath him in size or stature.

Returning to the Serbian video, much of the disturbing display had to do with inept handling. Anyone who shows powerful males of any breed knows that to allow them to face each other and make direct eye contact is a recipe for disaster.

One of the comments on the Dogo show in Serbia compared it to sparring in the terrier ring. Yes, terriers are sparred, which means two or three are brought to the center of the ring and expected to “face off” and show “terrier attitude.”

Here is a description of the spar from Kerry Blue Terrier expert Dr. E.S. Montgomery, with emphases mine:

“If they eye each other intently, throwing themselves forward on their front toes, arching their necks, raising their ears to proper Kerry position, stand taut and ready for anything, each waiting for the other to make the first move, and when, neither does – if they wag their tails, turn slowly and return happily to their places, then they are truly Kerry Blue Terriers.”

While a real terrier never backs down from a fight, neither does he lose composure. To snap during the spar and disintegrate into a flash of snarling fur is a failure – on the part of the dog and handler as well as the judge, who miscalculated the distance and energy between the canine contenders. And, indeed, the American parent club advises judges to “put to the side” any exhibitor who allows his dog to lunge and snarl, as that behavior is “not typical of good Kerry temperament.”

Tellingly, dogs in the Terrier Group with bully blood behind them, such as Staffordshire Bull and American Staffordshire terriers, are not sparred, precisely because it is too easy to send them over the brink. (Chihuahuas, however, can be sparred – size has nothing to do with character.) 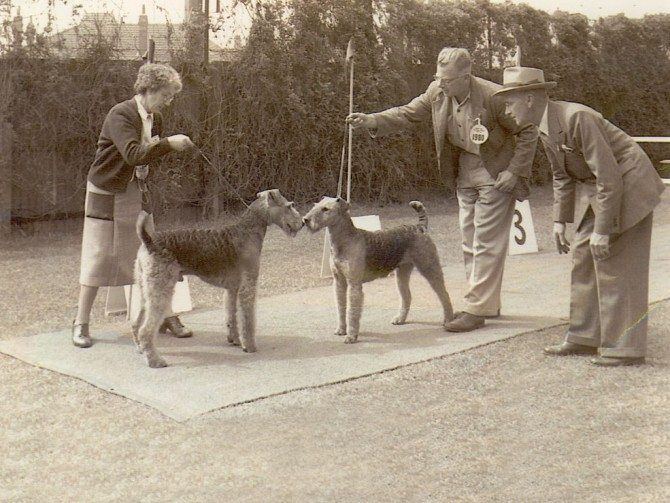 Vintage photo of Airedales sparring. The point is to not lose control.

Anyone who understands American Kennel Club culture – where the control of dogs and safety of humans are paramount – knows the problem of out-of-control Dogos will be dealt with decisively once the breed receives full recognition on January 1, 2020. While occasional grumbling between males can and does happen across many breeds, any dog displaying sustained aggression and a complete lack of control will be ejected from the ring, and rightly so.

Instead of defending this culture of excess, Dogo fanciers should simply get their dogs under control. Serious breeds are more than capable of self-restraint: Does anyone see this anything-goes attitude in the Cane Corso ring? The show ring is for judging breeding stock, and character is one aspect of that. But no one can assess the movement or conformation of a lunging, sputtering dog.

If Dogo handlers don’t understand how their dogs are expected to behave in an AKC show, and train and show them accordingly, then perfectly sound and typey dogs will be excused from the ring because they are too disruptive to be judged adequately. In their absence, inferior subjects will likely be rewarded, and the Dogueros will have no one but themselves to blame.

Judges, too, have a responsibility to acknowledge the realities of the breed and judge accordingly. They should avoid crowding in the ring, break up large classes when prudent, and keep an eye out for inexperienced handlers who might seem in over their heads. While some breeder-judges in South America and Europe inexplicably think nothing of kneeling in front of a Dogo exhibit to examine the bite, judges should use the same conservative tact they take with any serious Working breed: Approach with confidence but respect, do not make prolonged eye contact, greet the handler verbally to establish rapport, avoid distracting accessories like large, floppy hats, and conduct the exam briskly and matter-of-factly, with no lingering. 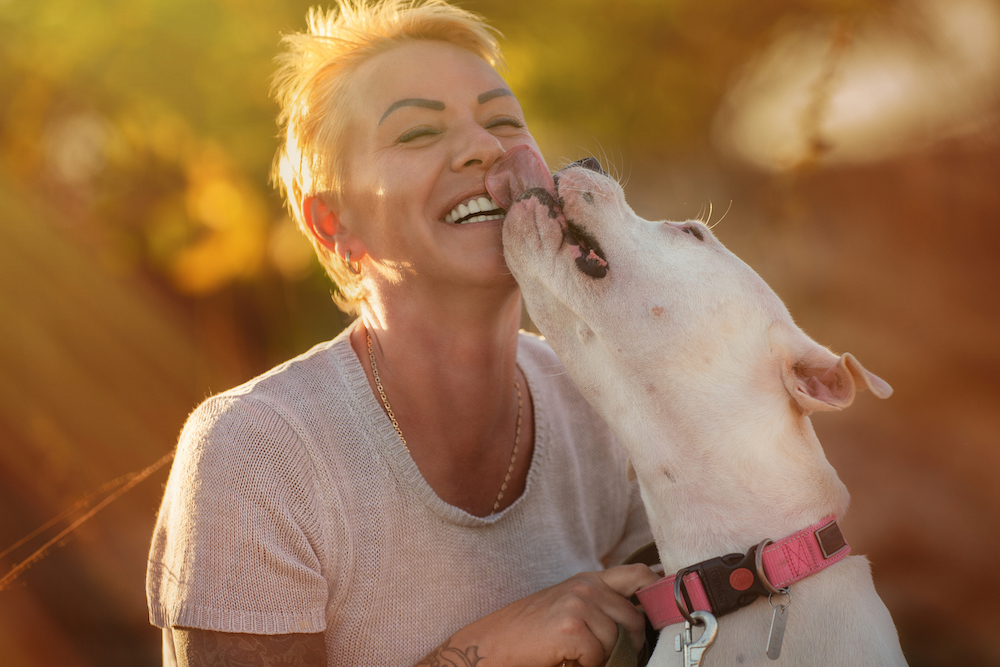 A confident, typey Dogo Argentino should never be human aggressive.

While dog-on-dog aggression, however well modulated, is just a reality in dealing with the Dogo, attacks on humans are an altogether different matter. If breeders in the country of origin have in the past sent their “mistakes” north, American fanciers should not continue to pass the buck. A human-aggressive Dogo deserves the needle – not a bunch of excuses and a Herculean effort at rehoming. One’s love of the breed should always trump love of an individual dog. Dogos are already outlawed in the United Kingdom and Denmark; irresponsible placements, the breeding of insecure dogs, and sloppy sentimentality when hard decisions are called for only give such bans credence. 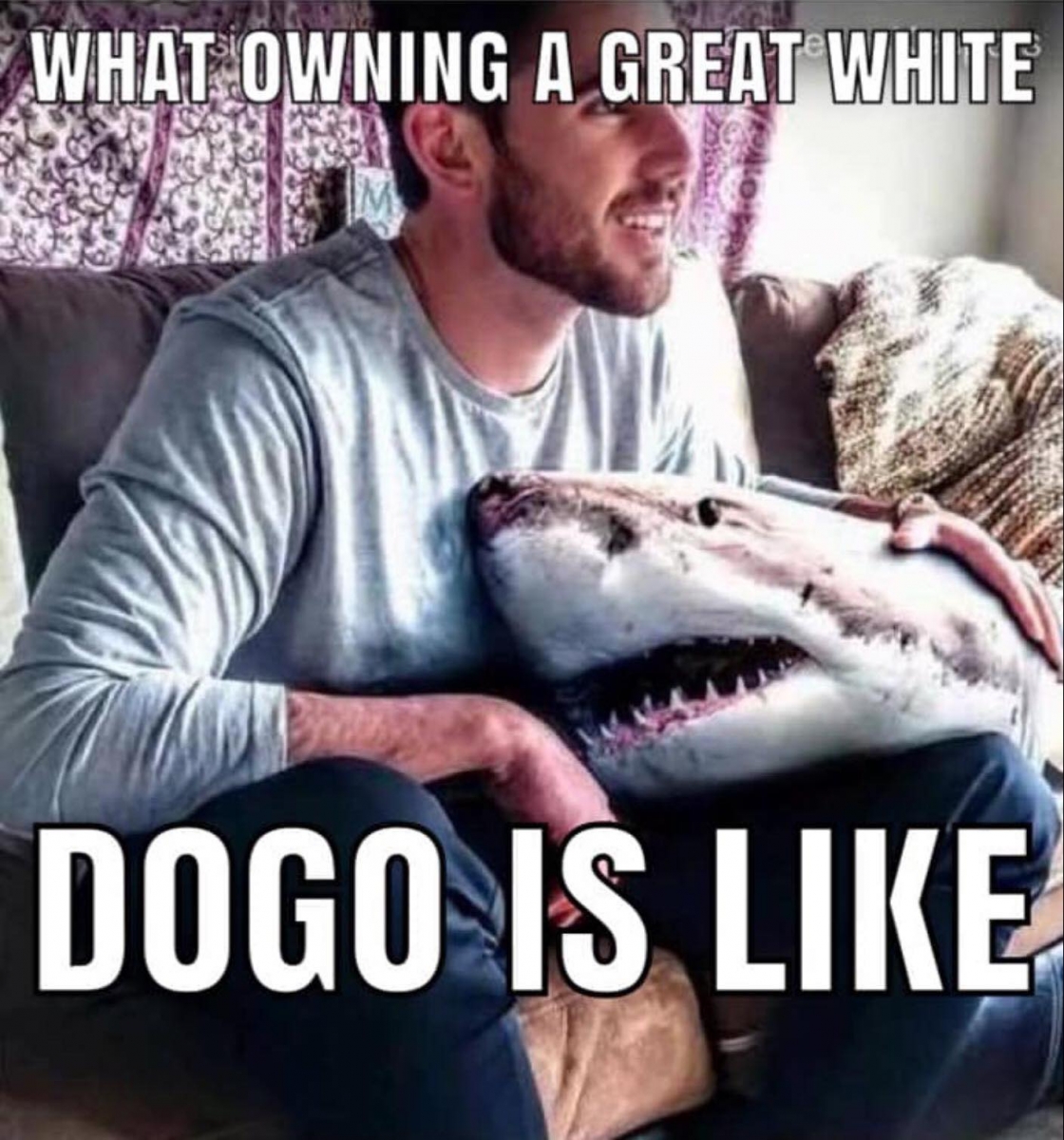 The problem with the histrionics in the Dogo ring would seem to go deeper than just a lack of basic doggie manners. There is a vein of machismo in the Dogo culture that seems to find gratification in having a dog whose behavior reflects everything that society disdains – pure aggression, unrestricted dominance, lethal unpredictability. How else to explains memes like the one pictured here, where the Dogo is compared, gleefully, to a great white shark?

Speaking of those maritime predators, there’s a great line in “Annie Hall” in which Woody Allen tries to break up with his eponymous girlfriend. “A relationship, I think, is like a shark. It has to constantly move forward or it dies,” he explains. “And I think what we got on our hands is a dead shark.”

Dog breeds, which are nothing short of cultural relationships, need to evolve, too. Dogo fanciers in the United States need to decide what face of their breed they want to show the world.

By all means, keep the fire. Just – for the sake of all involved – lose the inferno.

© Modern Molosser Magazine. This article may not be reposted, reprinted, rewritten, excerpted or otherwise duplicated in any medium without the express written permission of the publisher.
Mon, 06/10/2019 - 12:15pm