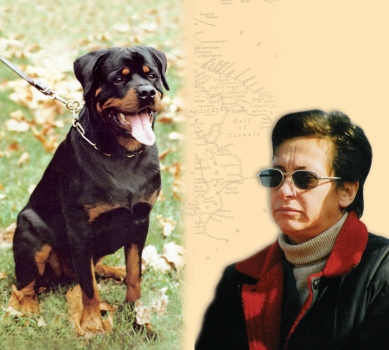 A Moment With ... Carla Romanelli Lensi

Questions and answers with an international Rottweiler authority

An international authority on the Rottweiler, Carla Romanelli Lensi of Pavia, Italy, has been involved with the breed since the 1950s, breeding under the kennel name Della Riva Petrosa. Past president of the Italian Rottweiler club, she is the author of “Rottweiler il Cane” and has adjudicated for every major FCI-recognized Rottweiler club in the world.

First time she saw a Rottweiler: “It was in 1957, at the first Italian kennel for the breed. They were puppies, and I thought they were gorgeous.
I convinced my future husband, who loved German Shepherd Dogs, to acquire a Rottweiler puppy in Germany in 1972, and from there, after a bit, we began breeding them.”
The breed's attraction for her: “It was childhood imprinting. I had a Rottweiler who was my companion and playmate. My first Rott, he made me ever sensitive to the charm of this breed.”
Her mentors: “Unfortunately, there were very few, because at the time my husband and I became involved in the breed, there wasn’t even one litter registered in Italy. So for the first few years we learned everything by taking ourselves to Germany, assisting at their specialty shows and with their judges, at first without dogs and then later with them.”
Greatest error made in breeding Rottweilers: "I think it is not having breed type in morphology or temperament.”
Most difficult virtues to maintain:“I think it is difficult to breed this breed maintaining the right balance between type, construction and character. Also, it’s difficult to get consistency in litters where often in a pick puppy you might find a ‘reject,’ by which I mean a dog that has a fault that makes it only a pet, such as incorrect dentition, eyes that are too light, or severe hip dysplasia.”
Strong points in the breed today:“It seems to me that they are its character, athleticism and the ability to adapt to a thousand different situations.”
And the weak points:“At this moment they are those that involve health – its extreme tendency and probably also genetic predisposition to assorted maladies. I do not think it is the best!”
Unforgiveable fault in a Rottweiler:“Every dog should be considered an individual, unique and unrepeatable, with his own traits, his own faults, his own virtues. Therefore to generalize seems to me a little bold. But one trait that is commonplace and I would say essential is the extreme affection a Rottweiler has for his owner, and the closeness in which he lives in symbiosis with him. So I would say a Rott without a sense of ‘affection’ for his owner is outside of my concept of a Rottweiler.”
Ideal Rottweiler temperament: “Loyal, attentive, with a good temperament and great, great stability.”
Most misunderstood part of the Rottweiler standard: “The Rottweiler standard, like all standards, is only written. Every word is interpretable, every ratio, if it is not defined mathematically, is variable. If one speaks of a croup of medium length, what does medium mean? Medium in respect to a long one, or a short one, because they aren’t defined. If the stop is ‘well defined,’ what are the degrees of the angle with the muzzle? From all this I think we can affirm that seeing as how the standard is written and not visualized, everything is not easily comprehended, because it is all up for interpretation.”
What can you say about the state of the Rottweiler in various parts of the world? “I’d like to note that worldwide there exists a particular attention on the males. There is a widespread belief that whatever the conformation or temperament of the bitch, it can all be remedied with a good sire. Basically, it’s very difficult to find high-quality bitches.”
Most common mistake judges make: “Judges who have not bred have difficulty judging young Rottweilers. Like all the Molossers, the Rottweiler has a particular growth pattern that only those who have bred them know very well.”
Most common mistake breeders make: “It involves construction and rapidity of movement. Very often speed is confused with the best conformation.”
© Modern Molosser Magazine. This article may not be reposted, reprinted, rewritten, excerpted or otherwise duplicated in any medium without the express written permission of the publisher.
Fri, 03/16/2018 - 6:00pm