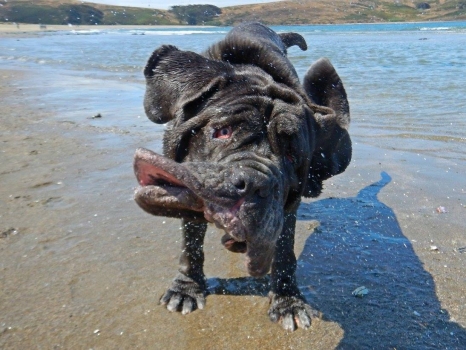 Martha, the world's ugliest dog, gets her shake on at the beach. All photos courtesy Shirley Zindler.

Ugly is the New Beautiful

Ugly is in the eye of the beholder.

Which is why some Molosser lovers were piqued when a 3-year-old Neapolitan Mastiff named Martha was officially crowned the World’s Ugliest Dog. 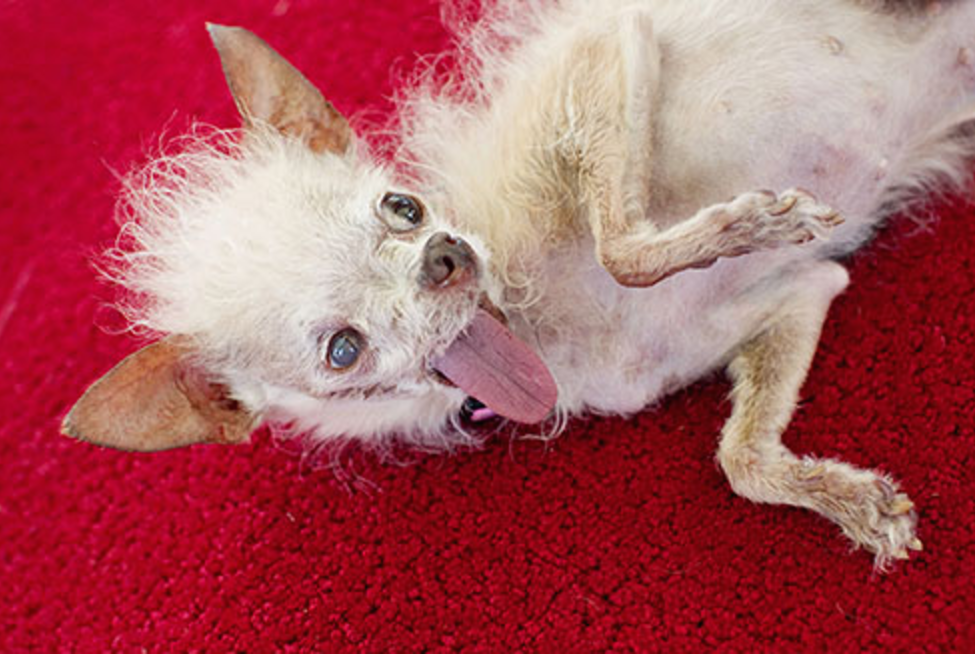 Yoda, the 2011 Ugliest Dog, was a Chinese Crested, the breed that wins this contest more than any other.

For more than half a century, the Sonoma-Marin Fair in Petaluma, California, has been the self-proclaimed arbiter of canine grossness. Over the years, elderly Chinese Cresteds have had the best track record of winning this increasing competitive contest, because aging usually isn’t kind to their kind: Their hairless skin develops wrinkles and get studded with pimples and blackheads, and their mostly toothless mouths are unable to contain their lolling tongues.

But this year, Shirley Zindler of Sebastopol, California, who had been fostering Martha for Dogwood Animal Rescue, decided to enter the 125-pound Neo in the high-profile competition. After all, Martha had just successfully recovered from her surgery for cherry eye and entropion – two ophthalmologic defects that are actually quite common in Neos – and Zindler thought “her uniqueness, her red eyes, her drool and big droopy face” would give her an edge. Not to mention her industrial-grade flatulence – another less-than-endearing breed trait.

Zindler’s instincts were spot on: Martha beat out 13 other Ugly Dog contenders, all of them small enough to be held in their owners’ arms. (The runner-up was a dog more than five times Martha’s age – a 16-year-old Brussels Griffon-Pug mix named Moe.)

But what rankled some dog lovers was that Martha looks like … well, like a perfectly normal Neapolitan Mastiff.

“We have a certain amount of sympathy for the judges of the competition, they can’t give it to a haggard-looking rat dog every year,” wrote a reporter for Gizmodo.com, who admitted that Martha does turn into “a puddle of pancake batter” when she flops down for a rest. But “she’s still pretty cute and way more pettable than the rest.”

Some Molosser mavens were far more pointed in their criticism. 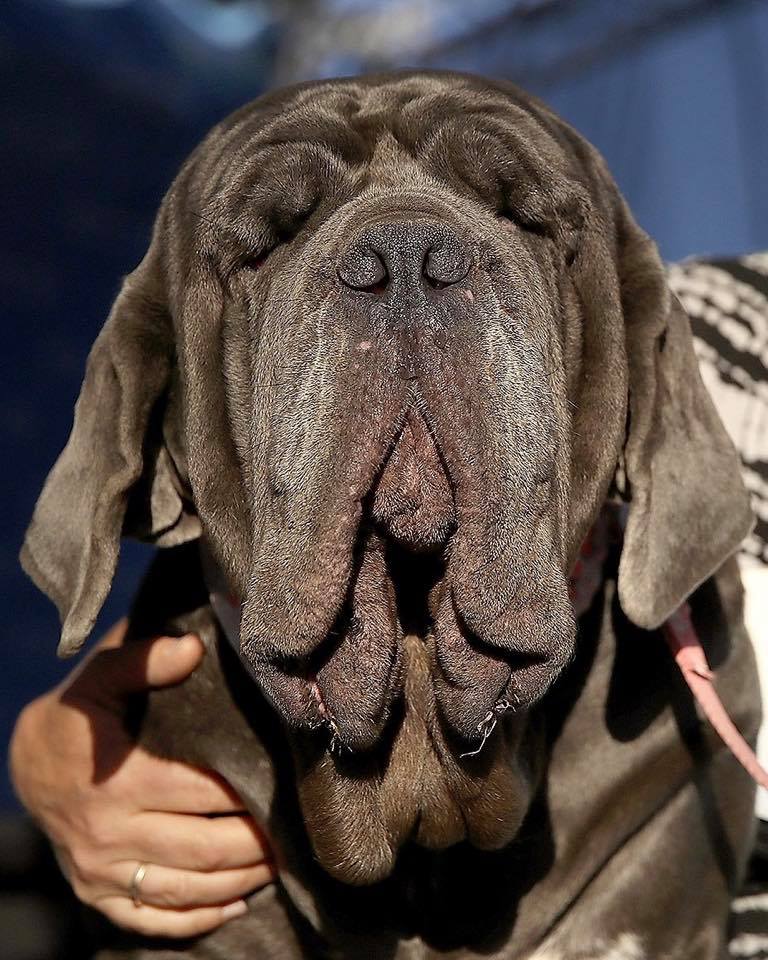 Some Molosser lovers protest that Martha is really your average Neo.

“As a Mastiff owner myself, also a rescue – it is disheartening that u even admit to having her win an 'UGLY CONTEST' for your benefits,” complained one vocal commenter on the rescue’s Facebook page. “You brought negative attention to the breed that was unnecessary.”

“I hope this doesn't cause a surge in irresponsible ownership in Neos. They are not for everyone,” worried another Facebooker. “As far as being ugly .... I don't think so … Laid back, drool and gas are all part of the package. They didn't mention hard headed, possessive, territorial and protective of their owner.”

“This is fake news,” announced another Martha fan on Twitter, responding to BBC coverage of the contest. “Martha is a great doggo.”

Zindler is philosophical about some of the critical comments that Martha’s win generated. “One of the amazing things about dogs is their lack of ego,” she says. “The contest promotes adoption of dogs that aren't as traditionally ‘attractive’ as others. As a long time animal control officer, I see sad, terrible things every day. A group of beloved and adored dogs being celebrated for their uniqueness is wonderful.” 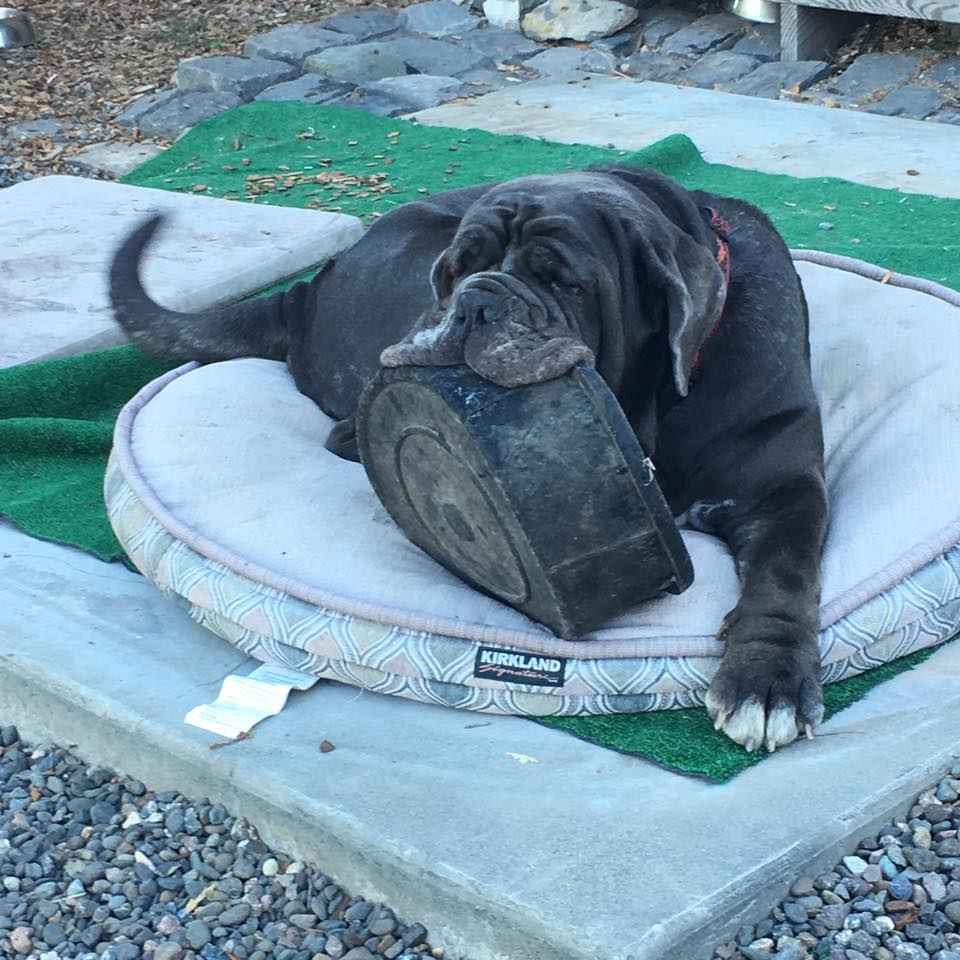 One of Martha's prized possessions in her new home is this heavy-duty plastic bucket: She carries it everywhere.

Martha certainly got her 15 minutes of fame, and then some: She was featured in newspapers, magazines and websites across the globe, and even flew cross-country to appear on the Today Show. And once the publicity receded, a forever home waited: Zindler reports that the media-savvy Mastino was adopted by a family who lives on 11 acres and has experience with giant breeds, including a resident Saint Bernard who’s become Martha’s best friend.

Martha's new owners keep her fans updated on a Facebook page devoted to her, and make her available for rescue fund-raisers.

"Ugly is the New Beautiful," announced a poster at one of Marthaa's events. We couldn't agree more.

© Modern Molosser Magazine. This article may not be reposted, reprinted, rewritten, excerpted or otherwise duplicated in any medium without the express written permission of the publisher.
Thu, 08/24/2017 - 8:54pm

Greyt Expectations
We interview Jennifer Willshire of Gammonwood Mastiffs, who rocked the Mastiff world recently by unveiling a backcross breeding that crossed a Mastiff bitch to a Greyhound to produce a litter of “Greydogges.” Let the controversy commence.