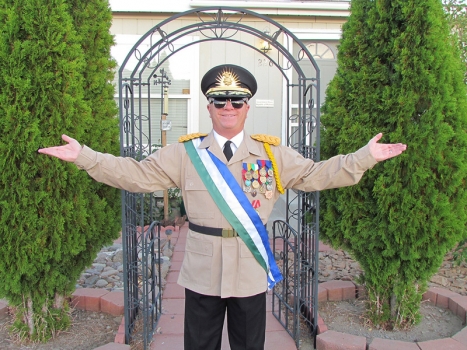 His Excellency President Kevin Baugh greets Molossia tourists, and stamps their passports. There were 48 visitors in 2015, one of whom was actor Jack Black.

Yes, there is such a place. No, they don’t have Molossers. At least, not yet.
By
Denise Flaim Welcome to the micronation of Molossia.

If you know your canine history, you know the term “Molosser” derives from the ancient Greek people called the Molossians.

Whether or not our Molossers of today actually harken back to their classical-age namesakes is the makings of another article. (And you can read it here.) But turns out that you needn’t time-travel back to the era of Socrates and Sophocles to visit some Molossians. You just have to get a flight to Reno.

Billing itself as the “world’s smallest sovereign nation,” the 21st-Century Republic of Molossia is located at 226 Mary Lane Road in Dayton, Nevada. Not coincidentally, that 1.3-acre lot in the Sierra Nevada foothills is also the home of Kevin Baugh, who prefers to be addressed as His Excellency.

Baugh came up with Molossia as a childhood project in 1977, and in 2012 he petitioned the White House for it to become an official micronation, along the lines of Liechtenstein and San Marino. President Obama never responded. Now that we’ve dispensed with the geopolitics, and, tongue still planted firmly in cheek, let’s get to the dogs. The Molossian hound, a 2nd-century Roman copy after a Hellenistic bronze original. Photo: Marie-Lan Nguyen
“Indeed, dogs have always been a part of Molossia,” says Baugh, 53, whose kingdom includes several small outbuildings that house Molossia’s customs station, general store, post office and bank. (The Molossian currency, the Valora, is tied to the current value of Pillsbury cookie dough.). Baugh says his Molossia stopped aligning itself with the ancient kingdom of the same name after Greek journalists objected that he was playing fast and loose with their national heritage. “But that doesn’t change our love of dogs,” he hastens to add. Indeed, Molossia is home to five canines, though none of them is a Molosser, as Baugh admits a preference for somewhat smaller dogs.
“Thus, here in Molossia, we have one oversized West Highland White Terrier (Duncan), one partially blind Boston Terrier (Annie), one very noisy Pomeranian (Bella), one too-clever-for-his-own-good Dachshund (Tom) and one possible Shih Tzu mix with an odd fang (Molly),” he explains. “They are not just our dogs, but also our friends and of course citizens of Molossia.”
Molossia attracts a couple of dozen tourists a year, who take Baugh’s hour-long tour and sometimes purchase souvenirs, including homemade soaps and signed photographs of the Baugh family.
We can only imagine what a good-size Neapolitan Mastiff lounging in the backyard would do for Molossia’s gross domestic product. And Baugh says he is open to the idea.
“We would love to welcome a contingent of Molossers to Molossia,” he says. “They are big, sweet dogs, in spite of farting and drooling. We have no particular concerns with that behavior – we have teenage boys.”
For more information about Molossia, visit www.molossia.org.
© Modern Molosser Magazine. This article may not be reposted, reprinted, rewritten, excerpted or otherwise duplicated in any medium without the express written permission of the publisher.
Thu, 06/09/2016 - 10:53am