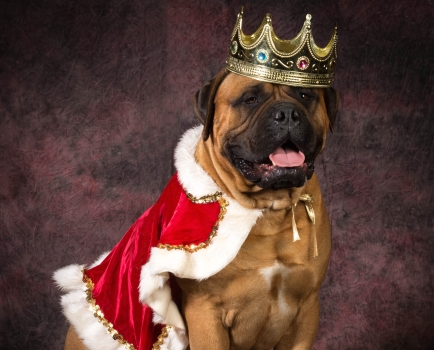 All the Right Stuff

American Best in Show Bullmastiffs at a Glance
By
Helene Nietsch
The American Kennel Club recognized the Bullmastiff in 1933. But it took more than 40 years before the breed garnered its first Best in Show. And over the ensuing 36 years, there have only been 51 more Best in Show Bullmastiffs – a comparatively low number compared to other Working breeds such as the Doberman Pinscher and Boxer.
What makes the Bullmastiff a less popular choice in the Best in Show ring? Not a “sexy” breed, the Bullmastiff might be less understood and not as flashy as the other dogs in the final lineup. Many lack the showy attitude of the other Working breeds, and because they’re not from a prominent breed, their correct type might be less commonly understood, which in turn can shake a judge’s confidence in awarding the prestigious honor. Many Best in Show Bullmastiffs have been owner-handled, and campaigned and advertised more sparsely, which also contributes to them being unjustly overlooked.
Although Bullmastiff “type” has evolved over the last 40 years, to a dog with more bone and substance and a blockier head and muzzle, breeders and judges alike still should favor the sound, nearly square dog with moderate angles, square head and muzzle, and confident attitude.
Does this mean that a Bullmastiff needs to have the “look of eagles” to win the coveted award?  Perhaps all the Bullmastiffs listed here had a special “sparkle,” but all were well-deserving winners.  They all have contributed to the success of subsequent Best in Show winners. With the quality of the breed getting better each year, I think we will see more and more well-deserving, typey Bullmastiffs winning top honors.
The following dogs all had a remarkable relationship with their owners and handlers, and had incredible ring presence. Although they are somewhat different in style, each possessed what it takes to become a Best in Show Bullmastiff ... a task not easily accomplished. 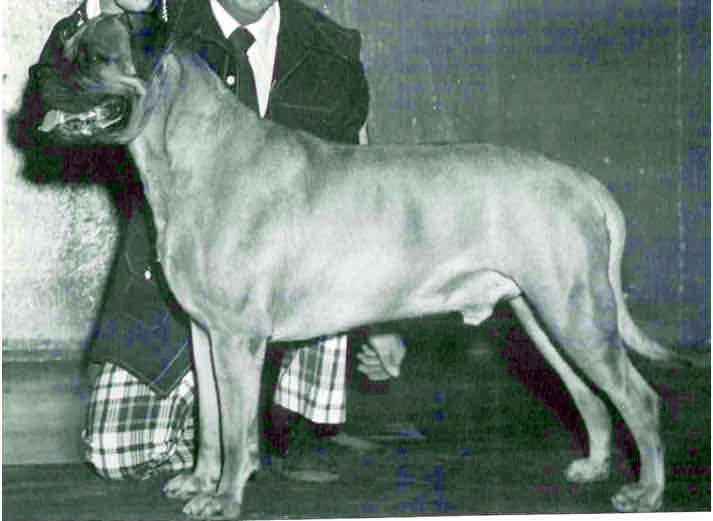 The breed’s very first Best in Show dog won that honor on April 27, 1974. “Sonny” was top Bullmastiff all systems in 1973 and 1974, owned by Liz and Earl Dunn and handled by Earl. For many years, Earl and Liz’s passion was campaigning their Bullmastiffs. Although not breeders, Liz and Earl were prominent “dog people” in the Midwest. Earl was president of the American Bullmastiff Association and the Muncie Kennel Club, and was senior band director at Ball State University. 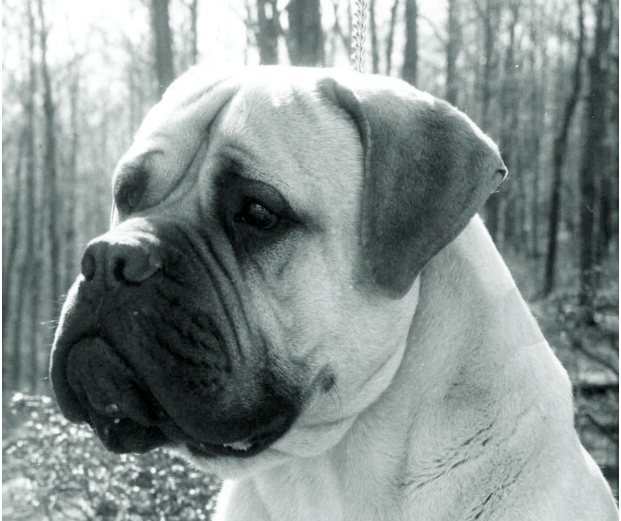 Bred by Louise Sanders and Helene Nietsch, “Freddie” was AKC’s first multiple Best in Show Bullmastiff. Owned by Wayne and Jean Boyd of the famed Rivergrove Great Pyrenees kennels, Freddie competed in the yet-to-be-split Working Group. His headpiece would please any breeder, even today, with his lovely dark eye and expression, perfect head pigment and strong muzzle. He was a sound dog, exhibiting the bone, size and substance breeders started to appreciate in the 1970s. Freddie was raised by a Collie bitch, as his dam, Ch. Bandog’s Hard Hearted Hannah, a Specialty and National WB/BOS winner, died of bloat right after delivering her puppies. 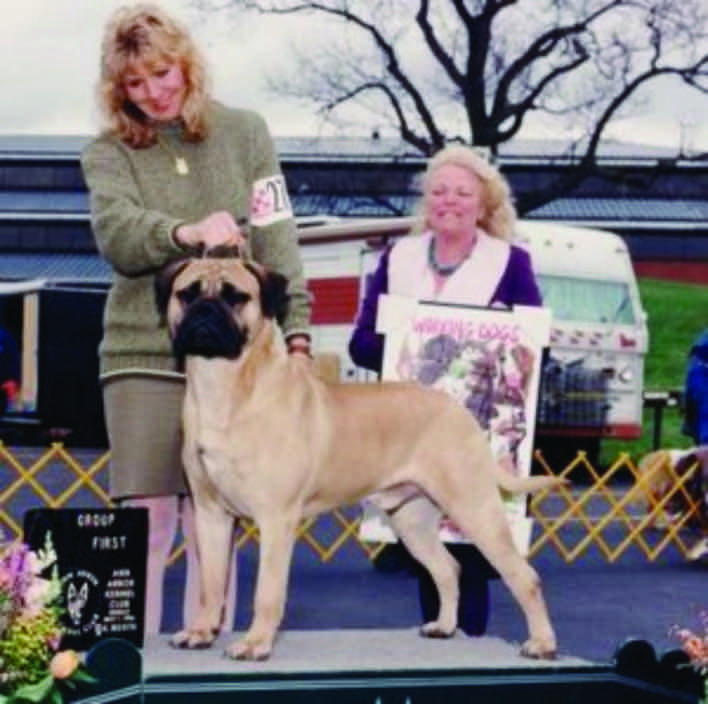 Ch Leatherneck Bit of Happylegs, bred by Jean Robinson, and owned by Chris Lezotte and Alan Kalter, was another strong influence on the Bullmastiff breed. A beautiful clear fawn, short-backed dog, “Bit” had type that was elegant but powerful, masculine yet stylish, and was beautifully presented by Norma Smith. Bit was Happylegs’ stud puppy out of the most successful breedings of Ch. Happylegs Luke of Hartford and Ch. Cheers Better Up the Ante (attaining the first Gold ROM status for a bitch). There were 12 champions as a result of these two breedings. Bit passed on his boundless energy and joyful spirit, as well as a tendency to pick up and carry stuffed toys – referred to in Bullmastiff circles as the “Bit Gene,” since it has passed down through many generations. 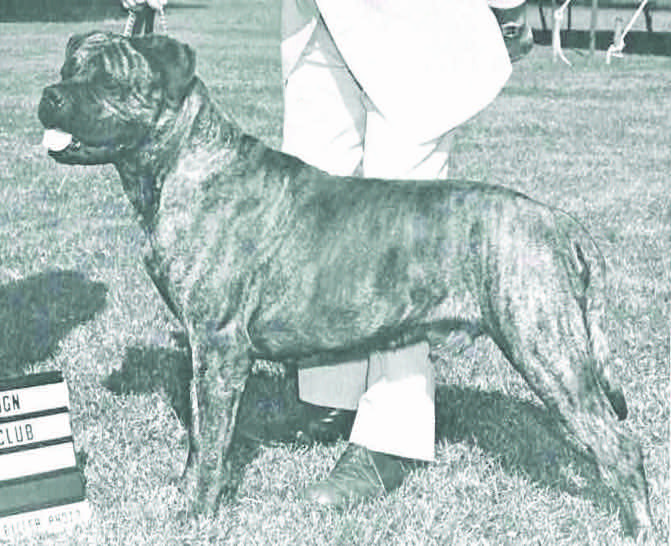 Trojan’s Dusty Warrior, AKC’s first and only brindle Best in Show Bullmastiff (in 1980), was also campaigned by Earl. Both he and Sonny are reminiscent of the early style: a more moderate dog, sound and good moving, but with less bone, substance and head type, typical of the day. 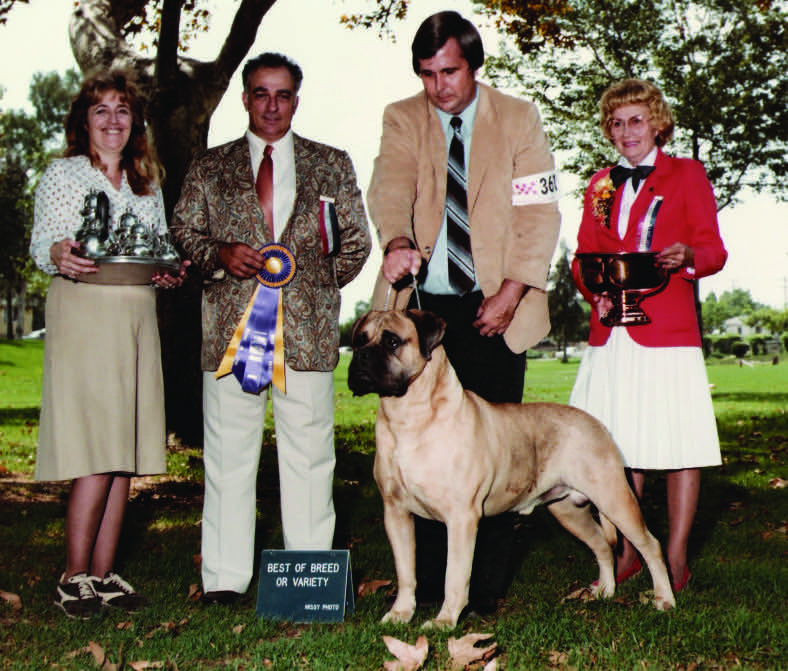 In the early through mid-1980s, Wayne and Jean campaigned Ch. Bandog’s Crawdaddy Gumbo, bred by Helene Nietsch, Louise Sanders, and Ralph and Erin Stroup. “Waldo” became the top-winning Bullmastiff in the history of the breed, with 37 all-breed Best in Show wins and 11 Specialty wins, including three National Specialty wins, the last as a veteran. Waldo was also the number-two dog all breeds (Kennel Review 1984-1985) and attained Gold ROM status.
Waldo’s confidence, attitude, soundness and movement surely contributed to his success in the Best in Show ring. “Everything in the Bullmastiff standard assures us of a dog that will stand its ground and protect at all costs,” wrote Richard Beauchamp in his book, “Solving the Mysteries of Breed Type.” “Stalwart but effectively mobile, the antithesis of what we look for in the lightning-rod sighthounds, Ch. Bandog’s Crawdaddy Gumbo’s stance and attitude tell us exactly what we need to know about the Bullmastiff in this respect.” Owner-handled to all his wins, Waldo remains yet to be seriously challenged in the history books. 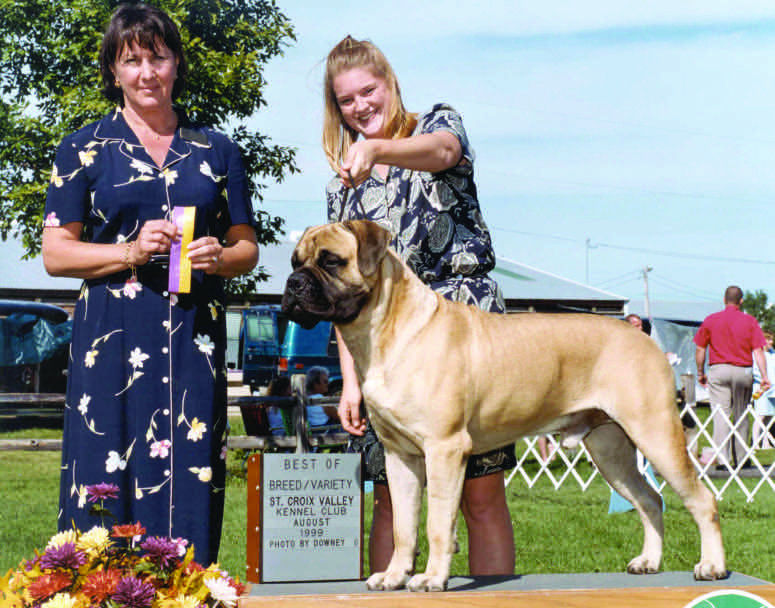 Another special relationship blossomed between Kara Anderson Gonzalez and “Angus,” bred by Gary Anderson and Kara and Sergio Gonzalez. Young Kara, only in her 20s, swept the scene with the only back-to-back Best in Show Bullmastiff in 2003. A family man, Angus loved Kara and Sergio’s very young children and was campaigned to the number-one Bullmastiff spot. Angus garnered eight Specialty wins and five Bests in Show, all breeder-owner handled, becoming the all-time winning breeder-owner-handled Bullmastiff with Gold ROM status. With his level topline and strong rear, gorgeous bite and clear-fawn coat, Angus pleased both the all-rounder and breeder judge. 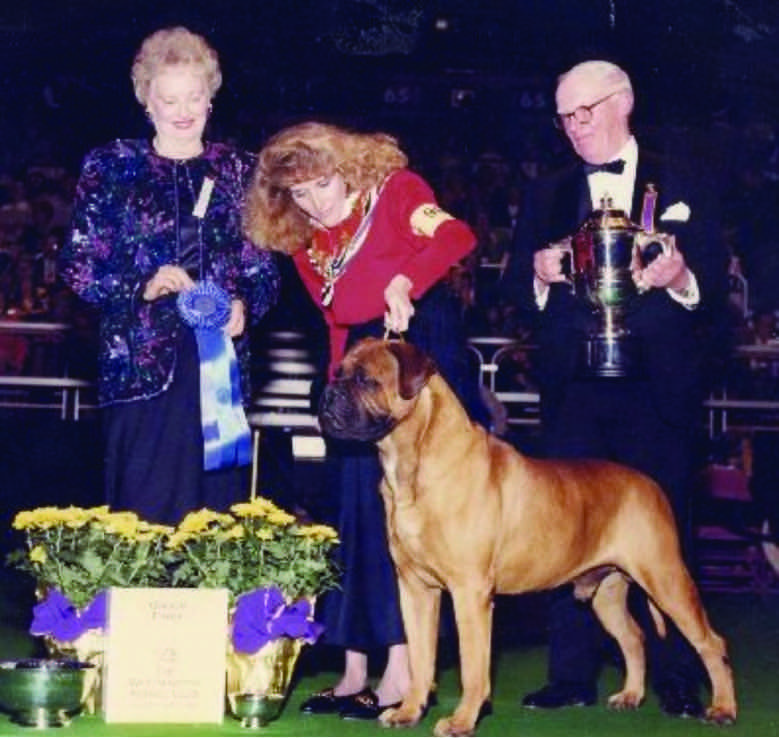 Not since Waldo had there been a Bullmastiff to do the winning that “Satchmo” did. He was the number-one Bullmastiff in the country 1990-1992, the number-three Working Dog in 1991, and in 1992 he became the first and only Bullmastiff to win the Working Group at the Westminster Kennel Club show. He won the National Specialty in 1991, an Award of Merit in 1990 and again as a veteran in 1995. Satchmo had 25 all-breed Bests in Show, 84 Group 1s and 105 other Group placements to his credit. Sired by Ch. Tailwynde’s Double Dutch out of Fisher’s All that Jazz, he was bred by Russell C. Swank III, owned by Bill Underwood and Janet Morris, and handled by Sherry Hurst. Thanks to frozen semen, he recently sired a litter. 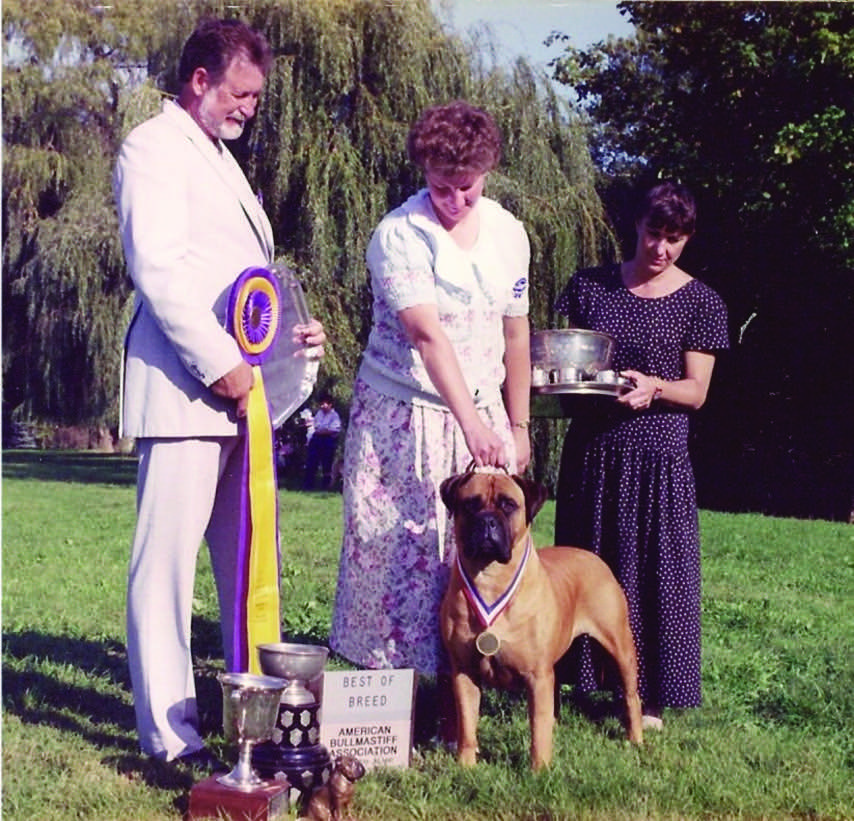 Another owner-handled Bullmastiff, “Caitlin” was bred by Ladybug Kennels and owned and shown by Denise Borton. This good-sized, lovely red bitch became the top-winning bitch in the history of the breed, with seven Bests in Show and two National Specialty wins. The relationship between Denise and Caitlin would not soon be forgotten if seen in the Breed, Group or Best in Show ring – this team gave you goosebumps. Along with Waldo, Caitlin gave the Bullmastiff, unequalled by any other, deserved recognition in the Best in Show ring. 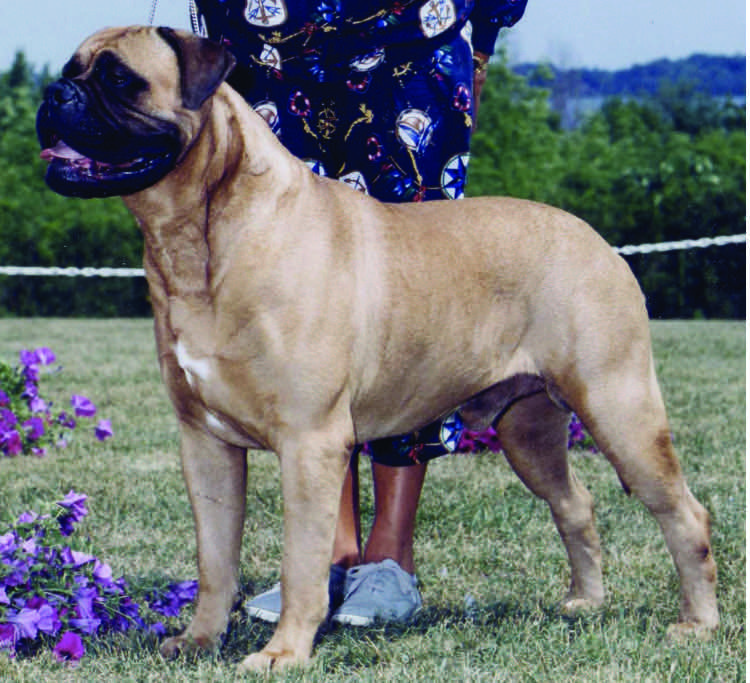 One of many of the Bastion Best in Show dogs, “Magnum” was Bob and Lynn Spohr’s introduction into the competitive Best in Show ring. An American as well as multiple Canadian Best in Show dog, Magnum exhibited the size, legs, substance, bone, bite and type of a really good Bullmastiff, always demonstrating his gentlemanly quality. His handler in Canada, Pam McClintock, felt that Magnum was an honest, strong and true dog, neither excessive nor lacking in any of the important qualities that make a truly special Bullmastiff. “As Magnum’s owners and breeders, he brought as much pride and joy to us with his sweet and loving temperament, as with his fluid movement and exceptional conformation,” Lynn Spohr says. “He taught us a great deal about the world of top show dogs and about the impact that a dog can have on the breed.” 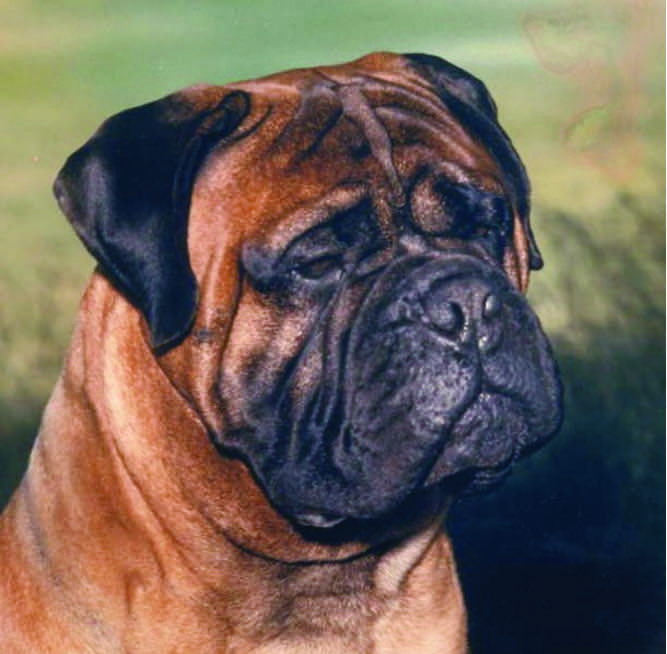 In the late 1980s, “Brahmin” was a major type influence in the U.S. as well as internationally. When he came on the scene as Winners Dog and Best in Sweepstakes at the 1986 National Specialty at the age of 10 1/2 months, he was destined to influence the breed. Himself a multiple Best in Show winner, Brahmin sired five Best in Show winners (including one in Austria). A typey, dark-red dog, he was bred by Robert Skrabalak, Virginia Rowland and Mary Barbara Walsh and co-owned by Virginia Rowland, Mary Barbara Walsh and Dolores Merlino. Brahmin significantly evolved the breed’s type into what it is today as one of its top-producing sires, achieving Gold Registry of Merit status. His beautiful head, still classic today, as well as his size and substance, were major draws to him as a stud dog. 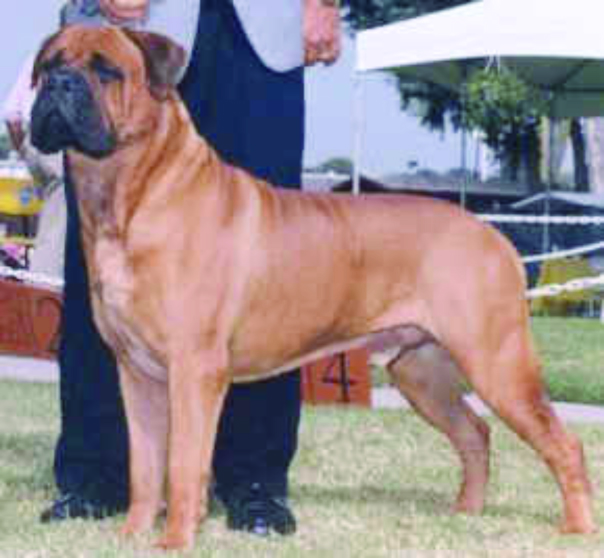 “Teddy,” bred and owned by Carol Beans, was a two-time National Specialty winner, multiple regional Specialty winner and six-time all-breed Best in Show winner. Teddy was shown by Ron Mattson, who formed such an incredible bond in his campaign that Teddy remains with his handler to this day, at age 11 ½. Carol recalls Teddy’s inner spark and fire in the show ring, with an extraordinary side gait and lovely silhouette.