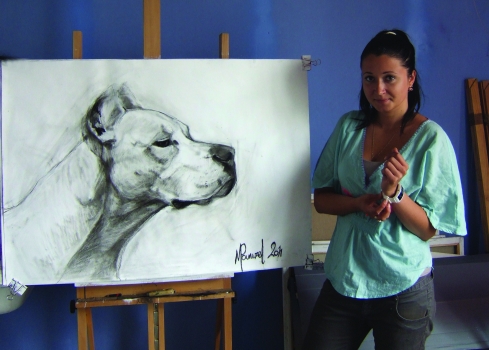 Monika Paruzel is utterly, unabashedly, exuberantly in love with the Dogo Argentino.

A graduate of the Academy of Fine Arts in Lodz, Poland, 25-year-old Paruzel paints this striking white breed almost exclusively, and has garnered an enthusiastic following, with waits of up to four months for her paintings.

“My parents are animal lovers, and for as long as I can remember, there have been dogs in my life,” says Paruzel, adding that her large-breed-loving father had a Dalmatian, Caucasian Shepherd, Tosa Inu and, most recently, a Newfoundland as the family dog.

During college, Paruzel studied the art of drawing the human form, and dabbled in painting still lives from nature. But they all left her uninspired.

Then, two years ago, she saw her first Dogo. It was a photo of a seated male, looking on with equal parts majesty and indifference, perhaps also a touch of sadness. Paruzel immediately fell in love.

“I see Dogo Argentinos as beautiful, smart, strong dogs ... majestic. They have very wise eyes,” she says. “Maybe they look serious, but I think that their beauty is subtle and graceful. I call them ‘beautiful beasts.’”

After drawing that first Dogo, Paruzel knew she needed to paint what made her heart sing, and that was dogs. Her next project was a collection of paintings of her favorite breeds, drawn from photos she found on Facebook. The common denominator: All the dogs were white, or white with black patches. One of the artist’s favorite drawings: Kalec Bravura del Ayar, the top Dogo Argentino in Brazil in 2011.

Paruzel began to share her pictures on Facebook, and the reaction was instantaneous. “People liked my drawings, some even fell in love with them, and many of them wanted to have me paint their dogs,” she says. Dogo Argentino fanciers, in particular, began to actively commission portraits, which take Paruzel about a week to complete.

Paruzel draws with dry pastels or charcoal on thick paper, which she modifies slightly using a process she coyly calls her “secret.” When she paints, she uses acrylic on canvas. Whatever the medium, she prefers a large format. “It gives me the possibility of a larger expression,” she says, explaining that honing in on a large head such as the Dogo’s emphasizes its “sensuality.” “Puppies in my drawer” is how Paruzel labels this study of young Dogos.

Those outside the breed may not see a great deal of difference between one white dog and the next, but to Paruzel each is a vibrantly different individual. “Every dog has some very distinctive features, such as a patch, and a rich facial expression. The shape of the eyes, nose, ears, skull – they are little differences, but they make a dog unique.” When she does a portrait, Paruzel focuses in particular on the eyes. “I have a friend in America who writes poems about dogs who says, ‘The dog need not speak. His eyes say all.’” The hardest part is capturing the right outline and proportions, then doing the highlights and shadows: Once these hurdles are overcome, giving “life” to her subjects is, she says, “pure pleasure.” Dogos aren't the only breed Paruzel paints, of course. Here is a Tosa Inu.

“Drawing dogs began for me from loving them, and dreaming about having one close to me – and then it became my job,” she continues. Though she specializes in this one breed, it never grows old for her: Each country has its own version of the Dogo Argentino, and she finds beauty and inspiration in all of them.

Over the past two years, Paruzel’s small studio has seen dozens of canvas Dogos depart, bound for happy homes where fanciers will treasure and admire them for years to come. But her own dream has yet to be realized: Owning and living with one of the beautiful white dogs herself.

Until a year ago, Paruzel lived with her parents, who already had a Newfoundland, so there was no room for a second dog. Recently, she moved to her own apartment – and that much closer to a Dogo of her own.

Now, in addition to saving up for a puppy, and choosing a litter to acquire one from, Paruzel  needs to get her driver’s license. “I want to take my dog with me everywhere,” she says, “so he or she does not have to wait for me at home alone and wonder when I will return!”
Until she has her very own Dogo to caress and care for, the feel of the creamy white paper beneath her pastel stick will have to suffice.
Visit Monika Paruzel’s artwork at www.facebook.com/Monika.Paruzel.Art.
© Modern Molosser Magazine. This article may not be reposted, reprinted, rewritten, excerpted or otherwise duplicated in any medium without the express written permission of the publisher.
Thu, 11/19/2015 - 1:12am