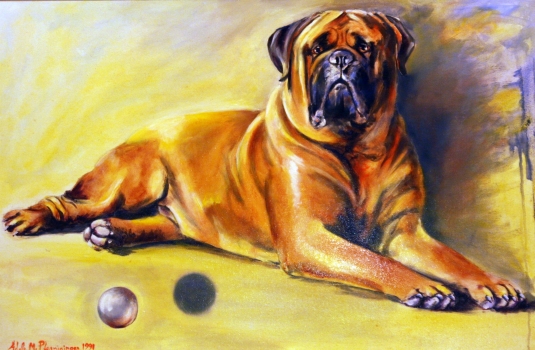 Eye of the Beholder

After three decades of breeding, Adele Pfenniger brings her beloved Bullies to life on canvas
By
Denise Flaim 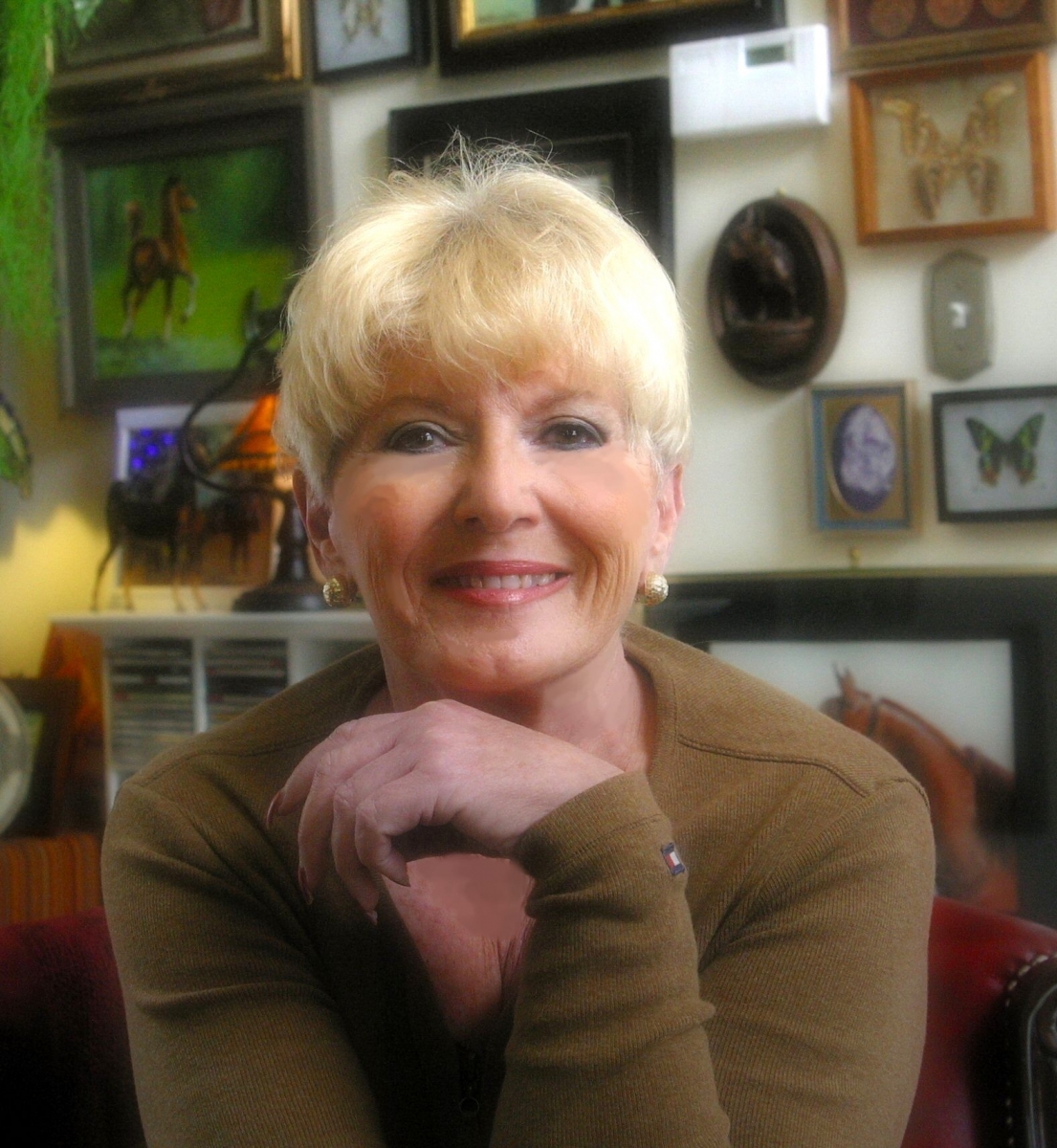 In the hands of the most skilled dog men and women, breeding is nothing less than painting with genetics. The great breeder is a deft artist, combining deep technical skill with an “eye” – hard to define, easy to recognize.
Adele Pfenninger of the well-known Tailwynde kennel spent 32 years developing her tightly linebred strain of Bullmastiffs.
“I looked at breeding dogs as an art, and that satisfied my artistic outlet for most of my life,” she says. “But when I dispersed my kennel in 1996 and began a new life, I suddenly found myself without a way to express my creative, artistic side.”
Today, living in a townhouse in Annandale, N.J., with no dogs of her own, Adele continues to bring the breed to life – in two dimensions. Though horse paintings occupy much of her time these days, her depictions of the breed she knows so well are sought after by Bullmastiff fanciers the world over. 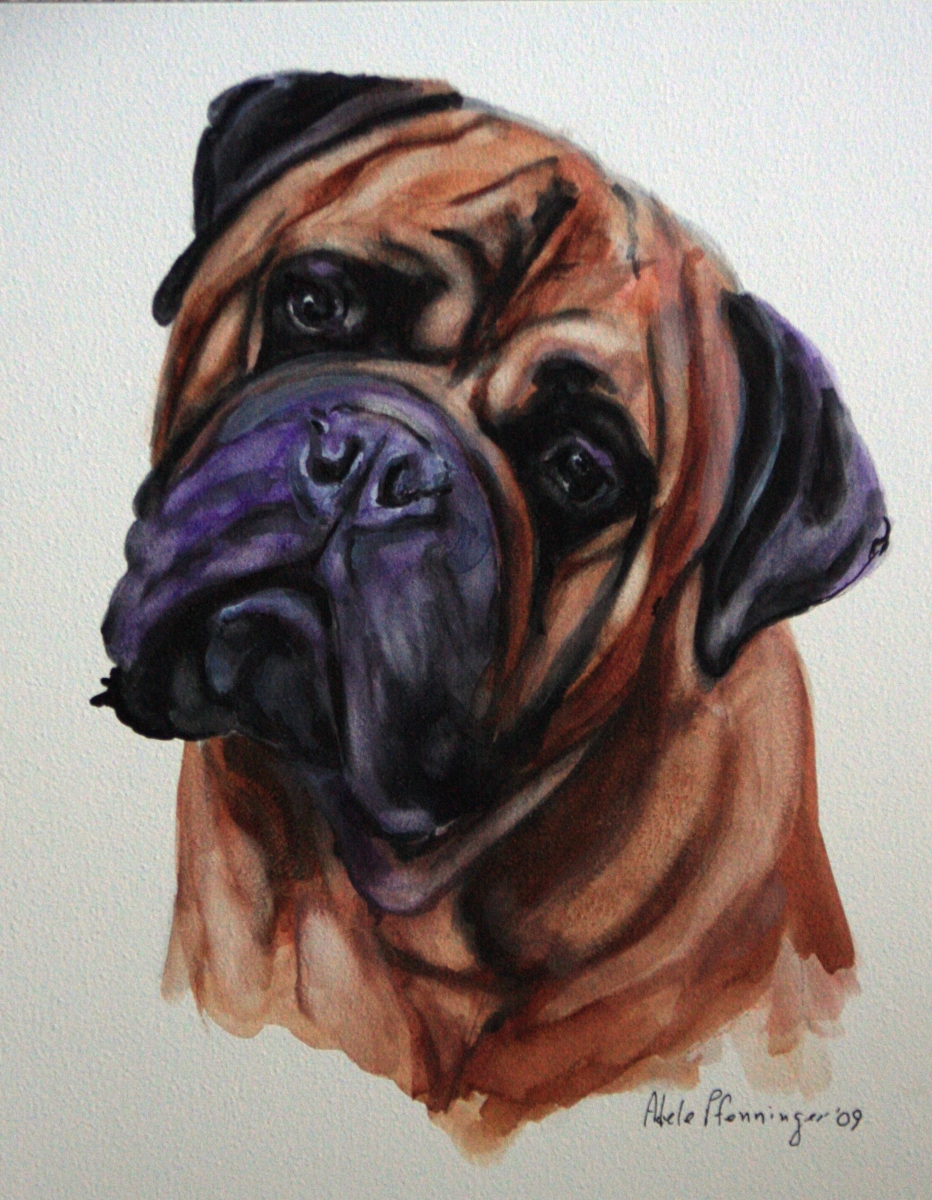 Adele’s re-imagining as an artist wasn’t a given. While she had drawn and painted dogs, horses and cows sporadically throughout her life, she focused much of her energy on raising a family and, later on, helping her husband run an active farm where they bred registered polled Herefords – and, eventually, kept a kennel of up to two dozen Bullmastiffs.
Adele acquired her first Bullmastiff in 1964, after a burglary attempt during which her Brittany Spaniel looked on in disinterest. Purchased at the too-young age of six weeks, the Bullie bitch lunged at Adele’s 6-year-old son one day without provocation, and Adele retreated to Saint Bernards. She co-owned Saints with Marlene Anderson of Beau Cheval, where she learned most everything she knows about creating a true strain of dogs. “Then,” she says, “I went back to Bullmastiffs and started all over again.”
Her most profound lesson was that in order to get and maintain type – that essence of “Bullmastiffness” that permeates her paintings, which she does in both watercolors and oils – she needed to linebreed. Heavily.
“I was a maverick in the breed because I inbred the whole time I bred them, and I never got three-headed puppies,” she says. “By the time I quit, a lot of my dogs had COIs [coefficients of inbreeding] of 64 percent. I took a lot of flak for it. But the breed has to look like the breed is supposed to be, and the only way you can do that is with heavy linebreeding. You could breed my sires to a doorknob and they would reproduce themselves.”
Adele linebred on two dogs: Ch. Tailwynde’s J-Paul Get Em, a “magnificent animal,” she remembers, “but not perfect because none of them are”; and Ch. Tailwynde’s Double Dutch, who himself was linebred on “J-Paul.” Both produced multiple National Specialty and Group winners, and “Dutch” sired Ch. Mr. U’s Music Man, the only Bullmastiff to win the Working Group at Westminster.
“All that’s faded in the past,” Adele says of the ribbons and the wins. “I just have fond memories of them now.” 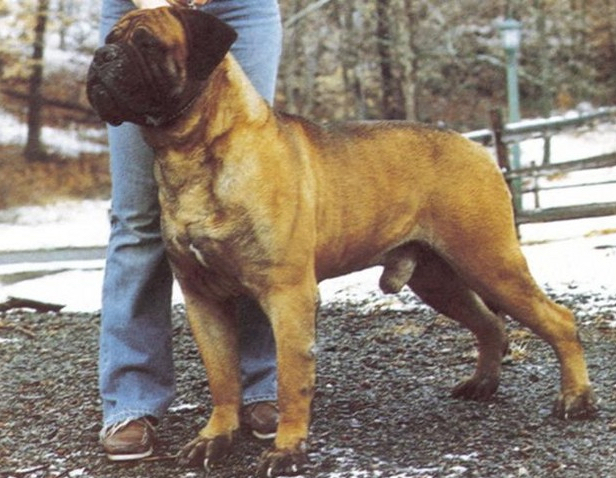 Ch. Tailwynde’s J-Paul Get ’Em, ROM (“J-Paul”), sire of two BIS and BISS sons. He is the dog Adele chose to linebreed on in her breeding program. 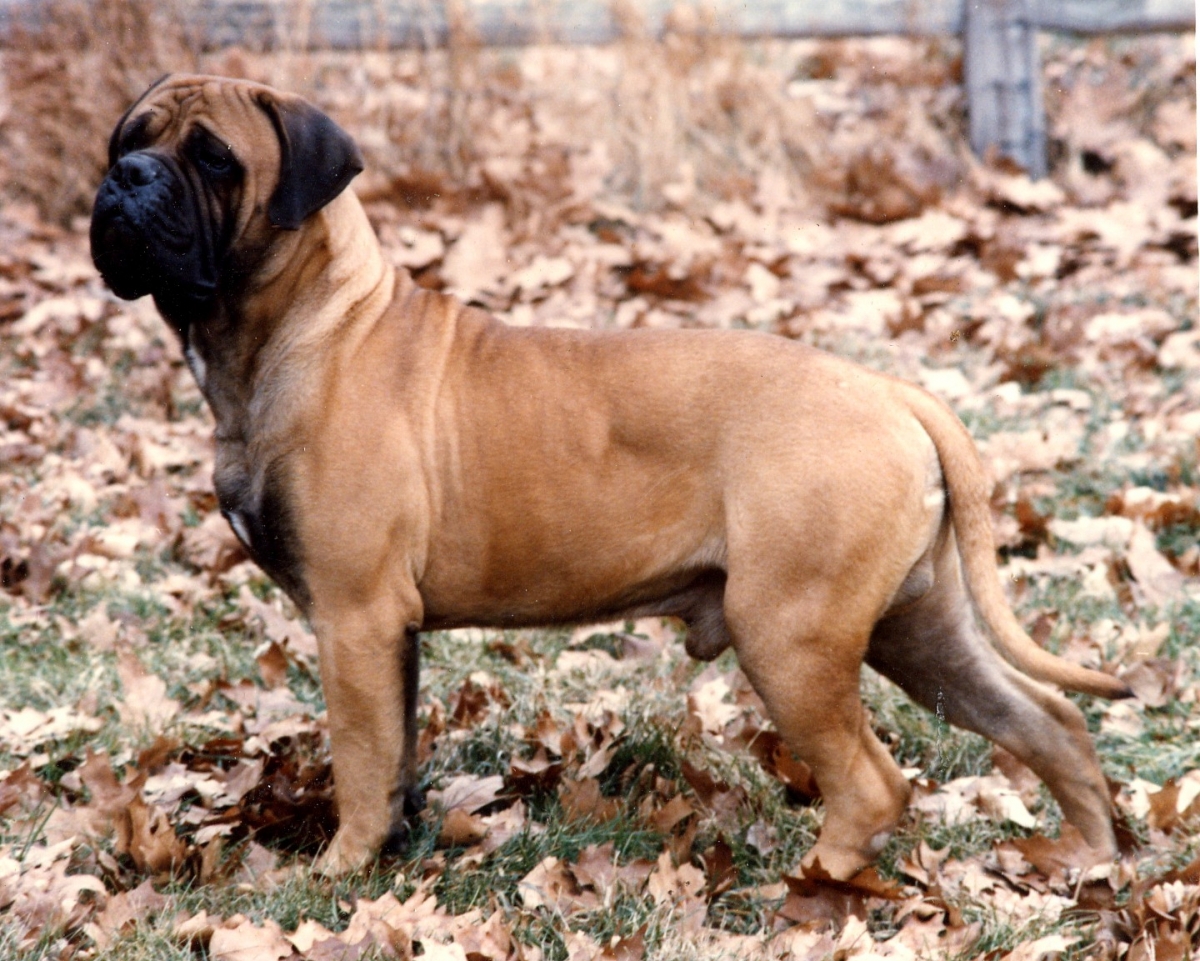 Ch. Tailwynde’s Double Dutch, ROM (“Dutch”), sire of the only Bullmastiff to win the Working Group at the Garden. 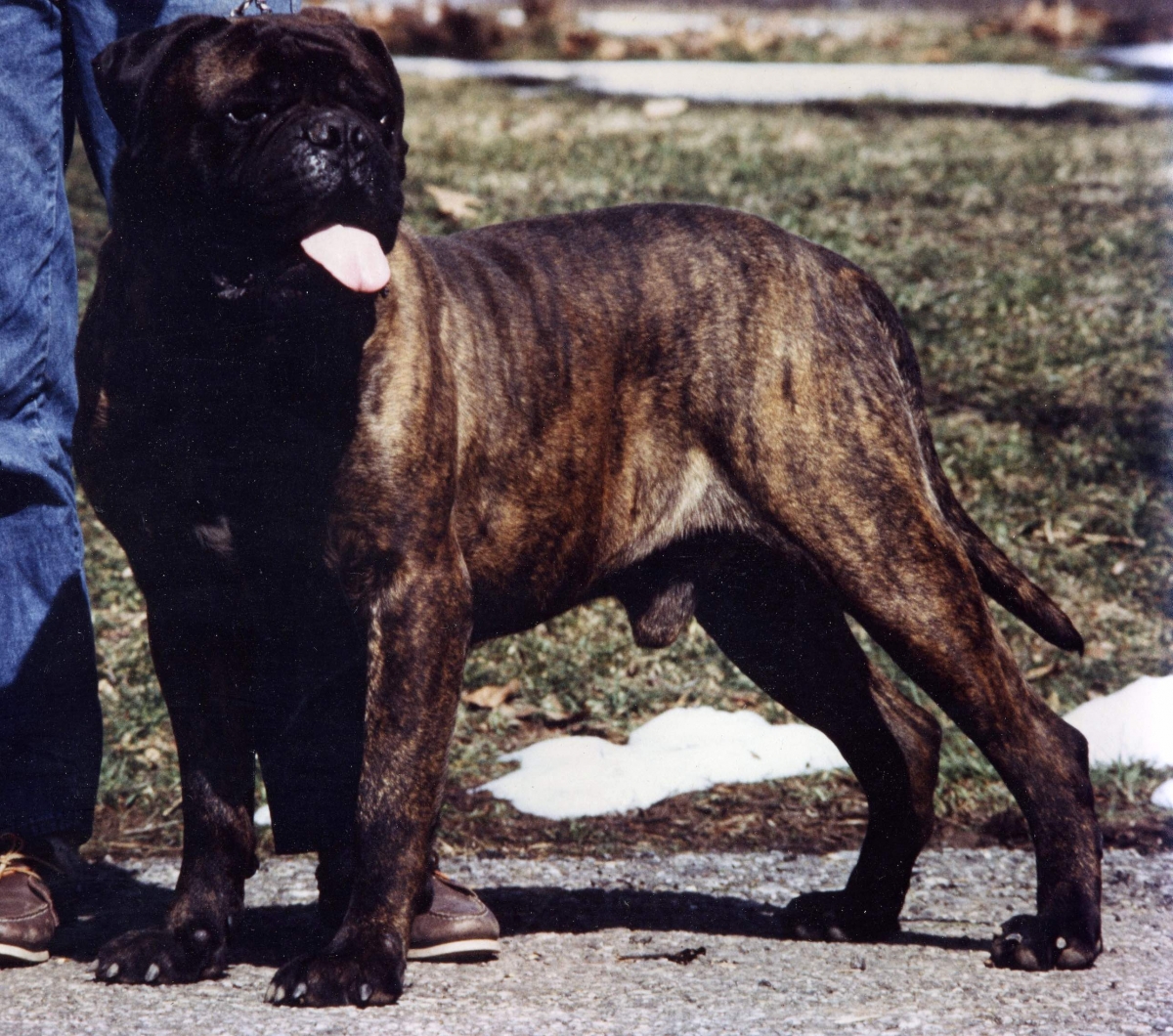 And perhaps a little more than that. When Adele began painting in 2002, several years after divorce forced her to disband her kennel, she began with the dogs she knew best – her own.
“Many artists worry that those who view our art won’t like it, but that is an unfounded fear,” she explains, adding that while exhibitions and sales are gratifying, they are not her main impetus. “The true reward is in seeing my old friends on my canvases and remembering with each brushstroke how much my dogs and other animals added to my life.”
Adele admits that she does not usually do commissions. “People send me pictures of ugly dogs, and I can’t paint them,” she says with the brutal honesty of a type-obsessed breeder. “I like to paint what I want to paint, you know? I don’t want to paint ugly horses, either.”
One of the first dogs Adele painted was “Fogarty” (Tailwynde’s Nine One One), who she describes simply as “the best dog I ever bred.” He was the only dog from her kennel that she kept. Tragically, two days before she moved into her townhouse, he died. She has not had a Bullmastiff since.
The reason isn’t grief, she explains: It’s that the eye of a seasoned breeder accepts nothing less than quality, and, oftentimes, nothing less than their own.
“I don’t think I could get one that I could look at and love like I could love one of my own,” she says, musing that if she could get hold of some of the frozen semen on Dutch or Fogarty that she gave away, maybe she could squeeze a whelping box into her townhouse.
In the meantime, she still keeps in touch with the Bullmastiff community. And she is amused at being “rediscovered” by all the newbies in the breed who know her for her paintings, not her breeding stock.
“Life is a continuum,” she concludes. “I continue mine through my art now, thankfully not having to forget my past.”
© Modern Molosser Magazine. This article may not be reposted, reprinted, rewritten, excerpted or otherwise duplicated in any medium without the express written permission of the publisher.
Thu, 07/05/2018 - 2:33pm