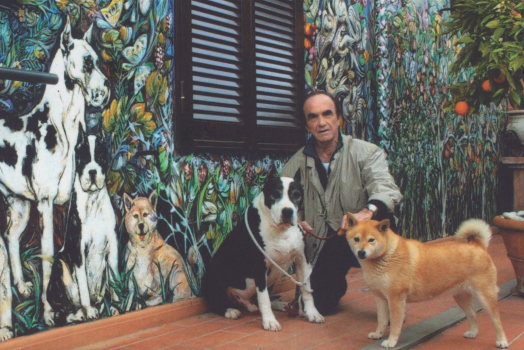 Pier Giovanni Staderini unleashes the essence of the Molosser ... one brushstroke at a time
By
Denise Flaim

Those who love the Mastino Napoletano would doubtless agree it is a breed for connoisseurs. Like anything that promises knee-knocking success – a fine wine, an ambitious soufflé, a much-anticipated tryst – it also carries the risk of spectacular failure. Confidence and experience are required to recognize, let alone achieve, the potential for greatness, even transcendence, that the breed offers.

It is no surprise, then, that some of the most sophisticated judges and fanciers of the Neapolitan Mastiff own artwork by Pier Giovanni Staderini, a Tuscan painter and ceramicist who is known for his lush, even sensual depictions of Molossers, and in particular, Mastini. On his canvases and in his clay forms, the strength, nobility and timelessness of the breed are captured and codified in a vibrant symphony of color and curves. Staderini’s brushstroked dogs, and above all his Molossers, represent a trip back in time. A painting of a group of Tosa Inus, Japan’s answer to the mastiff (above), and one of the real-life dogs who inspired it (below). Staderini knew his calling early in life. At five years old, he was painting landscapes of his native Tuscany, inspired and guided by his father, himself a noted artist. Studying at the Art Institute of Florence as well as at that city’s Academy of Fine Arts under the tutelage of Trieste-born painter Giorgio Settala, Staderini continued painting, as well as studying sculpture and ceramics. In his 20s, looking to expand his horizons, he left for Rome, where he became a scenery designer at the famed Cinecittà studios, even appearing in “Queen of the Nile” (1961) and “Red Roses for the Führer” (1968).

Staderini’s travels took him all over Europe, from Hungary to Greece, as well as Latin America and the Middle East. His style is equally as far ranging, from abstract works to curvaceous studies of the female form that are as brooding as they are sensuous.

It is no coincidence, perhaps, that Staderini’s own breed is the Great Dane – what he calls the “dog of dogs” and arguably the most elegant and sinuous of the Molossers. Though he no longer breeds under his kennel suffix of Delle Due Draghe, he has owned some 20 champions in his lifetime. And for more than three decades, he has judged all the breeds in FCI’s Group 2, which includes, of course, Molossers. The Great Dane, Staderini’s own breed.

“On various occasions, I have painted many breeds,” he says. “However, those that I prefer, and those that are the most picturesque, are above all the Molossers.” Of those, it is clear that the Neapolitan Mastiff occupies a special place in his heart – and on his easel. Among those who own Staderini’s work is the well-known architect and judge Giuseppe Alessandra of Treviso, Italy. “In every piece, the archaism of this breed was evident, surviving for millennia through terrible hardships and often life-threatening labor,” Alessandra wrote about a Mastino-themed exhibition of Staderini’s work in 2008. Staderini’s brushstroked dogs, above all his Molossers, represent a trip back in time, Alessandra continued, with the ancient types he depicts imbued with great meaning and expression.

Prolific and ever evolving, Staderini lives and works in his “painted” house in the hills of Montelupo Fiorentino, just southwest of Florence, which has been known for centuries for its Tuscan ceramics and majolica. The walls are covered in murals of some of his favorite breeds, along with the words “My house is open to the sun, to friends of dogs, and to joy.”

As ingredients go, it is a recipe for a life well lived, and full of limitless inspiration. This 2011 painting was a commission from a Dogo Argentino owner. The rooster and hen symbolize the husband and wife, and the chicks their five children. Detail of a painting executed for a show in Baveno, on Lake Maggiore, in June 2011. While an array of breeds are depicted, Staderini could not resist including two of his favorites: a Neo and Great Dane. This painting combines two of Staderini’s favorite subjects: a female study and a dog – in this case, a Bulldog.
© Modern Molosser Magazine. This article may not be reposted, reprinted, rewritten, excerpted or otherwise duplicated in any medium without the express written permission of the publisher.
Tue, 09/08/2015 - 12:08am