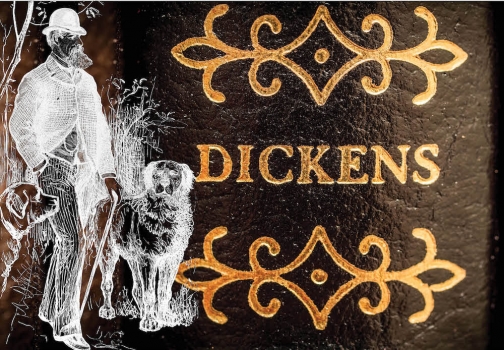 Never mind cranky Ebeneezer Scrooge, navigating his trio of ghosts in A Christmas Carol. Forget about that eponymous happily-ever-after orphan in Oliver Twist. And leave Miss Havisham in her mildewed wedding dress in Great Expectations.

No, the cast of characters we want to focus on in this story are the many real-life dogs owned by Charles Dickens, the famous author of those 19th-Century novels. 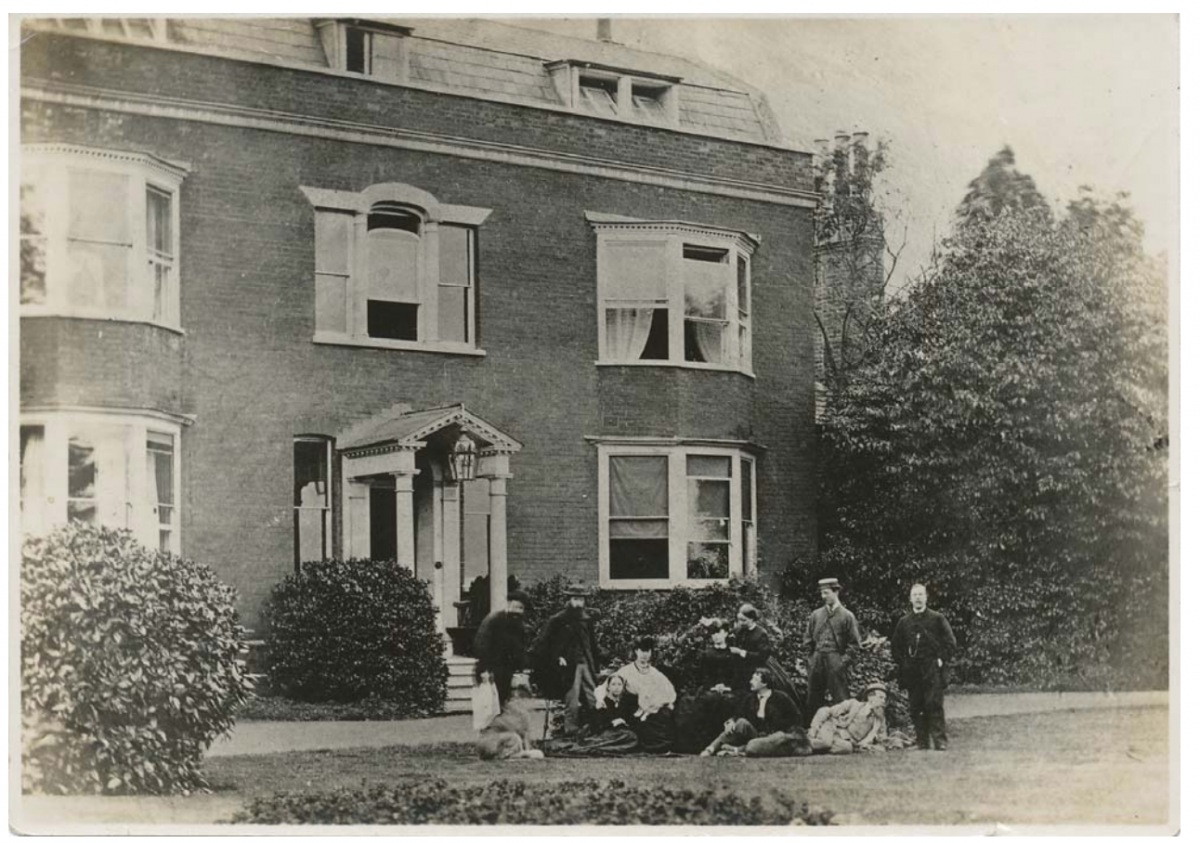 The Dickens family in front of their country home, Gad's Hill, with one of the famous author's many large dogs, presumably his favorite, Turk.

Dickens owned a number of animals, from cats to ravens, but dogs were likely, in the opinion of his daughter Mamie, “his strongest love.” Decades after Dickens’ death, his biographer called his love of dogs “inexhaustible.” Over the years, the Dickens menagerie included spaniels and Pomeranians. But his favorites were, not surprisingly, the big’uns – “a noble and an ignoble army of them, first and last,” according to famous author and Collie breeder Albert Payson Terhune. Dickens himself delighted in how imposing the dogs were on their many walks, calling them “the terror of the neighbourhood.” 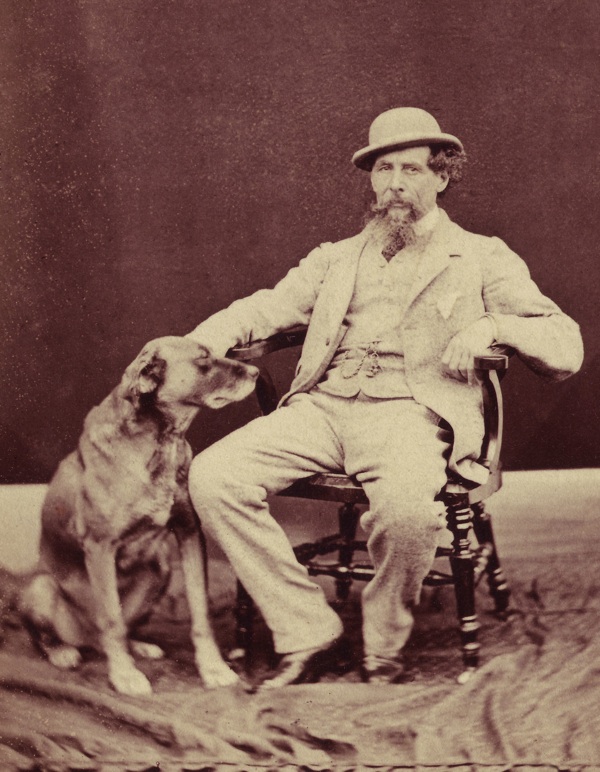 Arguably the most beloved of all these dogs was Turk, described by Dickens’ oldest daughter Mamie as “a beautiful mastiff,” though a widely circulated photo of him, squinting in pleasure from Dickens’ caress, doesn’t display much Molosser mojo. Indeed, with his narrow muzzle and average-sized body, Turk looks more like a Shepherd mix.

In an 1865 letter, Dickens recalled going on a walk with Turk and Linda, a Saint Bernard given to him by the mountaineer and writer Albert Smith. Suddenly falling lame because of a frostbitten foot, Dickens had to limp home for three miles, “to the remarkable terror, by-the-bye, of the two big dogs.”

“Boisterous companions as [Turk and Linda] always were, the sudden change in him brought them to a stand-still; and for the rest of the journey they crept by the side of their master as slowly as he did, never turning from him,” recalled John Foster in The Life of Charles Dickens, published in 1876. “He was greatly moved by the circumstance, and often referred to it.”

Turk was not only unnerved, Foster noted, but the expression he had as he looked upward to Dickens' face “was one of sympathy as well as fear.”

In 2010, a leather and brass collar owned by Dickens fetched $11,590 at auction. The collar was not inscribed with the name of a dog – only Dickens name, as well as his address at Gad’s Hill Place in Higham. But some dog experts surmise it belonged to Turk because it at 23 inches long, it would have been too small for his other dogs, including a Newfoundland name Don and his son Bumble. And the fact that Dickens kept it suggests it was a memento of Turk, who died suddenly “upon the Railway,” just months after Dickens experienced a train crash that killed 10 and injured dozens others. 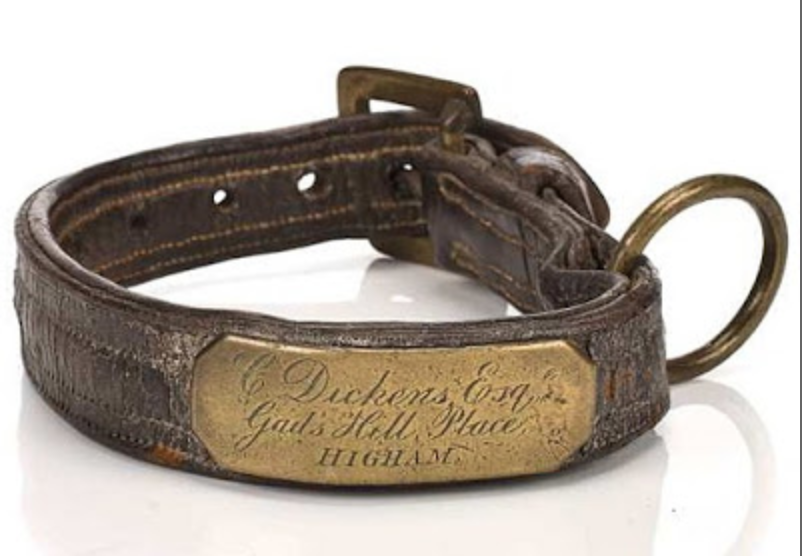 A dog collar owned by Dickens and presumed to have belonged to Turk.

Soon after, fellow novelist Percy Fitzgerald gifted Dickens with Sultan, an enormous young dog with a buff-colored coat and jet black muzzle. Unlike Turk, who Dickens described as “full of affection and intelligence,” this new arrival had “a profound absence of interest in my individual opinion of him which captivates me completely,” his new owner admitted.

Reportedly “as big as an average lioness,” Sultan had an iffy pedigree: Mamie Dickens described him as “a splendid but fierce Irish bloodhound,” while Fitzgerald called him “a magnificent Spanish mastiff.” And while he was intended to help cheer Dickens after his loss of Turk, Sultan brought with him an entirely different kind of grief.

“Every living thing, little enough, was fodder for his ravenous maw and for his zest for catching and killing. His nightly rambles through the neighborhood were followed by floods of protesting letters from folk whose smug grounds he had invaded,” Terhune wrote in A Book of Famous Dogs. “Homeward the dog would trot at dawn, blood-smeared and tired, yet with his stout steel muzzle still in place around his jaws.” 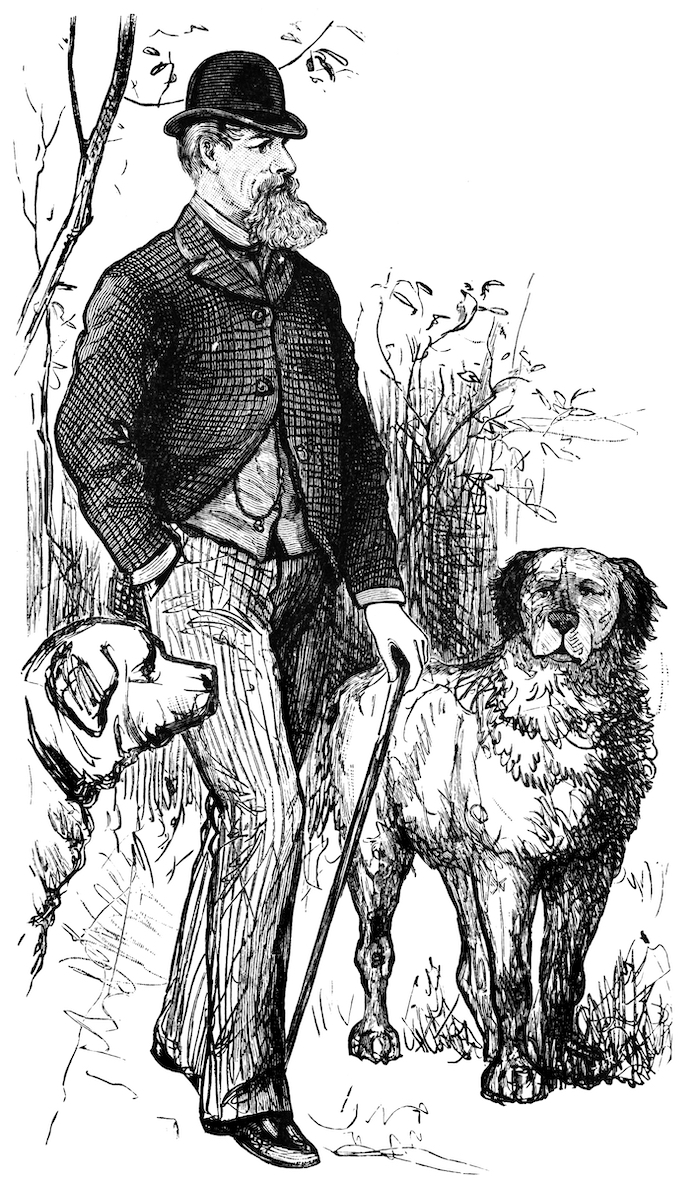 A 19th-Century illustration of Dickens and his dogs. He was fond to taking long walks with them about the countryside, and took pleasure in the idea that they were the "terror of the neighborhood."

Initially, it was decided that Sultan would sleep in the hall at night, an arrangement that change once he tried to “bite his way out” through the front door, according to Mamie Dickens. She noted that eviction to the outdoors – where he was chained whenever he was not out and about with Dickens – led to his demise. “He was not fitted for the sort of life he led,” she wrote, “and the chaining up in the yard made him even fiercer than he was naturally.”

For his part, Fitzgerald later confessed to having had “sundry misgivings” about the dog. “These beasts are of a ferocious kind,” he wrote, “and are or were used in their own country for the amiable occupation of hunting down escaped slaves.’”

This description cast still more doubt on Sultan’s identity as a Spanish Mastiff; that breed, of course, is a livestock guardian, and had nothing to do with tracking down slaves, which were few and far between on the Iberian Peninsula. By contrast, the Americas were home to two breeds specifically used for slave-hunting: The Fila Brasileiro, which really did not enter into the consciousness of the Western world during the Victorian era; and the now extinct Cuban Mastiff or Cuban Bloodhound, which certainly did. Described as being Bullmastiff-like, with a black mask and a correspondingly dark temperament, the Cuban Mastiff certainly seems like a reasonable match for Sultan. 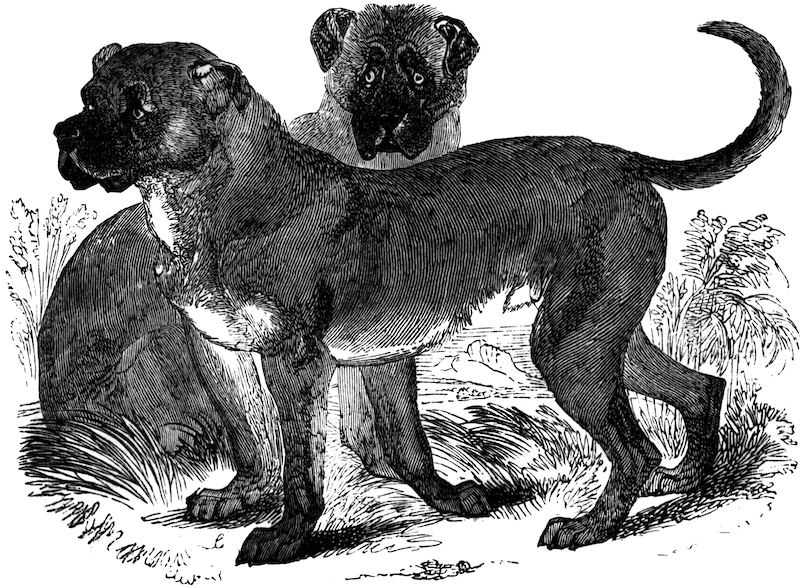 Period depiction of the Cuban Mastiff, or Dogo Cubano.

Breed aside, Sultan was unmanageable at best. He was so dog aggressive that Dickens could only walk him with a muzzle, and the only thing that was a bigger target for his killer instinct was anyone wearing a uniform. When Dickens’ gardener had a hostile encounter with a vagabond, Sultan was turned loose to deal with him. But when Sultan spotted two policeman in the distance, Dickens had to throw his arms around the dog’s neck and call out to the officers to get out of sight for their own safety.

Such indiscretions meant that Dickens was increasingly making financial restitution to Sultan’s victims, something that the notoriously thrifty author, who had grown up in “black poverty,” did not appreciate. The final straw came when Sultan broke his chain, attacking and nearly killing the younger sister of one of the maids. Furious, Dickens beat the dog, then had his head gardener take him to a far corner of the estate and shoot him.

“He was the finest dog I ever saw. Between me and him there was a perfect understanding,” Dickens wrote. “But, to adopt the popular phrase, the understanding between us was so very confidential that it ‘went no further.’ His execution was very affecting.”

Terhune was less sympathetic. “So much for the fate of a magnificent dog,” he concluded, “but a dog that had no more place in a peaceful English country home than has a mailed Visigoth at a village prayer meeting.”

Unlike Dickens’ novels, his dogs have receded into the mists of time. Given the mayhem they generated – in particular, the incorrigible Sultan – that might be for the best.

© Modern Molosser Magazine. This article may not be reposted, reprinted, rewritten, excerpted or otherwise duplicated in any medium without the express written permission of the publisher.
Tue, 05/05/2020 - 12:11am