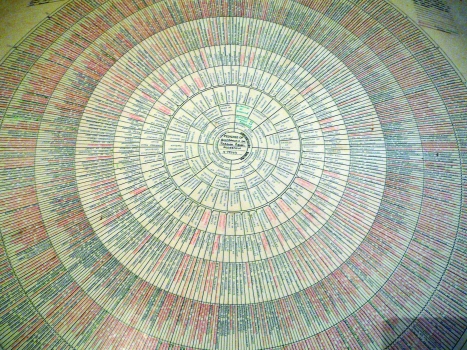 When I got my first Mastiff about 30 years ago, I fell in love with the breed, and wanted to learn so much more about Mastiffs and their history. My dog’s pedigree showed he was from imported English lines, so, noting the breeder of his sire, Farnaby Friendly Flattery, I took pen to paper and wrote to Mrs. Elizabeth Baxter, now my dear friend Betty.

Many letters followed back and forth between us. Betty was and is a wealth of knowledge on Mastiffs, and is always willing to share. I decided to import a dog from the U.K., and Betty helped me find one. She also told me she would do a pedigree on this dog for me.

Some time passed, and a poster tube arrived in the mail. Inside was the most fascinating 10-generation circular pedigree – it blew me away. I poured over it for weeks, astounded at the work Betty had done and the names on it. I had it laminated to protect it and put it up on my wall so I could see it daily. It’s there to this day.

I had to try this out myself, so Betty sent me some blank charts. I decided to do one on my first Mastiff, and it was wonderful to trace his lines back to dogs like Templecombe Toris (Taurus) and Sally of Coldblow. It also inspired me to start a collection of pedigrees that today numbers in the thousands, including every Mastiff in the U.K. from 1880 to today, most of the Australian ones, and many American and European Mastiffs. Janine Morffew (right) on a visit to her pedigree-making mentor, Betty Baxter.

I love doing these pedigrees, and, as Betty showed me, I color-code the names to the country of birth. So, for example, Australian-born dogs are written in black, English in blue, American in red, European in green, Canadian in orange. Sometimes, I alternate the colors for a change. When finished, I laminate them for protection.   It’s not easy work, by any means: There are more than 2,000 names on each pedigree, which is approximately one meter, or one yard, square, and you have a very small space in which to write. A name like Caemes King Edward of Jilgragon or Parcwood W. Bear Esq of Lesdon must fit in an area that is 2 milimeters by 40 milimeters (roughly, 1/13 of an inch by 1½ inches); you have to be able write with incredibly small letters and still be able to read it. Names like Warren are a blessing. I am sure these pedigrees are responsible for my now having to wear glasses, too.

I use an Artline 220 felt tip pen, size 0.1 – the finest nib I can find. Anything larger takes up precious space and can blur the wording. Whenever inbreeding took place, the repetition makes the circular pedigrees easier. Other entries are more difficult, as there can be one dog that was used only once, or had only one litter, and finding information could mean lots of research on those lines.

Time factors vary, too; sometimes a pedigree will take me months. I have strict rules in the house when I am doing them: No food or liquids in the same room. I broke my own rule with the last one I did on a friend’s Australian dog. Cup of coffee in hand, I was walking past the table with the almost-finished pedigree set out when I slipped. The coffee went up and landed all over the work. Not very happy, as I had to start again.

I don’t like to make a mistake, as the area is too small for correction fluid like Wite-Out, which can make it too thick to write on and blur the wording. You must be so careful and think about every dog you enter. Because the pedigrees must be correct and totally error free, I did have quite a few re-starts when I began. Some names are short and sweet, such as the simply named Warren (above). Other dogs, such as Parcwood W. Bear Esq of Lesdon, below with Betty Baxter, strain the space allotted. The quickest pedigree I have ever done took two days; that one was for myself and I wanted it for a project I was doing. That was a solid timeline, with very little sleep and a very sore hand!

I am sure there are people out there who do these circular charts for other breeds, but I only work with Mastiffs. There is so much work involved that I charge $250 each; the laminating alone costs a fair amount, and postage is included. When I did one as a raffle prize, the winner did not understand that I did not have it with me, and it would take time to get it to her as it had to be completed. Thankfully, she was very happy with her prize when it arrived, and finally understood why it took time. Dogs in the pedigree are color-coded to reflect the country in which they were bred. Blank 10-generation pedigrees are available online at sites such as www.ancestrycircle.com. For the very ambitious, the site sells 15-generation charts as well.
I have done five pedigrees for myself and 10 or so for others. Two that I did for a friend who was importing a couple of dogs from the U.S. were the best – wonderful pedigrees that presented quite a challenge until I got back to the English lines behind them.
The Internet has made things easier, with many breeders having pedigrees on their sites. (Thank you for that!) Those who don’t are usually pretty quick getting back to me with the information I need – much faster than the pen-to-paper days.
I may be wrong in this, but I think there are only two Mastiff people who do these 10-generation circular pedigrees – that is, Betty and myself. I recommend trying them out. They are fun, can be frustrating and very time consuming, but worth every minute. And, trust me, they are a real talking point with visitors – even non-doggie ones!
© Modern Molosser Magazine. This article may not be reposted, reprinted, rewritten, excerpted or otherwise duplicated in any medium without the express written permission of the publisher.
Thu, 11/19/2015 - 12:33am