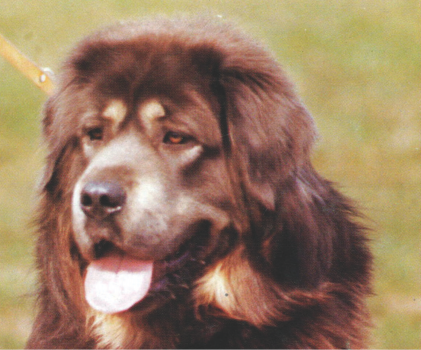 Tu-Bo, a very influential Nepalese import to Europe in the late 1970s and early ’80s.

A cautionary note on the profusion of different Tibetan Mastiff "styles"
By
Marta Kowalska
Tibetan Mastiff breeders all over the world have much in common: We all want to enhance the breed in the direction of stronger bone, bigger size, better coat and more impressive heads.
Such a progression is normal development for every Molosser breed, but it can also bring danger. In our search for those qualities, we may sacrifice breed characteristics that are so vital in the Tibetan Mastiff. Many of our goals focus on the dog’s appearance, but they can be a cause for concern when they begin to affect movement and health as a consequence.
During the last decade of attending shows throughout Europe, I have seen a massive change in direction in the breed. Specific breed types being exhibited, all having certain characteristics: China, Taiwan, Europe and America have all developed certain “flavors” of Tibetan Mastiffs. There is such diversity in breed type, construction, conformation and color – worrisome, as we are all supposed to be breeding and exhibiting the same breed.
For example, while neither the FCI nor AKC standards outline a height limit, only a minimum (which is 66 cm, or 26 inches, at the withers for dogs and 61 cm, or 24 inches for bitches), oversized examples can reach almost 80 cm (31.5 inches) tall.
We are seeing domed skulls, over-defined stops and non-typical expressions for the breed that are more akin to Newfoundlands. In still other dogs we find a lack of stop, no occiput and long muzzles. Some dogs leave the impression of another breed entirely, such as the Pyrenean or Spanish Mastiff. Loose pendulous flews, heavily wrinkling and an abundance of loose skin to the neck and shoulder show more similarity to a Neapolitan Mastiff. Incorrect depth and quality to the coat, incorrect toplines, and lack of chest are other problematic areas. We are seeing examples with low set ears and eyes that show too much haw.
Some dogs have too much coat, some not at all. Skulls can be domed or flat, very high or quite small. Color variation is immense, everything from black to cream to almost white, or tan turns to be white. (Such a big variety of type has been not observed among blues, or blue and tans.) This variety in the breed has been present in show rings for the last five or six years, when new bloodlines from Taiwan appeared in the breeding population. During the last three years, Chinese imports have added to the diversity of the gene pool.
Most European dogs, and by extension those exported to the United States, come down from very early Nepal imports. They were mostly of the same type, with characteristics so typical for the Do-khyi. Their progeny gave European breeders some magnificent examples with moderate to heavy bone, long enough coat, desirable type and free movement.
Today we call this type “typical” or “traditional” Tibetan Mastiff type. Recently, I have heard this called “old type,” which it is not. It is correct type.
As a breed develops, its breeders should aim to obtain a more homogenous, not a more varied population. In the present situation, the Tibetan Mastiff is moving in a direction of more and more various types – many of them further and further away from the FCI standard.
What the FCI standard says:
SEVERE FAULTS :
Lacking physical condition and fitness.
Head light or heavily wrinkled.
Pendulous flews.
Pronounced dewlap.
Large and/or low set ears.
Light eyes or staring expression.
One of the catch phrases at the moment is “Fit for purpose.” Can Tibetan Mastiffs with long backs, loose movement and lack of rear angulation carry out the job for which they were bred, travelling long distance with their masters, guarding flocks and property?
In my opinion, our breed is changing so much not in order to improve health or temperament, but to meet the demands of buyers who want larger dogs or different colors, or to fulfill trends and whims. All these reasons are invalid and move us away from our breed standard.
In the future I feel we will see greater diversity within the breed, and more division, with perhaps calls from those involved in breeding these different types for a split within the breed, as happened with the Akita Inu and American Akita. If we don’t pull together we may well see classes for Do-khyi, Tsang-Khyi, Tiger type, Lion type, Euro type – or whatever we choose to call these types of what should be plain and simply Tibetan Mastiff.
© Modern Molosser Magazine. This article may not be reposted, reprinted, rewritten, excerpted or otherwise duplicated in any medium without the express written permission of the publisher.
Sat, 03/31/2018 - 2:56pm