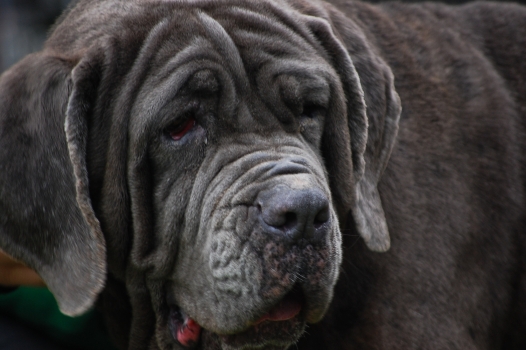 A Wrinkle in Time

Judging the immature Neapolitan Mastiff
By
Pierluigi Scalia
Understanding breed standards involves grasping important details of how a particular breed matures. This is even more crucial for breeds that grow exponentially, like the Neapolitan Mastiff, where the weight alone can increase variably from 50 to 150 pounds in the first 15 months of age. During this critical maturation period, the changes can be so radical that it is sometimes difficult to recognize the same dog! This has a huge impact when it comes down to breed-standard interpretation and the choice for ring placement.
Most Neapolitan Mastiffs usually are not mature enough to fully fit the breed-standard description until 15 to 18 months of age. During the first year, the majority of dogs and bitches will grow in height more than width and usually will not carry the substance we want in the adult. The growth in head and body “diameters” (meaning the width of the head, muzzle, chest and the “thickness” of the bone in the forelegs) starts variably after one year of age and continues steadily up to four years without interruption. 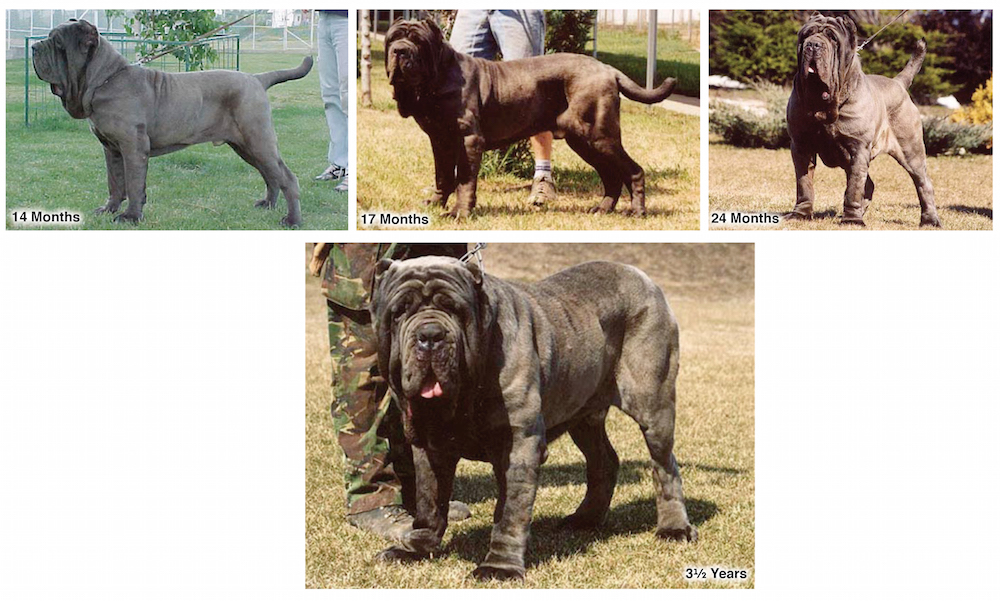 More than any anatomical region, the Neapolitan Mastiff head continues to mature and change with time. One has to first be able to evaluate the shape of the skull and the muzzle, trying to envision the same head with no wrinkles. (I know, easier said than done, but it’s a skill that must be learned in order to pick the best heads.)
When looking at the head, I always search for frontal, lateral and dorsal views, giving me the full sense of the “tri-dimentional squareness” of the muzzle and skull (ideally, two perfect cubes). The average developing Neapolitan Mastiff will display full cubical head parts before 20 months of age. Importantly, in the best heads the width of the muzzle is wider than half the byzigomatic length (the distance between the cheeks). The most promising heads start displaying such proportions and parallel planes earlier than 18 months of age, despite an incomplete maturation of their wrinkles. Therefore, a younger dog must be rewarded for holding an exceptional head volume, planes and proportions rather than penalized for not having completed his wrinkling maturation, as long as the “main” wrinkles (those descending from the inner and outer border of the eye) are present. On the other hand, an older dog head should not be rewarded over a younger dog if it does not hold proper head volumes and parallelism in all head planes (including the lateral) in spite of a complete wrinkling pattern.
I also look at the distance between the eyes, since in the best heads the eyes are spread well apart on a flat and wide skull structure, compared to dogs with unpleasant expressions given by a narrow head and eyes too close together. This last trait has to be seen as a normal phase of head development in an immature dog, but is certainly not to be tolerated in an adult head.
Therefore, taking into consideration developmental stage, the bone component of the Neapolitan Mastiff head should be considered and judged separately from the wrinkling and skin representation. In fact, when looking at the maturation of the wrinkle and skin in the Neapolitan head, many non-specialist judges prefer dogs with complete sets of wrinkles and a dewlap almost descended to the lower level of the neck, even before one year of age. Not a good pick! These dogs should be considered hypertypical and not placed over exhibits in the same age group bearing more balanced features in absence of other structural defects.
Photos courtesy of Pierluigi Scalia. 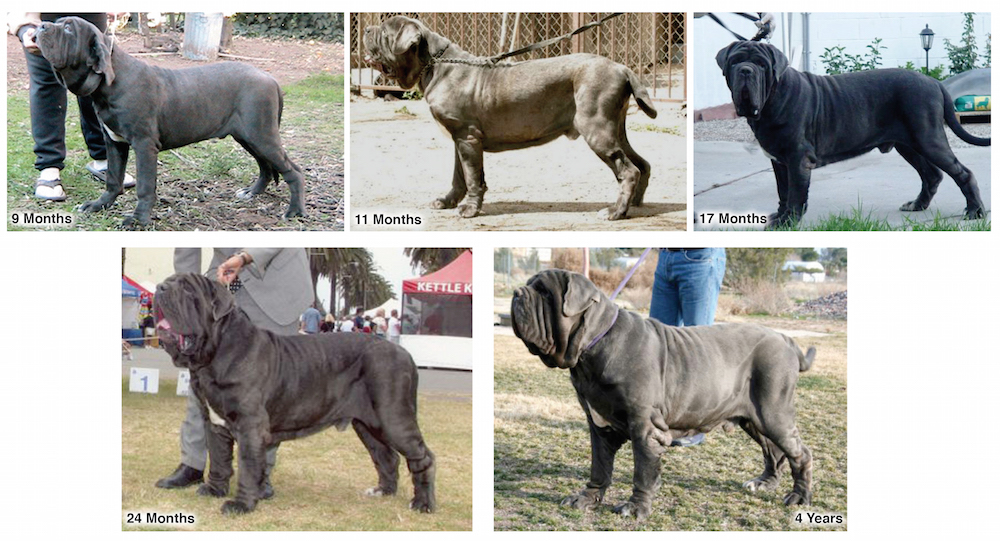 Most Neapolitan Mastiffs bear the “main” wrinkles (again, the ones descending from the inner and outer border of the eye) starting at four months of age. However, most of the other sets of wrinkles (including the ones covering the topline of the muzzle and wrinkling in the front and skull) in young dogs should not be judged in detail and valued more than a wider muzzle and skull and proper head proportions. The design of wrinkles can be fully appreciated only when the exponential growth phase for the underlying skull and muzzle bone development is complete (15 to 18 months) and the slower maturation phase begins. Extremely descended lips (not supported by a wide muzzle and jaws) and excessive dewlap (reaching below the point of the humerus) should be considered hypertypical at all ages, but even more so in dogs younger than a year. They should not be placed over more balanced young dogs with proper bone substance and breed type but still developing skin (wrinkles well designed and distributed but not as marked as in the adult).
A direct consequence of such breed-specific features is the difficulty for non-specialists to spot an “exceptional” young specimen, which is mistakenly envisioned as a dog bearing features that we want to see in older dogs, such as an amount of skin and bone development comparable to mature dogs (which must be seen as a sign of excessive type). This is why it is wise to always ask the steward to look up a dog’s age before finalizing placements.

Growth Progression in a Neapolitan Female 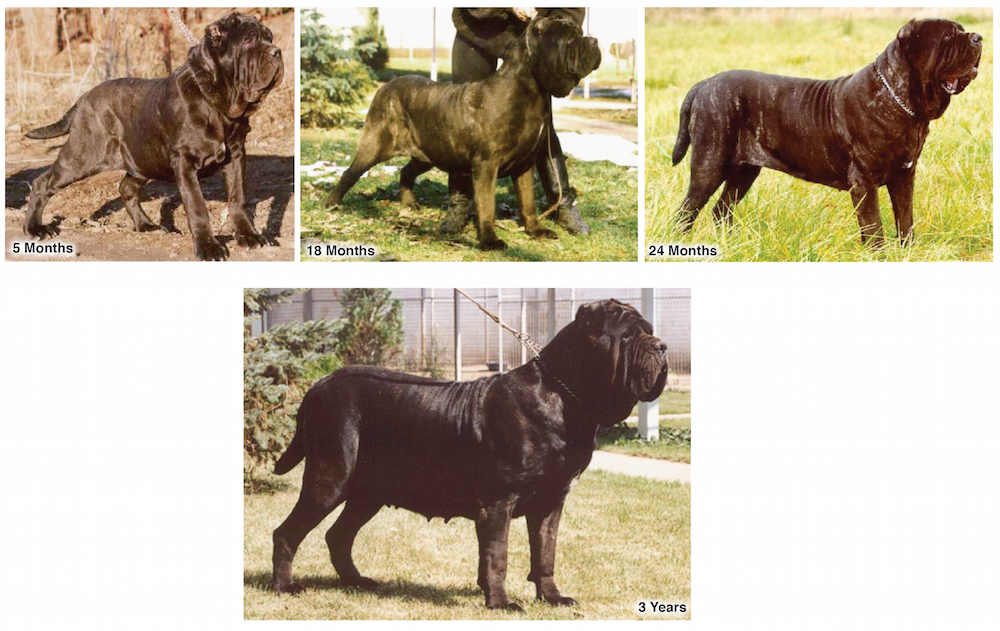 One very common mistake is to think that a young Neapolitan Mastiff will “grow into its own skin,” like a Shar-Pei. The skin amount in the Neapolitan Mastiff develops gradually and never anticipates or overcomes the development of skeletal bone in this breed. A young dog with excess dewlap and skin in his hindquarters is not a good example of the breed standard and will become even more excessive with age! In fact, it is more desirable to have a youngster with excellent bone construction and still developing skin than a lighter (or thinner boned) adult with much more skin throughout its head and body. In both young and mature dogs, we evaluate skin quality by searching for “thickness” when pinched, even if loose from the underlying muscles.
Regarding skin maturation and its distribution during maturation, I always keep in mind the concept of “functional beauty” that has been developed in the old country. Functional beauty does not necessarily reflect an “aesthetic” concept, especially when exhibiting adult or aged Neapolitans in the conformation ring. This key concept directly applies to the abundance of skin (almost forming skin “paddles”) on the dogs’ elbows (which are bigger in heavier dogs) and the marked skirting of the skin in the lower line of the body, especially in females that have had litters  (proof that the bitch is also a proven reproducer). Of course, these last skin-distribution features should not be so evident in a younger dog.
In the end, then, the best young dogs should be considered those that already display no deviations from the standard and bear outstanding head planes and proportions. These dogs cannot usually compete with an adult in the show ring, the only exception being when competing with an adult that bears major faults (i.e., severely penalizing and/or disqualification points). Therefore, an average-built adult with correct head type is usually to be preferred in the ring to a youngster.
© Modern Molosser Magazine. This article may not be reposted, reprinted, rewritten, excerpted or otherwise duplicated in any medium without the express written permission of the publisher.
Thu, 08/09/2018 - 8:24pm