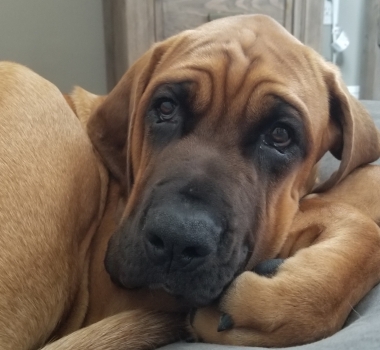 I first learned about the Tosa Inu in January 2007. I was dating a woman who had a Mastiff-Rottweiler mix named Roxie. One day she – the woman, not the dog – called me up and said, “I don’t want to see you anymore.” I wasn’t upset with the breakup, except that I was really going to miss Roxie.

My business partner at the time challenged me to get my own dog, so I went to Barnes & Noble and bought a dog-breed book. Thanks to Roxie, I knew I wanted a mastiff-type breed, but I had no idea that mastiffs come from all over the world. Flipping through those pages, I fell in love with the Tosa Inu, the Japanese fighting mastiff. While I’m very much against dog fighting – it's beyond disgusting and cruel – I was drawn to the lore and history associated with the breed.

I saw my first Tosa Inu a month later. I had started Googling the breed, and found a breeder named Serena Burnett of DogStar Kennel in my home state of California. Serena had a litter of puppies, but they were all spoken for.

“What if someone cancels?” I asked.

She laughed. “This is a rare breed. No one’s going to cancel.”

“What if I pay more?” I persisted.

“Thank you,” she replied politely, “but that’s not how it works.”

Since I had never actually met a living, breathing Tosa, Serena invited me to visit her at the wild-cat sanctuary where she volunteered. She had two Tosas with her, and they were free to wander around the cages of these lions and tigers that had retired from their show-biz careers.

I remember thinking the dogs weren’t as big as I thought – I was imaging them to be the size of rhinos. The thing that really impressed me was just how agile they were. There was a picnic bench, and one of these Tosas stood next to it and went boink, jumping almost vertically to land on top, just like a helicopter. Even if they aren’t as big as a rhino, they are amazingly agile for dogs of their still-considerable size.

Though her puppies were all spoken for, Serena told me about a breeder in Portugal who had a litter on the ground. After a series of emails, Flavio Morais of Wielie Walie Tosa Inu in Lisbon offered to ship me a puppy, but that pesky real-estate partner of mine spoken up again, challenging me to broaden my horizons and take a trip to the Iberian peninsula. And so I did, returning after three weeks with my 10-week-old puppy, Rusty II.

(You’re probably wondering about Rusty I. In 1958, when my mother was pregnant with me, there were headlines in the New York City tabloids about a child that had gone missing and was later found dead. Jolted by those stories, my dad packed the car, and we left the Bronx forever, along with this reddish-colored mutt he had rescued named Rusty. When I was born into our new California home, Rusty was there. And, in a kind of cross-species twist on the Jewish tradition of naming a new family member after a beloved relative who has passed, I decided that all my dogs would be named Rusty.)

After owning and raising my own Tosa Inu, I’ve discovered some misconceptions and exaggerations about the breed. Top of the list: Not every Tosa Inu is a “dog-killing machine.” 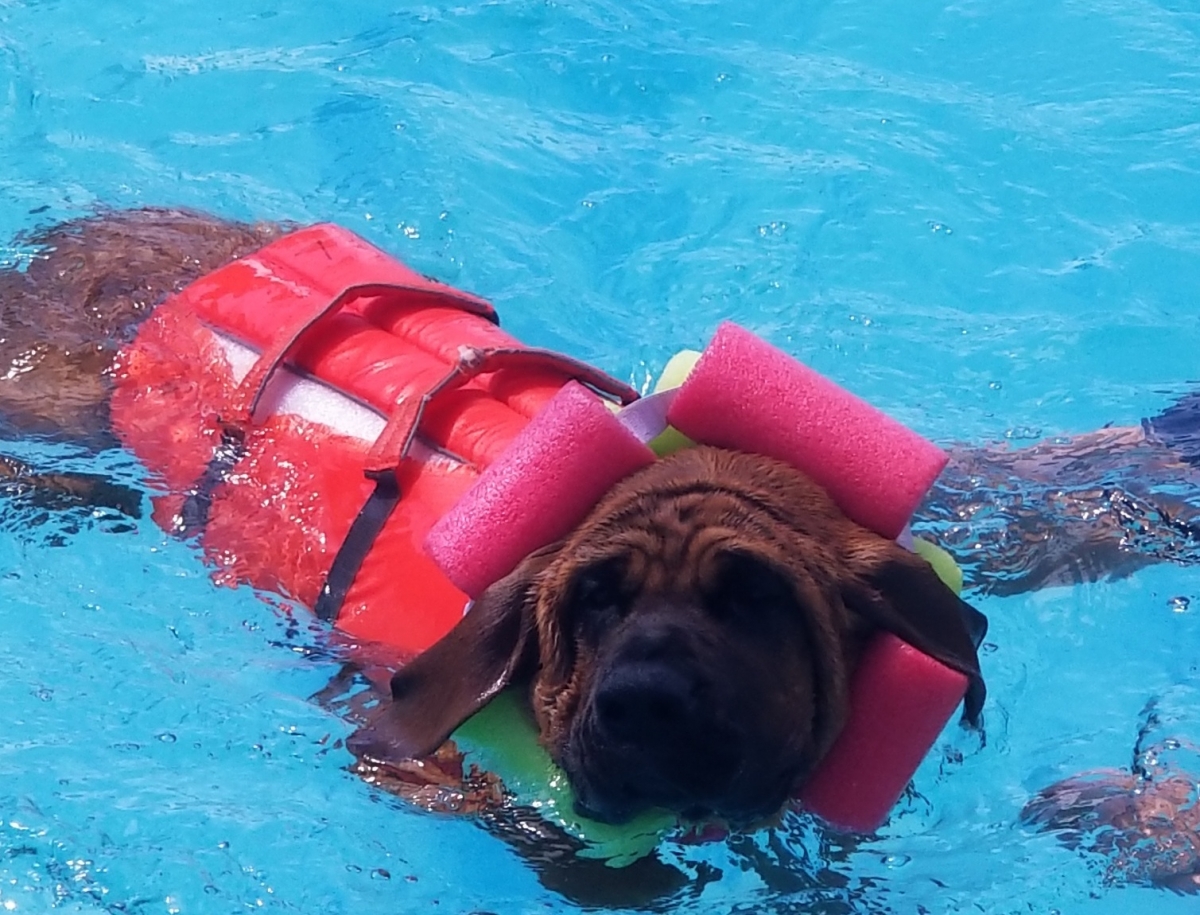 Rusty III going for a swim.

Rusty was sometimes aloof, but generally very sweet with humans. And he was friendly with most other dogs, too, especially those that he got to know. We would go on regular group walks with Beagles and Labs, and he was just another dog, walking alongside them. It wasn’t like if he saw a Chihuahua he would want to gobble it up. As Serena Burnett told me, “The perfect temperament for the Tosa is passive. You do not want an aggressive Tosa. But if another dog brings a fight to the Tosa ... the Tosa will finish it.”

That happened twice with Rusty while he was on leash and under my control. Each time, he was attacked by an off-leash dog – a Pit Bull and a small but crazy Cane Corso mix. True to Serena’s words, Rusty quickly ended the fights. In both cases, Rusty suffered only very minor injuries, but the aggressors each went to the vet with significant wounds that required surgery.

That said, Rusty was difficult to handle as a very strong puppy and adolescent. Once, while we were at the beach, he saw a dog he wanted to visit – and he dragged me through the sand like I was an anchor. Left unchecked, I would have had a monster on my hands. It took some time to get him accustomed to walking on leash, next to or behind me, without wanting to charge ahead. But I invested the time and effort to socialize him, and he settled down nicely after about age three.

Tosas are not intrinsic guard dogs, as I soon learned. One day, I decided to play a trick on Rusty, who was still a puppy, and I slowly opened the front door of the house, keeping it ajar. Rusty kind of stuck his head out from the doorway and let out one woof, as if to say, “I know you’re here – get out.”

With that, I blew the door open and shouted – and Rusty literally ran out of the open back door of the house, peeing all the way. As I got the mop out, I realized the joke was on me.

Later, I learned that Tosas need to be taught confidence. Of course, one should never encourage aggression toward people in any breed, but when a Tosa barks at a strange sound or noise, they should be gently encouraged, so they make the connection that they are a guard dog.

With the possible exception of Denise Flaim, who publishes Modern Molosser, nobody ever got Rusty’s breed right.  Most people guessed Bullmastiff. Many people would call him “the Sandlot dog,” thinking he was a Mastiff like the dog in that well-known movie. Some would even refer to him as “the dog from Turner and Hooch,” which, of course, was a Dogue de Bordeaux.

I was always eager and happy to explain: “Rusty is a Tosa Inu, a rare-breed Japanese mastiff, sometimes referred to as a Japanese fighting dog.” 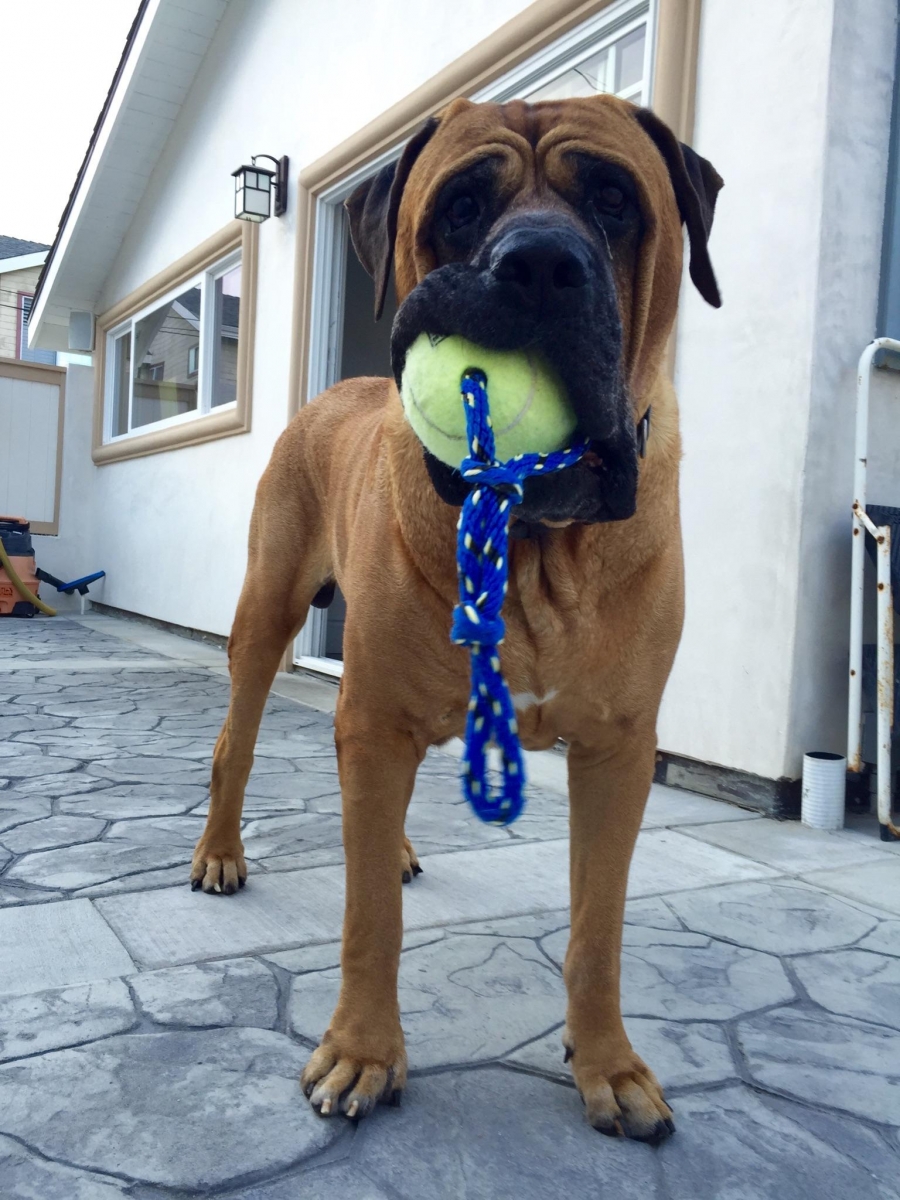 Rusty II, having a ball.

I think the ideal Tosa owner is someone who has experience owning and handling a giant-breed dog, preferably a bully breed. Tosas are not only headstrong, but enormously strong and powerful. Most humans – even grown men – simply can’t match a Tosa’s physical power. As a result of their selective breeding for dog fighting, Tosas have a very high pain tolerance, and trying to “win control” by being “physical” is a losing battle.

Instead, Tosas must be controlled psychologically – made to obey and submit from a position of human leadership. They are more likely to obey an owner who has a strong, authoritative presence – and voice. Despite their enormous physical strength, Tosas seem to be very sensitive to the tone and volume of their owner’s voice. They cringe if you say, “NO.” That voice control makes sense when you think about their original purpose: Typically, there would be one or two referees in the fighting ring, and the dogs needed to be aware of and respond to their instructions.

The “right Tosa owner” must be someone willing and able to dedicate time, energy and money to work closely with his or her Tosa from puppydom through adulthood, carefully and lovingly socializing and training their Tosa to be a “good canine citizen.” Compared to smaller-breed dogs, Tosas and other giant dogs require additional food and veterinary care. Accordingly, the “right Tosa owner” is also someone who has the ability, desire and financial resources to care for this special breed.

The “wrong Tosa owner” is anyone who thinks that the Tosa is just an interesting, freakishly large, super-strong, exotic rare breed that’s fun to own merely because it’s a status symbol that will impress their friends.

The Portuguese breeder that I got my first Tosa from said, “The Tosa Inu is like the Astin Martin of dogs – they are so rare you almost never see one, and the fact that you can go really, really fast in them doesn’t mean you should.”

After 11 years together – which is a really long time for a giant breed like the Tosa, but it wasn’t enough for me – I had to let Rusty go. As you can imagine, I was devastated. I own a company called, appropriately, Molosser Apparel, and when I was developing my super-high-tech dog coats, I had the manufacturer make an extra-extra-large sample for Rusty. He wore it any time the weather was cold or nasty. After he died, I washed it and hung it in the closet with a pinned-on note that read, “Reserved for the next Rusty.”

That coat’s been hanging there for a while. It took me more than a year before I would even consider getting another dog, let alone another Tosa. But the emptiness in my home and, moreover, in my heart, simply became overwhelming. So, I began my search for a new Tosa puppy, which led me to Enrico Drudi of Tisama Tosa Inu in San Marino.

The author with his newest puppy, Rusty III.

To be honest, I had no idea where San Marino was, and I was surprised to find that the Most Serene Republic of San Marino – that’s its official name, honest – is a small constitutional republic – the oldest in the world, actually – that’s completely surrounded by Italy, near the coastal resort of Rimini. That didn’t sound like such a bad place to visit.

I made three trips to San Marino in a seven-month period: First, to meet Enrico and his dogs. (After he picked me up at the Rimini airport and we pulled up at his home to see five Tosas standing expectantly at the gate, I was in Tosa heaven.) Next, to see the puppies and pick one. And, finally, once Rusty III was four months old, to pick him up – literally and figuratively, though I could barely hold him in my arms – and bring him home to California.

Since Rusty III arrived home more than a month ago, I can honestly say he’s become the center of my universe. I thoroughly enjoy feeding, caring for and training him.  We signed up for puppy socialization and training classes, and I even take him for weekly swim lessons. I’m also in the process of hiring a well-respected professional dog trainer to assist with more advanced and one-on-one training sessions.

Frankly, I couldn't be happier. After all, once you have a Tosa, no other breed will do.

When Rusty III is no longer with me – which I hope is many, many years from now – will I get another Tosa? Sadly, I’m not sure. I’m 60 now, and I’m not sure if as a senior citizen I’ll be able to manage that much dog.

But for now, I’m just enjoying each day, giving Rusty III the time to grow into a well-adjusted, well-socialized Tosa Inu. In no time soon, I’m sure, he’ll be 160 pounds – big enough to wear that special coat waiting for him in the closet. Time to unpin that note.

Larry Herman is the founder of Molosser Apparel.

© Modern Molosser Magazine. This article may not be reposted, reprinted, rewritten, excerpted or otherwise duplicated in any medium without the express written permission of the publisher.
Sat, 06/08/2019 - 5:05pm