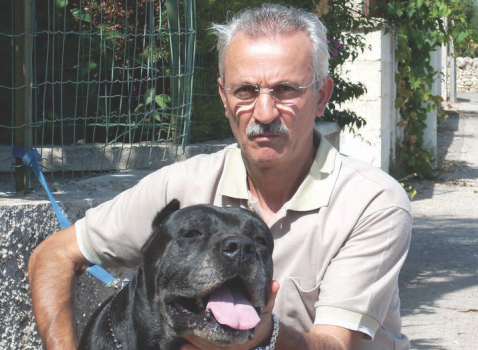 ... Vito Indiveri of the Dyrium kennel in Italy, a name that is synonymous with the Cane Corso

A traveling salesman whose work brought him to the remotest farms and valleys of southern Italy in the 1970s and ’80s, Vito Indiveri rediscovered the rustic dog of his grandfather’s day, which was still valued and held closely by the peasant farmers he visited.

Indiveri saw how the farmers bred this utilitarian working dog to fit their specifications: Corsos who lived on the plains had short fur, while those in the colder interior regions had a longer coat – though they all shared a great agility and athleticism. He observed how the traditional ear crop was done, “raw,” with a pair of scissors, and then a salve of ash and olive oil. And he noted how, among these “genuine people,” the bloodlines were jealously guarded, and the dogs never sold.

Inspired by the dogs and fearing for their extinction, Indiveri orchestrated breedings to help preserve and expand the gene pool, and for his trouble he was permitted to take a puppy or two from these remote farms, where they had been bred and valued for centuries. And so his famous Dyrium line was born.

Here, he talks about Cane Corso type, the breed’s unique temperament and the reason he left the breeding ranks.

What are the most important aspects of Cane Corso type for you?

The expression, the elegance, the power, the agility and, above all, the strong character that is at the same time balanced and sensible. Indiveri’s foundation sire, Plud, was a great producer for his kennel. Can you explain a bit about correct Corso expression?

The expression of the breed is not easy to explain to people, because to be correct, the measurements and proportions of the head and body must be those outlined in the standard. But it is important to know that these alone are not sufficient to create a correct expression if they do not blend with the necessary balance to give the impression of ​​quiet strength and nobility. I would say, in a holistic sense, that the whole is much more than the sum of its parts.

As one considers the state of the breed today, I exhort breeders to put more focus on the convergence of the axes of the skull / muzzle, which must be light; to the position and shape of the eyes; to the parallelism of the sides of the muzzle; and to noses correctly aligned to the front face of the muzzle. I hate to say it, but today, even at major shows, you can see dogs with expression borrowed from other breeds, and judges who do not recognize a correct Cane Corso indicate these dogs to be models to follow. This is a real threat to the future of the breed.

Is it possible to have correct expression with an uncropped ear?

I have no difficulty in admitting that the cropped ear has always characterized the expression of the breed, and that the same dog with uncropped ears has a very different expression.

Those who claim otherwise maybe never have understood how the expression of the breed should be, and this does not surprise me. Some may not know better, and others breed in bad faith because they just prefer a more muted and less incisive expression that is easier to achieve and maintain in breeding.

But if in the end we must have an uncropped ear, we will need to deal with this new situation and invent something that will return a new expression to the identity of our breed.   Of course, it will no longer be the expression to which we are accustomed. What are the major differences in the breed when you started, and where it is today?

In the years in which I have been distant from the Cane Corso world, without a doubt the breed has seen a rapid growth, and is now recognized around the world. Strong economic interests have given rise to some breeders who are not very serious, and who certainly are more interested in making profits than a real passion for the breed, in selecting a dog that is more hypertypical, reducing the size and making him lose his typical character.

What do judges misunderstand about the breed?

They do not understand the correct expression. It is proud, fierce, attentive and noble, making the breed, in my opinion, unique. The head in its general conformation should be angular, rather square, and certainly never rounded. David del Dyrium, an influential sire who was linebred on extensively in Indiveri’s breeding program.

What is “hypertype” in the Corso? Where do breeders err most often in this area?

The problems of hypertype are biconvergence (in which the axes of the cranium and muzzle meet each other), very pronounced convergence, a round eye that is often incorrectly postioned in the front of the face; a muzzle that is too short, a nose set back from the vertical line of the muzzle; and too compact construction with a length of body that is too short.   The presence of one or more of  these faults should make us reflect on the choices breeders have made in their selection and guide judges in judging dogs so they do not mislead breeders and fanciers of the breed. Dogs that have these hypertypical characteristics – and they are usually males – are often considered by breeders to be a reservoir of true breed type to be used to offset a lack type of bitches.

But males, much more than females for obvious reasons, are able to influence the distribution and frequency of the genes in a dog population, and therefore hypertype when misused can cause serious and sustained damage. Almost always, hypertype introduced in breeding programs proves to be a tremendous Trojan horse. You have observed that size in the Corso is a problem. Are dogs becoming too small? Are they becoming too “Boxer”?

The search for breed type with the consequent strengthening of specific characteristics – and so we return to the subject of hypertype – and the close breeding to preserve these characteristics are among the causes of the reduction in size. It’s true: A small-sized Corso with fixed characters may end up looking like a Boxer, but may not count a single ancestor belonging to that breed.

Why is it difficult to breed the correct Cane Corso temperament?

The character of the breed has been forged by the many jobs the dogs did over the centuries in the rural areas of southern Italy, and therefore tends to develop in relation to the environment. Again, we find the same flexibility that has always characterized the use, while remaining a dog of average docility and sociability, with a good temperament, very alert, of great fiber, combative and courageous to the highest degree, with the aggressiveness that is necessary to carry out that task. Because of these qualities the Cane Corso is a true, great guard dog and an excellent drover, but who knows how to adapt himself to the tasks of defense.

Very often aggression is aimed at anyone who hides insecurity, fear or at least lack of nervous balance. This aggression attracts many people who I think have the same shortcomings as those people the dogs react to. But the character is another thing. Indiveri with Plud in the 1998 Raduno Cane Corso in Foggia, Italy.

Why did you stop breeding? Your dogs were – and still are – famous all over the world for their type.

The decision to leave the Cane Corso world, and as a result to not breed anymore, was a difficult choice that I made over the years and was governed primarily by the disappointments, the bitterness and total disgust over the lies and hypocrisy that surrounded the Cane Corso community. At that time there were few who believed and pointed at me and my arduous work of recovery and selection of the breed, and it was eventually reduced and obscured even by those very same “experts.”

When I began breeding into the 1980s, my work began solely and exclusively with the rustic dogs found in the countryside of Puglia, first and foremost my beloved Plud, the foundation of my kennel and an excellent producer from whom descended champions known to you all. The same Plud was often the object of criticism and fictional stories regarding the authenticity of his pedigree – total inventions intended to denigrate my kennel in the eyes of others.

So, unlike others breeders who were able to acquire their foundation stock from my breeding (a fact that they often leave out), my work was difficult and long, leading to years of hard work and economic sacrifice.Among the many difficulties I should mention the three thefts that I suffered: At least 34 stud dogs and breeding bitches who disappeared into thin air, throwing years of work to the wind. Bayron del Dyrium, whelped in 1997, went on to be an influential sire for the Della Valle Dei Lord kennel in Italy.
Today that bitterness is in the past, and the acknowledgments, even if they come after many years, have arrived. It makes me smile that today my bloodline is still recognizable and differentiated for all to see!
Today the breed lives in a particular moment in time, and certainly, those who had faith in me, using my bloodlines, have achieved significant results, while others have focused more on quantity than quality, obtaining results that today are know to all.
Do you have a favorite story that sums up the character of the Cane Corso?
Many years ago I had the good fortune of hearing a true story from an elderly man from Manfredonia. He told me about a winter day in the 1950s when a violent storm forced all the fishing boats to shore. The waves, high and violent, dragged boats, cars and several heads of cattle into the sea.
The elderly Giuseppe looked on, stunned and helpless, as the sea sucked away his cattle, his life. His loyal Cane Corso, an incomparable drover, ignoring the storm, threw himself into the sea, and, one by one, grasped each cow by the ear and brought them, safe and sound, to shore.
© Modern Molosser Magazine. This article may not be reposted, reprinted, rewritten, excerpted or otherwise duplicated in any medium without the express written permission of the publisher.
Tue, 09/08/2015 - 12:40am