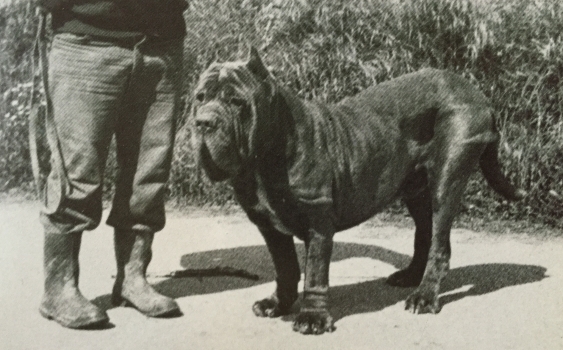 If one had to categorize all things Neapolitan Mastiff from “A” to “Z,” that first letter would stand for “allevatore,” which means, quite simply, breeder.

The cane zaccaro was a style of Neapolitan Mastiff prevalent in the mid-20th Century in which deep strengths were matched by equally tenacious faults. These leonine dogs had the incredible bone and mass so important in the breed, along with impressive heads and huge feet. But those ever-so-typey virtues came at a price: The zaccari often had short, sometimes bowed upper arms and excessive length of body, resulting in weak toplines and high rears.

Zaccaro was also a real person, a Mastino breeder outside of Naples whose given name was Gennaro Giacco. Coming from a family of farmers, he grew up with Neapolitan Mastiffs, and gave over the final years of his life to breeding them. He lived alone with his dogs in a modest apartment, the bitches reportedly chained to hooks in the walls of the largest room, the sole male permitted to wander the house and accompany Zaccaro everywhere. A typical example of a zaccaro: Boss della Grotta Azzurra, 1978. Source: Molosser Magazin/photo courtesy Christofer Habig
Though Zaccaro survived on a modest pension, he was loathe to sell any of his puppies, or permit his male to be used at stud. Like many Italian breeders of the day, he jealously safeguarded his hard-earned genetics; he could never be sure that a bitch owner wasn’t hiding away the best puppy of the bunch to keep from him claiming it for a stud fee. Still, a few fortunate friends did get to use Zaccaro’s dogs, which were, by dint of their isolation, intensely linebred.
In the 1970s and on, when bred to sounder but plainer examples of the breed that were higher up on leg, such as the Ponzano dogs of Mario Querci, the zaccari contributed exquisite type, giving breeders the best of both worlds.
Some Italian breeders talk about a return to breeding the zaccaro type, theorizing that this more “ancient” style can help rein in the hyperbole that began creeping into the breed in the 1990s: If some is skin is good, more is better. Though they were imposing in their size and mass, the zaccari did not have an excess of wrinkle, which has become the runaway train of Neo breed type the world over.
Even if the zaccari bloodlines have been diffused over the decades, the principle remains the same: That a tightly linebred family of dogs carrying certain important virtues of type can help a breed find its way, even if they themselves are not the final destination.
© Modern Molosser Magazine. This article may not be reposted, reprinted, rewritten, excerpted or otherwise duplicated in any medium without the express written permission of the publisher.
Wed, 08/26/2015 - 11:39pm

Stop, in the Name of Type
There is nothing fragile about a Cane Corso. Except, maybe, for type.