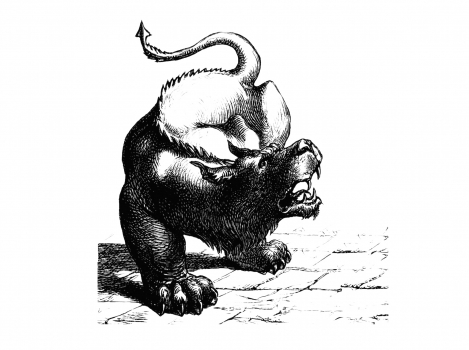 How to Breed Your Dragon

A popular app has some uncanny parallels to breeding Molossers - or any purebred dog, for that matter.
By
Denise Flaim

“I really want to breed a Frostfire.”

My peripheral hearing registered the sentence, and I stopped tap-tap-tapping on my laptop.

Was it some variation of those Windsprites that drive Whippet people to apoplexy? (Want to get them really wound up? Say it after me: Long. Haired. Whippet. Then duck.) Was it yet another “designer” breed, like a “Bolosilk”? (That hybrid results from the unholy alliance of a Bolognese, which is not a pasta sauce but rather a Bichon-like Toy, and a Silky Terrier.) Or a “Schnocker”? (That’s Schnauzer meets Cocker, which is inelegant enough coming off the tongue, much less toddling around in the whelping box.)

I looked up from my keyboard. Ten-year-old Stephen had his head bent over his Kindle Fire, thumbs flying over the e-reader screen. “What I really want is a Rainbow,” my son continued, half to himself. “But they’re really hard to breed.”

Apparently, I’m not the only breeder in this household.

Developed by Colorado-based Backflip Studios and released in late 2011, DragonVale was one of the top-grossing apps for the iPhone and Android a couple of years ago. If you have or know a child under the age of 12, chances are you’ve heard about this game, in which players create elaborate, floating “dragon parks” and fill them by breeding the mythical creatures – sort of “Jurassic Park” meets “Best in Show” by way of “Avatar.”

DragonVale players start off by purchasing a perfectly nice, but basic dragon. As he matures, your dragon produces coins, which let you buy him treats so he grows and achieves higher levels; dragons can’t breed until they reach at least a level four, and growing them to even higher levels increases the chance that they will produce rarer types of dragons when bred. You can also use the coins to purchase other entry-level dragons, which are named after the basic stuff of life: Earth, Plant, Fire, Cold, Lightning, Water, Metal. These “elemental” dragons can be bred to each other, producing hybrid dragons like Lichen or Brass or Crystal. I don’t know if any of the developers of DragonVale ever bred purebred dogs, or even own any. But the more Stephen told me about this addictive game – and addictive it is, almost as bad as the dog hobby in terms of the time drain it generates – the more parallels I saw between breeding his virtual serpents and my purebred dogs.

For starters, both require knowledge as well as a good dose of luck. Sometimes, for whatever maddening reason, a combination that should work just doesn’t.

“Unfortunately, some dragons can be hard to get, and though you may try to breed a combination that looks like they should get you a hard-to-get Rainbow or Moon Dragon or such, sometimes it just doesn’t happen,” wrote one DragonVale blogger. “I will warn you that occasionally even the right combination may take up 20 times or even more, but I promise you, these combinations will work.” Blessedly, dragon breeding is a very G-rated affair. You select your breeding pair and they go to a Breeding Cave, where plump pink hearts floating in the air denote that they are still procreating. There are no virtual ties, or recalcitrant mates in DragonVale.

Blessedly, dragon breeding is a very G-rated affair. You select your breeding pair and they go to a Breeding Cave, where plump pink hearts floating in the air denote that they are still procreating. There are no virtual ties, or recalcitrant mates in DragonVale. The sire and dam don’t even enter the cave unchaperoned, but rather mill outside it – sort of like that censor-imposed “I Love Lucy” rule where Lucy and Ricky couldn’t be seen in bed together without each having a foot visible on the floor. No muss, no fuss, none of your precious coins expended on muzzles or pipettes or rubber-backed bath mats. You might, however, opt to spend some to upgrade to an “Epic Breeding Island,” a separate floating island that attaches to your main compound with heavy silver chains and accelerates the breeding process from four to two days. You can usually glimpse the proud parents flying amid the pink hearts, or perched in a tree.

Stephen has discovered that another key to good dragon breeding is scale: The more he breeds, the more he produces, and the more he produces, the greater the likelihood that he will produce the rarer dragons he is seeking. That’s something that most dog breeders have forgotten, spurred on by animal-rights logic that says virtue is to be found in doing as few breedings as possible. I don’t know about virtue, but I do know about quality: Without numbers you are hard-pressed to consistently produce excellence. The very lucky or the very talented may accomplish it, but it is the exception that proves the rule. For most everyone else, limited breeding eventually reduces your setpoint to mediocrity, which is probably the biggest criticism of the dog world today.

“I want dragons that other people don’t have,” Stephen explained. “I like the rarest ones, the ones that it takes a lot of tries to get – the ones that are expensive and cost lots of gems to buy. You have to keep trying to get what you want.”

But in order to be successful and meet those goals, Stephen also realizes that he can’t keep everything he breeds. DragonVale has a solution for this: You can sell the dragons you don’t want to keep in the marketplace, just as we do in our breeding programs. Another option is to send them to the Coliseum, where they compete for gold, silver and bronze trophies that are awarded by wizards. (The biggest complaint among players? Same as dog-show exhibitors: The awards are too random.)

Stephen is also doing some test breedings in DragonVale, though that’s not what he calls them. “Like, sometimes I breed dragons together just to see what I get,” he told me. “And sometimes you do things by accident: You’re trying to breed one thing, and you get something else that’s just as good – or better.”

This happened when he was trying to breed the elusive Rainbow dragon – the Caligola or Medicine Man of the dragon set. “Instead, I got a Leap Year – it’s almost just as good,” he continued. In another breeding, “I was trying to get a Sun dragon, and I got a Blue Moon instead – just as good.”

As with purebred dogs, different dragons appeal to different breeders. But, unlike dog breeders, DragonVale fanciers can “Fountain of Youth” their breeding stock. This makes dragons look like newly hatched babies again, though they retain whatever level they have achieved, and can still be bred. Dragons don’t die, or reach an age where they can no longer produce: They are an endless stream of electronic possibility.

In DragonVale, the game tells you if your two breeding prospects are “incompatible”: It simply won’t let you do the breeding. Would that the great software developer in the sky would do the same, so we aren’t faced with heartbreaking app crashes in the whelping box.

Marinate in that thought for a while: What would your breeding program be like if you weren’t constrained by a biological clock? (At least as far as bitches go: With enough money and liquid nitrogen, many stud dogs can achieve a fair degree of immortality.) What if we could do as many combinations we liked, to see what worked? I’d settle for a simple warning system: In DragonVale, the game tells you if your two breeding prospects are “incompatible”: It simply won’t let you do the breeding. Would that the great software developer in the sky would do the same, so we aren’t faced with heartbreaking app crashes in the whelping box.

Back to DragonVale’s Ponce de Leon feature: the ability to juvenilize a mature dragon. In dogs, we do this by breeding for “neotenic” features – short muzzles, large eyes and floppy ears – that retain the physical trappings of puppyhood, which, of course, is the appeal of the Toy breeds, and some of the mini-Molossers. Stephen doesn’t know about this very human tendency to gravitate toward the physical features that remind us of babies. But he sees it at play among DragonVale breeders, including himself.

“Some people don’t want their dragon to be very big,” he explained. “I don’t, because they look ugly. I like them when they’re little because they’re so cute.”

The apex of a DragonVale breeder’s career – and the goal Stephen is striving toward – is to breed a gemstone dragon. These high-level dragons are rare. They produce gemstones, not mere coins, which can be spent to help speed up the time a breeding or hatching takes, purchase other gemstone dragons, unlock breeding hints, or buy new dragon habitats and pedestals for hatching eggs.

“I don’t have a gemstone dragon, but I want to breed one,” Stephen explained earnestly. “Which is why I’m trying to produce a Frostfire. If you breed a Frostfire to an Ash” – which he had already bred by crossing two of his elemental dragons, Plant and Lightning – “you get a gemstone dragon called a Jet Dragon, and that’s worth 1,500 gems.”

As in dogs, DragonVale has its shortcuts. If you rely solely on the non-gemstone dragons to produce coins, it can take a very long time to generate enough to buy a gemstone dragon, if you can do it at all. If you can’t breed it, the quick fix is to just buy it. Enter the backer – another familiar concept – which in DragonVale terms is me.

When Stephen first downloaded the DragonVale app, I gave him some seed money to buy a breeding island and some starter dragons. Now, with a few swipes of my iTunes account – and a $30 charge on my Amex – I could buy Stephen any of the gemstone dragons he so covets. But where is the fun – or the satisfaction – in that? You want a superstar, and the joy of having it on the end of your leash – or, in this case, on your floating, electronic dragon island? Then you’re going to have to do it on your own.

“Please, Mom, can you buy me some more gems?” Stephen pleaded.

“You want a gemstone dragon, you breed one,” I replied.

Six days from whelping to stud book? No dinging with retained testicles, bad bites, unwelcome OFA results, infertility, or any of the other calamities that can befall our newly hatched prospects as they grow and mature in real time? He wasn’t getting any sympathy – or any cash – from me. But, like any good mentor, I gave him sound advice: Keep striving to learn more, visit DragonVale blogs for more tips and download a free app that reveals “cheats” on how to progress more rapidly in the game.

The other advice I had for him he already knew, a piece of schoolyard wisdom that every breeder should take to heart.

“This game is about waiting,” Stephen sighed. “You get what you get, and you don’t get upset.” Then he turned back to the Kindle screen, where the prospect of the next Great One was percolating inside the breeding cave, pink hearts at the ready.

© Modern Molosser Magazine. This article may not be reposted, reprinted, rewritten, excerpted or otherwise duplicated in any medium without the express written permission of the publisher.
Thu, 06/09/2016 - 9:21am