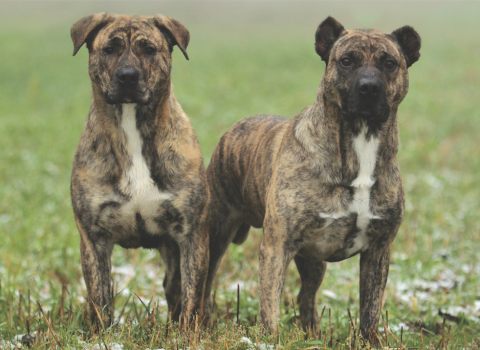 As with many breeds, the exact origins of South America’s Cimarrón Uruguayo are uncertain. But what we know for sure is that the breed arose from random crossbreeding.

When the Spanish and Portuguese colonized Uruguay in the 1600s, they brought their dogs with them. Released or abandoned in the countryside, these dogs bred among themselves, and natural selection soon ensured that only the fittest, strongest and most intelligent individuals survived. This is how the Cimarrón earned its name, which means “feral.”

The dogs became very well adapted to the surroundings, and, with plenty of food, bred in great numbers. But they also became a real danger to livestock and even people, according to some historical documents, with tens of thousands reportedly roaming the country. By the end of the 18th Century, the government paid a bounty for each dog that was killed. In spite of this sanctioned culling, populations of the dogs persisted, particularly in the Cerro Largo province in the east of the country, bordering Brazil.

Traditionally, the Cimarrón has a cropped ear. A litter of Cimarrón Uruguayo puppies. The breed is very rare in the United States, which is home to fewer than a half-dozen.

Many farmers in the Cerro Largo area, recognizing the value of these dogs, domesticated the Cimarróns and progressively began to use them as herding dogs in their daily work with cattle. The farmers also started to breed them selectively. The Cimarrón is a medium-size dog.

In 1969, the Cimarrón Uruguayo was shown for the first time at a dog show organized by the Kennel Club of Uruguay. Twenty years later, that national kennel club officially recognized the Cimarrón Uruguayo, and along with a Cimarrón breeders association, the kennel club helped draft the first standard of the breed. This started an important selection, registration and tattooing of foundation dogs and puppies, and today the Uruguayan kennel club has registered more than 4,500 Cimarróns. In 2007, the breed was provisionally recognized by the Fédération Cynologique Internationale, which categorizes it as a “Molossoid, Dogue type.”

In recent years, the breed has been developed thanks to the work of many enthusiasts and breeders, particularly in Uruguay, Argentina and Brazil. This national dog of Uruguay has also spread to Europe. The first Cimarron exported to Europe was a male, Pancho de la Fogueria, in 2008. In following spring he was joined by the bitch Faca de las Pitangas. Today, there are about 84 registered Cimarróns spread between in Sweden, France, Germany, Finland, Hungary, the Czech Republic, the Netherlands and Liechtenstein. We also know that at least five have been imported to the United States. Athleticism is a byword for this breed.

The Cimarrón Uruguayo is a balanced, intelligent, easily trained and lively dog. Suitable for herding, agility, obedience and tracking, the Cimarrón gives the impression of remarkable endurance because he can run cattle under harsh weather conditions. He is very devoted to his shepherd/owner and the cattle that he is charged to watch. He may be diffident toward strangers, not wanting to say hello directly. The Cimarrón was used for herding as well as guarding in its native Uruguay.
The breed has a short coat, with an undercoat, important for a working dog because it resists moisture. The breed’s medium size and longer than tall proportions are important in order to obtain a functional and agile working dog with harmonious movement.
Cimarrón movement should be effortless. An important part of the gait is that when speed increases, the dog single-tracks. This can be incorrectly interpreted as the dog being narrow in the rear, with movement that not parallel when viewed from behind, but this is not a fault; it is very typical of the breed.
Living with the Cimarrón gives me so much joy, but these dogs need a lot of exercise; otherwise, they can easily give their owners some big – and not pleasant – surprises. In the end, I think it is a matter of what kind of dog person you are: I know some people would get very frustrated if they came home to find their dogs on the dining table. But I can only smile, because this is how they are as a breed. Cimarróns loves to be high up and scout. Life with them, I can tell you, is far from boring! Jessica Snäcka lives on a small farm in Hörby in the south of Sweden. Originally a breeder of Dogo Argentinos, she now concentrates on Cimarrón Uruguayos, which, she says, “have stolen my heart.” Her Kennel, Perro Caracteristico, was the first in Europe to import and breed the Cimarrón, and in 2012 she was honored to be asked to judge the breed in its native land.
© Modern Molosser Magazine. This article may not be reposted, reprinted, rewritten, excerpted or otherwise duplicated in any medium without the express written permission of the publisher.
Sun, 09/06/2015 - 10:20pm