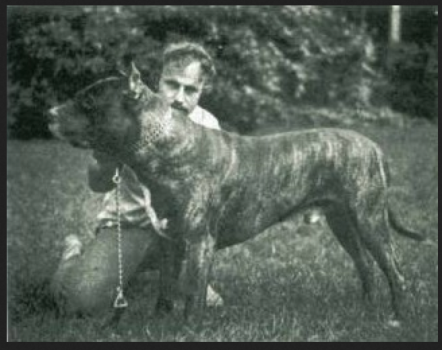 Swinford with the original Bantu.

Let’s rewind five centuries or so, to Tudor England. Shakespeare was writing his plays, the plague was making the rounds, and the severed heads of criminals were a common sight on the London bridge.

Watching the goings-on from their tethers in farmyards and alleyways were bandogs, literally named for the fact that they were chained up, or banded, during the daytime, and then left to roam and guard at night.

In his description of England written in 1586, William Harrison described the bandog as “a huge dog, stubborn, uglier, eager, burthenouse of bodie, terrible and fearful to behold and often more fierce and fell than any Archadian or Corsican cur ...” Ten years earlier, Dr. Caius described a dog that was “serviceable against the fox and the badger, to drive wild and tame swine out of meadows, and pastures, to bite and take the bull by the ears, when occasion so required.” John Bayard Swinford, the father of the modern Bandog.

Over the centuries, the Bandog receded into the mists of history, a relic of less complicated and more brutal times than the ones in which we live now. In the latter part of the 19th Century, Victorian gamekeepers created their own version of the Bandog, which later evolved into a bona-fide breed – the Bullmastiff. And then, in the late 1960s and early ’70s, Long Island veterinarian John Bayard Swinford undertook a breeding program that sought to replicate these original working mastiffs of the Middle Ages.

Swinford’s work with the Bandog – later, more evocatively spelled Bandogge – might have never risen above obscurity were it not for author Carl Semencic, who included Swinford in his influential book “The World of Fighting Dogs” – something of an awkward fit, as the Bandogges were primarily created for protection, not bloodsport.

Fellow Long Islander Martin Lieberman met Swinford at the end of the 1960s. At the time Lieberman had Bull Terriers, but was growing disenchanted with them for their lack of drive, and was contemplating doing a Rottweiler/pitbull cross. Barbara Ieda, a Bull Terrier owner who also bred Mastiffs, introduced him to Swinford, whose breeding program was already underway. Lieberman abandoned his Rottweiler plans – he says that breed was never used by Swinford, and neither were Tosa Inus, no matter what the articles on the Internet say – and began collaborating with Swinford.

In that cross, the pitbull blood contributed the athleticism that the Mastiff needed, as well as longevity: Lieberman says all the Swinford Bandogges lived well into their teens, something he attributes to the strenuous selection among serious breeders of fighting pitbulls: “They breed the strongest to the strongest, and they’re very parochial about that.” Despite their handier size, the Bandogges were “just a lot of dog,” Lieberman says. “These dogs were naturally suspicious, which a pit bull is not – they’re basically mushes. But the Bandogges had natural suspicion, and the drive to back it up.”

Cocker Spaniel breeder Bill Gorodner had just graduated college and opened a grooming shop in Manhattan when he met Swinford in the early 1960s. At the world-famous Westminster dog show, Gorodner met a wildly colorful Poodle breeder, groomer and boarding-kennel owner named Olive Caplette. The veterinarian she used for both her Poodles and the dogs she boarded was Swinford, who worked at the ASPCA in Manhattan. (Though he had severely limited vision in one eye, Swinford nonetheless managed to compensate for it with his other eye to perform surgeries.)

A compulsive smoker who did not hesitate to proffer veterinary help if it was needed, even if the prospect of compensation was slim, Swinford also had his own exotics practice, specializing in birds of prey. Gorodner remembers that Swinford gave Caplette two wooley monkeys he had rescued, and they became the official greeters at the grooming shop. “The little one named Puck used to pee on every woman who came in wearing a fur coat,” Gorodner recalls gleefully.

At the time, Caplette was working with her sister Anna on their eponymous line of Toy Poodles. While Gorodner says Swinford wasn’t part of the breeding program, he did help them accomplish breedings, and would go to dog shows with Gorodner where the Caplettes’ dogs were being shown.

“In those days Toy Poodles were evolving, and we would talk about how to get them taller by using Miniature Poodles,” Gorodner says. “He knew about that, and was fascinated by all of it.” And it was information that likely stood Swinford in good stead later in the decade, when he began breeding his own scaled-down version of the Mastiff.

Gorodner visited Swinford at his home in tony Muttontown, Long Island – by all accounts Swinford was well off, despite his unassuming appearance – when the first litter of Bandogges was four months old. Gorodner remembers that there were six puppies, an assortment of fawns and brindles, and Swinford had kept them all.

Such a cross breeding was unorthodox, especially for that time, Gorodner admits. “But John did his own thing. He marched to his own piper. It was just a dream he had. And he was so excited about creating this particular type of dog.” While the Bandogges bore a strong resemblance to a modern-day Cane Corso, Gorodner says form was less of an issue for Swinford than function: “It was the temperament and size that he was looking to have.” Lieberman knew all of Swinford’s foundation dogs, including the famous brindle Bantu, who was out of the first-ever litter, but later met an untimely end after being hit by a car, as well as his son, the appropriately named Bantu 2.

As Swinford’s breeding program progressed, an infusion of new blood was in order. Swinford and Lieberman called on Luigi Forina in East New York, Brooklyn, who spoke no English, and relied on his son-in-law as an interpreter. Forina owned “Italian Bull Dogs,” later known as Neapolitan Mastiffs.

“Forina had a wine grapes growing all over his backyard, and he had Neos, and he also had an English Mastiff or two,” Lieberman recalls. “He had the best wine, and when you left there after doing a breeding, you left cockeyed.”

Bantu 2’s sisters were crossed with Forini’s stud dog – Lieberman recalls the Neo weighed 240 pounds, “and the dog was not fat” – giving the Swinford dogs the hybrid vigor he and Swinford were seeking.

A favorite Bandogge bitch that resulted from the Neo crosses was “Chui,” which means “leopard” in Swahili. “And she looked exactly like a black leopard, with a very long tail and a soft, shiny, jet-black coat that felt like silk when you touched it,” says Lieberman, who had legitimate basis for comparison: For his 27th birthday, Swinford handed Lieberman a Waldbaum’s shopping bag. Inside was a 4-week-old jaguar cub.

Lieberman says Swinford asked him to pen the standard for the Swinford Bandogge, and he happily complied. In a effort to keep Neo-induced hypertype at bay, tight eyes were very important – drooping lids were a no-no. Keeping size in check was also a priority, with ideal dogs weighing about 100 pounds and standing 25 inches at the withers. Dark colors were preferred, and brindles were acceptable. “Knowing what I know now, I would have never cropped the ears. I would have been happy with a rose or drop ear,” Lieberman says. “But in those days, that was the look that people wanted.”

Then, suddenly and unexpectedly, some three years after Lieberman met him, Swinford died. He was 37.

Lieberman carried on the bloodline, but eventually stopped breeding in the mid-1970s, after about six generations, leaving no dogs to carry the line forward. The catalyst for Lieberman was losing a litter of 21 puppies out of a Neapolitan bitch who had been bred to a Bandogge, but in truth he had been growing weary with buyers. “It’s very hard to find people who are responsible,” he says. “The cockroaches were coming out of every nook and cranny. And most were not noble in purpose.”

As for the dogs, Lieberman says they had nobility in spades. While the goal was to produce a dog that was, in Lieberman’s words, “an extremely athletic dog that feared nothing made of flesh,” he thinks Swinford’s greatest legacy was in producing a dog that was as stable as it was formidable. “A child could run up and hug them, and they’d wag their tails,” he says. “All these dogs were great with kids, and they all had to co-exist with each other. In that regard, I think he accomplished a lot.”

Lieberman acknowledges that a dog with as strong a drive and guard instinct as Swinford’s is arguably no longer compatible with modern American society. “Those were different times,” he sighs. “You couldn’t have a dog like that today.”

Yet-another Long Islander, Ruth Winston – a familiar name to Mastiff fanciers, as she and her husband Jay were associated with Tobin Jackson’s famous Deer Run kennel – can attest to what a loyal companion the bandog was. She owned a brindle bitch named Samantha who sired by Lieberman’s Hustle of Jamaica in the late 1970s. Winston found Samantha through an ad in the New York Times, and calls her the smartest dog she ever knew. “She could literally speak,” Winston says, adding that Samantha would call her “Mama.” “She would say ‘out’ when she wanted to go out, and ‘up’ when she wanted to get on the bed. My mother would invite her friends over just so they could see her.”

Though Winston said her Bandog was gentle and affectionate, Liebermann warns that, like any large, determined guardian breed, the Bandog is not for everyone. “The average person should not own a Swinford Bandogge!” he says emphastically, adding that prospective owners should be experienced in handling serious dogs and should not live in a congested area. Swinford, who specialized in exotics, with some slithery clients. Photo courtesy Martin Lieberman.
Though Swinford left no bloodline, his historically inspired recreation of the Bandogge has prompted others to try and emulate it. Lieberman notes that rather than focusing on their breeding programs, most Bandogge breeders are more inclined to scrap among themselves over whose dogs are better, and which crosses are more effective.
In sharing their memories, those who knew Swinford hope to provide a sliver of insight into the gentlemanly, self-effacing founder of the Bandogge to those who would aspire to pick up the torch.
“He was just somebody splendid to know,” Gorodner says. “He had a dream, and he put at least the beginnings of it together.”
And Lieberman says he is pleased to see that others have taken up the torch, more than four decades after Swinford passed and Lieberman decided to allow the original line die out. “I have to say it’s very satisfying, and I never thought it would happen,” Lieberman says of the steady growth of bandog breeders all over the world. Swinford’s dream, it appears, is alive and well.
© Modern Molosser Magazine. This article may not be reposted, reprinted, rewritten, excerpted or otherwise duplicated in any medium without the express written permission of the publisher.
Wed, 03/01/2017 - 7:43pm