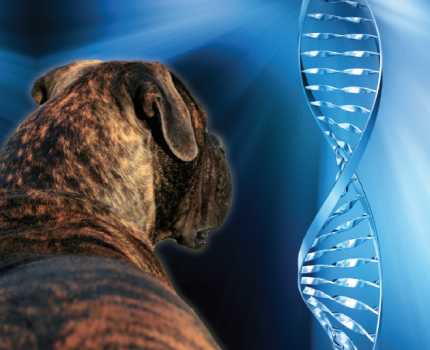 Show Me Your Genes

The inheritance of brindle in the Bullmastiff
By
Chris Lezotte
When talking with other Bullmastiff breeders, both experienced and relatively new, I am always surprised to discover that many are unaware of how brindle is inherited.
While science was not my best subject in school, the one topic that piqued my interest was genetics. And although I studied the subject well over 40 years ago, the basic principles of Mendelian genetics remain with me to this day. Through an understanding of Mendel’s theory of “complete dominance,” as well as observations in my own breeding program over the past 25 years, I have developed my own theory of how brindle is inherited, which has yet to be disproven. It is a pretty simple theory, and hopefully all Bullmastiff breeders, including those who, like me, are not scientifically inclined, will understand it and be able to apply it to their own breeding programs. 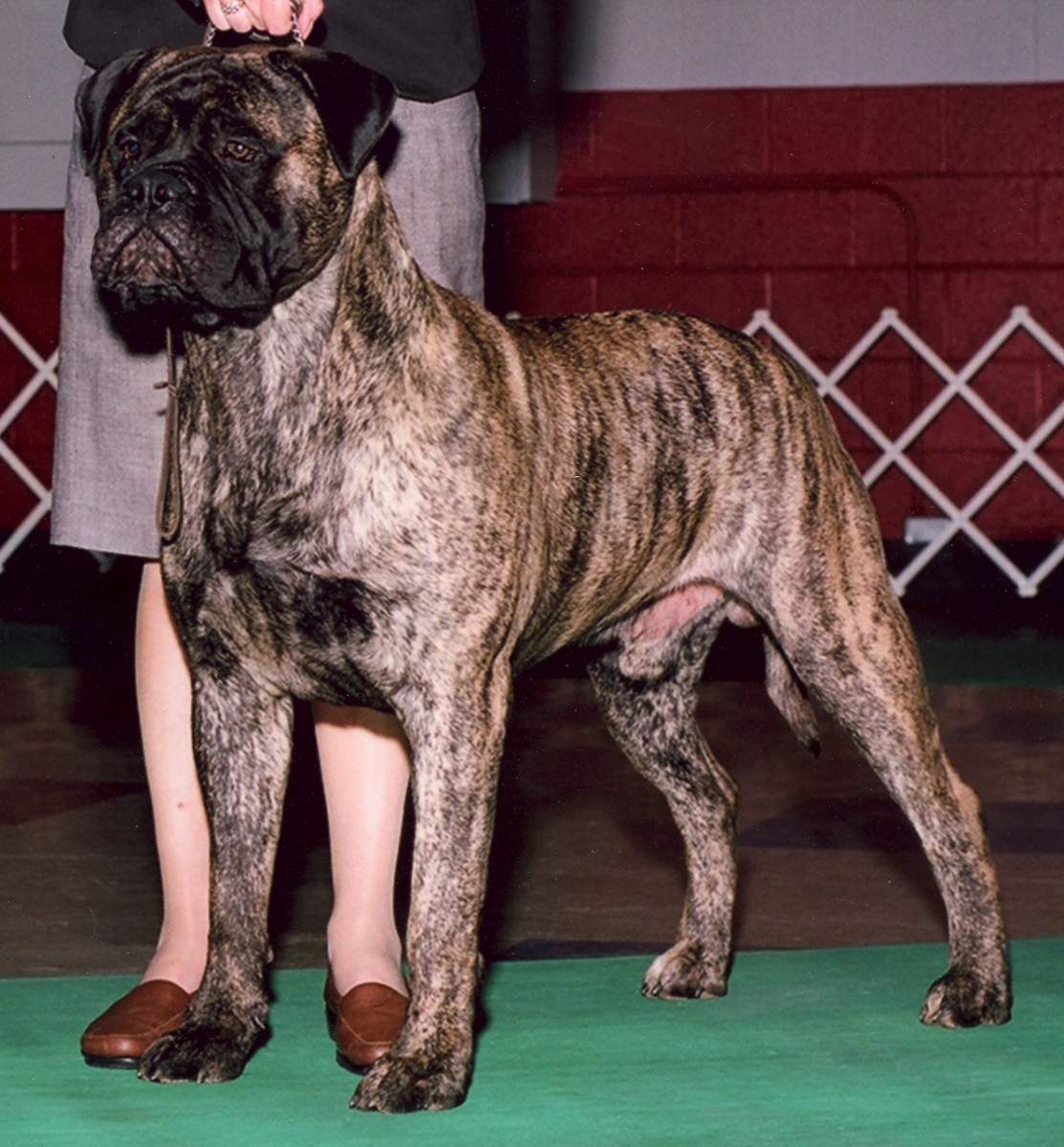 Mendel’s law of complete dominance is applicable to those traits that are determined by two genes, one inherited from each parent. The gene for brindle falls into this category. When bred, each Bullmastiff provides one gene (either brindle or non-brindle) to each of its offspring. In the law of complete dominance, genes are either dominant or recessive. The dominant gene, when present, is always expressed, and will mask the recessive gene. Thus a dominant gene paired with a recessive gene will always express the dominant. The only way a recessive gene can be expressed is in the absence of a dominant – that is, is if it is paired with another recessive gene.
An easy way to illustrate this point is through a basic algebraic equation. (I wasn’t good at math either, so this will be very simple.) The gene for brindle is dominant and is symbolized by a capital “B.” The non-brindle gene is recessive and is symbolized by a lowercase “n.” There are only three possibilities for the two genes to pair up: BB, Bn and nn. This is known as the genotype. The genotype, or pairing of genes, is what you can’t see.
Based on what we know about the expression of dominant genes, the genotype will determine whether or not the dog is brindle. The observable expression of the genotype is the phenotype. The phenotype, or in this case the physical appearance, is what you can see. Thus dogs with the genotype of BB and Bn have the phenotype of brindle (i.e. they are brindle); those whose genotype is nn do not. BB only carries the brindle gene; Bn carries both the brindle and non-brindle gene (the non-brindle gene is masked by the dominant gene); nn only carries the non-brindle gene.
Are you with me thus far? I hope so.

Let’s say you have a brindle dog with the genotype of Bn and you are breeding him to a fawn bitch (nn). The equation for this is Bn x nn. So what do you get? Bn x nn = Bn + Bn + nn + nn, or 2Bn + 2nn. Theoretically, half of the litter will be brindle (Bn), and half will not (nn). Another way to demonstrate this phenomenon is through a Punnett square, or genetic checkerboard, pictured below.
The letters above the square represent the genes from one parent, and the letters on the left represent those from the other parent. Capital letters indicate dominant genes and lowercase letters indicate recessive genes.
B = dominant gene for brindle
n = recessive gene for non-brindle 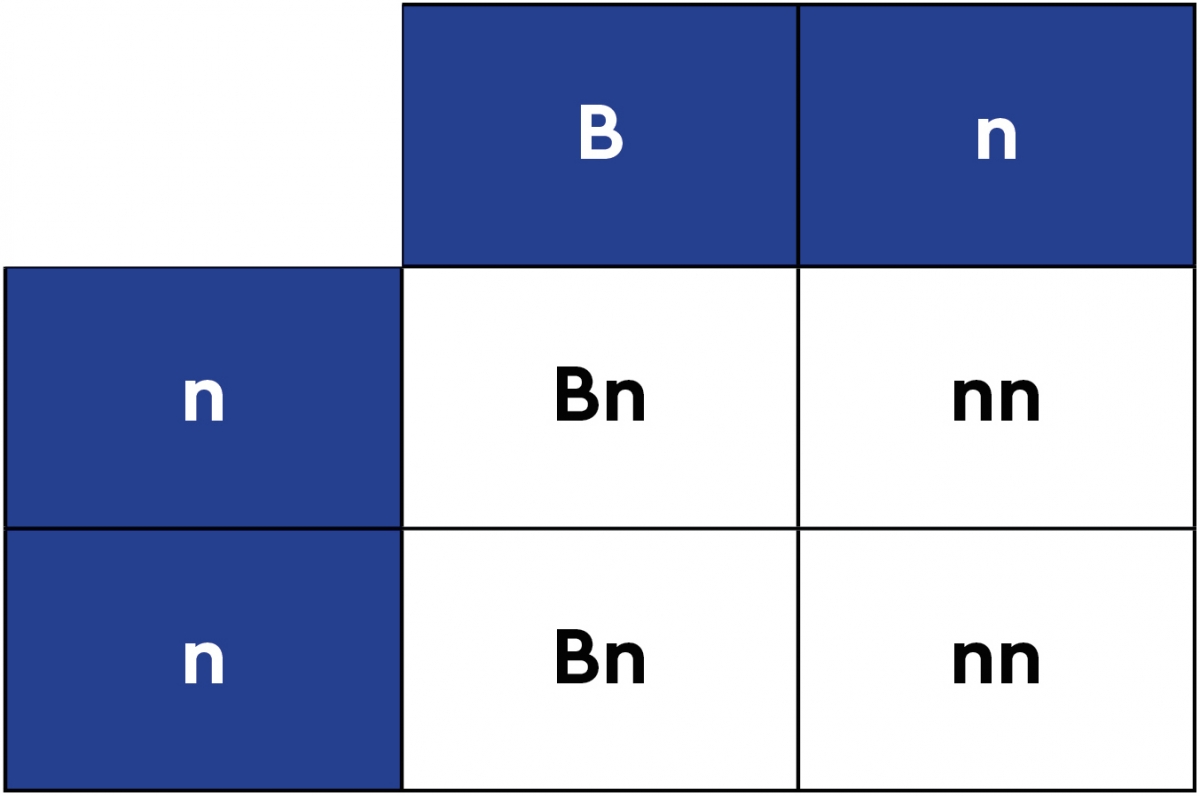 50 percent brindle (Bn) + 50 percent non-brindle (nn)
Now what happens when you breed two brindles together? Let’s say both have a genotype of Bn. Bn x Bn = BB + 2 Bn + nn. Since B (brindle) is dominant, 75 percent of the puppies (BB + 2Bn) will be brindle in phenotype and 25 percent (nn) will not. Here’s the checkerboard again: 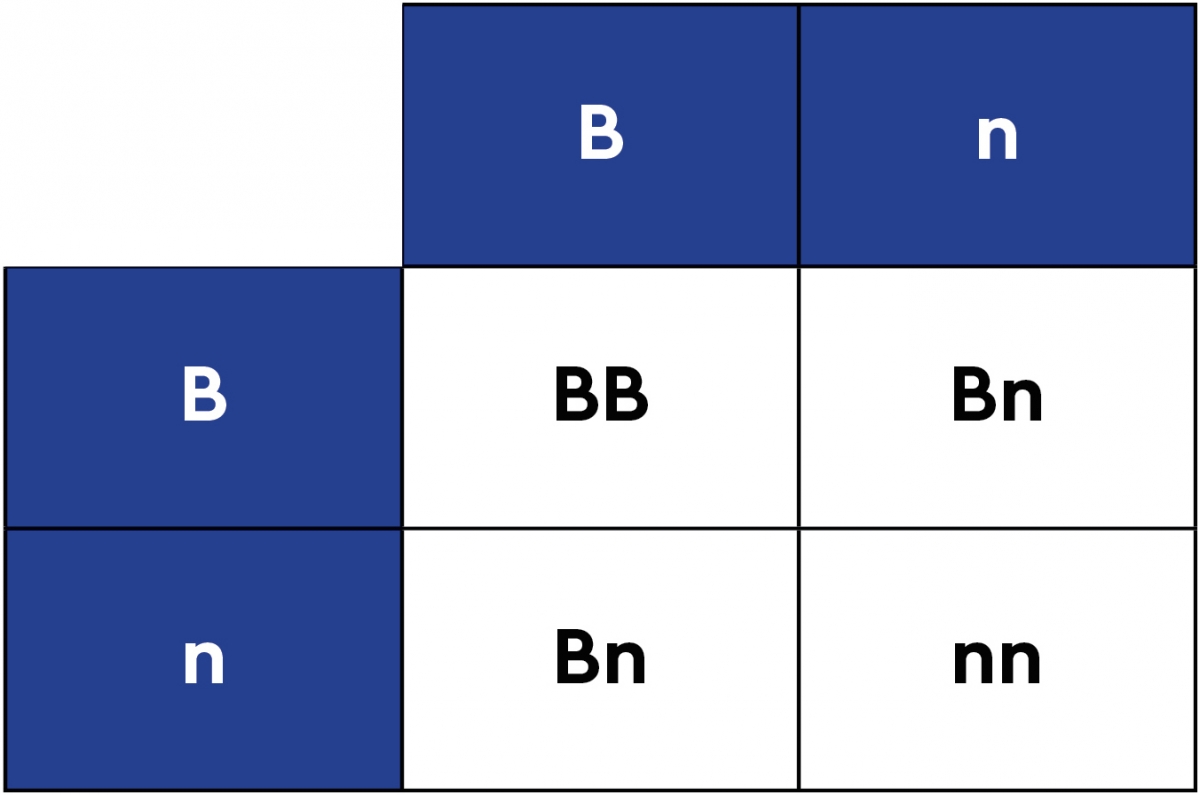 In Bullmastiff circles, we often hear the expression “dominant for brindle.” This phrase is usually used incorrectly, as all brindles produce brindles since B is a dominant gene. What breeders are usually referring to, however, is a dog (or bitch) that can only produce brindle. A dog that produces only brindle does not carry the non-brindle gene (n). Since dogs receive one pattern gene from each parent, a brindle that only throws brindle is the product of two brindle parents. A brindle that can only throw brindle, therefore, is BB.
To see how this works, I’ll show what happens when a dog that carries two brindle genes (BB) is bred to a non-brindle (nn). BB x nn = 4Bn. All puppies (100 percent) will be brindle.
Back to the checkerboard: 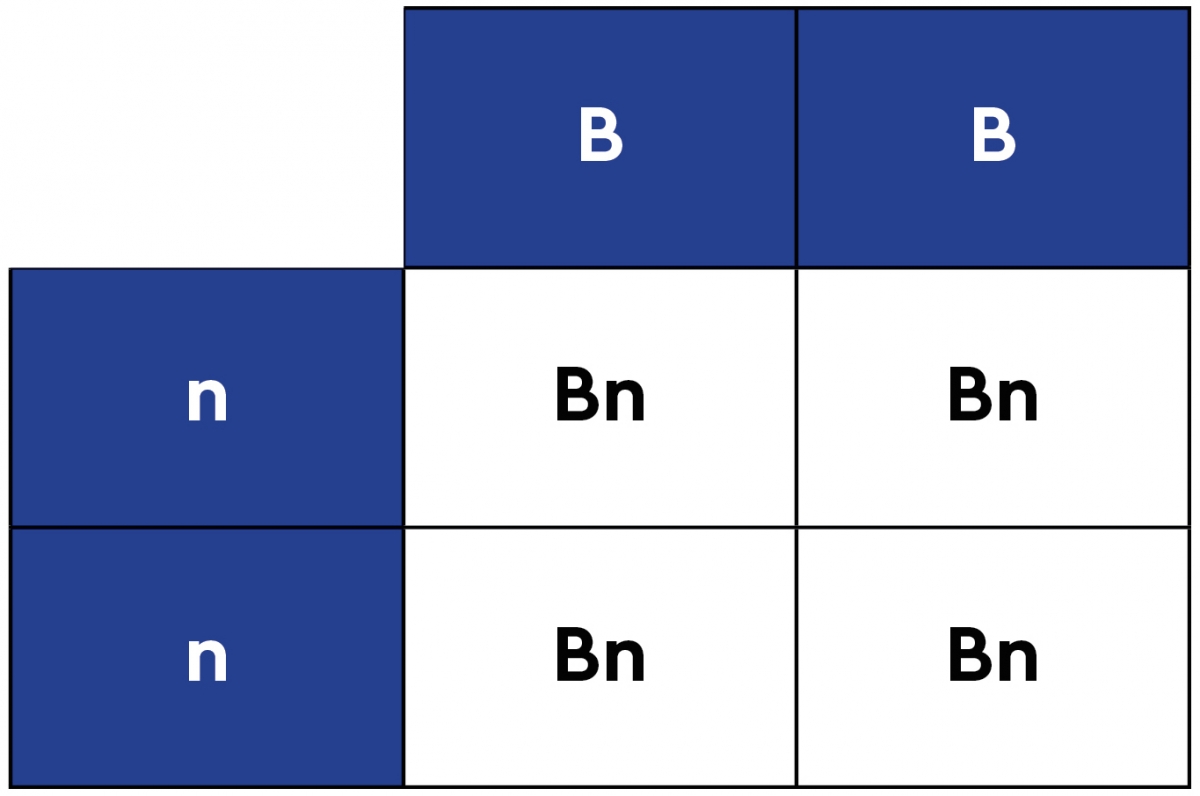 100% Bn  = 100% brindle
The same is true if a dog carrying two brindle genes is bred to another brindle. 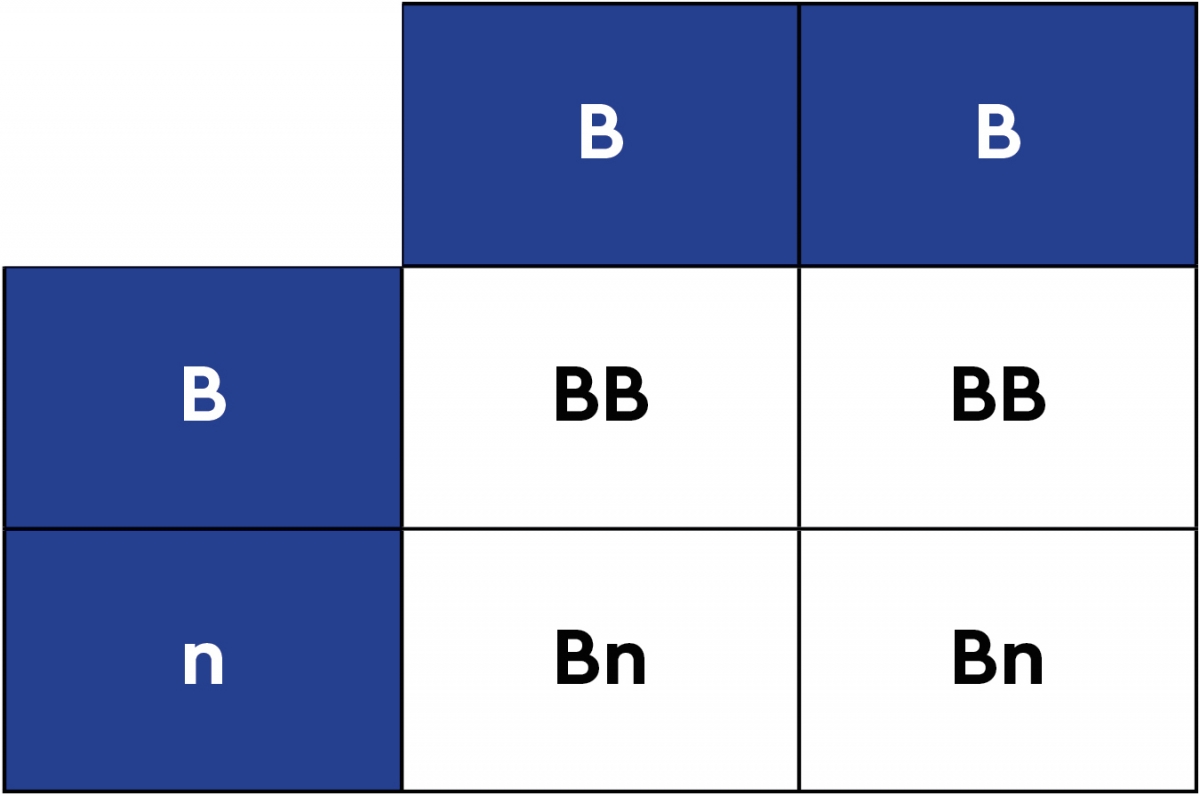 50% Bn + 50% BB = 100% brindle.
Of course, since a dominant brindle gene will mask the other, the only way you will know if a dog is BB or Bn is by what he or she produces. When a brindle dog is bred, if there are any non-brindle pups in the litter, then the brindle parent is Bn. If all the pups are brindle, you can be fairly certain (but not absolutely) that the brindle dog is BB. Remember that a dog that only produces brindle must have both a brindle sire and dam, as both parents had to contribute the brindle gene (BB). Conversely, a dog with both a brindle and non-brindle parent will not produce only brindles as it carries the non-brindle gene (Bn).

Not All Genes Act the Same

The Mendel law of dominance is not absolute, for there are many traits in Bullmastiffs that are influenced by a combination or number of genes. However, the pattern gene is an example of complete dominance; thus its inheritance in the Bullmastiff is more easily understood. Another example of complete dominance in the Bullmastiff is the dudley, which is a product of two recessive genes. However, in order to avoid any more confusion, I’ll leave the subject of the inheritance of dudleyism to another article.
For additional information on canine genetics, I highly recommend “Genetics: An Introduction for Dog Breeders” by Jackie Isabell.
© Modern Molosser Magazine. This article may not be reposted, reprinted, rewritten, excerpted or otherwise duplicated in any medium without the express written permission of the publisher.
Thu, 04/05/2018 - 7:45am