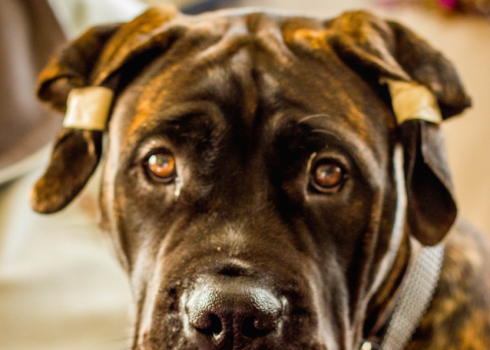 Chances are, if she had it to do over again, Sally Field wouldn’t star in the famously fruity 1960s sitcom “The Flying Nun.”

“I always certainly tried to do my best with it, but deeply didn’t want to do it,” she told an interviewer in 2004 about the campy show starring a lightweight nun whose origami-like cornette made her airborne. “It made no sense to me. It was just drivel.”

Despite Field’s misgivings, the show has at least one redeeming value, however dubious: Among dog lovers, Sister Bertrille’s flight-inducing headgear is now the nickname for a very persistent problem that can strike some drop-eared Molosser puppies. Sally Field as “The Flying Nun.”

“Flying nun ears” usually appear at four to six months, around the same time the puppy begins teething. Instead of lying flat and tight against the head, the ears become creased and bent, sometimes rosing like that of a Whippet, or lifting at the corners, like the button ears of a Terrier.   Molossers with V-shaped ears, including Boerboels, Dogo Argentinos, Cane Corsos and Rottweilers, can experience flying-nun ears. But, based on the amount of discussion on Internet forums and blogs, Bullmastiffs seem to experience more than their fair share of it.

“The cause, I guess, is in the genes, especially from the Bulldog,” where a rose ear – folding inwards at the back – is required, says Hilde Kjeldby of Old Manila Bullmastiffs in Norway. (Ironically, to correct plain, V-shaped ears in their puppies, Bulldoggers glue them with eyelash adhesive to create the very ear Bullmastiff breeders try to avoid.) She notes that flying-nun syndrome can occur in all types of ears, but in different ways. “The big, thin ears tend to fold vertically, and the small ears tend to rise up,” especially at the junction where the corner of the ear meets the head.” “The small and thick ears are more difficult to correct,” Kjeldby continues. “The development has something to do with teething, I think, since it is not so possible to correct them after they are done teething.” Like Kjeldby, most breeders agree that Bullmastiff ears start misbehaving at around four to five months of age, when the puppy’s adult teeth begin to appear. A popular theory is that the body utilizes a great deal of calcium at this stage of development, and begins to draw it from the cartilage in the ears as well as the feet. (Flattened feet and pasterns are typically also seen with flying-nun ears.)

To be sure, flying-nun ears do not compromise a dog’s healthy or longevity: They are a purely aesthetic problem. But the ears are the finishing touch to the head, and if creased ears are left unattended into young adulthood, the cartilage will harden in place and stay that way.

“Some puppies need to have their ears taped, and some don’t, but I think a correct ear is very, very important,” says breeder-judge Helene Nietsch of Banstock Bullmastiffs in Newtown, Connecticut. “It really sets off the squareness of the head in a Bullmastiff.”

“Flying nun ears – I hate ’em!” agrees second-generation Bullmastiff breeder Pat O’Brien of Bullmast Bullmastiffs in Fullerton, California. “I watch the pups carefully, and if I see them continuously folding back, I will tape them. I recently received pictures of a boy from my last litter, and my initial response was ‘Get out the tape immediately.’”

O’Brien uses the “bonnet” method to persuade her Bullmastiff puppies’ ears to abandon their crinkled ways. While there are different variations – some breeders, for example, use duct tape, while O’Brien prefers surgical tape – the basic premise is the same: A strip of tape is secured to the underside of each ear, with extra allowed to dangle below the tip. Then the extra sticky tape is carefully run under the chin, and attached to the underside of the other ear.

“You want it so the ears are really, really pulled down,” Nietsch stresses, resulting in a puppy that looks like it is wearing a bonnet drawn tightly to its head. “You want to break down the cartilage at the top of the head,” where the ear meets the side of the head. To ensure that the tape attaches securely, the underside of the ear flap should be cleaned thoroughly with rubbing alcohol and then allowed to air-dry completely.

A good taping job can last a week or longer, but Nietsch says she leaves her taped for a maximum of two days, out of concern that the restricted air flow can trigger ear infections.   “Sometimes, two days is good enough – sometimes all it takes is once,” she says. “And in other cases, I’ve had ears where I’ve had to tape for months.”  But the window of opportunity doesn’t stay open indefinitely: “The point of no return is a year,” Nietsch says. Mary Hanigan of Bulhaven Bullmastiffs has a popular blog that outlines how to tape Bullmastiff ears. Above is her puppy Furgie, whose right ear is starting to act up. Hanigan uses two pieces of tape on each ear, then tapes the ends together to create a bonnet-style taping. Some breeders, acknowledging that there may be genetic differences between American and European Bullmastiffs in this regard, say the clock stops ticking much sooner for them: Kjeldby of Norway has found that ears can be corrected only during the teething period – up to six or seven months of age. After that, she says, “the cartilage will become hard and impossible to work with.”

Kjeldby prefers to start out with as minimal an approach as possible. Her first intervention is simply massage, rubbing and kneading the cartilage to make it more pliant. “I try to massage the ears from the moment I see them starting to ‘misbehave,’ and often that is enough if done every day,” she says. “It’s part of cuddling time, and my favorite method by far.”

If that doesn’t work, Kjeldby will move on to another taping method. Called “felt to felt,” it involves rolling the sides of the ear toward each other so they touch, like a taco, and securing them in this position with a band of tape in the middle of the ear. The final effect resembles swagged drapes on either side of the puppy’s head. “That makes it more airy for the ear,” she explains, “and there is less chance of infection.”

But, Kjeldby notes, the taping method she chooses depends on what part of the ear is affected: If the leather is just crinkling, then felt-to-felt might be the best approach, while an ear that is lifting at the corner might benefit more from a bonnet-type taping. Bullmastiffs are hardly the only Molosser breed where fly-away ears are a problem. This Dogo Argentino puppy is a prime example.
Then there are those breeders who choose to do absolutely nothing at all. Benign indifference is the approach taken by Carol Beans of Tauralan Bullmastiffs in Santa Ana, California.
“In my half-century with Bullmastiffs, the percentage of dogs that would really benefit from ear-taping is extremely small,” she says. “One of the reasons I don’t like taping is that, for those dogs, it hides a genetic factor that needs to be changed by not constantly breeding dogs with the problem of too small ears or poor ear placement.”
Beans agrees that ears go wonky during the teething period from four to 11 months of age, but she attributes it to pain from teething, which causes muscle and tendon tension on the sides of the face that in turn pulls the ear placement into improper position. “That is also the age of development when the modeling of the skull is changing,” she reminds. “The back skull is narrower, with the occipital bone being more prominent. This deprives the ears of support of proper placement, and folding can occur.”
Beans says that as the back skull continues widen and the pain from teething recedes, the ears return to their normal shape and position.
Unless you are taking a hands-off approach like Beans, all breeders pretty much agree that, when it comes to intervening with those Sally Field ears, the earlier the better: Ears that are taped at four months will take their desired shape in far less time than ears that aren’t addressed until several months later.
© Modern Molosser Magazine. This article may not be reposted, reprinted, rewritten, excerpted or otherwise duplicated in any medium without the express written permission of the publisher.
Wed, 03/23/2016 - 6:24pm