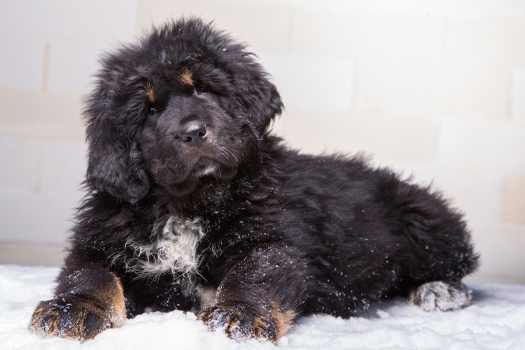 On October 28, the Internationale Klub für Tibetische Hunderassen, or KTR, the German club for the Tibetan breeds, held the first Do Khyi World Congress in Westonnen, Germany, drawing 58 delegates.

A desire to foster international discussion, coupled with current debates in the breed and dramatic changes taking place in China, prompted the decision to arrange the Congress. In addition, a judges’ workshop was organized to stimulate discussion over the current FCI breed standard.

Attending the Congress as observers were Liu Jinpeng, general secretary of the China Kennel Union, and a colleague who acted as translator. In a major development in the breed, the China Kennel Union was granted full FCI membership in July 2011, and patronage for the Do Khyi and other Tibetan breeds will revert to it. This has led to speculation that the Chinese kennel club will wish to move the breed in the direction of the more mastiff-like variety currently being produced by Chinese breeders. And some have suggested that the breed be split, into the larger Zang Ao being promulgated in China today, and the more moderate Do Khyi reflected in the current FCI standard.

Jinpeng had indicated in a letter to KTR that his kennel club was very willing to have “extensive communication and cooperation with its lovers worldwide under the framework of the FCI.”

The congress was opened by KTR chairwoman Bettina Huemmler, who struck a note of personal responsibility among breeders. “If we do not learn to speak about the faults of our dogs – and all of our dogs have faults – the maintenance of the breed is difficult,” she said. “There are many examples of breeds that are changed by the breeders, with enormous impact on type, health and fitness. ... We all are the ones who are responsible for our own actions for the preservation of the breed.”

The first speaker, Josette Pilat of Les Milles Vallees kennels in France, spoke on the history of the Tibetan Mastiff in Europe. Pilat focused on a list of the dogs going back to 1972 that had been imported into Europe.   Next to take the floor was Primoz Peer from Slovenia’s Rombon kennels, who discussed today’s Do Khyi in its homeland of Tibet. Peer does not own Do Khyi, but is devoted to all the Tibetan breeds, and has judged them in Europe and as far afield as Australia.

Throughout his talk, Peer referred to the larger dogs he encountered in Tibet as Do Khyi, which is the name given to them by the nomads of central, southern and western Tibet. In eastern Tibet, these larger dogs are called Da Chee, but the meaning of both names is “dog on a chain.”

Peer took us through his five visits to Tibet over the last decade, sharing discussions with people he encountered during his travels.

Peer explained the differences he noticed in the various regions, noting that in western Tibet – Ngari – where the terrain is at its wildest, almost desert-like, there are fewer dogs; they were poorly nourished, except during the very short summer, when food is more plentiful. This contrasts with east Tibet – Kham and Amdo – which is the most fertile and culturally rich Tibetan province.

From talking to the nomads in all parts of Tibet, Peer was able to establish that Do Khyi today are not used for herding, nor for protecting the herds of sheep, goats and yaks when they are out in the pastures. He was told that a large flock could not be effectively protected against predators by two or three Do Khyi; instead, shepherds carry out that function. The main role of Do Khyi was protection of the nomads’ tents and flocks once they returned to the encampment. A number of mainly male Do Khyi were chained around the tents for most of the day. When it was time to relocate to the next good pasture, the dogs were let loose and followed the caravan until the new location was reached.

Peer also discussed the feeding of Do Khyi, indicating that they were mostly fed a meager diet of leftovers, mainly tsampa (roasted flour) and stew, as well as any bones or other things the nomads could not eat.

On the subject of color, Peer advised us that black and tan are most appreciated by the nomads. One reason for this is the spiritual connection with the tan dots above the eyes, which are thought of as “the eyes that never sleep.” Other colors are acceptable to the nomads, but are not thought to be especially rare or enviable. White would never be bred, for such a dog would not be easily distinguished from sheep. He did not see blue, or blue and tan dogs, in any great numbers.

Peer also touched on the temperaments of the Do Khyi he saw, finding them calm and rather reserved, though alert. They could appear fierce when chained around the tents or houses, especially when first approached. But they calmed down when handled by the property owner or even a child. By contrast, when loose dogs were encountered in the pastures or villages, they simply ran away, showing no aggression.

It was during Peer’s talk that the first mention was made of the Zang Ao and the type of dogs that can be seen on Chinese breeders’ website and are causing so much discussion worldwide. In Yushu in eastern Tibet and Lhasa, Peer visited two kennels that were breeding for the Chinese and tourist market, producing big dogs with heavy bone and much loose skin. The Lhasa breeders were also producing dogs for a dog market in Lhasa, where the dogs would mostly be sold to Chinese people. By contrast, there is a dog market in Yushu where Do Khyi type dogs are sold by Tibetans to Tibetans.

Following Peer’s talk, two more speakers were lined up for the morning session. But along with a number of other delegates, I was enticed away to hear Paul Stanton host a workshop on judging the Do Khyi.   Stanton has been judging Tibetan Mastiffs/Do Khyi since 1981 and has enjoyed a successful career in owning, showing and judging Tibetan breeds since 1969. Along with many others present, Stanton was concerned about acceptable colors and size. The reason why sable had been included as an acceptable color in the FCI standard was something of a mystery to him, as it had not been intended it should be there when the FCI standard was revised in 2004.

After lunch it was time for Wes McCrum of Kaltekhan Kennels in Northern Ireland to offer his thoughts on the current FCI standard. McCrum has owned Tibetan Mastiffs for 10 years. Every aspect of what a Do Khyi should look like was raised, and once again the type of dogs being bred in China and Taiwan came in for much comment and criticism. McCrum believes that the typical expression is being lost, and that breed type is being sacrificed for size. Everyone agreed that the Do Khyi is a large breed but not a giant one. Movement is also something McCrum found concerning, believing that the oft-discussed “light and elastic” gait is now less evident and is being replaced with a more ponderous rear action.

It was during McCrum’s turn on the floor that we were asked to vote on proposals that would be put to the FCI regarding sable coat color/marking and height. With regard to sable, the vote was whether it should remain in the FCI standard as an accepted color; whether it should remain but be declared as a “serious fault,” or whether it should be removed altogether, leaving the words “colors to be as pure as possible” to guide judges. On height, the vote was whether to insert a maximum height of 75 cm; include an ideal height (which it was suggested should be more than 15 percent of the minimum height) or allow the standard to remain as it is, with no maximum height. The result of neither vote was made known at the congress.

There was a show of hands on whether or not to accept former FCI vice president Christofer Habig’s proposal to divide the Zang Ao and the Do Khyi into two distinct breeds. This proposal was agreed on unanimously, and FCI will be notified of the decision.

As ever, time was insufficient to allow every matter of interest to Do Khyi fanciers to be aired, and health was not discussed due to lack of time. For this reason, it was evident that future such gatherings are imperative, and various suggestions were made as to where the second Do Khyi Congress could be held. No decision was made, but everyone agreed that the first Congress had led the way and that more should follow. The following day, the first of the two weekend dog shows was held at the same venue. The beautiful autumn weather allowed the Do Khyi to be judged outside in a good-sized ring. The Saturday Championship show celebrated the 10th anniversary of Tibet Dog Europe. The judge for the Do Khyi was Torbjorn Skaar of Sweden, a long-standing Tibetan-breeds judge. Skaar found his Best of Breed in the American-bred Sierras Yogananda, owned by Alexa Sutton of the U.K. 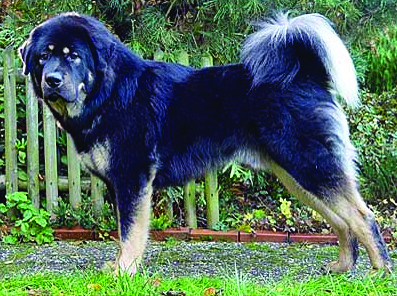 German-bred Ran’adzags Dzu-Tch took top honors on the second day of showing, under Llasa Apso specialist and judge Kerstin Handrich of Germany.
The KTR Championship club show was held on the following day, this time indoors. The Do Khyi were judged by Kerstin Handrich; her Best of Breed was Ch. Ran’adzags Dzu-Tch from the Veteran Class, owned by Adelheid Albrecht of Germany.
On neither day was a Do Khyi awarded Best in Show.
© Modern Molosser Magazine. This article may not be reposted, reprinted, rewritten, excerpted or otherwise duplicated in any medium without the express written permission of the publisher.
Sun, 08/07/2016 - 9:07pm