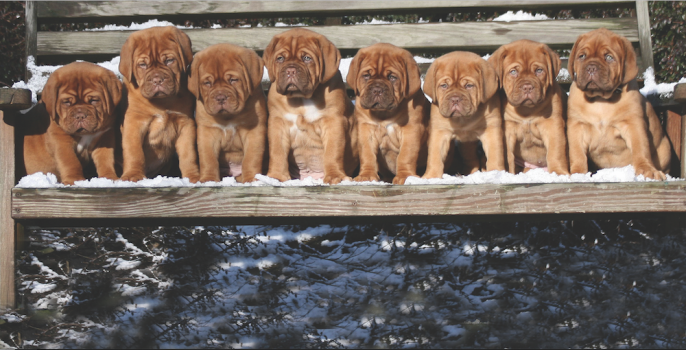 A seasoned Dogue de Bordeaux breeder contemplates the tricky task of puppy selection
By
Bonnie Gordon
The Dogue de Bordeaux standard describes a harmoniously built, powerful, muscular brachycephlic molossoid. Understanding these adjectives is one thing; understanding how they combine to show proper conformation is another.
It’s summed up in a single word: “balance.” The Dogue is an athlete. He was bred for hunting, guarding and fighting. He is unique among all other Working breeds, and his massive head and chest need a strong frame to present his past working abilities.
When I started to educate myself and learn about this breed, nearly 25 years ago, the singular term I heard most often from the older, well-established European breeders was balance. Simply put, it is proportions. These proportions are specifically written in our standard and are easily understood. 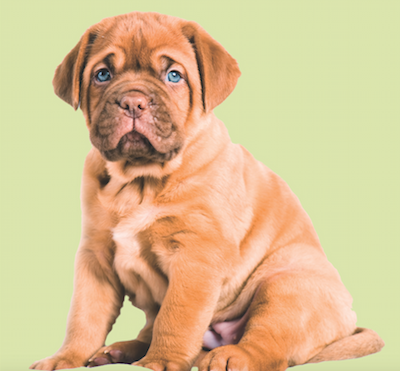 Cute puppy, balanced, with a good stop, wide muzzle and ear set. He appears to have a nice drop, and a hint of the furrow is there.
An easy way to remember the proportions or ratio: The circumference of the head equals the circumference of the neck, which equals the height at the withers. The Dogue’s body is slightly longer than those measurements but should maintain a square look. Of course, all Dogues’ measurements differ slightly, but these measurements denote its balance. The Bordeaux is one of the hardest breeds to achieve this balance.
To identify and select for the whole package, I believe you need to go back to the beginning of Bordeaux’s life. That cute puppy looks nothing like his future self; he changes the most of almost any breed.
As young puppies, these proportions are evident but not yet developed. A puppy’s head is not yet trapezoid in shape, nor does he have the mass of an adult, but he needs certain characteristics as a puppy that telegraph this adult balance.
Throughout my breeding career I have seen possibly hundreds of puppies. Although many of them are beautiful as youngsters, most will never develop into a balanced adult Dogue. They will be lacking in bone, head and muzzle width. Obviously, there is no such thing as a perfect Dogue, but certain necessary traits are needed to achieve a massive, balanced Bordeaux.
Newborn puppies appear as any other breed. They grow quickly, but develop slowly. I have found that at around five weeks of age, puppies look their best because at this point they have the most consistency: You’ll see a short muzzle, and wrinkles appear; the puppies will be short in stature, and are very wide. Head size differences are obvious. I have found that puppies are much too young and immature in development to pick at this age. In fact, the best-looking or most balanced pup at this age will not be my ultimate choice, because he will change. 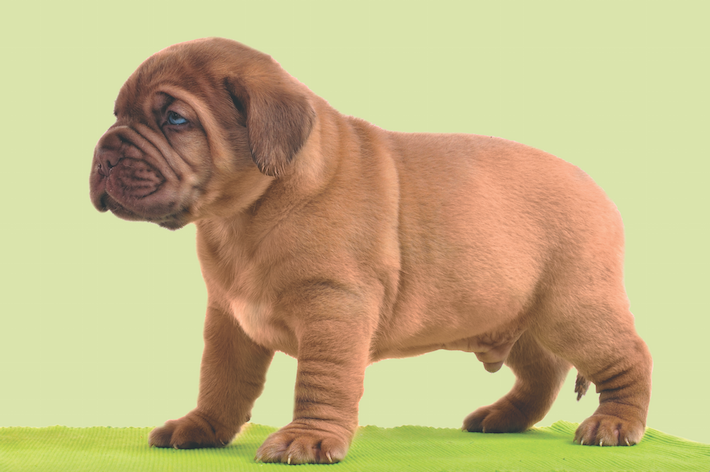 Typical of four to five weeks of age, with short, cobby build and good stop. Very compact, but too young at this point for evaluating.
I’ve found that from six to about 10 weeks, the change in the litter become very apparent. Most of my litters don’t even look like the same litter seen several weeks prior to this point. It’s during this time period that I start watching the growth of each pup to determine if that special Dogue is among the litter. Head size will be more pronounced, and the chest appears, along with leg length. Long or short bodies appear, necks become wider, longer or shorter. Also movement is more fluent to judge at this age. 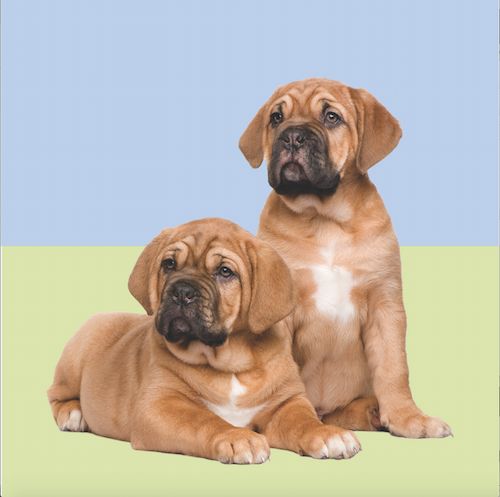 The puppy lying down on the left is a beautiful example of a black face, with good bone, nice head and enough wrinkle ... very soft wrinkle. The head balanced the shoulder nicely ... quite beautiful. He has the advantage over the puppy at right of a slightly stronger muzzle and better ear set.
That special pup must have a large head almost equal to his shoulders in width. The stop must be a right angle, with a hint of a furrow starting to show, which will develop and deepen as the dog matures. The bone of the skull should be massive and wide, even at this tender age. Generally, speaking, there will be the width of two to three fingers between the eye set.
Sometimes puppies have very doomed heads, some of which I have found will flatten too much, causing the skull to have only a stop with no forehead or bone between the ears. Ears should lay flat and be slightly long to compensate for head growth. Muzzle width and length are very important to balance the head. At this age, a drop chest is evident; its width will balance the front of the puppy. I look for shoulder width, short necks and a compact body length.
Usually if there is a pup of superior quality, my eye will find it; that pup will stand out. I cannot judge how tall a pup will be, or how big his head will be. These are traits that I watch as the Dogue develops during his first year.
Expression is subtle in young puppies. I like wrinkles that are soft and become more intense when the ears come forward. Young puppies must also move with fluidity; they should be able to move each leg independently. Hopping or stiffness in the rear should alert the breeder to possible hip problems. 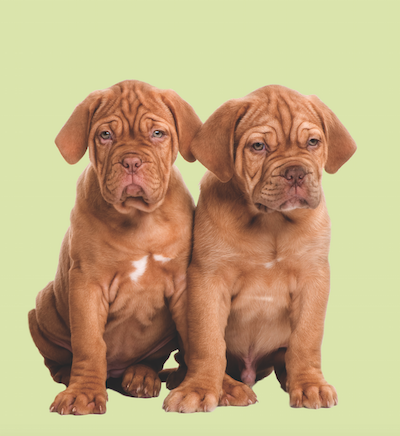 Overdone heads. Too much wrinkling can cause entropion.
Unfortunately, the Bordeaux exhibits very subtle indications of his future self. But if he lacks a drop chest and has a concave shape, he will develop into an adult with a lack of a drop chest and a concave chest. If he lacks wrinkles, bone or stop as a pup, then he won’t get it as an adult.
Picking the right puppy comes with experience from watching the traits develop and is a difficult craft to master. Although I may feel a pup exhibits all the traits that I desire in the breed, the next few years of watching him mature may make me question my selection.
I never pick a pup for its color; all shades of red are acceptable. Color should never outweigh proportion when choosing a dog for conformation. In my opinion, black-mask Dogues should be incorporated into more American breeding programs because they are more hypertypical, for some reason. They tend to add pigment, and many have better heads than the red-mask or the no-mask Dogues of the breed. A good black-mask Dogue should never be confused with a Bullmastiff or Mastiff, for he has a totally different head type. Black-face Bordeauxs are well dispersed throughout European breeding programs.
The first year of a Dogue’s life is upward growth. It’s the fast-growing period of the breed. Hopefully, he will grow proportionally. His body at this period of development is lean, his stop is well defined and the furrow is deepening. His muzzle may be a bit longer than desired, but that will shorten with maturity. His skull is still rounded, but should begin to widen between his ears. His rear is still rather narrow and is higher than his front; although he is high in the rear, he should still have correct movement. His topline should be wide and flat, not roached or sway backed. 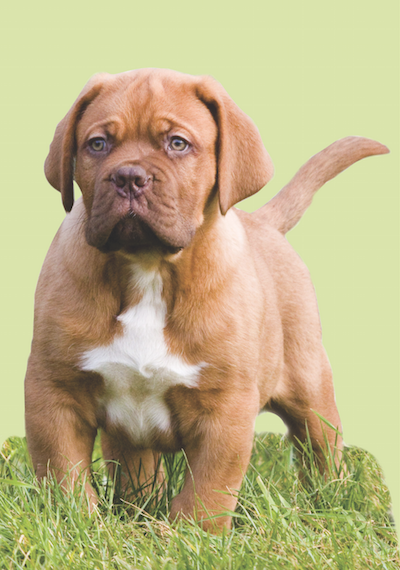 Eight weeks old, with a beautiful, large dropped chest.
Usually between 2 to 2 1/2 years of age, the Dogue either will or won’t exhibit all the qualities I’ve patiently waited to see. His changes are still not yet done; he will continue to develop for yet another year. I call this period the “fine-tuning” time of development for the Bordeaux.
Observing him at this growth stage, his muzzle has shortened, but hopefully not too much, and the width of the muzzle will complete the lower part of the trapezoid. The upper part of the trapezoid and cheek should be wide and massive, with a deep furrow that extends back to the upper skull. Cheeks should now be prominent and pronounced. All this mass should sit on a thick, cylindrical short neck, which, give or take, is equal to his head. His wide drop chest should fall below his elbows, supported by huge shoulders, large bone and straight feet, which completes the front of the Dogue.
A Bordeaux does not have a straight topline. He dips slightly after his withers, and after the slight dip he should become wide and straight to his rear, but the rear will be slightly higher than his front. The rear end should be wide and muscular, with free and easy movement.
That pick puppy has been growing for two- to three-plus years, and he has changed incredibly. I may be happy I picked this puppy, but I still critique him to see what improvements can be made in my future breeding program. Breeding is a never-ending cycle of tweaking and betterment.
Despite all the challenges of breeding the Dogue de Bordeaux, the overall temperament of the breed remains steady. He is intelligent and intensely loyal. The Dogue’s stature is compact, powerful and functional. His conformation shows his past working ability. He is unique. With continuing education and with responsible breeding, a well-balanced and sound Bordeaux is attainable.

Bonnie Gordon of BIG House Bordeaux in Eatontown, New Jersey, has been breeding Dogues de Bordeaux for a quarter-century; before that, she bred Mastiffs and Doberman Pinschers. She was involved in forming the first Dogue de Bordeaux club in the United States, and was also instrumental in starting and maintaing the Dogue de Bordeaux registry that would later be accepted by the American Kennel Club when the breed was recognized.
© Modern Molosser Magazine. This article may not be reposted, reprinted, rewritten, excerpted or otherwise duplicated in any medium without the express written permission of the publisher.
Fri, 10/27/2017 - 9:39pm