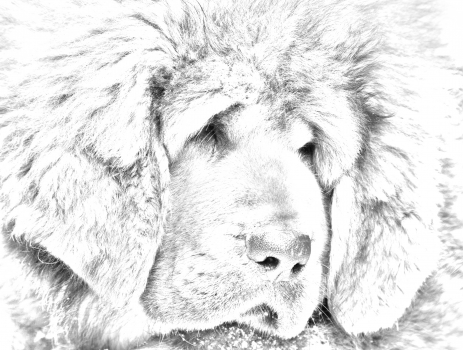 The white Tibetan Mastiff: Is it a rarity, or an impostor?

The answer depends on whom you ask.

To know the opinion of Suzanne Merrill of Ewing, New Jersey, you need only consider her kennel name – Snow Lion Tibetan Mastiffs, which evokes endless drifts of the white stuff. In 2008, a local breeder who had roots in China helped Merrill source a breeding pair of white Tibetan Mastiffs there, and she says their arrival was a first for the breed in the United States.

A former Samoyed owner, Merrill coveted the white coat of the Arctic spitz dog, but wanted the character of the Tibetan Mastiff. Her white dogs, she says, are “sort of a blend” of the best of both. She bred the pair together once and produced a litter of two males, both of them white. “The white Tibetan Mastiffs are somewhat of a mythical creature. People thought for years and years that they were legend and not true,” Merrill says. “They’re the real deal.”   But some long-established Tibetan Mastiff breeders would beg to differ.

“There’s no such thing as a white Tibetan Mastiff in Tibet,” says Rick Eichhorn of Drakyi Tibetan Mastiffs in Palmdale, California. Instead, he says, the explosive popularity of the breed in China has led to an almost reflexive desire to push the envelope beyond the standard in terms of size, wrinkling and, yes, color.

(The world standards are generally in agreement about white and cream-colored Tibetan Mastiffs, though they differ semantically: In the American Kennel Club standard, the two colors are listed as “disqualifications”; in the Fédération Cynologique Internationale (FCI) they are “eliminating faults,” and the British Kennel Club standard notes they are “undesirable.”)

Eichhorn, who was the first Westerner to judge the breed in China in 1999, remembers stopping at that all-breed show to watch a Pekingese specialty. “Ninety-nine of the 100 entries were pure white,” he remembers. Only one was the traditionally seen sable color with a black mask. In a continuation of that cultural fascination with the palest coat color possible, he says, “the white Tibetan Mastiff is a Chinese invention.” Any Chinese proclivity for white hasn’t quite gone viral in Tibetan Mastiffs: The last time Eichhorn judged the breed there, he didn’t have any white dogs in his two-day entry of 600 dogs. “But there was one guy with a setup who had a big white male in a cage. And on each of my trips I’ve seen supposed white Tibetan Mastiffs. There is a market for them.”

Critics of the white Tibetan Mastiffs point out that some are actually not white: Instead, they are simply very pale gold dogs with a dilution factor. In these cases, the dog has a brown or flesh-colored nose instead of a black one. From a distance, these dogs can appear to be a dirty white color, but Eichhorn notes that on closer inspection, they are really cream: The coat has a warm cast to it (as opposed to the iciness of a true white coat), and the ears tend to be a darker, biscuit color.

As for dogs with black noses and clear white coats, Eicchorn stresses that “a completely white gene does not exist in the Tibetan Mastiff.” The conventional explanation for its appearance in the breed population, he continues, is through an infusion of foreign blood: “Either an Anatolian, a Great Pyrenees or more likely one of the Ovcharkas, which are readily available at the Chinese-Russian border, was crossed in there.”

Certainly, cross-breeding to bring in desired traits has become commonplace in some Chinese breeding programs, with breeds such as Neapolitan Mastiffs and Newfoundlands being introduced in order to add bone and profuse coat. Some so-called “white” Tibetan Mastiffs are really gold dogs whose coat has been diluted. The telltale clue is a chocolate-colored nose like this one.

Eichhorn adds that the white color often comes with a more “generic flock guardian look” that lacks the regal, Asian demeanor of the Tibetan Mastiff. In terms of character, the white dogs tend to bark more, he says, with an edgier temperament that he attributes to the infusion of flock-guardian breeds like the Kuvasz and Ovcharka. “Tibetan Mastiffs are the opposite of flock guardians,” he explains. “They evolved with human contact, and don’t want to be out with the flock to protect it.”

As for Merrill, she knows the criticism is out there. She notes that her dogs and their offspring are not gold dilutes – they have correctly pigmented black noses – and she says that one of her puppy buyers did a commercially available DNA test, which came back “100 percent Tibetan Mastiff.”

“Anything that is new, people question or doubt it,” she says. “I expected that to happen.”

As for the possibility that these dogs will be become a mainstream part of Tibetan Mastiff breeding in Western countries? That matter seems to be rather black and – not so much – white. Gold Tibetan Mastiffs are acceptable, but cream ones are not. How are judges to tell the difference?

Breeder-judge Rick Eichhorn suggests that judges look to black-and-tan Tibetan Mastiffs to see just how light the various shades of gold in the breed can be in the breed. “The rule for judges to remember is that the tan points on black/tan and the dilute blue/brown tan pointed dogs correspond directly with the ‘various shades of gold’ listed in the AKC and FCI standards,” he says. “If you are going to allow the paler markings on the tan-pointed dogs, you allow it in your shades of gold. The cream dilutes (blue, brown, pink pigmentation) are disqualifications, not to be confused with an accepted light gold with black pigmentation.”

Deciding where a light gold ends and a cream begins can present a fine line. In such cases, some Tibetan Mastiff breeders advise, give the dog the benefit of the doubt.

© Modern Molosser Magazine. This article may not be reposted, reprinted, rewritten, excerpted or otherwise duplicated in any medium without the express written permission of the publisher.
Thu, 09/03/2015 - 11:07pm