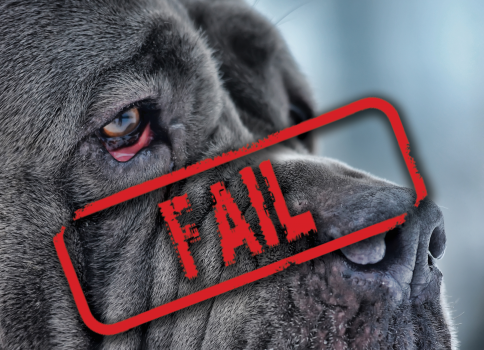 Usually, during high-profile dog shows such as Crufts, cell phones are buzzing and email inboxes pinging with on-the-ground reports of who won those coveted rosettes.

But in 2012 at the most famous dog show in Britain (arguably even the world), the scuttlebutt was over who lost – more specifically, who had their wins taken away. And Mastiff and Neapolitan Mastiff fanciers around the world were stunned to hear that their representatives never made it to compete in the Working Group at Crufts.

Those who have been following the purebred scene in the United Kingdom over the last several years know that its dog fancy has been under fire in the wake of the sensationalist “Pedigree Dogs Exposed” program that aired on the BBC in 2008. The film’s reporting on health problems in certain breeds tarred the entire purebred dog world, prompting a caught-unawares Kennel Club to scramble to mount a defense.

In the aftermath of “Pedigree Dogs Exposed,” the Kennel Club has taken great pains to emphasize that British dogs are “fit for function,” an alliterative phrase that has become its byword. The British registry rewrote the standards of some breeds, including that of the Mastiff, to discourage “exaggerations” in breed type. (In the United Kingdom, the Kennel Club “owns” the breed standards, unlike in the United States, where they cannot be changed without the assent of the parent clubs.)

In addition, the Kennel Club created a list of “high profile” breeds whose health was considered compromised by breeding for extreme physical characteristics. On this list of 15 breeds are a disproportionate number of Molossers, including the Dogue de Bordeaux, the Mastiff, the Neapolitan Mastiff and the St. Bernard. (The Bulldog and Shar-Pei, classified as Molossers under the European FCI system, are also on the list.)

The Kennel Club had announced that Best of Breed winners at the 2012 Crufts show, held March 8 through 11, would undergo mandatory veterinary inspections, a practice it has since instituted at other shows across Great Britain. In addition to signs of obvious ill health, the vets checked for eye discomfort or inflammation, lameness, respiratory difficulty and skin inflammation.

Along with the Basset Hound, Bulldog, Clumber Spaniel and Pekingese, both the Mastiff and the Neapolitan Mastiff were stripped of their Best of Breed wins, though their Challenge Certificates, or CCs – the award bestowed for beating all the representatives of their gender – remained intact. Neither bitch was permitted to compete in the Working Group.

The Mastiff, Ch. Secret Charm Avec Dibest, had won Best of Breed at Crufts two years before. The Neapolitan Mastiff, Ch. Ithani, is an international champion, as well as a Slovakian, Dutch and Luxemburg champion. The Kennel Club did not comment on the dogs specifically, other than to release this vague statement by its secretary, Caroline Kisko: “The veterinary checks were introduced to ensure that dogs with exaggerated features do not win prizes. The independent veterinary surgeon decided that the Mastiff and Neapolitan Mastiff breeds should not pass their vet checks and therefore they did not receive their Best of Breed awards and will not be representing their breeds in the remainder of the competition.”

In a later press release, Kennel Club chairman Prof. Steve Dean indicated that the majority of the six dogs that did not pass the veterinary check failed “due to eye related symptoms.” He also stressed that though six “high profile” breeds did not pass the health Crufts checks, nine others did.

The debate posed by the mandatory health inspections is an interesting one: Human nature and individual breed cultures being what they are, will breeders inevitably continue to resist changing breeding practices unless almost forced – a la Crufts – to do so? Conversely, will unyielding positions – such as insisting on tight eyes in a breed such as the Neapolitan Mastiff, which clearly will require more than one generation of corrective breeding to get there – potentially create even worse problems, as breeders hyper-focus on one area, to the detriment of others?

Predictably, many fanciers – especially those with “high-profile” breeds themselves – reacted vehemently to Crufts taking back the Best of Breed wins of those six breeds. Facebook lit up with objections – not to the health screening itself, but to the way in which it was conducted. A prime criticism was timing: Many contended that the health checks should have been done before judging, not after (although logistics and expense were likely reasons why this was not done). Another issue raised was discrimination: Only winners of the 15 “high profile” breeds were examined, but other breed winners and Group placers arguably exhibited some of the same defects that were cited among the flunkees.

Within a week, a group of outraged fanciers calling themselves the Canine Alliance formed, setting up a Facebook page and web site that drew international attention. Since then, the group has had meetings with the Kennel Club to share its views about how vet checks will be incorporated into championship shows in the United Kingdom, and to call for a moratorium on such testing until a better system can be worked out.

While it is meeting with its critics, the Kennel Club is not curtailing inspections. Reports at press time indicated that inspections have been held at four shows since Crufts, with only one dog failing its exam. Three other dogs refused to compete for Best of Breed and be tested. Since Crufts, the Kennel Club has announced that pen flashlights will no longer be used in the exams, and there has also been some suggestion that a “more liberal” approach to eye conditions is also being implemented.

In recent weeks, the Canine Alliance has sought to get out the message that it is more than “a one-issue organization,” and rather seeks to communicate the opinions of British breeders and exhibitors on a variety of topics. A major objective of the group, says its vice chairman and press officer Andrew Brace, is that “Kennel Club registration should be confined to progeny of dogs who have undergone some basic health testing (and passed) as a very minimum.”   As for the owners and breeders of the dogs who were made an example of at Crufts, at least one remains philosophic.   “It was my very first time at Crufts, and my first time in the United Kingdom. It was like a dream come true for me. I was very, very happy winning Best of Breed,” says Sonja Smidova of Kleine-Brogel, Belgium, who owns and bred the winning Neapolitan Mastiff, Ch. Ithani. “Later, after the vet check I was disappointed, of course, because the vet took the BOB away. But … the beautiful memories and the beautiful feeling of winning? No one is ever going to take that away from me.”