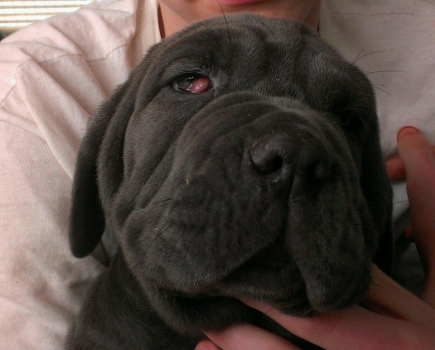 There is nothing that exasperates veterinarians more than these three little words:

Breeders aren’t veterinarians – unless, of course, they are, like the one you’ll meet later in this story. But long-time and established fanciers do have the distinct advantage of having worked with their breed, and perhaps their own family of dogs, for years, if not decades. They know from trial and error what works, and what doesn’t. Most important, they know that every breed is an island, subject to its own quirks and peccadilloes. In other words, what works for a Dachshund won’t always work for a Dogue. And in some cases experience can count for a whole lot.

This kind of “insider knowledge” is particularly crucial when you are dealing with a condition like cherry eye. Cherry eye, which is common in Neapolitan Mastiffs and Cane Corsos, involves a prolapse of the tear-producing gland of the nicitating membrane, or third eyelid.

Technically called prolapse nictitans gland, cherry eye is a hereditary condition found in certain dog breeds, including the Neapolitan Mastiff and Cane Corso. In affected dogs, the gland of the third eyelid swells and pops out of position, protruding from behind the eyelid and looking for all the world like the small red fruit that gives it its common name. While the condition isn’t very painful, the exposure of the inflamed tear gland can leave it vulnerable to infection or damage.

The accepted veterinary treatment of cherry eye is putting the enlarged gland back in place, either by “tacking” it to the orbital rim, or creating a “pocket” near the gland’s original position, and tucking the gland in there, holding it in place with sutures.

Dr. Robin White of Bluhouse Mastini in Oregon says there aren’t any formal studies on cherry eye in the Neo or Corso. But a pilot study done by the Mastino Health Foundation in 2010-2011 looking at 100 dogs across both breeds concluded that 25 percent of them developed the condition. And according to that study, 75 percent of the corrective replacement surgeries described above did not work in Neapolitan Mastiffs and Cane Corsos – compared to a failure rate of only 1 to 3 percent in other breeds.

Experienced breeders and breeder-vets in Neapolitan Mastiffs typically remove the prolapsed gland, which ironically is a less invasive and less expensive procedure than tacking; removal can be done with or without anesthesia in under 10 minutes. “But that is not standard practice in veterinary medicine, and that’s why it’s such an issue, why cherry eye is all over the Neo discussion boards,” Dr. White explains. The difference of opinion – “My vet says this and my breeder says that” – can fracture and strain the vet-client relationship. An 11-week-old pup with a cherry eye about the same size as the eye; the breeder recommend letting the gland swell to this size to avoid having more of it “pop” at a later date. Below, the same puppy a few hours after having the gland removed. Photos courtesy Cassandra Boczar Veterinarians are understandably concerned about removing the nictitans gland, which, while not the only gland that produce tears, is the major one. A resulting problem is keratoconjunctivitis sicca, also known as KCS or dry-eye syndrome, in which the cornea and conjunctiva become dry and inflamed.

While Dr. White doesn’t downplay this concern in other breeds, she notes that regardless of cherry eye, Neapolitan Mastiffs often need drops to address dry eye, because their looser skin around the eye leaves more of the conjunctiva exposed. (Many breeders recommend always having an eye lubricant such as Paralube on hand.) “And if there is a failed surgery” – which, according to the Mastino Health Foundation’s informal statistics, happens in three out of four cases – “that is going to cause more inflammation and swelling to that area, predisposing to KDS, which is the condition we are trying to avoid in the first place,” she says.

Each time the replacement surgery is repeated, there is risk of scratching the cornea and creating more scar tissue. And, given the Neo’s tendency to bloat, undergoing general anesthesia for the tacking surgery introduces significant risks of its own.

Cherry eye is so prevalent in Neos that breeder Cassandra Boczar of Il Drago Neapolitan Mastiffs in Indianapolis, Indiana, tells buyers in her puppy-packet literature that it is “a common problem that I can almost promise that your pup will experience.” Like Dr. White, she advocates removing the nictitans gland. And she often recommends that puppy buyers wait a couple of weeks after the cherry eye first appears before having the gland removed: This will allow the gland to prolapse as completely as possible, as well provide time for the gland in the other eye to pop, too, which often happens. “That way the pup only has to go to the vet once instead of twice, which saves you money and saves the dog the risk of anesthesia again,” she explains. Incomplete removal of the gland can lead to scrolled cartilage, in which the remaining tissue is kinked or bent, and appears as a red mass in the corner of the eye, necessitating more surgery to remove it. “If you have a vet who insists on tacking the gland instead of heeding your advice and removing the gland, then ask them to put it in writing that they will remove the gland and correct any problems they have created by tacking, free of charge, when they realize that tacking isn’t working,” Boczar suggests. “I guarantee no vet will do this, and it is probably best to just find a vet who has the experience and will remove the cherry eye.”   Sometimes, that is easier said than done. In many urban areas, Dr. White notes, “some owners have to drive for hours to have this simple procedure done since many of the younger vets refuse to remove the gland.”

No one knows for sure why cherry eye happens in the Neapolitan Mastiff, or, for that matter, why it happens with such frequency. Dr. White doesn’t think the predisposition is caused solely by slackness of the eye rims, which is common in both the Neo and, to a lesser degree, the Cane Corso.

“I think it has more to do with the immune system than it does with the tightness of eye,” she muses. In these two Molosser breeds, cherry eye tends to surface between four to six months, leading some breeders to theorize that vaccines, in particular rabies, are a trigger. Dr. White doesn’t see a correlation, but she does note that “dogs typically tend to get cherry eye at an age when the immune system is a bit rocky, and is sorting itself out” – perhaps not coincidentally, at around the same time that demodectic mange, another immune-mediated condition, can surface.

Discussing cherry eye in the Neapolitan Mastiff raises more questions than it answers, primarily because peer-reviewed research is pitifully lacking. “There’s not a whole lot of good research in cherry eye – period – in any breed,” Dr. White continues. What’s also missing are good – or, indeed, any – statistics on the failure rate of surgical removal. “Everything that I look at with the Neo is ‘more research is needed.’”   Ideally, above and beyond arriving at an accepted, breed-specific protocol for fixing cherry eye in the Neo, what’s needed is an understanding of why the problem happens in the first place. How Much Is Too Much?

Given the signature facial wrinkles of the Mastino Napoletano, expecting this breed to have an eye that is as tight fitting as that of a Weimaraner or Poodle is simply unrealistic. Droop is a fact of life with all but the plainest Neos. But that doesn’t mean that excessive skin folds – to the point that they obscure vision – are healthy or desirable in the breed.

Breeders need to arrive at a middle ground in terms of wrinkles and eye folds: There needs to be enough wrinkling so that the dog has type, but not so much that it becomes a caricature of the breed, with – most important – the dog suffering as a result. Breeders can control this by selecting for skin thickness as well as paying attention to the shape of the skull.

Dr. White notes that one irrefutable sign of having gone too far is a “diamond eye,” in which only a diamond-shaped excess of malformed skin, and not the eyeball, is visible, like the dog at right.   “If you can’t see the eyeball, the dog can’t see you,” she explains. “The Neapolitan Mastiff is supposed to be a guard dog. And if they can’t see, they can’t guard.

© Modern Molosser Magazine. This article may not be reposted, reprinted, rewritten, excerpted or otherwise duplicated in any medium without the express written permission of the publisher.
Wed, 12/16/2015 - 4:24pm