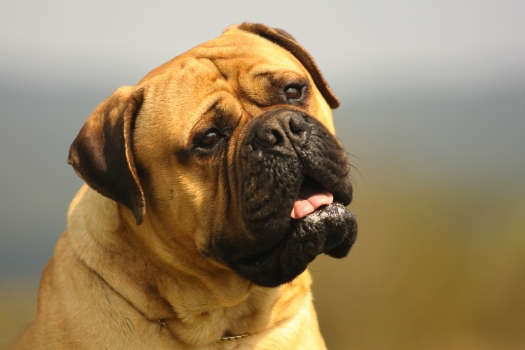 Take Note ... of the Bullmastiff Standard Periodically Modern Molosser asks accomplished fanciers to sit down with “their” breed standard and “take note” about where they think judges and breeders often go astray. Here we look at the AKC Bullmastiff standard. It’s not particularly long as Molosser standards go, and there’s lots of room for analysis and elaboration. Just tap video link to hear comments about the highlighted text.

Our guest commentor is Carol Beans of Tauralan Bullmastiffs in Santa Ana, California. Devoted to the Bullmastiff for almost a half-century, she has bred and/or owned more than 50 champions, with several dozen more sired by her stud dogs. In 2001 and 2003, one of her dogs was the #1 Bullmastiff all systems. She judged the American Bullmastiff Club’s National Specialty in October 2015.

General Appearance: That of a symmetrical animal, showing great strength, endurance, and alertness; powerfully built but active. The foundation breeder was 60 percent Mastiff and 40 percent Bulldog. The breed was developed in England by gamekeepers for protection against poachers.

Proportion -The length from tip of breastbone to rear thigh exceeds the height from withers to ground only slightly, resulting in a nearly square appearance.

Head: Expression - Keen, alert, and intelligent. Eyes - Dark and of medium size. Ears - V-shaped and carried close to the cheeks, set on wide and high, level with occiput and cheeks, giving a square appearance to the skull; darker in color than the body and medium in size.

Muzzle - Broad and deep, its length, in comparison with that of the entire head, approximately as 1 is to 3.

Lack of foreface with nostrils set on top of muzzle is a reversion to the Bulldog and is very undesirable. A dark muzzle is preferable.

Topline - Straight and level between withers and loin. Body - Compact. Chest wide and deep, with ribs well sprung and well set down between the forelegs. Back - Short, giving the impression of a well balanced dog. Loin - Wide, muscular, and slightly arched, with fair depth of flank. Tail - Set on high, strong at the root, and tapering to the hocks.

It may be straight or curved, but never carried hound fashion.

Forequarters: Shoulders - muscular but not loaded, and slightly sloping. Forelegs - straight, well boned, and set well apart; elbows turned neither in nor out. Pasterns straight, feet of medium  size, with round toes well arched.

Color: Red, fawn, or brindle. Except for a very small white spot on the chest, white marking is considered a fault.

Gait: Free, smooth, and powerful. When viewed from the side, reach and drive indicate maximum use of the dog’s moderate angulation. Back remains level and firm. Coming and going, the dog moves in a straight line. Feet tend to converge under the body, without crossing over, as speed increases. There is no twisting in or out at the joints.

Temperament: Fearless and confident yet docile. The dog combines the reliability, intelligence, and willingness to please required in a dependable family companion and protector.

© Modern Molosser Magazine. This article and video content may not be reposted, reprinted, rewritten, excerpted or otherwise duplicated in any medium without the express written permission of the publisher.
Sat, 09/19/2015 - 7:19pm