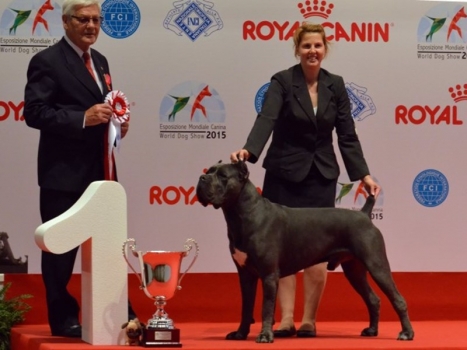 Massimo Inzoli of Italy had the privilege of judging Cane Corsos at the 2015 World Dog Show in Milan. In this interview conducted by Nicola Mille, Inzoli answers questions about the biggest problems facing the Corso, what breeders should be looking for, and what it’s like to judge this most Italian breed in its native land.

A direct question, for starters: What was the biggest challenge in judging an Italian breed in its country of origin, at an event so unique and important as the World Dog Show?

Definitely the time factor. All the judges were required to finish by 1:30 p.m. for organizational reasons. Judging an event of this importance with some 140 entries in four hours was no small feat, both mentally and physically.

It’s difficult to judge and assess the virtues and faults of a dog in the three minutes prescribed by FCI rules, let alone in about half that time.

The day before, you judged bitches at a club show. In the past, you’ve judged four of these shows a year in Italy. At the club shows, you’ll agree, there are times when the judge doesn’t just give a placement, but makes a statement about breeding stock. It’s logical, then, to ask if there are differences in the kinds of dogs you put up at a club show versus an international all-breed show like the World Dog Show.

They are two different types of events. At the club shows, you are always more aware of the essential characteristics of type that, as in almost all the breeds, are focused mostly on the head. At the World shows, by contrast, the total dog is viewed with more attention – the balance, symmetry, movement and outline.

At all-breed shows, it’s necessary to put up a dog who represents the breed in the Group ring, and not only focus on important characteristics of breed type. Certain choices, perhaps more extreme ones, therefore can’t be made in these competitions. At the club show I judged on the day before the World Show, I only judged the various classes, leaving the difficult job of deciding among them to my colleague who judged the males. This is no small thing, because in the final decision, sometimes this can influence the direction of the breed. What were the most important focuses in your judging, above all those that were decision makers? With respect to the other important traits, which ones did you give particular priority to in your judging at this show?

A judge’s criteria vary at times, depending on how the breed is evolving and being bred, and the direction in which that is going. In this respect, the issue of ear cropping is what I consider a very delicate subject, which certainly will affect breeding in the coming decades. If with cropped ears we have given priority to certain characteristics of type, selecting and preferring dogs with heads that were relatively wide, in the coming years this will no longer be possible. To get correct head type whether or not a dog is cropped, one needs to give priority to those traits that unequivocally differentiate our breed from those related to it, without basing that solely on color.

It will be necessary to pay attention to the following points:

• A slight convergence of planes with the correct proportions, without producing muzzles that are too short in order to have wide jaws

• Clean heads with as few wrinkles as possible, and with as little roundness as possible (remember that the Cane Corso head is angular)

• Heads that are long as well as volumized

Most of the heads that have been selected in the last few years have been short and heavy, belonging to other breeds related to the Cane Corso. In always trying to increase the traverse diameters of the head, there developed a tendency toward a general shortening of the head. Yes, the muzzles are 34 percent with respect to the head, but they are too short, precisely because the skulls that they are being compared against are short skulls.

As a result, the proportion between the skull and muzzle is correct, but the muzzle is short in an absolute sense. I decided to prefer, if it was possible, the platforms of the vertical face of the muzzle, preferring a slight underbite, and penalizing it when it was exaggerated.