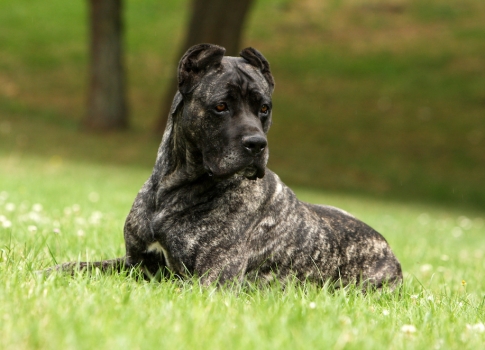 At least, that’s what a researcher in the Czech Republic has determined.
By
Denise Flaim

We love the breeds with whom we share our hearths and hearts – and that goes double for anyone fortunate enough to own a Molosser.

As a result, we do anything we can – from investing in preventive veterinary care to feeding a high-quality diet – to stave off that inevitable, awful day when we must say goodbye.

But there are some things, scientists say, that are simply out of our control.

For example, research has long shown that there is a relationship between the size of an animal and its longevity. A 2010 study of almost 16,000 dogs among 150 breeds found that the median lifespan was 11 years and three months. But smaller breeds lived significantly longer (with a median age of 13.5 to 15.56 years) than large or giant breeds (a mere 3.8 years to 7.46 years).

As a relatively newly recognized breed both in its country of origin and abroad, the Cane Corso obviously hasn’t been studied in any great depth. But Cane Corso breeder and researcher Evzen Korec of the Czech Republic hopes to remedy that.

In their 2017 paper, “Longevity of Cane Corso Italiano dog breed and its relationship with hair colour,” Korec and fellow authors asked more than 600 randomly selected Cane Corso breeders and owners across the globe to answer a questionnaire. They received responses about 232 deceased dogs from 73 kennels and individual owners spanning 25 countries.

The study did not find any significant difference in longevity between males and females, with the median lifespan of male dogs being 9.25 years, and female dogs, 9.33 years.

Color, however, was a different matter. The researchers found that the longest-lived dogs among all colors and patterns of Corsos were black brindles, which had a median age of 10.3 years. 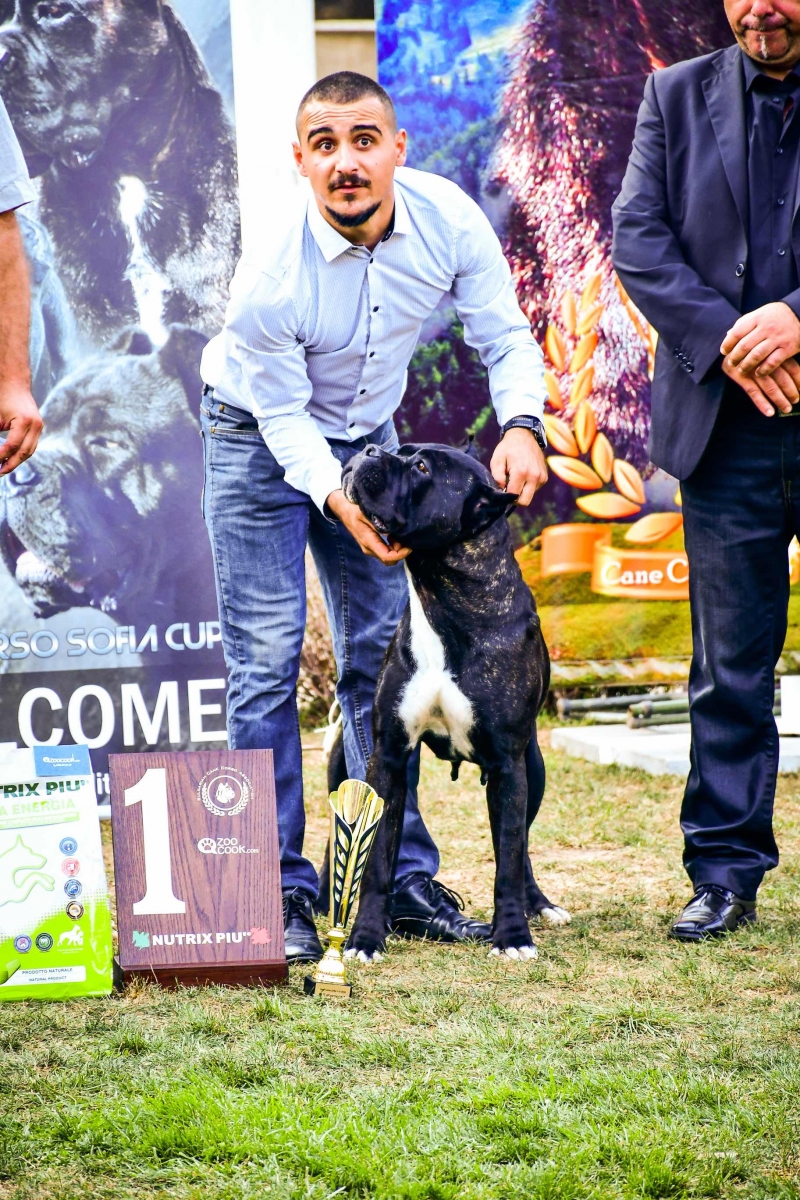 Black brindle Cane Corsos, like this female, have the greatest longevity, says a recent study.

(Since Corso color descriptions are a bit particular, a sidebar explanation is in order. Colloquially, breeders often describe the varying intensity of the brindle pattern as either “black brindle,” which appears to have a black body with relatively faint fawn stripes; regular “brindle,” which seems to be a blackish/brownish colored body with heavier fawn striping, and “reverse brindle,” where fawn appears to be — and actually is — the base color, with black stripes. In reality, all brindles have a genetically red or fawn background with black stripes; it’s just that sometimes the brindling is so heavy as to make it appear as if the black itself is the background color.)

In the study, the long-lived black brindles were followed closely by other brindle-patterned dogs (with a median lifespan of 10.13 years) and gray or formentino brindle dogs (9.84 years).

By contrast, non-brindle, solid-colored Cane Corsos — including blacks, fawns, grays and formentini — had a median age of 9 years.

Given that the median lifespan of brindle dogs exceeded the breed’s overall median lifespan – in the case of black brindles, by more than a year, “this fact may suggest a relationship between brindle status (black brindle, brindle, grey brindle) and longevity,” the researchers wrote.

While authors did not offer any specific reasons for this advantage in longevity among brindle Corsos,"our hypothesis is that the genes responsible for black brindle and other brindle patterns are linked to genes responsible for longevity," explains the study's main author, Evzen Korec. In other words, genes associated with longevity could be located on the same chromosome as those for the brindle pattern — a fortunate coincidence. Korec notes that as a result, the research doesn't necessarily mean that non-brindles are unhealthier than their striped brethren, but possibly that the latter have inherited a bit of a genetic edge.

Ironically, in recent years, black and gray Cane Corsos have seen a dramatic increase in popularity, with less of a demand for brindles.

“Brindles do live longer and are the most healthy,” she says, adding that she thinks solid-black Corsos are also the longest lived. Conversely, she feels dilute dogs are at a disadvantage because “dilute pigment is weaker, in terms of health.” As a result, when she is choosing puppies from among a litter of grays or formentini, she is careful to select dogs with as deep a pigment as possible, checking the eye rims and gums for good color. 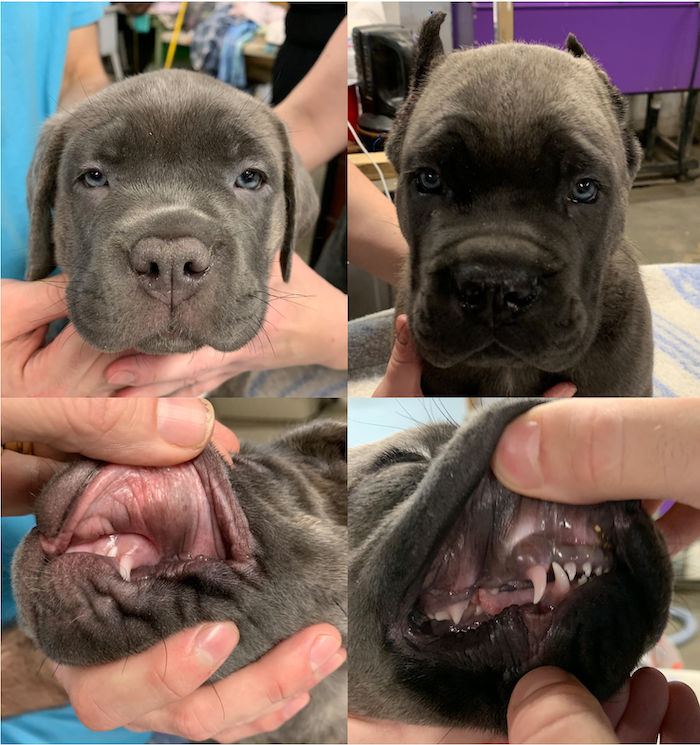 While the Czech study claims to have been the first to examine the potential relationship between median lifespan and hair color within one breed, it’s no longer the only one. A 2018 study looked at more than 33,000 United Kingdom-based Labrador retrievers of all colors, and found that chocolate Labradors – which, like formentini, are dilutes – have a higher incidence of ear infections and skin disease.

Shauna DeMoss of Castleguard Cane Corsos in Cedaredge, Colorado, agrees that dilute Corsos seem to have “higher instances of skin issues, such as alopecia and mange in warm climates.” Additionally, she says, “it seems they are more susceptible to autoimmune problems than brindles.” 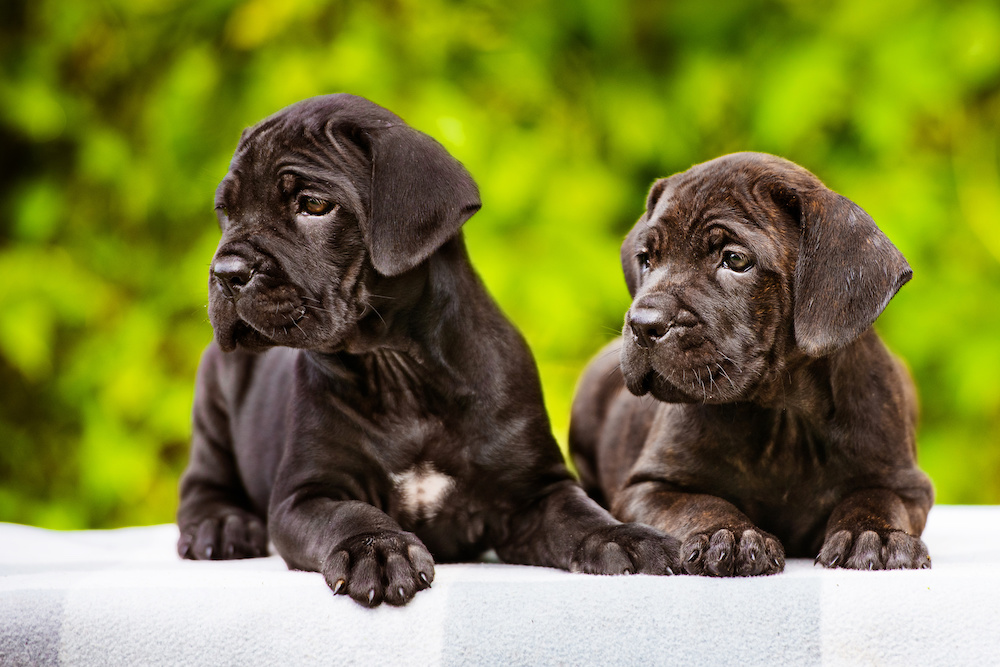 Of these two puppies, the brindle (can you spot him?) has the genetic advantage in terms of longevity.

Like many Cane Corso breeders, DeMoss also sees a connection between color and shedding.

“All fawns – whether they are formentini or black masks – shed … horribly,” she says. “I have had two fawns – one with black pigment, the other dilute – as house dogs over the last 20 years. The fawn hair is 10 times worse than the gray, brindle or black. You can improve the problem with proper diet, but it’s just part of having a fawn dog.”

DeVita adds that the fawn hair has a different texture – it is thicker, standing off the body more – and there just seems to be more of it. 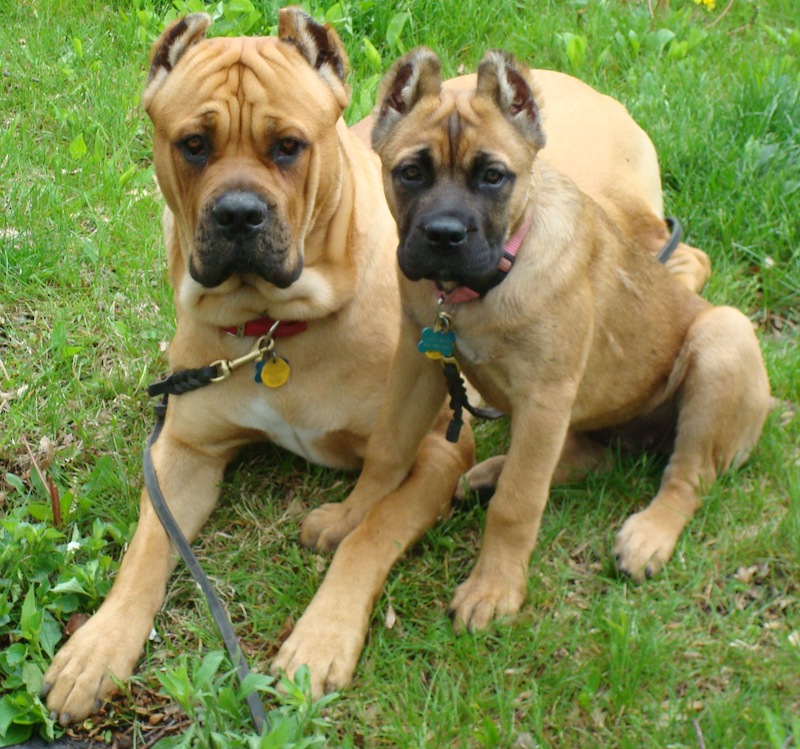 Fawn Cane Corsos are more prone to shedding than other colors, say experienced owners and breeders.

While coat color and other genetically determined traits do impact longevity, genetics are not always destiny. For example, paying attention to condition and body weight matters tremendously: A 2016 study of Labrador Retrievers concluded that dogs that had been kept lean for their lifetimes far exceeded the average breed lifespan. And revisiting attitudes toward spay and neuter could also be helpful:  A 2009 study of female Rottweilers found that they tended to live much longer than males in the breed – unless they were spayed during the first four years of life. 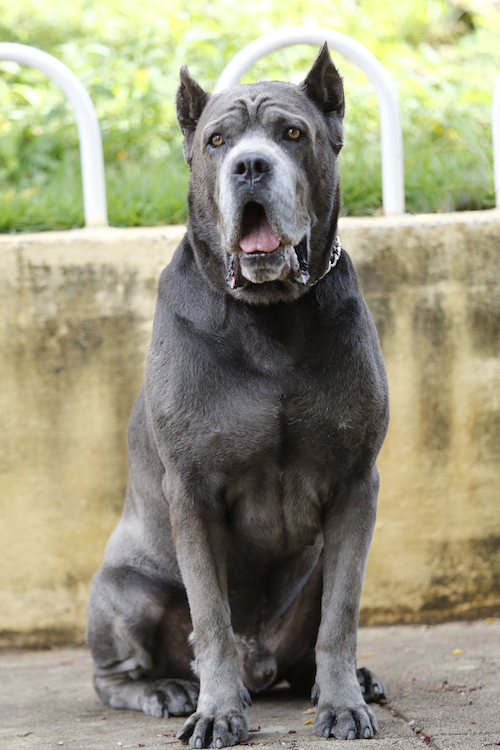 Every breeder and owner hopes for a long-lived Cane Corso, regardless of coat color.

No matter what color they are, Cane Corsos tend to live much longer than most other Molosser breeds, likely due to their more athletic body style. The study noted that the breed’s median lifespan of 9.29 years was higher than Bullmastiffs (7.46 years), St. Bernards (7.00 years), Mastiffs (6.83 years), Dogues de Bordeaux (3.83 years) and Neapolitan Mastiffs (2.33 years).

As for the researchers, they are continuing to dive deeper into the question of Corso longevity. Currently, they are collecting DNA samples of Cane Corsos who are 12 years or older — regardless of coat color. For more information, click here.

Fittingly, we'll leave you with that classic Italian toast: Evviva!

Quite simply: "To a long life!"

© Modern Molosser Magazine. This article may not be reposted, reprinted, rewritten, excerpted or otherwise duplicated in any medium without the express written permission of the publisher.
Tue, 06/18/2019 - 8:50am