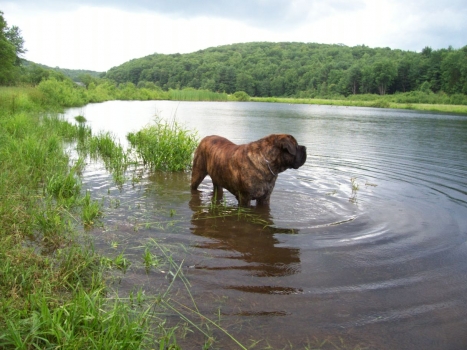 In Defense of Stripes

Breeders speak their piece about brindle bias in the ring
By
Denise Flaim
In the early 1970s, when Donna Bahlman of Old School Mastiffs in Wilsons, Va., went looking for her first Mastiff, she came across a 5-month-old puppy whose breeder just could not place him.
“To us, he just stood out – he looked like a tiger,” Donna says of the dramatically striped apricot male. “But the lady wasn’t able to sell him. Nobody wanted him because he was a brindle.”
“Hannibal” (Ch. Hannibal of Makar) joined the Bahlman family, finished his championship with Donna at the helm, and went on to become her kennel’s foundation sire. He is behind every brindle Old School mastiff, including granddaughter BISS Ch. Old School’s Ursa Major, an apricot brindle bitch who won the Mastiff National in 1983 under British breeder-judge Betty Baxter.
But many Mastiff folk would be quick to point out that Ursa’s success is the exception that proves the rule: While fanciers come up with all kinds of excuses about why their dog get dumped on the day, when it comes to brindle bias, there is a legitimate gripe. Molosser breeders and exhibitors – particular in Bullmastiffs and Mastiff – agree that brindles face an unfairly uphill battle with judges.
“I’ve shown under some judges who absolutely will not put them up,” says Margo Lauritsen of Lamars Mastiffs in Brentwood, Calif., adding that fawn brindles seem to have an even harder time than their apricot counterparts. “If you have a brindle and a fawn that are identical in body structure, the fawn will win every time. A brindle has to be spectacular to win.” 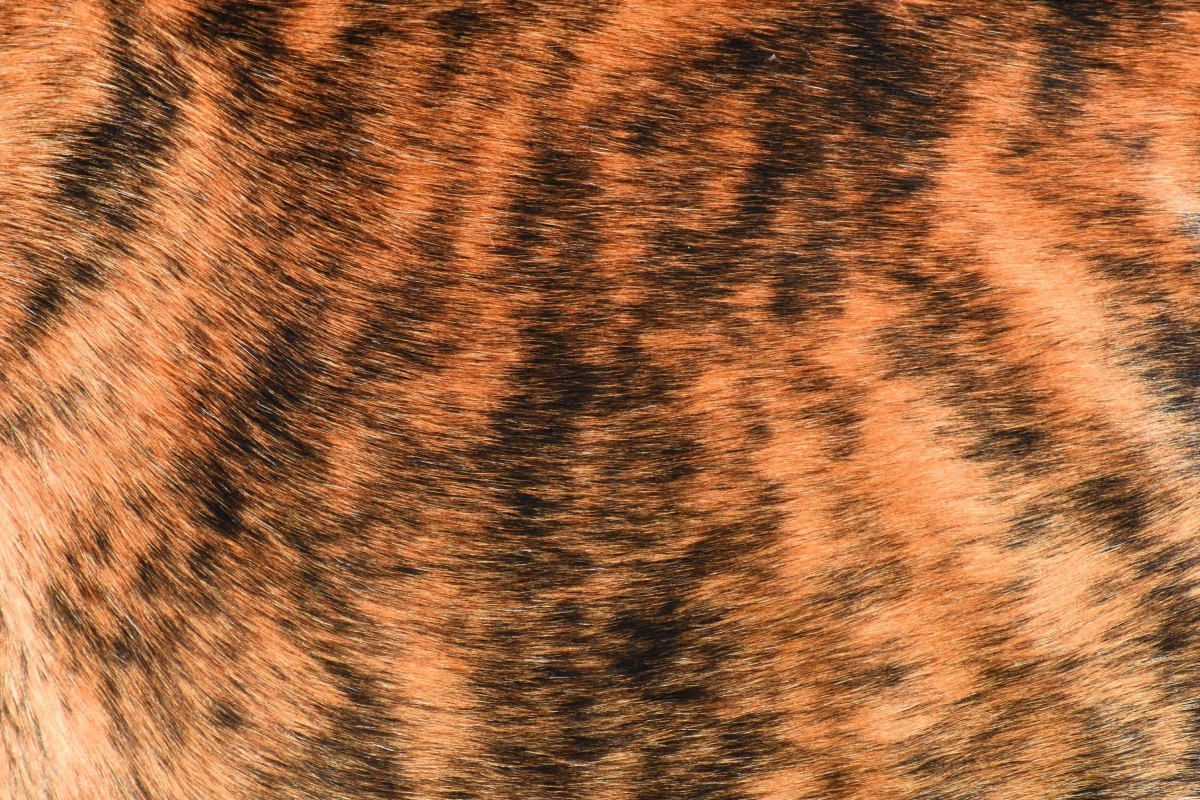 Close-up of brindling. Brindle is a pattern, not a color. The tiger-like stripes explains why the Italian word for brindled is "tigrato."
“A lot of American judges don’t like brindles, and will tell you that,” agrees Carol Beans of Tauralan Bullmastiffs in Santa Ana, Calif. “Unfortunately, that isn’t an option they have: It’s not only an accepted color, it was the desired color of the breed because of the near invisibility it lends at night.”
Several factors make it more difficult to evaluate brindles if the judge doesn’t pay close enough attention. Striping can camouflage or distort shoulder layback and stifle turn, creating an optical illusion – for instance, making a straight shoulder appear sloped, or vice versa. Expression can be more difficult to see on a brindle dog than his lighter-faced counterpart. And while white markings might blend in more on fawn dogs, they are glaringly visible on brindles.
Brindling also accentuates movement flaws. “Because of the striping, any movement is noticeable,” says Carol, who has been in the breed for 44 years. “If they roll a little over the top, it’s really obvious.” Similarly, less-than-perfect top lines show up more starkly on a brindle than a solid-colored dog. 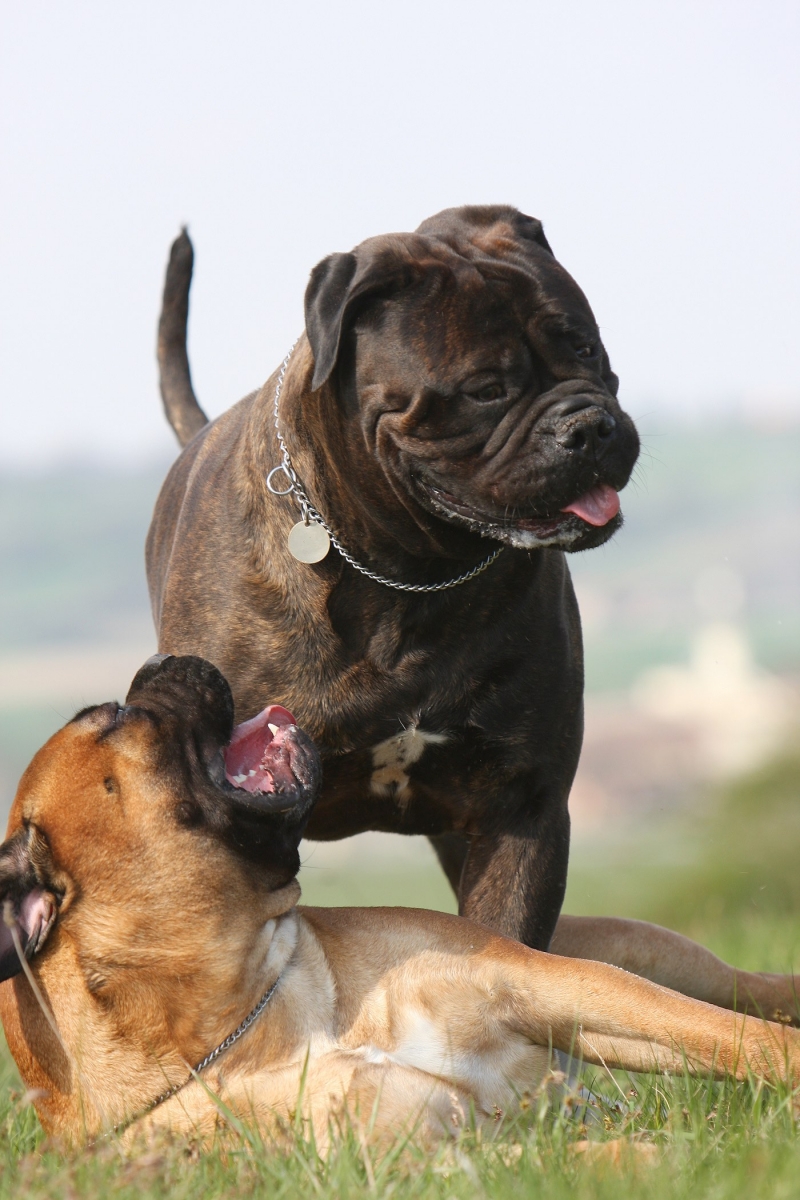 In the show ring, brindles don't always come out on top.
Karin Stephens of Messiah Mastiffs in Nazareth, Penn., notes that brindles can take longer to mature. And even after they have filled out, their darker color fools the eye, making them look less substantial when they are not. “A darker dog looks slighter – it’s the same reason why we wear black when we want to look thinner,” says Karin, who won the Breeder’s Cup at the Mastiff National with three brindles.
That’s not to say every judge indulges this brindle bias. Generally speaking, English judges tend to be more accepting of brindles. And some judges on this side of the pond recognize the challenges brindles encounter.
“I have no idea of why some judges judge on color. Personally, all dogs are green to me and I judge the dog, as none of them should be green,” muses longtime AKC judge Pat Hastings of Aloha, Ore. “I do not understand why brindle should be any different or why a judge should prefer fawn. As a matter of fact, while I was working on my Working application, [respected judge] Lang Skarda told me if all things were equal, put up a brindle, as the breeds need them.” 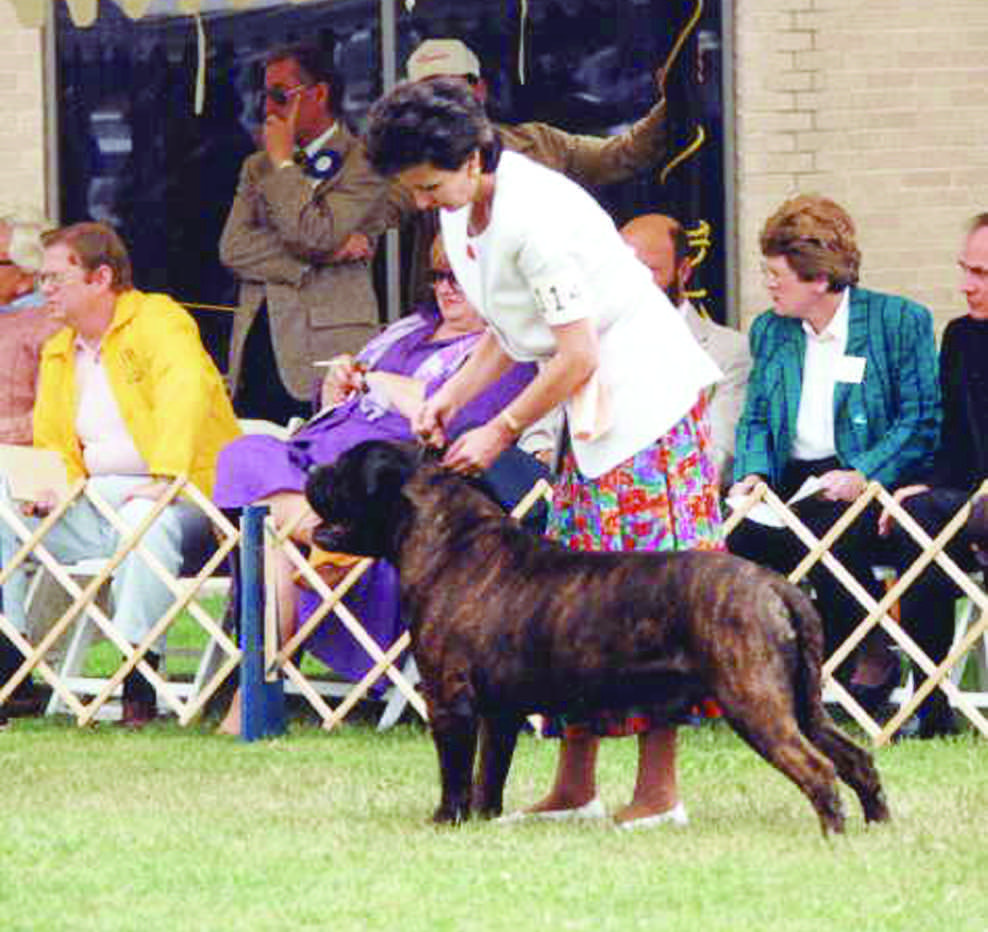 Am/Int’l Ch. Blackslate’s Boston Blackie, ROM (“Mister”), whelped 1983, sired 41 American champions. He was bred by Dan and DaRhonda Gleason, and owned by Virginia Rowland.
Hard to finish and just as difficult to sell, brindles soon become a self-fulfilling prophecy: Because there are fewer brindles in the ring, judges become even more accustomed to fawns and continue put up what is familiar. The paucity of brindles means less quality sires and dams to choose from, and still fewer brindles being produced. (Genetically, in order to produce brindle, one parent must be a brindle.) And some brindle boosters, retaining breeding stock primarily for its color and not other virtues, can exacerbate the problem.
“Unfortunately what happens with brindles is that a breeder uses a mediocre brindle dog or bitch and they keep a brindle from the litter that is not necessarily the pick of the litter, but keep it just because it is brindle,” says breeder-judge Helene Nietsch of Banstock Bullmastiffs in Newtown, Conn.  “I have always had a brindle to breed, but I still only keep the pick of the litter, not the only brindle. I think that judges are culpable, but I think the quality of the brindles in the classes is far more the problem than the lack of understanding or confusion on the judge’s part in evaluating brindles.”
Carol Beans puts an even finer point on it. “You can love the color, but if you’re going to show it, you might try breeding something of quality.”
Though brindles can be conformationally equivalent to solid-colored dogs in every way, some breeders feel they have a different temperament, what Carol calls “pixiesh.”
Karin Stephens of Messiah Mastiffs agrees. “I think their personalities are different, like the difference between a yellow and a chocolate Lab – both are crazy, but the chocolates are more crazy,” she says. “Mastiffs pretty much lie around and don’t do anything – they lounge on the couch, go out to pee, and come back and watch TV. But brindle Mastiffs are really, really naughty, doing weird stuff that’s not normal for a Mastiff, like opening cabinets and taking stuff out.” 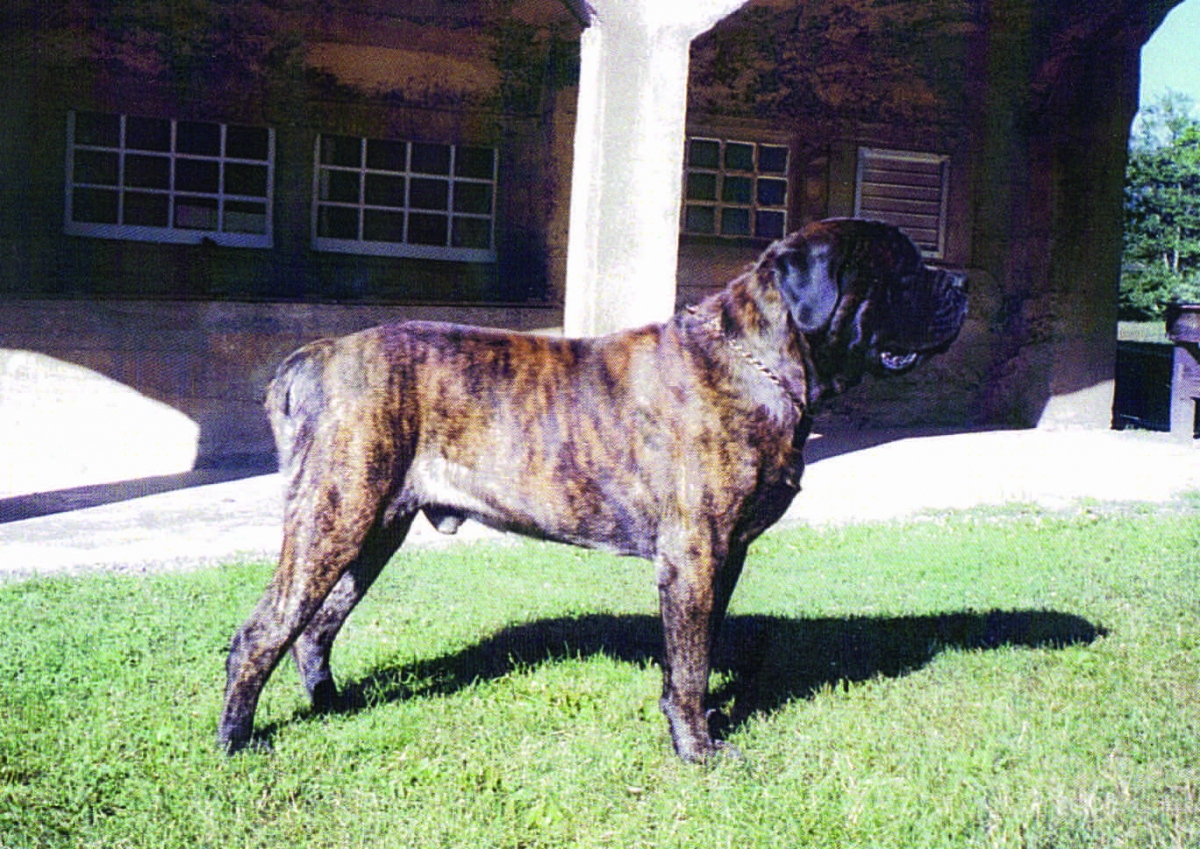 Ch. Madigan’s Doc Holiday, a popular brindle Mastiff from the late 1980s and early 1990s who has been used at stud internationally, with quite successful progeny. He was bred by Mary Alexander and Bernadette Madigan and owned by Benny and Mae Scanella.
Some breeders, like Donna Bahlman, say they see no difference in how brindles behave. (Another contention she disagrees with is the notion that brindles are needed in the gene pool to retain good pigment.)
But one thing most all fanciers can agree on is that color-blindness is in too short a supply when brindles walk through the ring gate.
“To my way of thinking, we have a lot more to work on,” including soundness and type, concludes Donna Bahlman. “Color is the least thing we have to worry about.”

The Exceptions to the Rule

While brindles can hit a glass ceiling in the Mastiff and Bullmastiff rings, brindling is essentially a non-issue in other Molosser breeds, such as Cane Corsos and Neapolitan Mastiffs. (In the United States, that is: Europe, with Cane Corsos at least, is another story entirely.)
“There just aren’t those biases in the breed,” says Mike Eraskian of Godiva Cane Corsos in Bronxville, N.Y., president of the Cane Corso Association of America. “And historically, brindles were valued for hunting, because they blended in with the vegetation.”
In Neapolitan Mastiffs, brindling occurs to a greater or lesser degree on the majority of dogs. “Very few Neos are solid colored,” notes breeder-judge Jim Deppen of Ironwood Neapolitan Mastiffs in New Tripoli, Pa. “In most cases, you’re not getting the chevron pattern that is so typical of Danes. You get hints of a strand of brindle hair, maybe on the hip or shoulder or neck.” 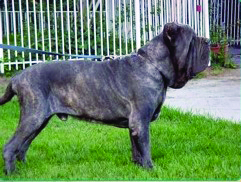 There are several possible reasons why brindle bias has not taken root in Corsos and Neos: Unlike their English-derived counterparts, these two breeds are relatively new, and color preferences may not yet be solidified. And the reverse brindling seen on the accepted dark solid colors in Corsos and Neos – including gray/blue, black and mahogany – is less dramatic than the dark brindling on a lighter fawn background that is so common in Mastiffs and Bullmastiffs.
© Modern Molosser Magazine. This article may not be reposted, reprinted, rewritten, excerpted or otherwise duplicated in any medium without the express written permission of the publisher.
Sat, 03/31/2018 - 5:02pm