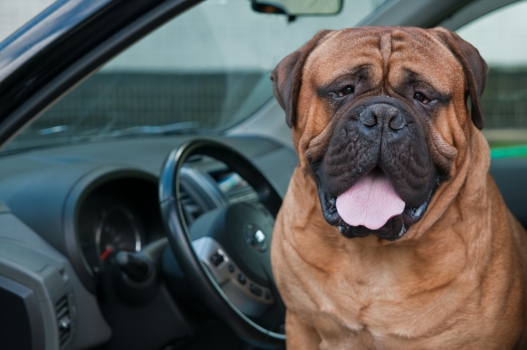 When it comes to breed type, more is not always more.

A Bullmastiff specialist’s extreme concern about extreme dogs
By
Billy Brittle
After reading Helene Nietsch’s excellent article on Bullmastiff type, I was struck by how so many of today’s eminent breeders and exhibitors seem to be giving out the same warnings with regard to the Bullmastiff’s alarming deviation from the standard, or breed blueprint. However, it appears to me that, despite the frequency and the gravitas of these warnings, they do, for the most part, go unheeded. Why is there such an apparent disregard for the breed standard, and what is the future for the Bullmastiff if its development continues to move it further away from its origins?
It is unquestioned that the Bullmastiff, or Gamekeepers Night Dog, has been around for a long time. Early references make mention of a breed that was loosely a cross between the bull-baiting dog of the time and the ancient Mastiff type, and clearly there was a requirement for a medium-sized dog with the biting power and tenacity of the Bulldog, combined with the strength and more predictable temperament of the Mastiff. The principal requirement being the guarding and protection of estates against the increasing threat of poachers.
England of the past had some fairly draconian laws that favoured the landowner over most other levels of society, and a hungry, desperate poacher with the shadow of a noose facing him could be a very dangerous opponent. This was no time for a half-hearted and noisy guard dog; the gamekeeper of the time wanted a dog that meant business and had the ability disable and bring down a full-grown man. It would have been required to cover a reasonable amount of rough terrain, principally at night and in a variety of conditions. These factors unquestionably determined the appearance, development and ultimately the function of the Bullmastiff. 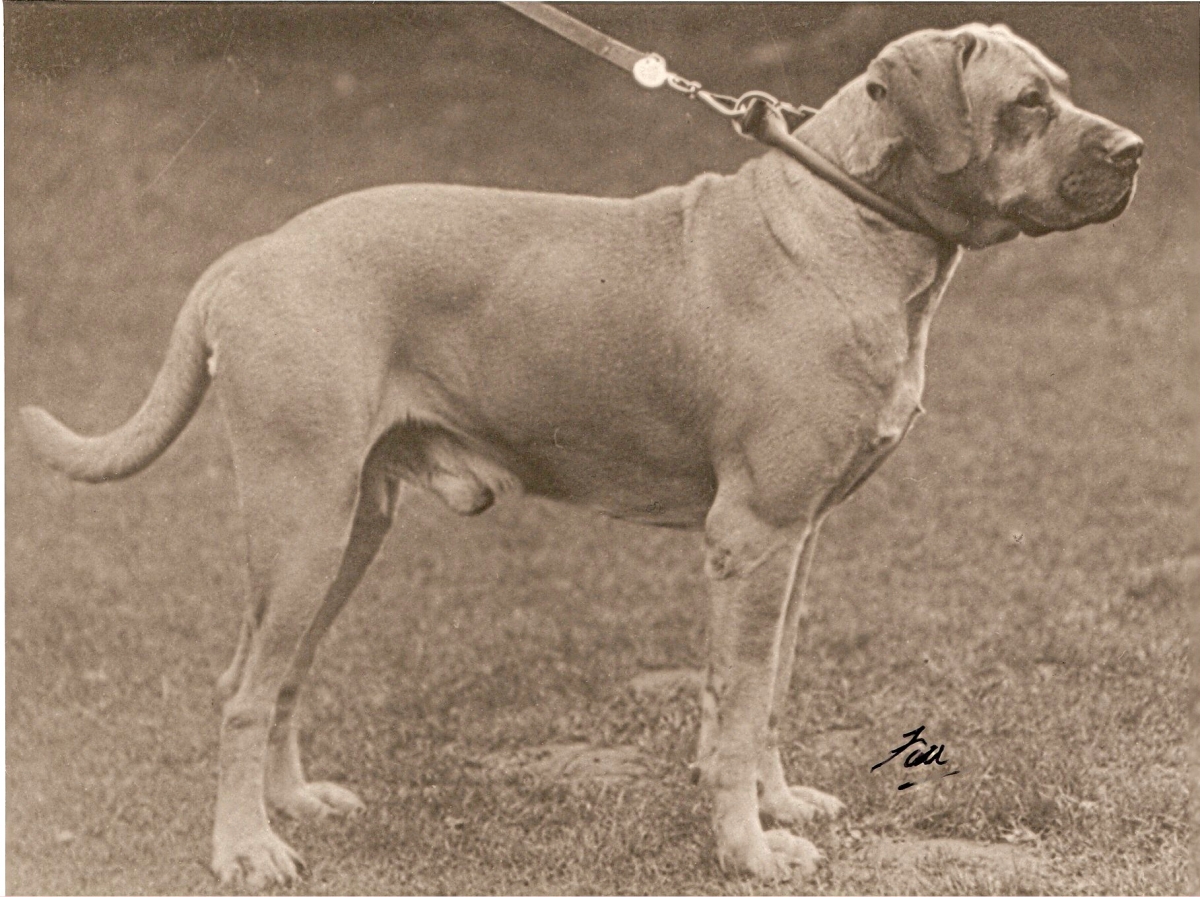 Ch. Farcroft Finality: A real working dog of the 1930s. However, with little  of the characteristics we look for today.
With the advent of dog shows, there was a general recognition that the “breed” needed some sort of standardisation, and the breeders of the time began to strive for “type” and consistency. During the early 20th Century, serious breeders like S.E. Mosley (Farcroft), W. Burton (Thorneywood) and J. Biggs (Osmaston) set about the task and began to produce both a recognised formula and of course breed type. Full recognition of their efforts came in 1925, when the Kennel Club finally recognised the “Bull-Mastiff” as a definitive breed.
With recognition came controversy, and almost immediately the two parent clubs adopted different standards. The Midland Bullmastiff Club produced the very first standard, and among a number of differences from today’s was the size limit of 75-90 pounds (40 kg) for bitches with height set at 23-25 inches (58-63 cms), and the 90-110 pound (40-45 kg) limit for dogs, and height set at 24-26 inches (61-66 cm). Breeders were also reminded that they should not aim to produce a dog as big as a Mastiff. The National Bull-Mastiff Police Dog Club adopted their own standard shortly after, with a number of differences from the Midland club, including height allowance a full inch more in both dogs and bitches. 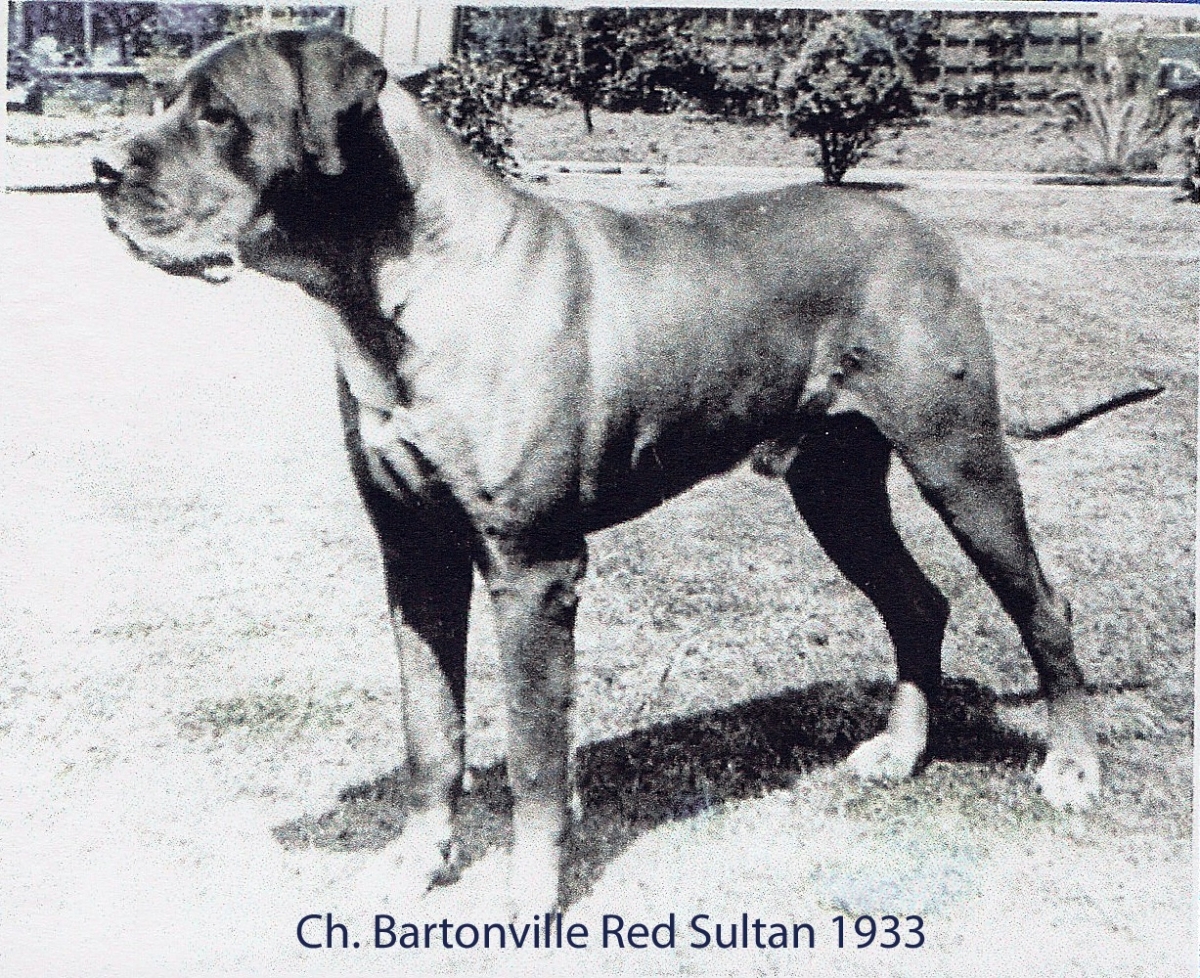 Ch. Bartonville Red Sultan: Another dog from the 1930s whom you can see is far plainer in head than we would expect today. However, the substance and bone are every bit as good as we would desire today. A dog more than capable of doing a night’s work.
However, despite differences over size, there was a uniformity in many areas, gay tails being a major fault, and a recognition in both that the temperament of the Bullmastiff should be courageous and bold, but with a docile and intelligent disposition. I would suggest that some of the other differences were more around the politics and perhaps the varying types the main breeders of the time were producing.
The following years generated more changes to the standard until the 130-pound limit was finally arrived at. However, many breeders of the time expressed concern with this trend and warned of the consequences of continuing to increase the size limit of the breed. Remember, the original working dogs were far smaller than the dogs we see today. Thorneywood Terror, for example, was a dog of 90 pounds who was able without exception to bring a man down and keep him down. Osmaston Daisy was a bitch of 88 pounds who undoubtedly saved her master J. Biggs’ life when he was attacked by three poachers. These were dogs that did the job, but would clearly be thrown out of today’s show ring. 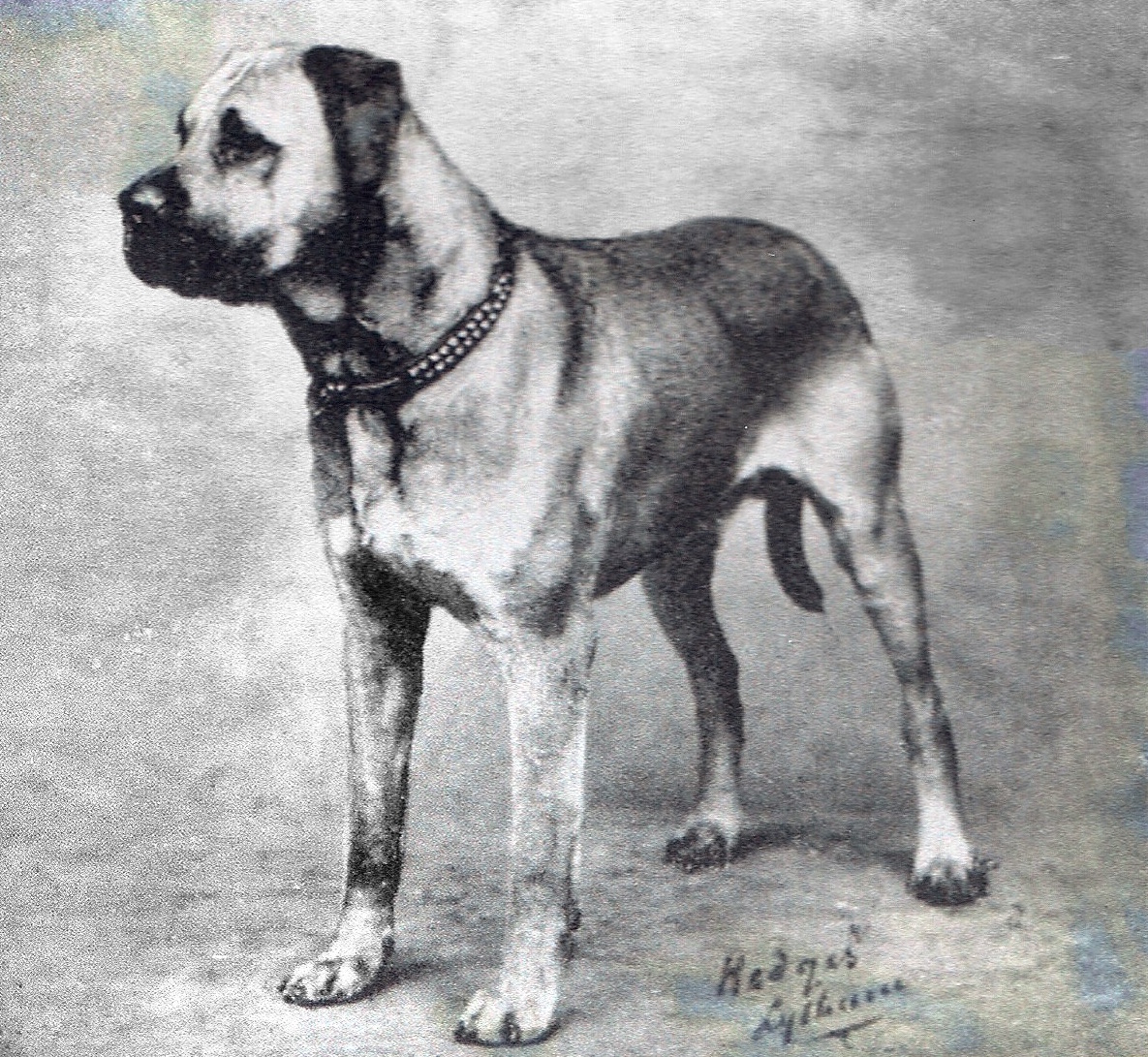 Ch. Sans Faute: No excessive characteristics here. A plainer head than perhaps we find acceptable today, but you cannot deny the obvious capability of this early champion, circa 1931.
In the United States, the standard was I believe finally settled in 1992, and is without doubt the most independent Bullmastiff standard in the world, in that its construction and wording are totally different than that of any other country, most of whom adopt the current UK standard. However, the basic blueprint for the breed is the same, and is easily understood by breeders and fanciers across the world. It does, however, contain certain phrases that are in my opinion often misinterpreted by some breeders. The sentence “Other things being equal the more substantial dog within these limits is favored” is one that I feel does encourage the breeding and acceptance of oversized Bullmastiffs. 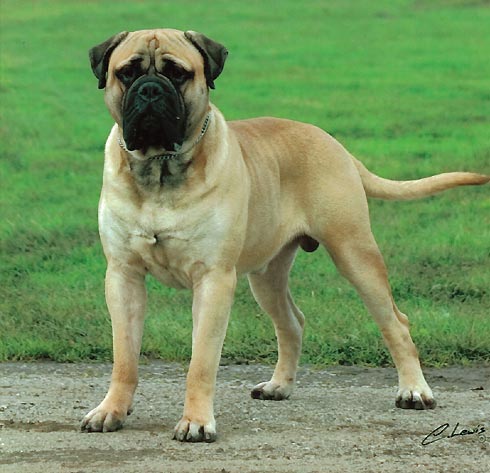 UK Ch. Oldwell Bugler: From the famous Oldwell Kennel, nothing excessive but plenty of presence and power represented in this dog. Not an overdone head, but for me an attractive one that is close to the standard. 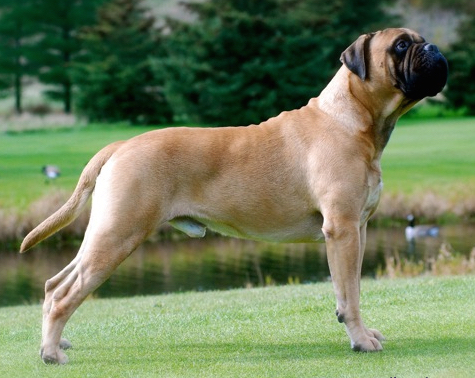 Ch. Bastion's Music in the Glen, RN, CGC: One of the author's favorites, a dog who is not extreme, is well balanced and still retains type. Incredibly well constructed and with the appearance of being able to work.
Why then does there appear to be such a disregard for the standard and heritage of the Bullmastiff that is giving rise to the extreme examples we are beginning to see? Let’s be honest, 170-pound dogs are not uncommon, and whilst they may look like Bullmastiffs, they are as far from the original breed as a Neapolitan Mastiff. They would never be able to work alongside a gamekeeper or do a fraction of the work that the dogs of 100 years ago were expected to carry out. Huge and heavy-boned dogs may look the part, but their structure is closer to the Dogue de Bordeaux. Heads like pumpkins may get admiring looks from the casual observer, but short, heavy muzzles with restricted breathing are not desirable for this breed or the work it is intended to do. As for gay tails, there seems to be little notice paid to this inherent fault nowadays, and I would imagine some of our pioneering breeders are turning in their respective graves at this total disregard.
I am not for one moment advocating a return to the Farcroft-type dogs of the Twenties or the even earlier representatives of the breed. The Bullmastiff was in its embryonic stage during this time, and some of the weak, poorly constructed animals of the period are not an idyll we should return to. But clearly some of the dogs of this period were accomplished working animals, and this is something we need to recognise and take into account. However, having developed the breed to the stage we find ourselves at now, and with the spectre of health, temperament and type issues becoming more apparent each day, I feel we need to rein in, and try to prevent the excessive development that seems to be occurring. 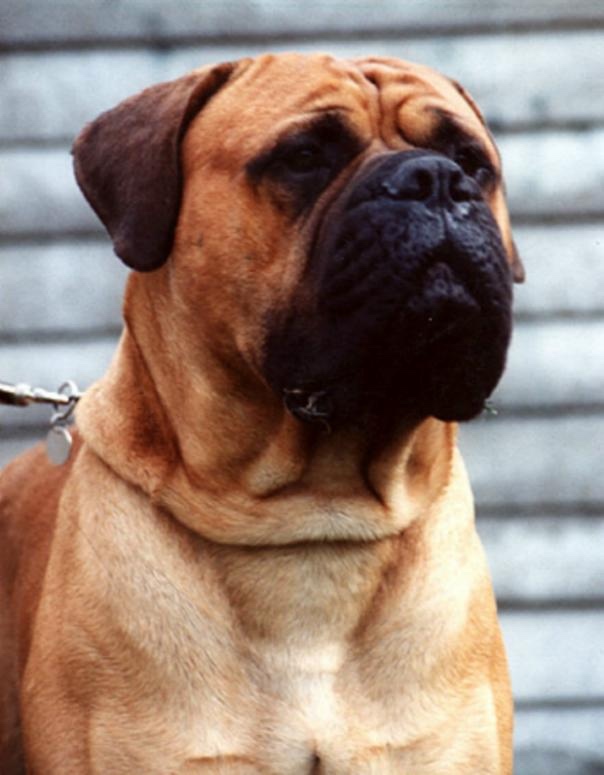 Ch Dajean Red Dragon: One of the great British dogs of the last 20 years. Well balanced with no excessive traits. This is a head that is attractive without leaning toward the Bulldog look that is becoming increasingly popular.
No one country is more responsible than another, and I have seen dogs exhibiting total excess of characteristics in every part of the world I have judged. Some of this is caused through total ignorance of the heritage of the breed and occasionally through a misunderstanding of the standard. However, what is most disappointing is perhaps the total lack of concern displayed by some who point to show-ring success as a disclaimer to all responsibility. This of course is where judges need to take greater responsibility. Why place dogs that are so far beyond the limits of the breed as to place them in a different category? This only encourages others to assume that this is what is required to win. If only the excellent judges mentoring scheme as operated by the American Bullmastiff Association was universally adopted, and the stringent judges training process followed in some Scandinavian countries were the norm across the board. Then perhaps we would be in a better position in relation to our judges’ knowledge and capability.
It is not always the judges’ fault, of course; they can only judge the animals put in front of them and then place in order of preference. But surely taking a little bit more time to understand the function of the breed would benefit everyone. And I don’t know about you, but I feel that for some of our judges the Bullmastiff is just another tick in a long list of breeds, and there is little real interest in the breed.
Ultimately, however, it is all of us, be it breeders, exhibitors, judges and lovers of this breed, who need to wake up quickly to the fact that unless we all take greater responsibility and care for what we breed and show, then the outlook could be very bleak.
I ask you this one question: Would the Bullmastiff sitting at your feet be able to go out tonight in total darkness, cover several miles of rough terrain over six or seven hours, bring down and hold a desperate 200-pound man, and then be ready for the same tomorrow? Hopefully, there are some that can say a resounding yes, but for the majority I think we know the answer.

Billy Brittle has been a Bullmastiff owner since 1976, primarily connected to the world-famous Oldwell Kennels for most of tht time. He has judged specialties in Australia, the United States and most European countries.

© Modern Molosser Magazine. This article may not be reposted, reprinted, rewritten, excerpted or otherwise duplicated in any medium without the express written permission of the publisher.
Thu, 07/05/2018 - 1:17pm