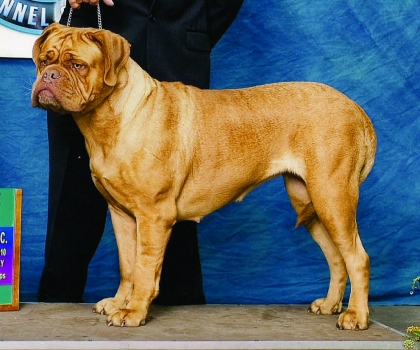 A recent female from the kennel, Von Hof's Gucci Girl.

Dogue is in the Details

American breeder Dennis Von Hof shares three decades of advice
By
Dennis von Hof
In the early 1980s, I owned Rottweilers. At the time, Dog World magazine had started introducing rare dog breeds, and in the February 1984 issue, I read about the Dogue de Bordeaux for the first time.
By the mid-’80s, I was interested in finding a suitable working breed, and the rare Molossers piqued my curiosity. I started researching and going to rare-breed dog shows throughout the U.S. My goal was to learn everything I could about the temperament of the different Molossers, and decide which one was right for me.
I visited Mastiff breeder Tobin Jackson’s famous Deer Run Kennels. It was an intriguing and heartbreaking experience, a maze of kennels scattered throughout the woods. Though Tobin’s primary breed was English Mastiffs (huge English Mastiffs), there were also Neapolitan Mastiffs, Presa Canarios, Dogues de Bordeaux and other “Mastiff-looking” dogs I didn’t recognize. Tobin hosted a Molosser show in New Jersey in 1986 that brought in many rare breeds, including Tosas, Cane Corsos, Argentine Dogos, American Bulldogs and Fila Brasileiros. 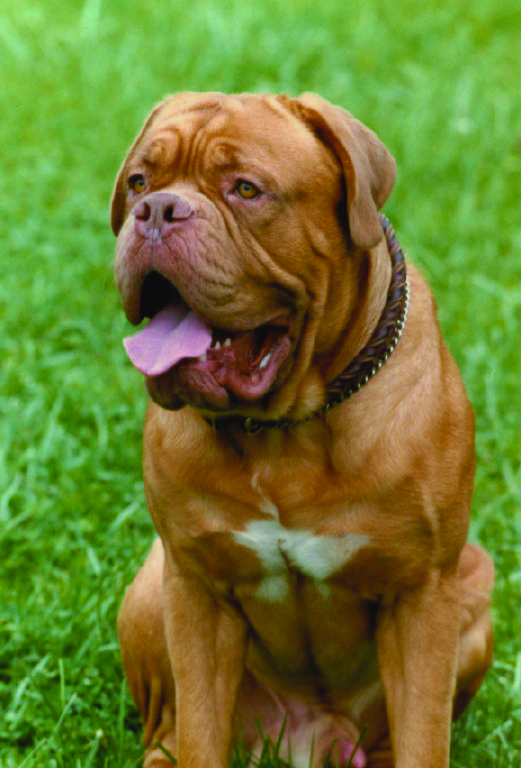 Von Hof's Elvis.
But the dog that really stood out was a male Dogue de Bordeaux named Cajun of Norris Place, owned by Steve Norris of Norris Place Kennels. “Cajun” had a very intimidating look about him, which immediately caught my attention. Not long after this show, I acquired my first Dogue. Less than a year later, I had her spayed because of poor hips. That is when I made a personal commitment to work toward producing healthier Dogues.
During this time, I also acquired other rare breeds to evaluate and compare them to the Bordeaux. I owned Dogo Argentinos, Tosas, Spanish Mastiffs and American Bulldogs. There was no comparison; because of its temperament and extreme loyalty, the Dogue De Bordeaux stole its way into my heart. (The Dogos would have been my second choice; they were natural athletes, with very few health problems, but their temperament was not as manageable as the Bordeaux’s for novice owners. The Dogo also tended to be a little more dog aggressive. And the Spanish Mastiff was too vocal for my liking!)

Logo from the original American parent club,  the United States Bordeaux Club.
In July 1989, the Dogue de Bordeaux was featured on the cover of Dog World. This was my first introduction to TNT Kennels, and its owner, Pete Curley. Within a few months, I spent the money I had saved for a down payment on a house to purchase two French imports through Pete. At this time, there were approximately 150 Dogues registered in the United States, and the official club was the United States Bordeaux Club.
(A brief history lesson: The USBC was originally a registry for the very first Dogues coming into the United States. Started by Pete Curley, it was the only registry for many years. As the USBC registry grew, the breeders and owners eventually formed a club. The club was very successful, and continued to grow. Eventually, we had more than 300 members, and more than 2,000 Dogues in the registry. In order to protect the registry, the board members decided to incorporate the club, which put them in charge of the registry and the club.  This decision divided the original parent-club members, and gave rise to a new club being formed. After the Dogue de Bordeaux was accepted by the AKC, the USBC’s complete original registry was hand-delivered to them, thus achieving the club’s ultimate goal.)
My foundation bitch, “Dolce” (Emeraude De La Font De Pepignon), was born on Aug. 27, 1989. Bred by Mr. Mme Robin Jean, her lines went back to the original De Fenelon Kennel. What a sweetheart! She was a very typey, extremely athletic black-mask female. My foundation dog, “Ernest” (registered as simply that – Ernest), a red-mask male, was born on June 19, 1989. He was bred by Mr. Amat Manuel, and his lines go back to De La Berse De Loup Kennel. They were my hiking buddies; some days, we’d leave in the morning, and stay in the woods all day. They both lived to be almost 11 years old. 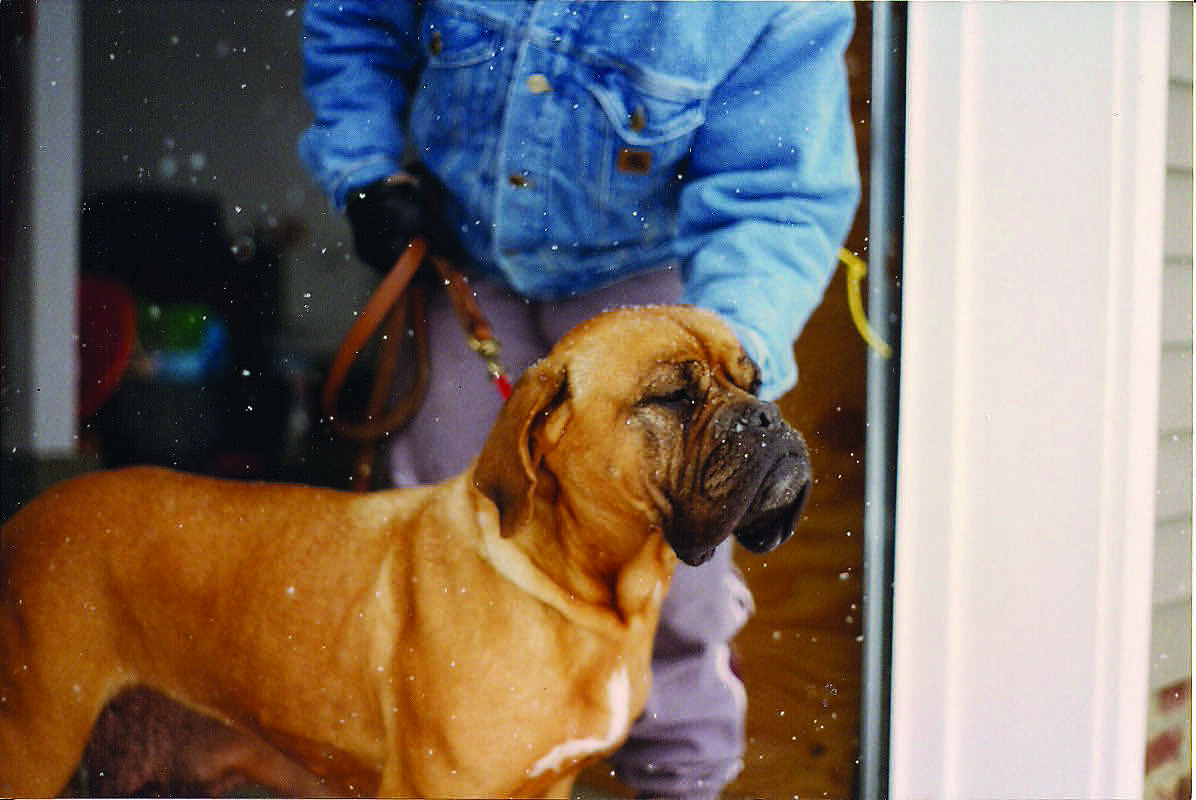 Foundation bitch for End of the Road Kennels, Emeraude De La Font De Pepignon.
In those days, Dogue de Bordeaux breeders were an extremely close-knit group. Since everyone was just starting out, we relied a lot on each other. We had one club match per year, which was held at the McCormick Center in downtown Chicago. Normally, we would bring in Raymond Triquet, the father of the breed. If Raymond couldn’t make it, we’d bring in one of his comrades. The Dogue chosen at our club match would be celebrated as the champion for that year. We were all friends, and I have a lot of good memories of those years.
The original Bordeaux community was made up mostly of breeders – Phil Pliskin, Charlie Warnick, Richard Mullins, Bonnie Gordon of BIG House Bordeaux, Pete Curley of TNT Kennels, Steve Norris of Norris Place, Joan Cuiffreida of Park Avenue Bordeaux, Madelyn Ark of Ark’s Kennels and Rich Keigner of Rich Kennels. Today, it is a more diverse community of pet owners, fanciers and breeders. Out of that list of original breeders, there are only three left: Bonnie Gordon, Joan Cuiffreida and myself. 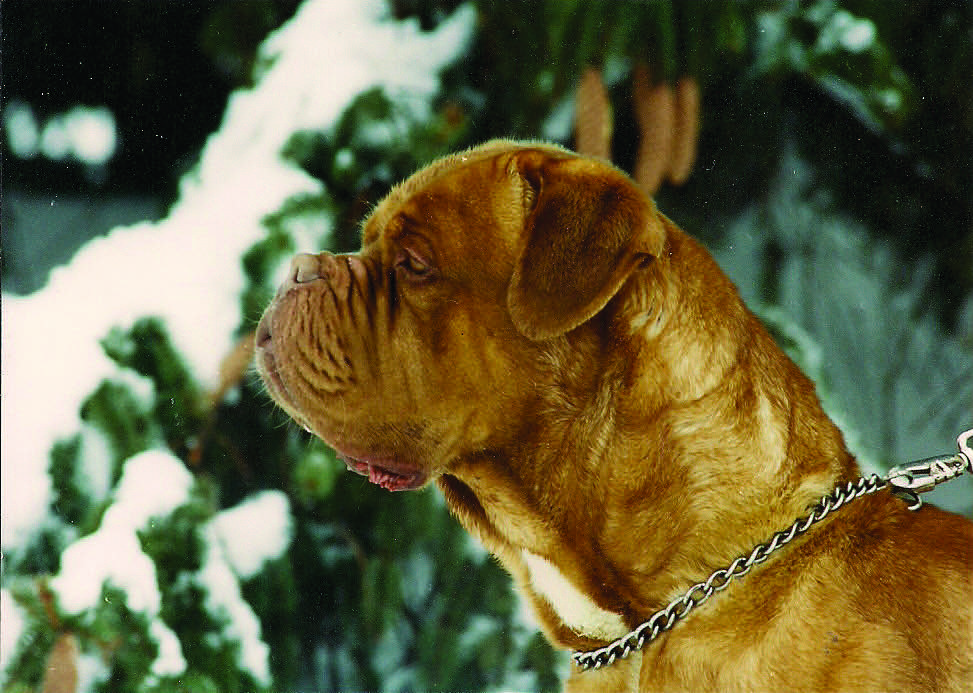 Von Hof’s foundation dog, “Ernest.”
One of my early mentors was Pete Curley, the first Dogue importer and owner of TNT Kennels. (He was also the breeder who provided the dogs for “Turner and Hooch,” the 1989 film that brought the Dogue de Bordeaux into the American consciousness.) From the late 1980s to the mid-’90s, his Dogues always won the club matches.
Until 1994, my only concern was hips and movement. That year, the club match winner was TNT’s Mugsie De Merrimac, bred by Pete Curley and owned by Bonnie Gordon of BIG House Bordeaux. I was totally impressed with TNT’s head type. It was time to create my own look, so I contacted Bonnie about using Mugsie. Dogues like Mugsie play an important role in creating the line I have today.
Bonnie introduced me to Joey Aldridge of Blue Blood Kennels, who taught me about line-breeding. In the very early years, because of our limited access to other European Dogues, line-breeding was the only way to produce type. But with this came health problems due to doubling up on certain lines. Type is always important, but in my opinion, health and temperament come first, no matter what. My advice for today’s novice breeder would be to find out what’s in your lines before you move on to an outcross; with all the new imports coming into the country, we have our work cut out for us! 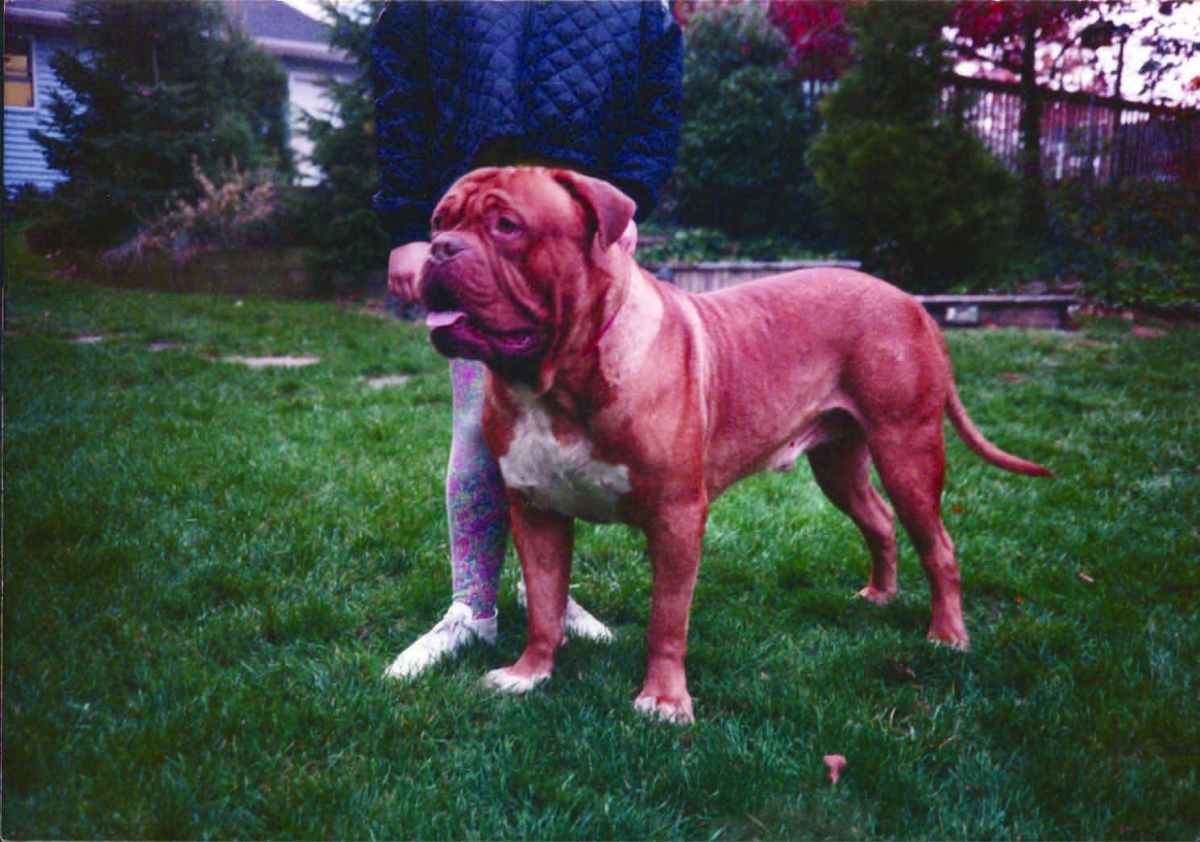 Above and below: TNT’s Mugsie De Merrimac, an influential dog in Von Hof pedigrees. 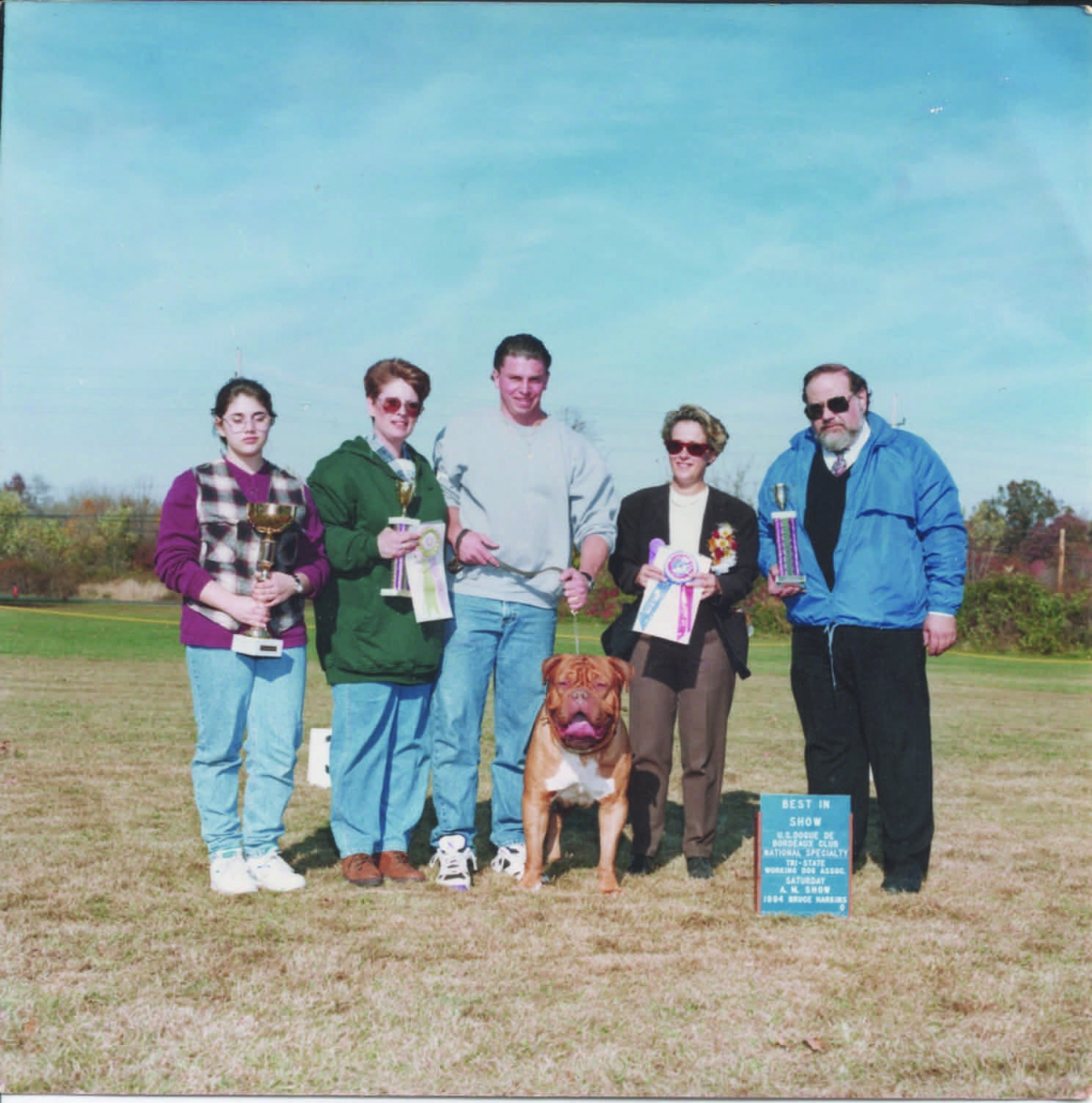 The Dogues de Bordeaux brought into the country in the early years had extremely large and superb heads. They were taller, with massive fronts, but in general had weak rears. Most of the Dogues were a lighter fawn color. And they tended to be a little more dominant than the Dogues of today. The Dogues of the past were more consistent. The Dogues of today come in any shape, size or color.
The Dogue has been in the United States for more than 30 years. We have some of the best Dogues in the world. But because of the lack of knowledge and harmony among the new breeders, many are relying on imports. It’s always necessary to bring in new lines at some point in your breeding program, but right now, we are being overwhelmed with imports. This is why, with a relatively novice group of breeders, it is so important for the senior breeders to speak up, and not be so isolated from the Bordeaux community. Because if we really care about the breed, we will all help each other and make sure we go in the right direction. 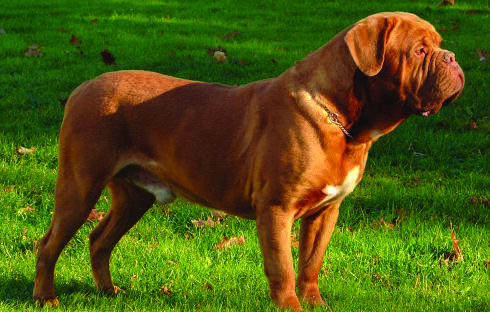 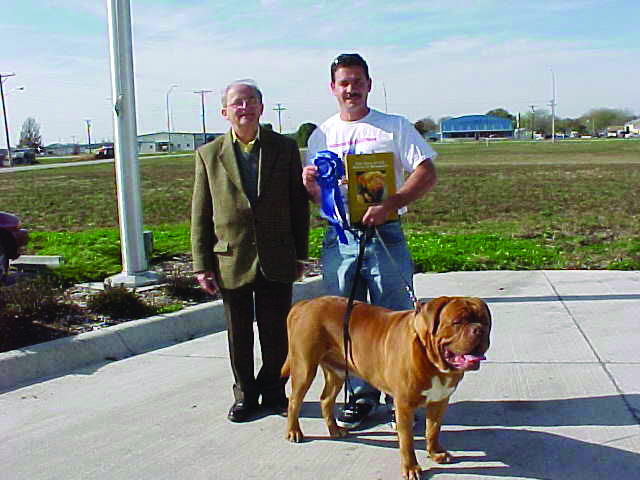 The United States Bordeaux Club (now defunct) invited world authority Raymond Triquet , among others, to judge its national specialty in 2000, the same year his "Saga" was translated into English. "Casanova" (Von Hof's Casanova), who took first place in Open males, is pictured here with Triquet and Von Hof after the show.
Of all the Dogues I’ve bred, “Casanova” (Von Hof’s Casanova) is my favorite. Cas was the sweetest, gentlest Dogue I’ve ever known. He was a combination of type, soundness and loyalty. Cas passed away four months before his 11th birthday, but he left his mark on my heart, and I will always miss him. If there is such a thing as reincarnation, Von Hof’s Cisco Kid is the modern-day version. Cisco is owned and loved by Tim Kelly and Julie James.
BIG House Montana Du Superb, bred by Bonnie Gordon, is another of my favorite Dogues. “Montana” was a combination of Emeraude De La Font De Pepignon (my foundation bitch), Del Matachin and L’Aube Rouge.  Montana placed fourth in Open males at the French Nationals in 2005. 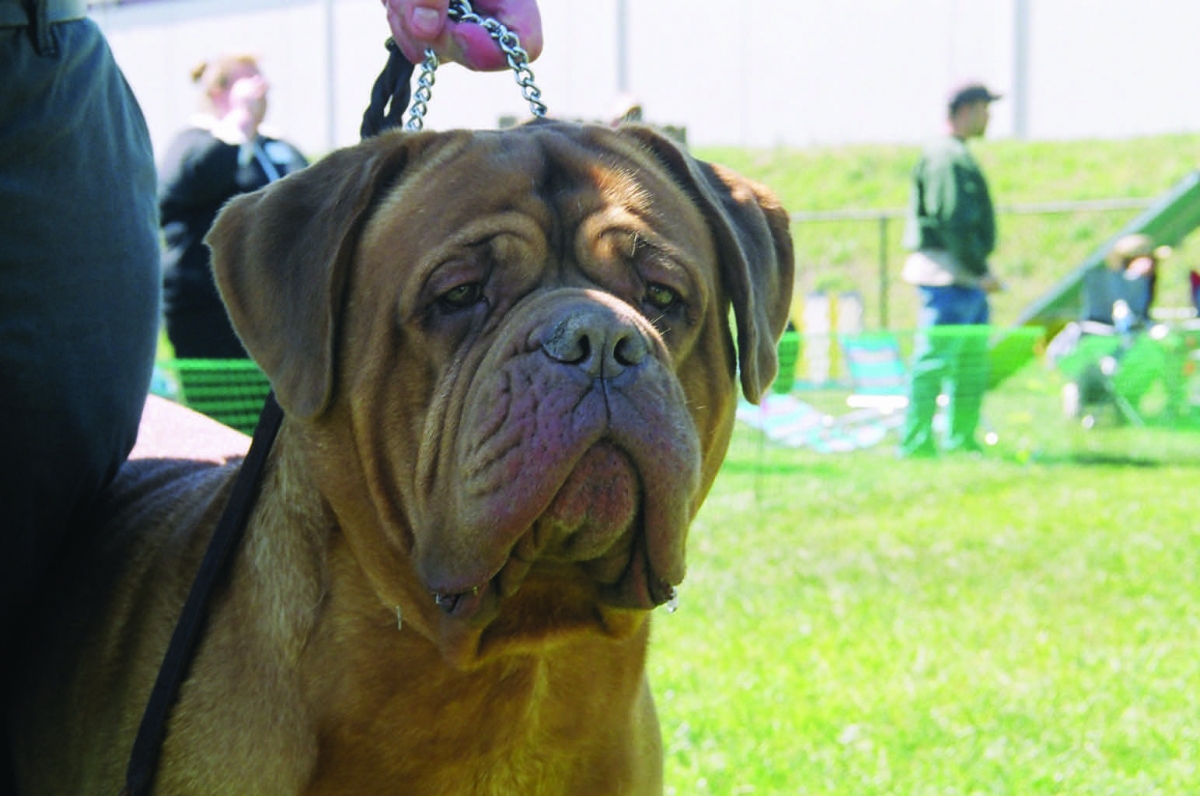 Above and below: BIG House Montana du Superb, bred by Bonnie Gordon. 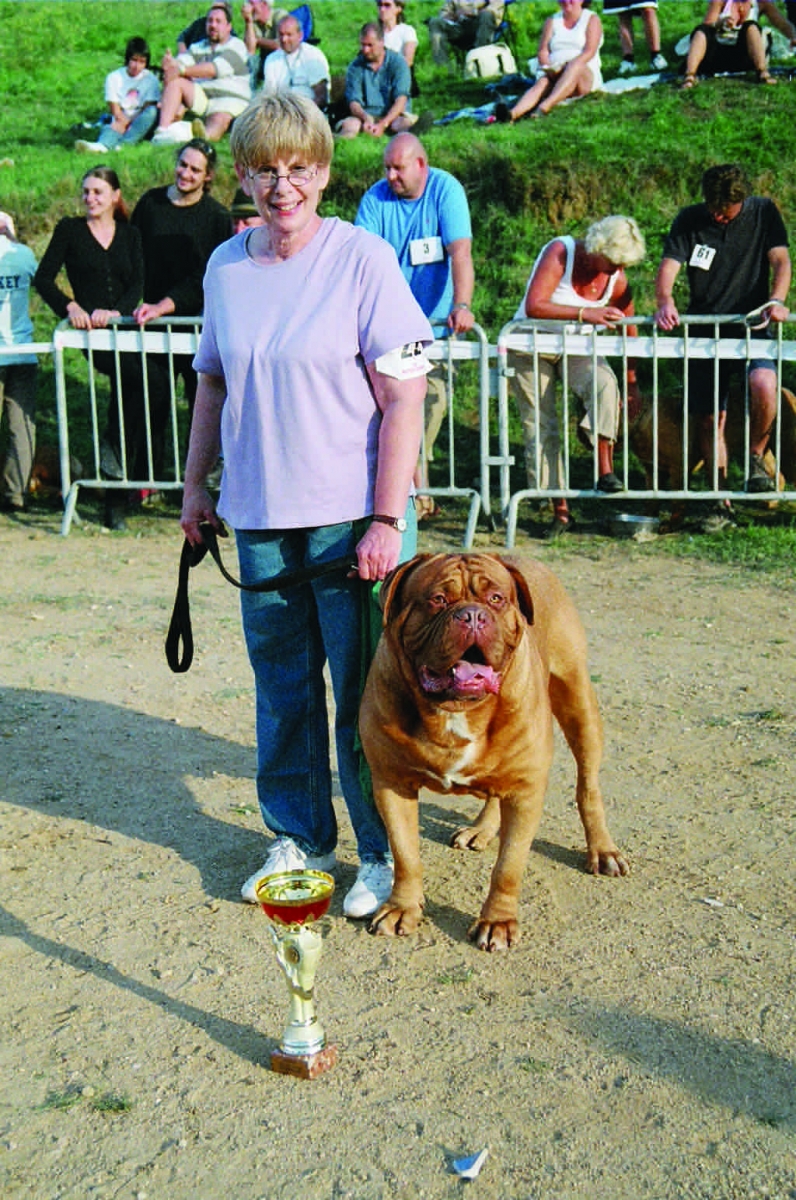 There are many breeds that have been banned in other countries, as well as here in the United States … my biggest fear is that the Dogue will make it to the dangerous-dog list just because of its popularity.
The best piece of advice I can give to the novice breeder is: Be patient, ask questions, and be open-minded. Learn as much as you can about other Mastiff breeds – the English Mastiff, the Bullmastiff, the Neo. Learn what differentiates them from our breed.
Attend Bas Bosch’s seminars; read his articles and his books. Don’t miss out on any learning opportunity that comes your way. Subscribe to publications such as Modern Molosser.
And last, but not least, pay attention to the details.
© Modern Molosser Magazine. This article may not be reposted, reprinted, rewritten, excerpted or otherwise duplicated in any medium without the express written permission of the publisher.
Fri, 03/16/2018 - 12:59pm