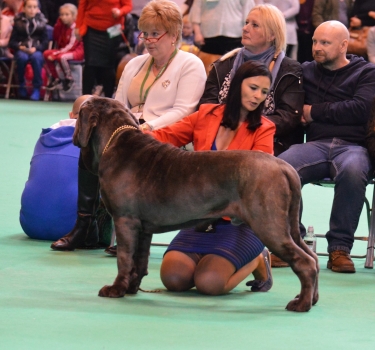 From maligned Mastini to taxidermied Tibetan Mastiffs, a Crufts first-timer shares all
By
Denise Flaim

It was, by anyone’s estimation, a glaring gap on my dog-show resume: I have been a regular at Westminster for years, have abandoned holiday cookie baking in mid-snickerdoodle to make the December pilgrimage to AKC’s flagship show, even traveled as far afield as Bratislava and Billund to experience a World Dog Show.

But I had never been to Crufts.

Part of the problem was timing: Even though it’s only 25 miles from my Long Island doorstep to Madison Square Garden, commuting to Westminster is so fraught with traffic that I invariably decamp for four or five days in a Manhattan hotel. No sooner do I return home from Westminster then a barely a month later it would be time to leave again for a British tour. Not very feasible in a household with three teenagers, three dogs and a tolerant but not yet sainted husband.

But this year presented itself with a sterling excuse: Britain’s Channel 4, which broadcasts Crufts, had planned a video segment on “Little Kids and Their Big Dogs,” a book I had just published. Of course I needed to be there!

The universe complied with a non-stratospheric JFK-to-Heathrow airfare. I was even able to snag a reasonable room at the Hilton in Birmingham – formerly the Metropole – which put me at a ten-minute walk from the cavernous National Exhibition Centre. And – icing on the cake – a trio of friends from Colorado announced that they were popping across the pond, too. One even volunteered to drive us all the hour and a half from London to Birmingham!

Crufts is as big and as impressive as they say: The entry of more than 22,000 dogs dwarfs anything one might see stateside. With Great Britain’s relaxed quarantine regulations, overseas fanciers are increasingly drawn to compete, with this year’s entry the largest foreign contingent ever, representing 55 different countries, including 418 entries from France and 373 from Italy.

The show’s final day included Working dogs, which meant, of course, Molossers. I spent a good deal of time at the Bullmastiff ring, comparing notes with Grant Slater, who had plenty to say about hypertype creeping into his breed. Despite the “gargoyles” (to borrow Raymond Triquet’s pejorative for overdone Dogues), there were still plenty of British-looking Bullmastiffs, which is to say not overloaded with mass or wrinkles. (And that reminds me of another favorite quote, this time from Sherilyn Allen about Neapolitan Mastiffs that have become almost caricatures of their magnificent selves: “More Sparta and less Athens.”)   Speaking of which, after Bullmastiffs I hopped to the next ring to watch Billy Brittle judge Neapolitan Mastiffs; Billy, who has written for us before, comes out of Bullmastiffs, being indelibly associated with Britain’s famous Oldwell Kennel. He gave Best of Breed in Mastini to an Italian import owned by Kim Slater, who has contributed to MM in the past, too. Unlike Billy, I had never met her in person. (And, true to form, Neo legend Uberto Gasche was ringside for Mastiffs, at least, though by the time Mastini came around he had left his seat.)

(As for the requisite controversy -- every dog show has to have it -- that was reserved for the group ring later in the day: Mateaki Mafi showed the winning Neo, Freddo dei Mastini della Rupe, in the Working Group wearing a ta’ovala, which is a mat worn in his native Tonga during special occasions, comparable to a suit and tie in the European tradition. In a stroke of cultural insensitivity, Crufts commentator Jessica Holm called it a “slobber cloth” during the live telecast of the show. And, reportedly, this was the second year in a row that the unfortunate remark had been made made. Holm later apologized.) For my part, I snagged a prime seat dividing the Neo ring from the adjacent one, where Dogues de Bordeaux were being judged by another British Molosser expert, Pamela Jeans Brown. A quick swivel, and I was in two-fer heaven. Yessica Sam-Sin from the Netherlands joined me to share some conversation – and half of her Cornish pasty, too. Now, that’s a friend. Your publisher communing with a century-old Mastiff in the Herteford countryside.
In the end, my visit to Crufts turned out to be much more than an overdue checkmark: It was a chance to meet some long-time friends on their home turf, greet others who up until then had existed only on a computer or smart-phone screen, and watch many breeds in a quantity that stateside is usually only seen at national specialties. To say nothing of the heartily delicious food – from lamb “chump” to the obligatory fish and chips with mushy peas to a delicious dose of curry in downtown Birmingham – and a day trip to the National History Museum in Tring to view its collection of taxidermied dogs, including a few fascinating Molossers.
As for Crufts 2018, I’m already plotting my return.
© Modern Molosser Magazine. This article may not be reposted, reprinted, rewritten, excerpted or otherwise duplicated in any medium without the express written permission of the publisher.
Wed, 03/29/2017 - 8:34am