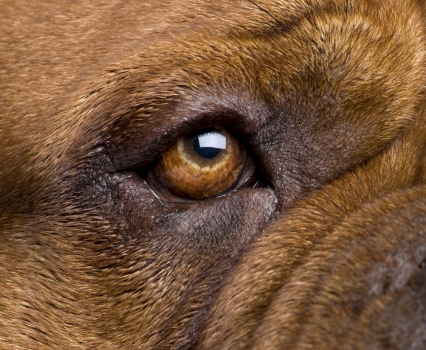 Dogue DNA helps cancer researchers fight back
By
M.J. Hamilton, DVM
In my first year of veterinary oncology residency at Michigan State University, I learned that cancer – in particular, lymphoma – is the number-one killer in my beloved breed, the Dogue de Bordeaux. According to a cause-of-death survey conducted by the Dogue de Bordeaux Society of America in 2001, 29 percent of Dogue deaths are due to cancer, with 36 percent of those cases lymphoma.
Lymphoma is a cancer of the immune system – specifically, cells called lymphocytes. When dogs get lymphoma, these cells multiply uncontrollably, building up in lymph nodes and other organs. This build-up impairs the ability of these organs to do their job, contributing to signs of illness. In many cases, lymphoma grows quickly, resulting in many owners viewing it as occurring almost overnight.
The exact cause of lymphoma is not known; some current genetic studies are aimed at unraveling this mystery. The annual incidence of lymphoma in the general dog population is 13 to 24 cases per 100,000 dogs, with incidence increasing with age: For example, among dogs 10 to 11 years of age, it’s 84 per 100,000 dogs.
Exact statistics for lymphoma in the Dogue de Bordeaux are not known either, as the majority of all cases are not reported to the Dogue de Bordeaux community or the DDBSA survey. Inaccurate breed classification further complicates matters, as some veterinary hospitals simply list Dogues as “Mastiffs,” making accurate national counts difficult. (For this reason Dogue de Bordeaux owners are encouraged to be sure their Dogue’s breed is accurately noted on medical records, as this will make retrospective studies more accurate in the future.)

Searching for a Solution

The first phase of the lymphoma study began with gathering information via an online survey on every Dogue de Bordeaux, past or present, with lymphoma. The data consisted of signalment information (notes on the appearance of the dog), medical history prior to and during lymphoma treatment, and, lastly, biopsy samples used to make each Dogue’s diagnosis. After three years, 10 Dogue de Bordeaux lymphoma samples were obtained, in addition to the 20 owners who filled out the anonymous online survey. Data accrual was certainly slow during this first phase of the study, as it took a while to get the word out to the Dogue de Bordeaux community.

The resulting data from this small, unpublished study suggested that Dogues de Bordeaux get lymphoma at an average age of 4.7 years old. The oldest dog in the survey was diagnosed at 9.8 years old; the youngest was reported to be 1.1 yrs old. Seventy percent of the Dogues in the survey had no history of prior medical conditions. Seventy percent of dogs were treated in some way for lymphoma; the majority received multi-drug chemotherapy. Of the dogs in the survey, 68.4% were American born, with the remainder being imports. None of the participating owners identified themselves as non-U.S. citizens. Male and female Dogues appear equally affected. The lymphoma cell type seen in the Bordeaux appears to be evenly distributed between B-cell and T-cell, based on the samples acquired during the first phase of the study.

The preliminary information gained in this first phase of study caused participation momentum to build within the Dogue de Bordeaux community, and it soon became evident it was time to take the lymphoma project to the next level: genetic research.
To do this, the Dogue de Bordeaux needed to support as well as be supported by a larger entity, with the resources to investigate the genetics of cancer. The Canine Hereditary Cancer Consortium was the group of choice.

The Canine Hereditary Cancer Consortium is comprised of human and veterinary cancer researchers investigating the genetics of five types of cancers common to both humans and dogs: lymphoma, malignant melanoma, hemangiosarcoma, osteosarcoma and histiocytic sarcoma. Their efforts utilize the limited genetic diversity of purebred dogs, in hopes of finding genes associated with cancer faster than would be possible in genetically diverse humans.
Arguably, the Dogue de Bordeaux represents an ideal breed for study, as it has faced multiple genetic challenges over the years. Genetic bottlenecks such as the fusion of the three Dogue varieties (Toulouse, Paris, and Bordeaux) in the late 1800s, as well as scant breeding during World War I, represented the first two genetic limitations imposed on the breed. The third genetic bottleneck was during World War II, where Hitler reportedly ordered the killing of Dogues de Bordeaux due to their vigilant guarding of their families. Hitler’s death decree allegedly resulted in only three postwar breeding pairs remaining. The Dogue de Bordeaux’s genetic history and the VARI’s need for tumor samples was a great opportunity for the Dogue de Bordeaux to contribute to science and be investigated more thoroughly.
The collection and banking of Dogue de Bordeaux DNA began in mid-2009. DNA samples were collected from healthy Dogues in the form of blood or saliva. Since blood has been the gold standard for DNA collection, samples were collected at large Dogue de Bordeaux shows as well as submitted by dedicated breeders nationwide. Furthermore, owners of individual dogs sent in blood samples, having their veterinarians draw a little extra blood at the time of yearly heartworm testing or annual blood work. Dogues with lymphoma submitted blood samples as well as fresh tumor samples, 10 of which have been collected to date for this second phase. All Dogue DNA from blood samples was isolated and banked. The live cancer cells from submitted tumors were grown in cell culture, permitting the legacy of the Dogues to live on, and enabling further analysis.
By the end of 2010, enough Dogue de Bordeaux lymphoma samples had been collected to run the preliminary genetic analysis. Analysis was initially delayed, however, due to a lack of enough unrelated healthy controls for comparison, despite having the DNA of more than 80 dogs banked! A call for additional healthy Dogue de Bordeaux DNA went out, and DNA from 20 more Dogues de Bordeaux was quickly obtained, as study participation has become well accepted. With these new genetic samples, the Dogue de Bordeaux gene chip could now be run alongside the other participating breeds. The data from the genetic analysis are currently being analyzed.
The Dogue de Bordeaux lymphoma study is an example of how a small project on a rare breed can grow and become part of a much large one, aimed at discovering the genetic changes associated with cancer in dogs and humans. Because DNA from all Dogues – healthy and not – is needed by researchers, all owners can be empowered to participate in cancer research, even if their dog is healthy.

Because lymphoma can present in multiple ways, lymphoma is often missed. (And its rapid growth means prompt detection and treatment are necessary.) The classic presentation is an older dog with many enlarged lymph nodes; other dogs present with spleen and liver issues or refractory digestive problems. Owners may note a suddenly decreased appetite, lethargy and weight loss, or dramatic increase in thirst. Additionally, Dogues de Bordeaux are not geriatric by normal dog standards when they get lymphoma, so the disease does not always make the differential-diagnosis list right away. Unfortunately, lymphoma can progress quickly without treatment; the ability to detect changes at home can be a valuable skill.
Lymph nodes are normally bean shaped and located all over the body. They are an important part of the immune system and partially act as a filter, trapping foreign particles for presentation to cells of the immune system as well as a center for lymphocyte growth. During an infection or lymphoma, lymph nodes become enlarged, as they are actively fighting infection or serve as a center for lymphoma growth. Lymph-node size varies by breed, so feeling your own healthy dog’s lymph nodes may help you become familiar with what is normal for your dog. In general, they are the size of a plump lima bean in the Dogue de Bordeaux; anything larger should be further investigated starting with a simple needle test at minimum.
Dogs treated for lymphoma can have their lives extended anywhere from an additional six months to one year. Some of the newer chemotherapy protocols integrating radiation have seen survival times of even longer in some dogs. Thankfully, owners with significant financial restraints do have some treatment options as lymphoma tends to be very sensitive to a variety of drug combinations. Even steroids alone can bring many dogs short-term relief (approximately six weeks). – Hamilton

This diagram points out the location of a few lymph nodes most easily palpated by dog owners. 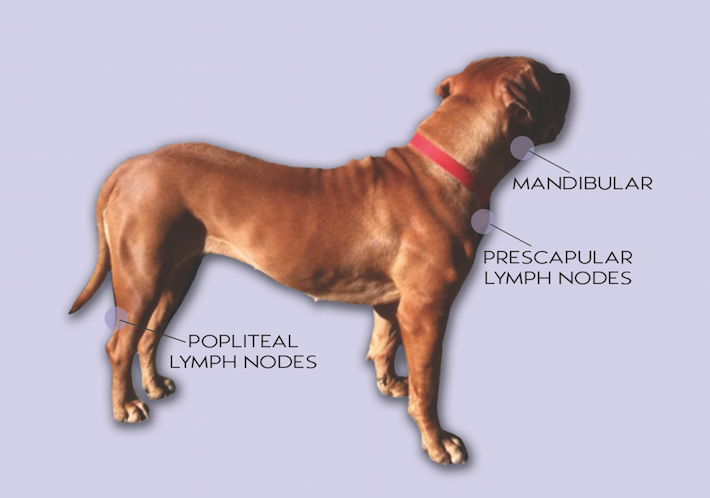 How Healthy Dogs Can Help

There are many programs aimed at furthering canine health research that are accepting DNA samples from healthy dogs. Below are two of them.
• Van Andel Institute’s (VAI) Canine Hereditary Cancer Consortium is soliciting blood and tumor samples from healthy dogs and dogs with cancer for genetic profiling. They are particularly interested in fresh samples of lymphoma, malignant melanoma, hemangiosarcoma, osteosarcoma and histiocytic sarcoma. www.vai.org/helpingdogs
• The Canine Health Information Center (CHIC), co-sponsored by the Orthopedic Foundation for Animals and the AKC/CHF, collects and stores canine DNA samples and corresponding genealogic information to support future research and testing aimed at reducing the incidence of inherited disease in dogs. www.caninehealthinfo.org/dnabank.html
DNA samples for these programs are submitted in the form of blood, which can be drawn by your local veterinarian in coordination with your next heartworm or annual blood work. Most dogs can participate in VAI and CHIC studies simultaneously with just one blood sample, as the sample can be divided into multiple tubes, one for each program.
The web links provide the necessary information regarding consent and shipping. If a blood draw is not possible, VAI can also provide a simple salivary collection kit for home collection.  Contact Roe Froman, DVM, at roe.froman@vai.org for further information and to request a kit.  The kit includes prepaid return-mailing materials. Dr. Froman can also provide tumor collection kits for Bordeaux with lymphoma.
Dogs living with cancer can submit a tumor sample as a lasting gift to future generations of dogs and dog owners. There are many facilities that would be honored to receive a sample of your dog’s tumor to use for research purposes. This sample can be taken by your veterinarian or oncologist at the time of an already scheduled surgery. If a pet living with cancer is not scheduled for a surgery or biopsy, samples can be obtained shortly after their passing. Though the concept of post-mortem tissue donation may be difficult, there should be comfort in knowing that your dog’s legacy can live on and help others. Some dogs may be able to participate in multiple programs, a wonderful gift to science and a lasting memorial to your dog.
The Dogue de Bordeaux Society of America is currently participating in the above programs and encourages owners around the world to join our fight against cancer.
Dogue de Bordeaux owners are free to contact me if they have questions about donating DNA and/or tumor samples at 212-924-3311.  – Hamilton 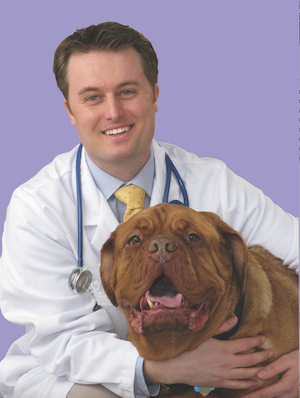 Dr. M.J. Hamilton attended Colorado State University, where he received his Doctor of Veterinary Medicine degree. Following veterinary school, he practiced in Las Vegas for two years, where he developed interests in oncology, behavior and theriogenology. Dr. Hamilton went on to successfully complete a residency in medial oncology at Michigan State University Center for Comparative Oncology. He currently practices oncology at 5th Avenue Veterinary Specialists in New York City.
© Modern Molosser Magazine. This article may not be reposted, reprinted, rewritten, excerpted or otherwise duplicated in any medium without the express written permission of the publisher.
Wed, 10/27/2010 - 9:31pm