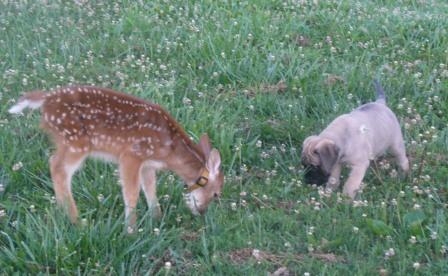 Binky the deer bonds to a litter of Bullmastiff puppies
When Renea Vaughn of Heartsluv Bullmastiffs in Liberty, W.V., agreed to foster a two-week-old male deer, little did she know she’d forge a bond that would transcend species.
“Binky,” as he came to be known, arrived on her 200-acre wooded property around the same time as a litter of Bullmastiff puppies. All the supplies were on hand, Renea remembers, “to help this hungry, dehydrated baby boy with huge, fearful eyes.” 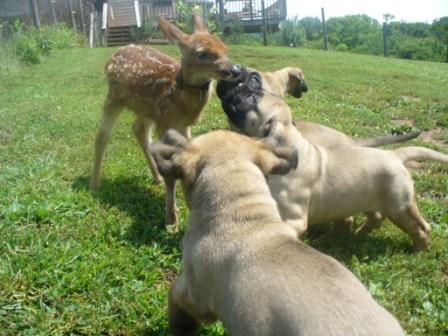 Binky spent his nights in the garage, and his days with the eight Bullmastiff puppies.
“It was a beautiful sight to see,” Renea says. “Different species interacting as though they had always been together.”
That said, some relationships were closer than others. Danna, the dam of the litter, often joined in the play, but her fondness for chase-me games made Binky a little leery. Though all Renea’s Bullmastiffs learned to accept Binky, some were admittedly slower to win over.
Binky’s best friend is Glenda, a mixed breed that Renea found badly beaten, abandoned and starving on a country road. The two are so close that Glenda follows on Binky’s heels and eats corn alongside him. In turn, Binky communicates by offering doggie play behaviors presumably learned from his Bullmastiff buddies.
“Once our puppies found their way to their new homes, Binky began to hear the call of the wild and started on his new adventures of his natural life,” Renea says. “He began sleeping outside, staying close to the house on a hillside by the pond. In the morning he was waiting for us on the front porch, often ‘knocking on the door.’”
Today, Binky is even more confident and independent, running and eating with his wild friends who visit Renea’s pond, which she stocks with cracked corn. Yet he still enjoys following the family around, occasionally popping up unannounced behind them.
“We seem to have imprinted on him forever,” Renea says of her Bullmastiff-reared Bambi. “And he has stolen a piece of our hearts.”
© Modern Molosser Magazine. This article may not be reposted, reprinted, rewritten, excerpted or otherwise duplicated in any medium without the express written permission of the publisher.
Wed, 09/06/2017 - 11:10am