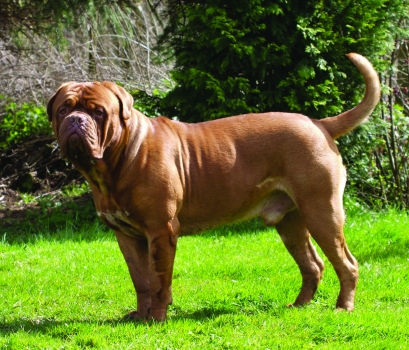 10 Things to Know Before Judging the Dogue de Bordeaux

In the old days, Dogues de Bordeaux were kept for all sorts of jobs: hunting, fighting, guarding, pulling loads. Butchers used them to prevent steers from getting away and to keep them in their places. Butchers also used them for pulling loads of meat from the slaughterhouse to their shops. During the First World War, some Dogues de Bordeaux helped to drag injured people to safety. Another task given to them was hunting animals such as boars. They have always been protection dogs.
All this means that the Dogue de Bordeaux must be fit. Soundness is essential. Stocky, athletic, imposing, they have a deterring aspect, but a golden heart, and they are very affectionate to their masters.

The Dogue has a massive body that is rather low to the ground. It is slightly longer than tall at the withers. The height at the withers is 58 to 66 centimeters (23-26 inches) for the bitches, 60 to 68 centimeters (23 1/2-26 3/4 inches) for the males with a weight of at least 45 kg (99 pounds) for bitches and 50 kg (110 pounds) for the males.
The Dogue has a wide front and well-muscled straight forelegs and its hindquarters must also be suitably powerful, though narrower. It has a typical concave outline. The withers are “well marked,” the distance from the sternum to the ground being slightly less than the depth of the chest.

The head has a trapezium shape.  The stop is very pronounced with a deep frontal groove. The head is furrowed by symmetrical wrinkles, but these wrinkles must not be too deep and they must stay mobile, or living. The ideal muzzle/skull ratio is between one third and one quarter. The undershot jaw is characteristic of the breed. The eyes are oval, set wide apart. Temporals, supra-orbital arches, zygomatic arches and spacing of the branches of the lower jaw are well developed. The upper region of the skull is slightly convex from one side to the other.

In profile, the bridge of the nose is very slightly concave, and the line from the nose to the mouth outwardly curved. A straight bridge as well as an upturned nose is not ideal.
From the front, the upper lip resembles an upside down V, which should not be too acute or too curved like a U. The former would look like a Neapolitan, the latter like a Bulldog.

Over-wrinkled Dogues or Dogues with too pendulous flews are not desirable. The palpebral fold is not Bordeaux (it is typical of the Neapolitan) and must remain minor. So, in particular, exhibitors must not draw the collar to the front when showing.
The underjaw is wide, and the teeth normally sized – not too small, as it is sometimes seen.

Dogues need bone and substance associated with a firm construction. The feet can be slightly turned out. The ribs must not be flat (no straight lines in the Dogue). The standard says : “a very muscular body yet retaining a harmonious general outline.”

Regarding the topline, let’s listen to Raymond Triquet, who wrote the 1971 and 1995 standards as well as the recent modifications and who is probably the most famous personality in the French dog world:
“In the Dogue de Bordeaux, the back never slopes down to the rear (it would be against its nature). The topline is never perfectly ‘straight’ in a mathematical meaning, nor is it horizontal. At best, after the ‘dip’ behind the withers, the line rises insensibly to melt into the slightly arched loin. This is what we call a ‘well-sustained’ topline. In one word the topline is as straight as possible in a concave-lined dog.”

A good reaching movement will be achieved by well-angulated hindquarters, which ensure that the dog is propelled forward from the rear rather than pulled along from the front. When the Dogue moves, the body goes to the front and the head tends to drop. It is absurd to try to put the head up when showing a Dogue de Bordeaux.

What else? The hindquarters are well angulated, but must not be too acute. The Dogue is more angulated in the rear than its cousin the Bullmastiff. The Dogue’s shoulder is well angulated and mobile and rather overloaded.
The tail must be supple, thick at the base, reaching the hock. The coat is soft.

The Dogue’s features may appear spectacular but must be suitably well balanced. No exaggeration in wrinkles keeps the eyes clean. A typically concave-lined dog, which means no straight lines in the head (no flat skull), “no perfectly straight top-line but a well-sustained top-line.”
The Dogue must be “fit for function.” The standard says: “a very muscular body yet retaining a harmonious general outline.”

Anne-Marie Class is the long-time president of the Bullmastiff and Mastiff Club in France, and committee member of the French Kennel Club. As an FCI judge, she is qualified for various Molosser breeds, including the Bullmastiff, Mastiff, Rottweiler and, of course, the Dogue de Bordeaux, which she has judged at specialty shows around the world.

© Modern Molosser Magazine. This article may not be reposted, reprinted, rewritten, excerpted or otherwise duplicated in any medium without the express written permission of the publisher.
Fri, 03/30/2018 - 11:55pm